NEW ERA – He’s the guy who recruited Tom Brady to play football at the University of Michigan.

To be sure, Bill Harris has countless connections to the Michigan football program, and worked with a lot of famous

players and coaches over 14 years in Ann Arbor.

He played for Bo Schembechler during the legendary coach’s first two years at U-M. He was a starting wide receiver in Michigan’s legendary upset of No. 1 ranked Ohio State in 1969. 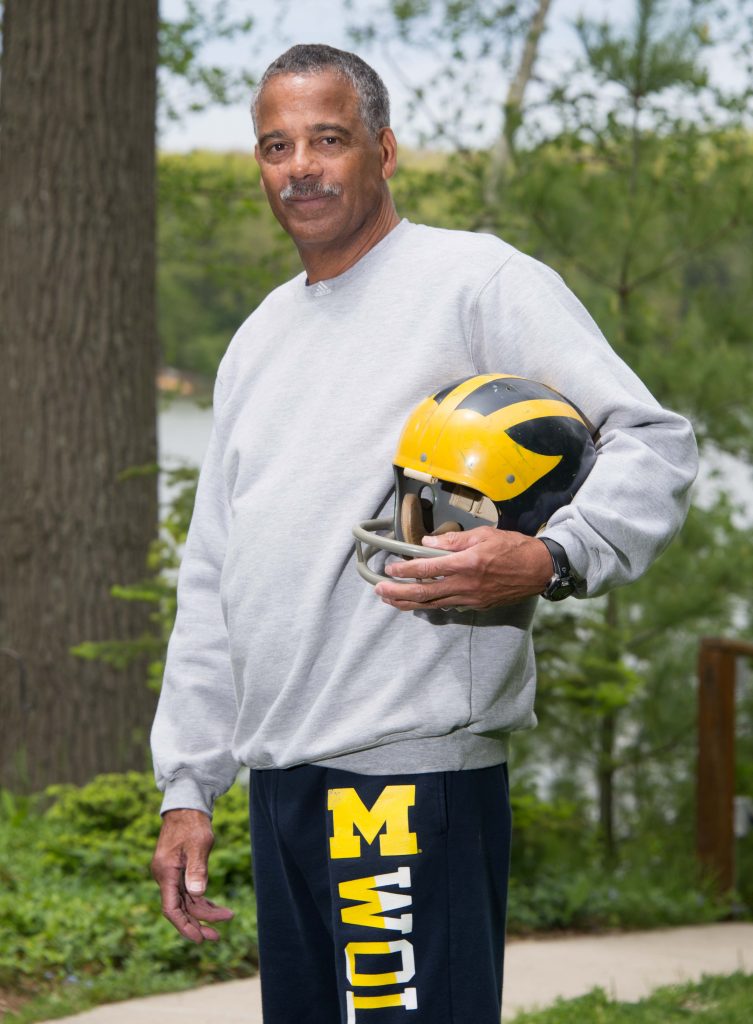 He later coached under Schembechler and his successor, Gary Moeller, and served alongside Lloyd Carr and Les Miles on the Michigan staff. Jim Harbaugh was the Wolverines’ quarterback during Harris’ first season of coaching.

But his greatest claim to fame was the recruiting effort that made Brady a Wolverine.

“Every college coach has a recruiting area,” said Harris, 69, an Oceana County resident who will be the featured speaker at the Local Sports Journal  Golf Outing on June 2 at Oakridge Golf Club. “I happened to have the west coast, and Brady was from San Mateo, California.

“Brady’s high school coach had sent us some film of him playing. It ended up on my desk, I liked what I saw, I showed the quarterback coach and Gary Moeller, and they liked it.

“I went out there (to California) to meet this young man. I saw that he was 6-4, and the coach told me he also played baseball. I’m assumed, because of his throwing arm, that he must be a pitcher, but then I found out he was a catcher. From what I know about baseball, if you’re a catcher you must be a pretty tough nut. I figured this kid must have a little toughness to him.

“So I met Tom, we had an opportunity to bring him to Ann Arbor, and we convinced him it was the place to be.”

Harris said he quickly recognized qualities that Brady had in common with Harbaugh, who was an NFL quarterback by then.

“I got to be around (Harbaugh) a lot, and he was always striving for perfection,” he said. “Getting to know Tommy, that was one thing that everybody out there – parents, coaches and teachers – would talk about, that he had a drive to be the best at whatever he did.”

Harris recalls the phone call from Brady, in February 1995, that sealed the deal.

Ironically, Harris recruited Brady to Michigan after he had coached his final season at Michigan. He moved on to coach at Stanford University in the 1995 season, and was not on staff when Brady joined the team.

But before moving on, Harris struck up a friendship with Brady and his parents, which endures to this day.

When Brady came home from college to visit his family, Harris, then working at nearby Stanford, would often join him and his father for golf. When Harris left Stanford to take a coaching job at Eastern Michigan University, his wife stayed with Brady’s parents for about six months, before she joined him in Ypsilanti.

When Harris’ daughter was married in Ann Arbor, Brady attended the wedding and reception.

“A few years ago, when we went out to New York and saw Tom play, we met up with him and he introduced me as the man who brought him to Michigan,” said Harris, whose son-in-law, former Michigan standout Corwin Brown, was an assistant coach with the New York Jets at the time.

Harris’ connection to the Michigan football program dates back to the 1960s.

He graduated Clintondale High School in Mount Clemens, Michigan in 1966, and was recruited by both Michigan and Michigan State. 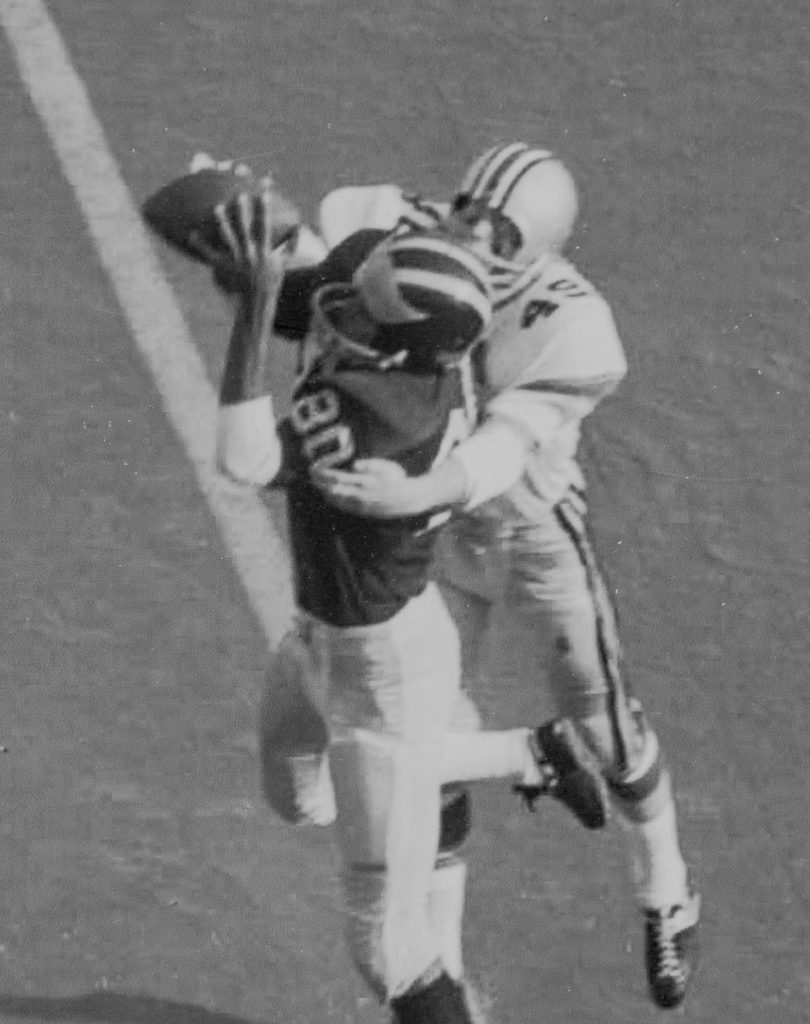 Harris catches a pass during Michigan’s 1969 upset of No. 1 ranked Ohio State.

He said he chose Michigan after visiting both schools and meeting the football players.

“All those guys (at Michigan State) did was party, and I was not exactly a party animal,” Harris said. “At Michigan all the talk was about academics and chilling. I just knew they were more like me.”

Harris played at Michigan from 1966 through 1970, spending his first season as a redshirt freshman. He was a starting wide receiver for two full seasons and part of a third.

He was there when Schembechler came on board in 1969 to replace Elliott as head coach.

He said Schembechler’s reputation for being an intense and demanding coach was completely accurate.

Harris remembers one instance when Schembechler blamed offensive lineman (and current U-M football radio broadcaster) Jim Brandstatter for missing a block during a game that resulted in a blocked punt.

“At practice after that, Bo chased down Brandstatter and kicked him in the butt for missing that block,” Harris said. “Then Jerry Hanlon, the offensive line coach, informed Bo that Brandstatter was not the one who missed the block.”

Harris recalls being the target of Bo’s wrath once or twice himself.

“I remember one time in practice, the quarterback threw me a little pass that I should have caught, but I dropped it,” he said. “Bo let me know, in no uncertain terms, that that was unacceptable, and if I kept it up I would not be playing for Michigan.”

The highlight of Schembechler’s first season in 1969 was Michigan’s shocking 24-14 upset of undefeated and No. 1 ranked Ohio State. Harris started in that game, and remembers it as the high point of his college career.

“Particularly after the year before, when they beat us 50-14,” Harris said about the joy of beating the Buckeyes. “When Ohio State scored its last touchdown in that game, Woody Hayes put his first-team people back in there and went for two points (on the conversion). They got it and ended up scoring 50 points.

“After the game the reporters asked Woody why he went for two, and he said it was because he couldn’t go for three. The next year, when Bo came in, he put a sign up on everyone’s locker that said ’50-14.’ That got everybody a little lathered up to play them again.

“Ohio State had not been beaten in like 2 ½ years. They were fat and happy, so when we beat them we were pretty happy.”

“He called me and said, ‘Dad, I knew you played in that game, but I didn’t know you were a starter,’” Harris said with a chuckle.

The upset victory earned the Wolverines a berth in the 1970 Rose Bowl against USC. But the team played with a heavy heart, after learning that Schembechler had suffered his first heart attack the night before the game.

“Right before we got on the bus to go play the game, (assistant coach) Jim Young told us that Bo had a heart attack the night before, and then all these guys were crying and feeling bad. That was not the best way to get ready to go win a game.

“We ended up losing 10-3. I had a chance to catch a ball in the end zone and it rolled off the tip of my fingers. I could have tied that game up.”

To make matters worse, Harris suffered a knee injury in the Rose Bowl that all but ended his playing career. He suited up for the 1970 season, but did not play.

Schembechler gave him a final honor in the final game of the 1970 season, at Ohio State.

“He wrote my name down as a starter for that game, so I was announced as a starting wide receiver, even though I couldn’t play,” Harris said. “Bo was real nice about it.”

He spent time as an assistant at Grand Valley State University, Western Michigan University, Dartmouth and the University of Washington, under legendary head coach Don James.

In 1984 Washington visited Ann Arbor and beat the Wolverines at the Big House. Not long after Harris visited U-M and Schembechler summoned him to his office. 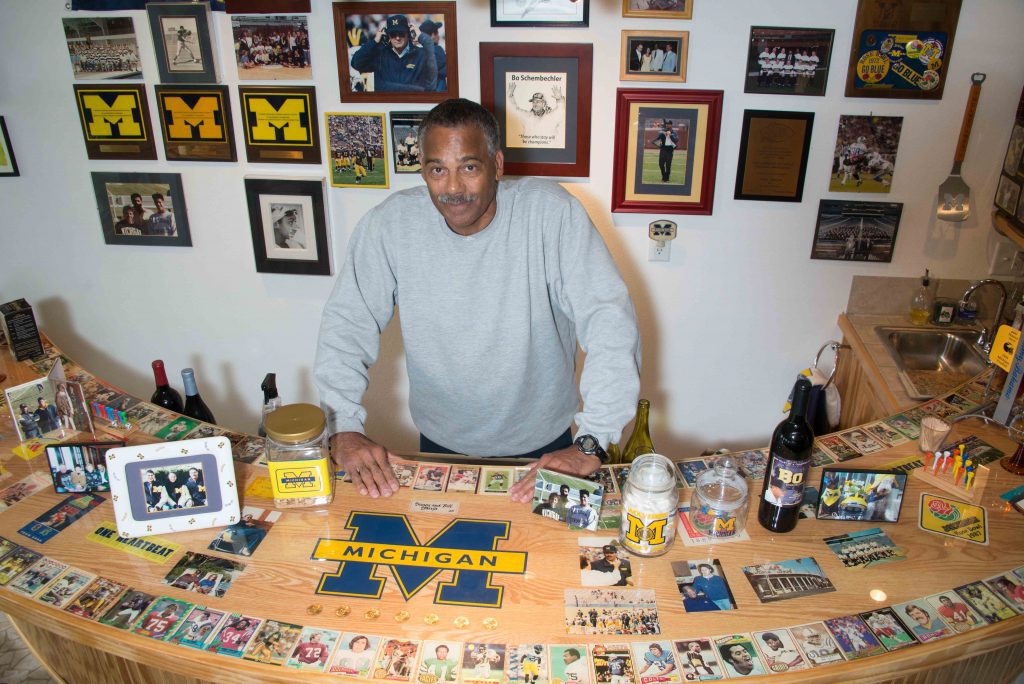 Harris in the basement of his New Era home, with his U-M  memorabilia collection. Photo/Marc Hoeksema

“He said he was going to be making some changes, and that I should come and join the staff,” Harris said. “I said I had a great job at Washington, and Don James was treating me well, but he said ‘No, no, you need to come back home.’”

So that’s what Harris did.

“This was 1986, Jim Harbaugh was the quarterback, and we ended up winning the Big 10 and going to the Rose Bowl,” Harris said of his first season on the U-M staff.

Harris spent that first season as the receivers coach, then became the defensive backs coach.

Schembechler retired after the 1989 season. Harris stayed on under the new head coach, Gary Moeller, for the next five seasons.

His experience at Michigan led to the job as defensive coordinator at Stanford, from 1995 through 1998. He said the team had limited success during his time there.

“Our only claim to fame is that we beat Michigan State, under Nick Saban, 38-0 in the Sun Bowl,” Harris said.

Harris’ last college coaching stop was at Eastern Michigan University, from 2000-2003. He served under head coach Jeff Woodruff, whom he had worked with at Washington.

“I spent three years at Eastern, and we all ended up getting fired,” Harris said about coaching at a school with a long history of football futility. “We thought we had the answer, but we didn’t. The coaches before us got fired, we got fired, and the coaches after us got fired.”

In the years since he left U-M, Harris has watched with pride and amazement as Brady, his prize recruit, went on to win five Super Bowls with the New England Patriots, and become one of the greatest – and perhaps the very best – quarterback to ever play the game.

Brady was good at Michigan, but showed few signs of developing into the superstar he’s become. Harris said that was because he never had the chance to play every game on a consistent basis.

“Brady was recruited under Gary Moeller, then Lloyd Carr went out and recruited Drew Henson, who was the number one high school player at the time,” Harris said. “Tommy took over as quarterback, then the next year Lloyd opened up the quarterback position for competition. He wanted Drew to play and not leave and go to the Yankees (who had selected Henson in the Major League Baseball draft).

“If Lloyd had done what other coaches did, and let his starting quarterback remain the starter unless he stopped winning, (Brady) would have had the chance to show what he had. But we never got the chance to see it.”

Fruitport bounces back with a close 22-21 win over Coopersville 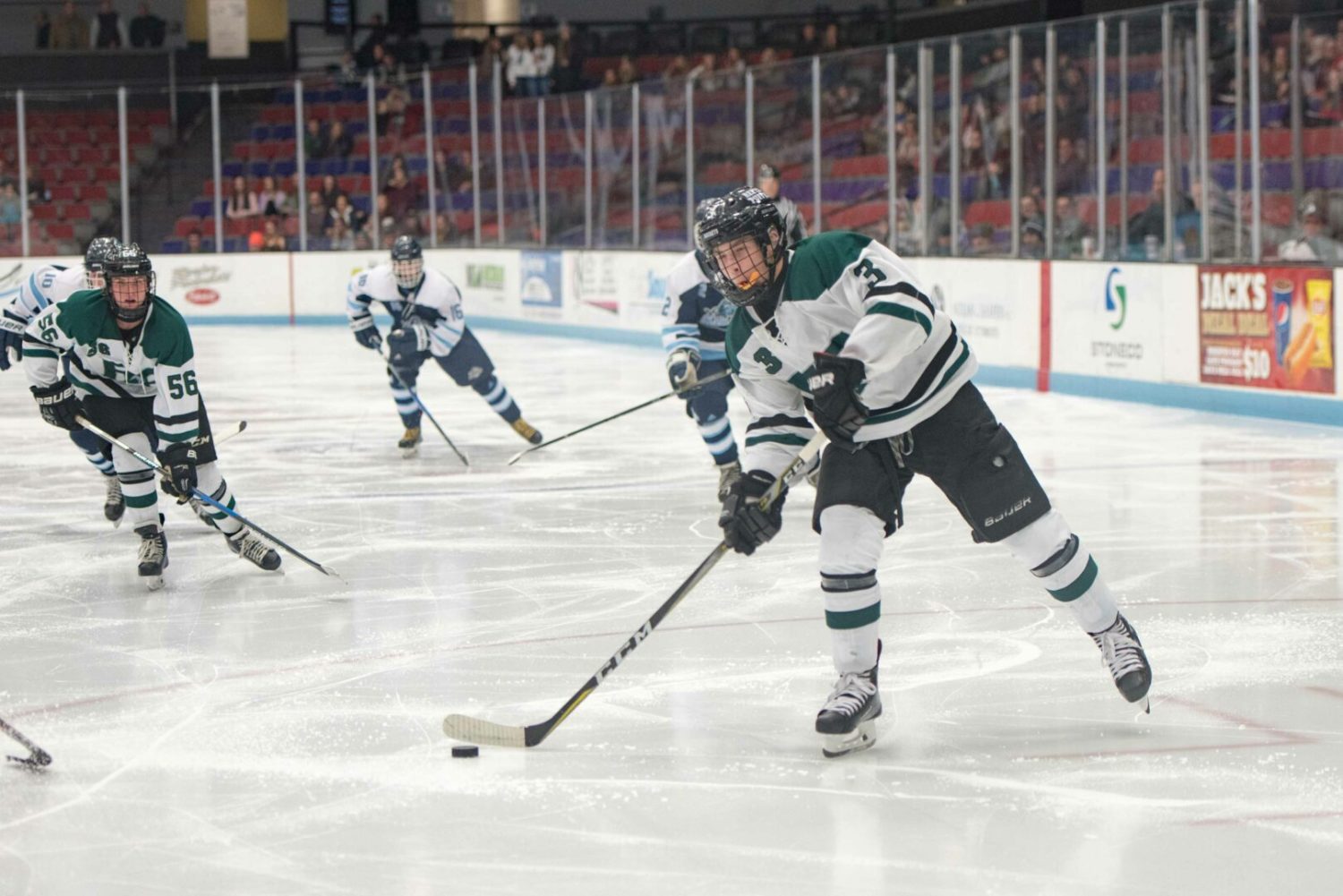 Muskegon Heights falls to Carson City-Crystal on the road