Last year Dew had everyone buzzing again when she surpassed the school career home run record of 12, then tied her own single-season record with by finishing with another eight. 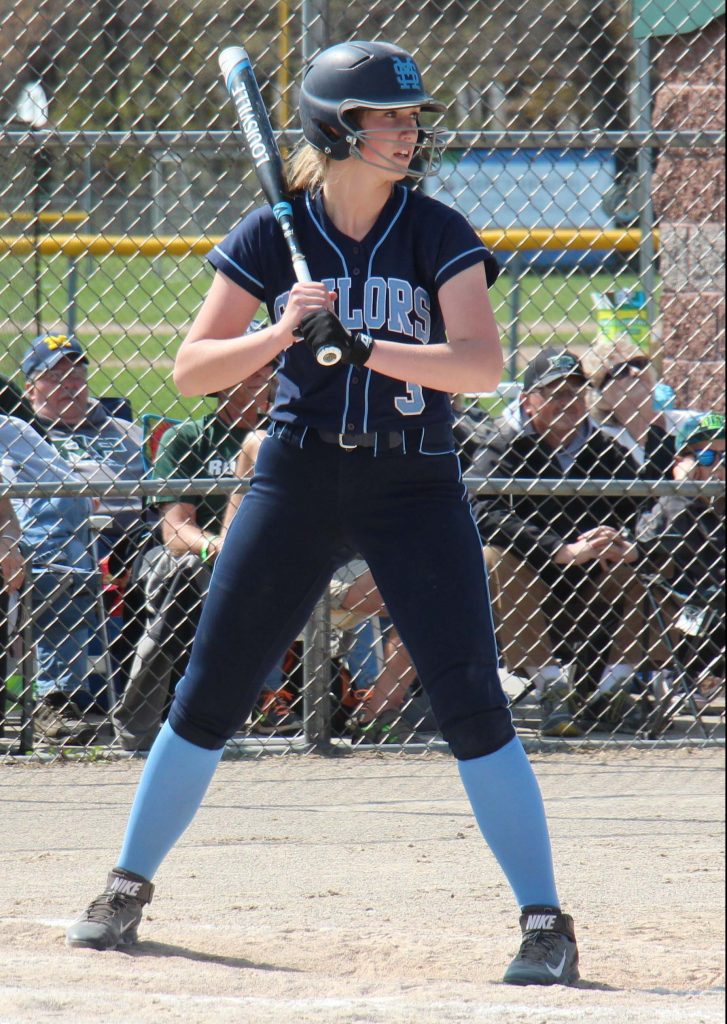 As it turns out, Dew was just warming up.

Dew, 6-1 first baseman who is nicknamed “Mountain Dew” for her height, has already belted 16 home runs as a junior this spring, matching her output from her freshman and sophomore years combined.

Suddenly she’s in hot pursuit of the state of Michigan’s single-season softball home run record of 20, set in 2016 by Abby Krzywiecki of Farmington Hills Mercy.

Dew’s 16 homers have come in 29 games this season. The Sailors have at least nine games remaining, so she will definitely have the opportunity to match, or perhaps surpass, the state record.

The Sailors’ next two games are in Holland on Thursday.

“It seemed like she was hitting at least one home run every doubleheader we had. It was like ‘wow.’”

Dew said she first looked up the state single-season home run record with her dad when she was a freshman, just out of curiosity. It was 18 at the time. She said she looked again several weeks ag0, and is excited by the possibility of matching or topping it.

“I would definitely like to accomplish it if I can,” said Dew, 17. “But I can’t think about it like it’s something I need to do, because I’ll probably mess it up. I’ll swing too hard.”

With 32 career homers so far, and a year of varsity softball left, Dew also has a shot at the state career home run record. That mark is 49, set by Erika Underwood of Addison High School between 2012 and 2015.

Dew said she was not aware she was in range of that record.

“Maybe I could get to it by end of my senior year,” she said. “That would be sweet.” 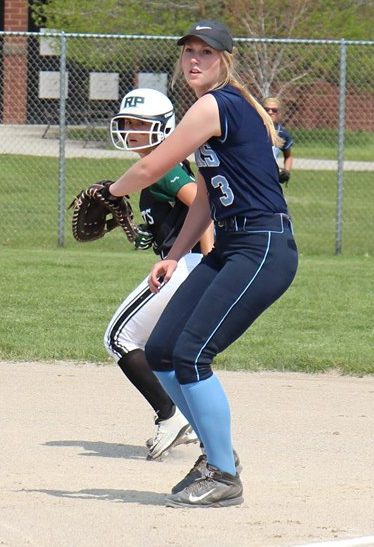 Taylor Dew holds a runner on at first base. Photo/Jason Goorman

Dew is turning out be the Babe Ruth of local high school softball – a sport that is not traditionally known for having a lot of home runs.

Sometimes Dew is just trying to put the ball in play, but it still ends up going over the fence, Crago said.

“A few times they have just been pop flies that didn’t happen to come down on this side of the fence,” the coach said. “She’s a super nice kid. She doesn’t look like she would want to hurt a fly, but when she gets in the batter’s box she’s something else.”

Dew says her personal training has helped her develop into a power hitter over the years.

But how do you explain 16 home runs so far this season, twice as many as her previous two seasons?

“In her first two years she did nothing but pull the ball,” Crago said. “All 16 home runs her first two years were to left or left-center. She didn’t hit one the other way. Bur she worked on that a lot in the offseason, and in our first scrimmage this year she hit one to right. She has seven homers this year to right field.

“Now she’s covering the whole plate with power. She made that adjustment.”

After two seasons of watching her pound home runs, opposing pitchers got wise and started giving her fewer fat pitches to hit. But Dew has countered by learning to hit the type of pitches that she used to pass up.

“I hit more outside pitches now,” she said. “I used to let them go by, but I’m more comfortable now. I know I’m capable of hitting them.”

Sometimes power hitters are overly focused on clearing the fence, and strike out a lot because they swing too hard.

That’s not the case with Dew. She’s hitting a healthy .440 this season, with lots of singles and doubles mixed in with the homers.

With that kind of production, Dew knocks in a lot of runs. She has 53 RBIs this season, one short of the single-season school record. She has 142 career RBIs, putting her within range of the career school record of 200.

One reason she’s able to knock in a lot of runs is because she hits behind teammates Ryleigh Wehler, who’s batting .487, and Veronica Kastelic, who’s hitting .505. They obviously get on base a lot, giving Dew many opportunities to bring them around.

“Ronnie (Kastelic) barely ever strikes out – she’s so consistent – and Ryleigh is so fast that she can beat out just about anything,” Dew said. “They do their jobs, so I want to do mine and bring them in.”

Mason County Central, North Muskegon each get a win in a conference baseball doubleheader