The MAC gives recently-graduated seniors from throughout West Michigan the opportunity to showcase their talents one last time, and allows them to become eligible for scholarship funds from the WF Foundation, which produces the game. 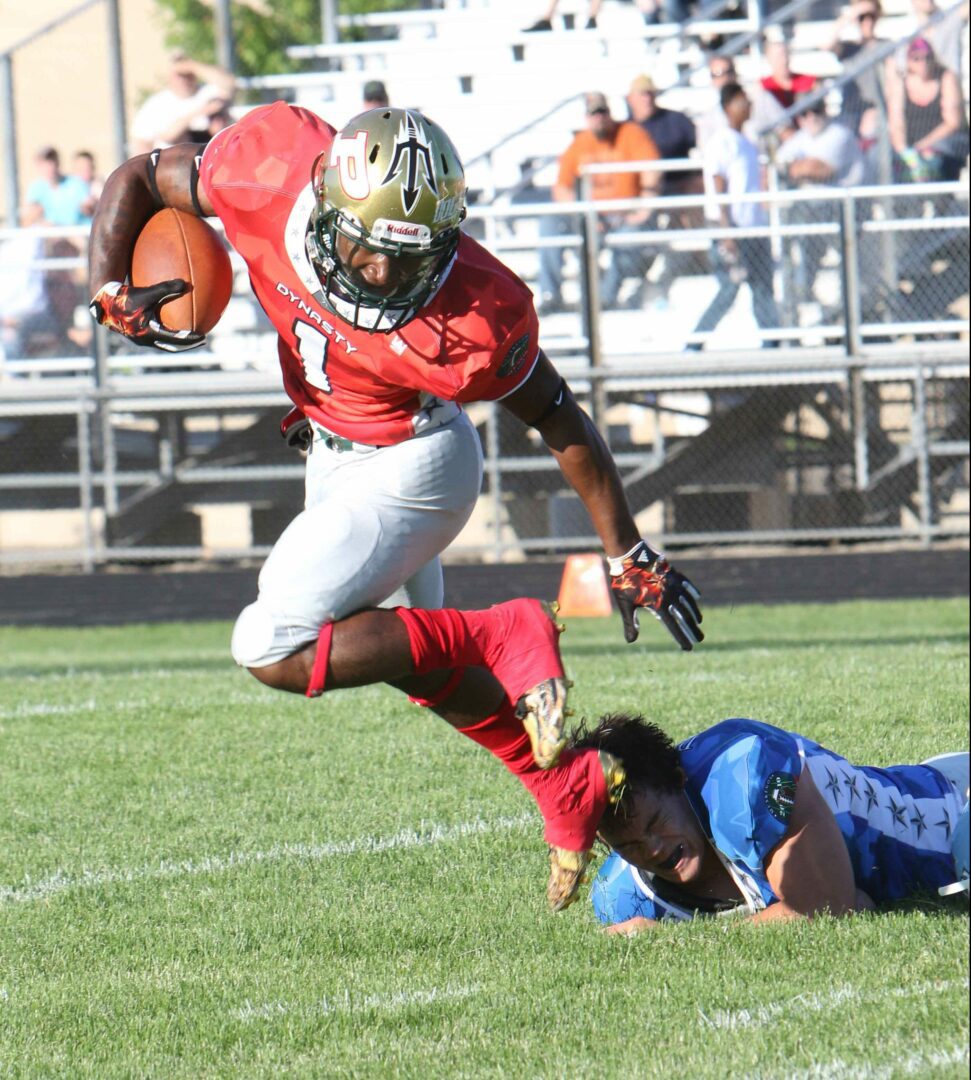 The players selected for the game are split into two teams through a draft process. and sometimes old high school teammates end up locking horns.

This was the case for Muskegon Catholic running backs Logan Helton and Walker Christoffersen, who were key players in the Crusaders’ run to a fourth straight Division 4 football title last year.

Helton scored on a 55-yard run and rushed for about 100 yards in the game to help Team Dynasty snap a four-game losing streak with a 35-17 victory.

“It was a great experience to be able to come together as a community with all new teammates and learn a new system,” said Helton, who will continue his football career in Florida at Ave Maria University in the fall. “It was really fun playing against old teammates, because you can smack talk each other. It was also great to get to know new teammates who you hear about on the news.”

Despite being on the losing team, Christoffersen also enjoyed his last chance to play in front of a Muskegon high school football crowd. 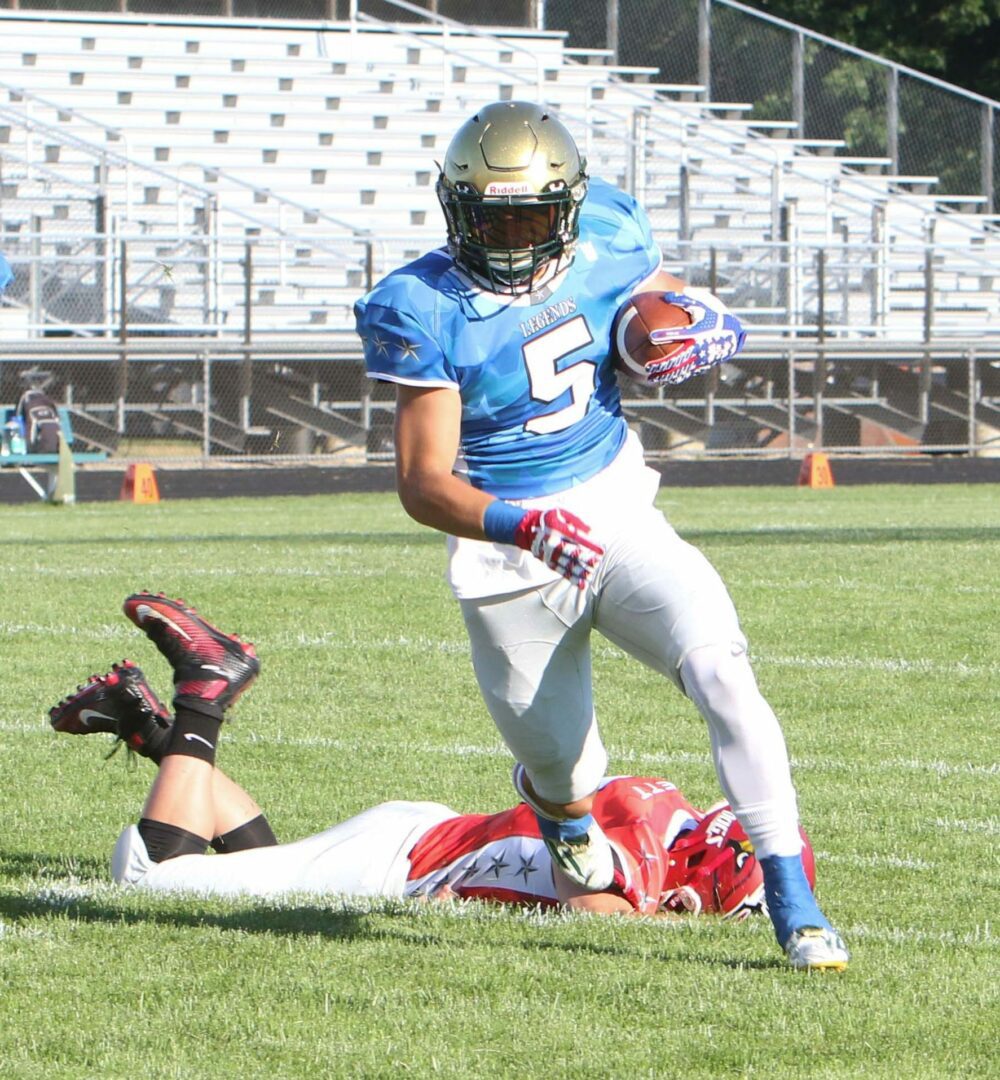 “We got that early touchdown, but on offense we couldn’t get moving after that,” said Christoffersen, who scored the first touchdown of the contest. “It feels really good (to just compete in the game). I can’t thank the community enough for being behind us all throughout our high school careers.”

Christoffersen will continue to play at the running back position for Saginaw Valley State University in the fall.

The Dynasty squad gained an edge by scoring twice on defense, on a 30-yard interception return by Grant’s Ian Francisco and 25-yard fumble recovery and return by Reeths-Puffer’s Theo Stevenson.

Stevenson, who will play football at DuPage University near Chicago in the fall, said it was important for him and his new teammates to break the Dynasty losing streak.

“It was fun being out there with everybody,” said Stevenson. “We all clicked and the whole team knew about the losing streak, and it felt really good to win.”

Christofferson opened the scoring on a four-yard run for the Legends squad with 10:41 left in the first quarter after Andrew Shulte, another Muskegon Catholic Crusader, recovered a fumble. 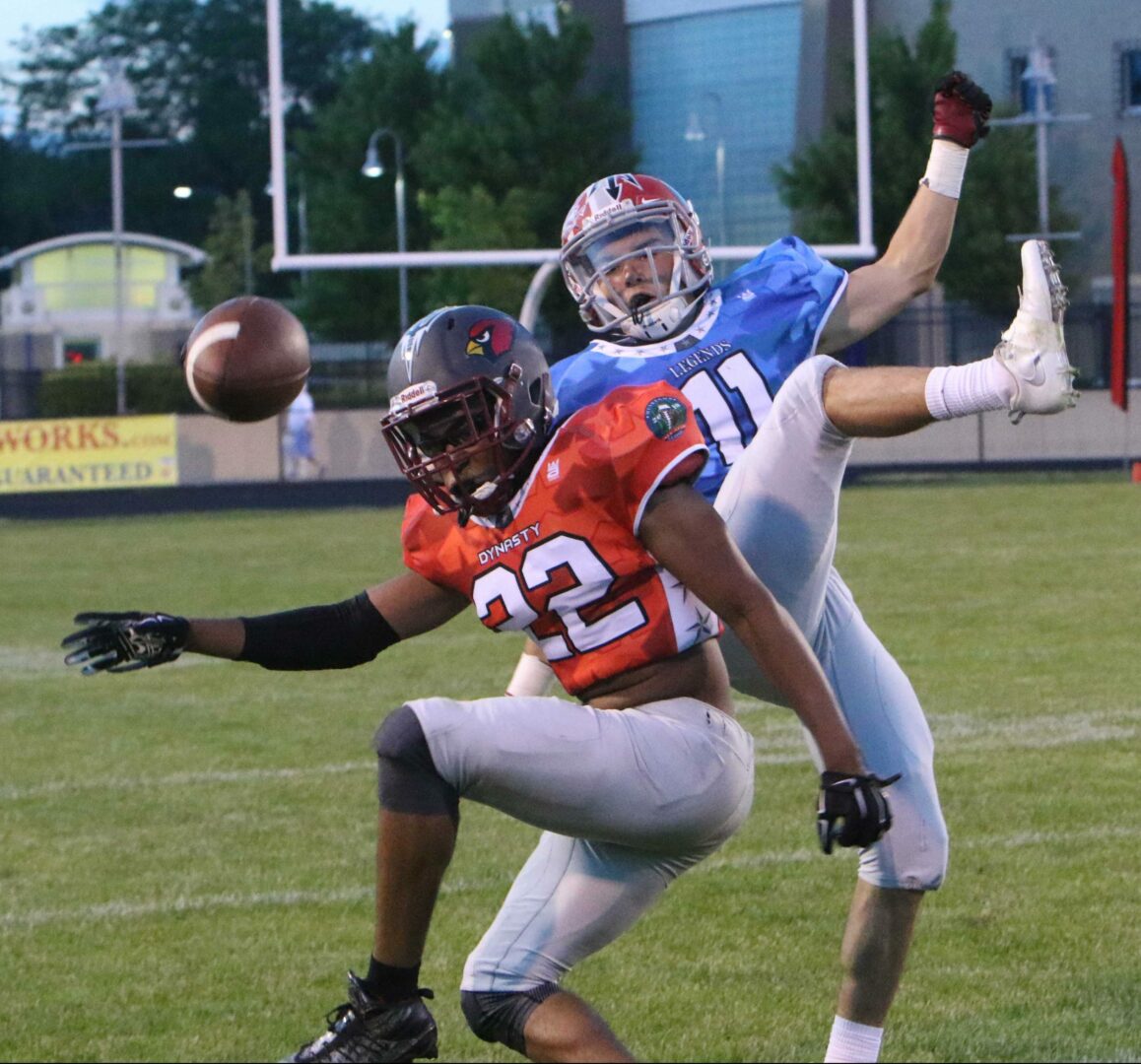 Orchard View’s No. 22 TJ Boykin breaks up the pass to Spring Lake grad and the Legend’s No. 11 Cameron Ball. Photo/Joe Lane

The Dynasty squad responded by scoring the next 17 points in the second quarter, highlighted by a 36-yard touchdown catch by Muskegon’s Kevin Reynold’s from quarterback Tai Allen of Manistee.

The Dynasty squad clinched the victory by outscoring the Legends 18-7 in the third quarter.

Stevenson recovered a fumble and took it 24 yards for a touchdown while Helton scored his lone TD from 55 yards out on the final play of the third.

“It’s about the players,” said Orchard View Coach Joe Tanis, who led the Dynasty squad to victory. “I thought we drafted really well and put a lot of time into watching film, and they played well.” 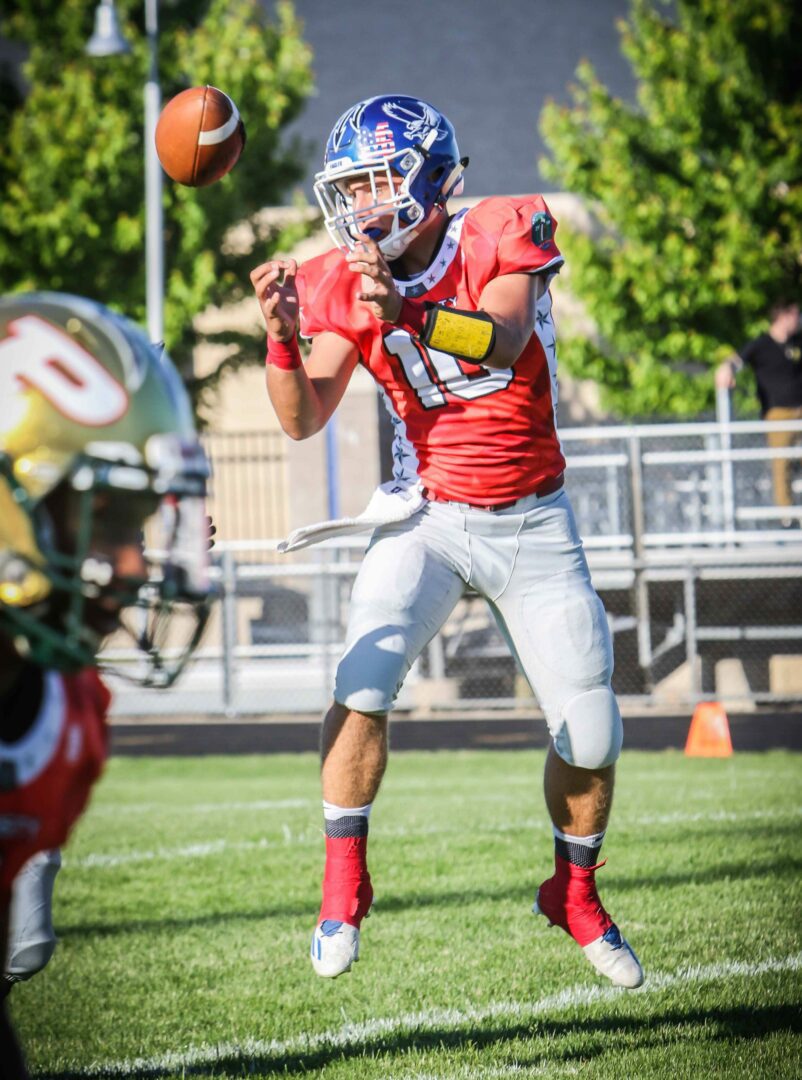 Oakrdige’s Brady Luttrull looks to make a on the ball for the Legends. Photo/Joe Lane 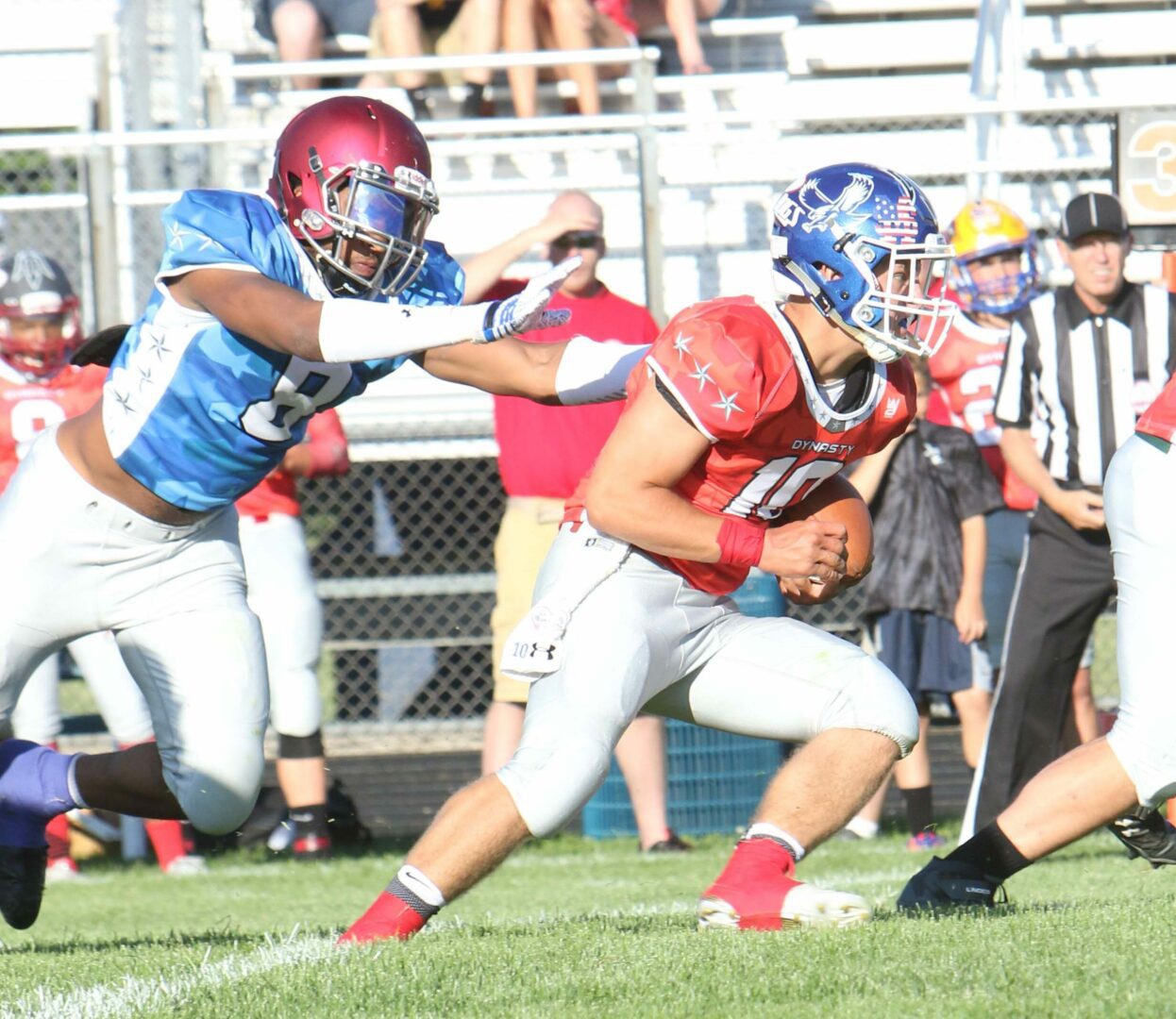 Oakridge and Dynasty QB Brady Luttrull looks to get away from Muskegon Big Red grad No. 8 Derek Spann. Photo/Joe Lane 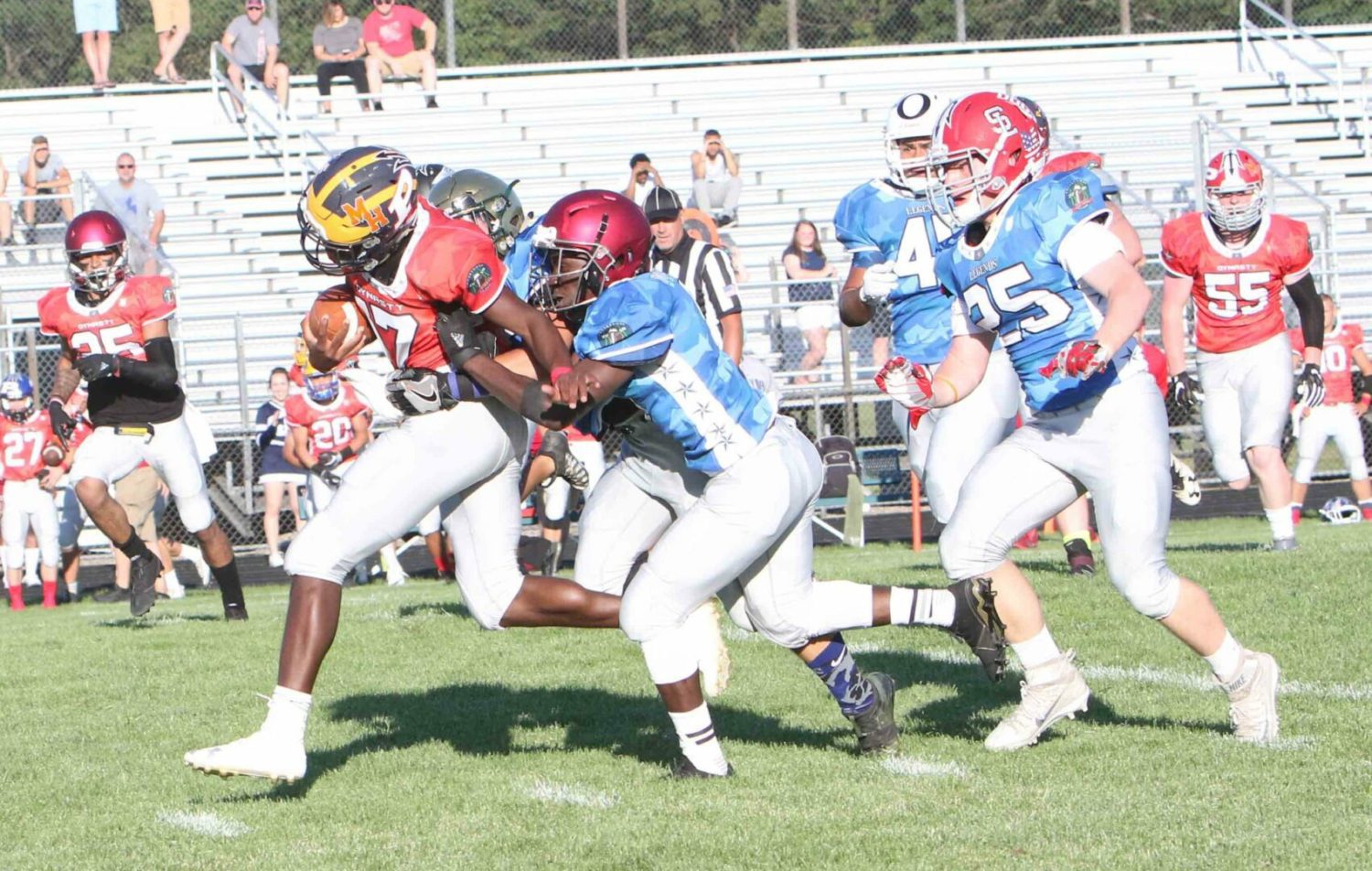 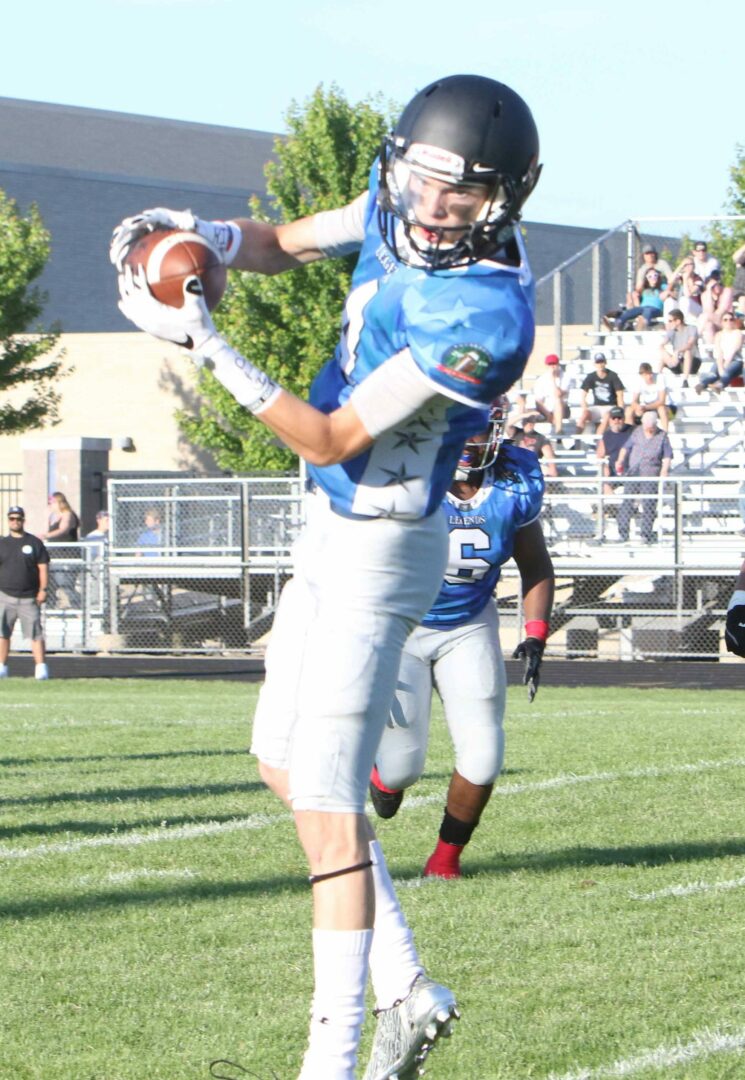 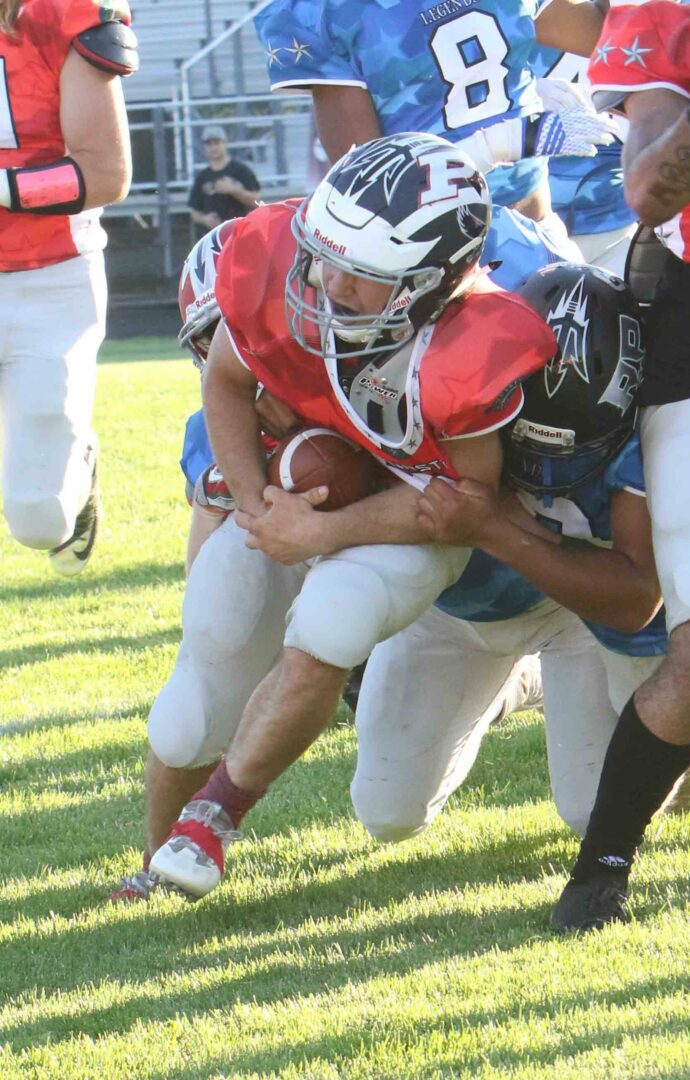 Fruitport’s Levi Six holds on to the ball as he gets tied up on the Dynasty rush. Photo/Joe Lane 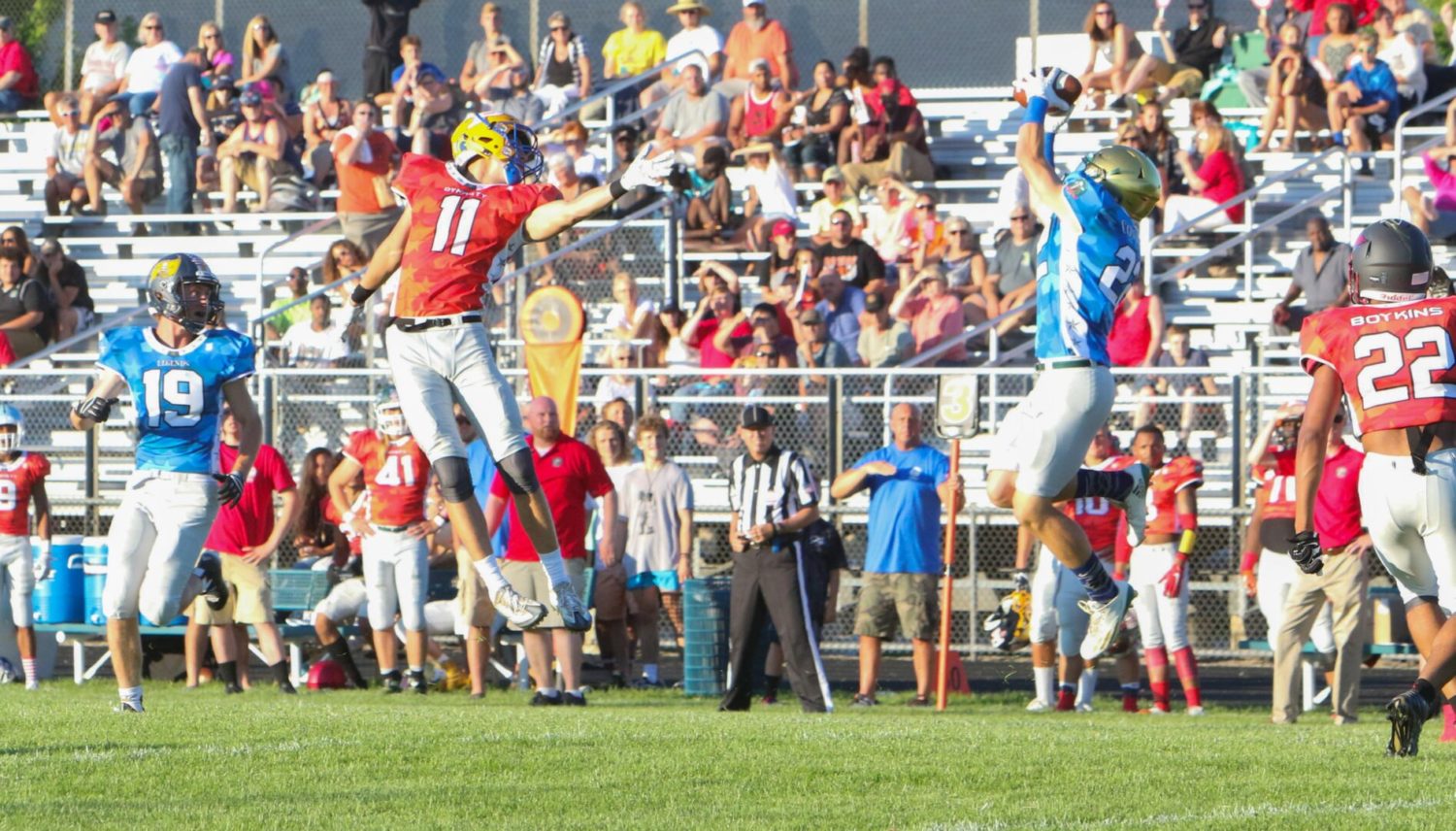 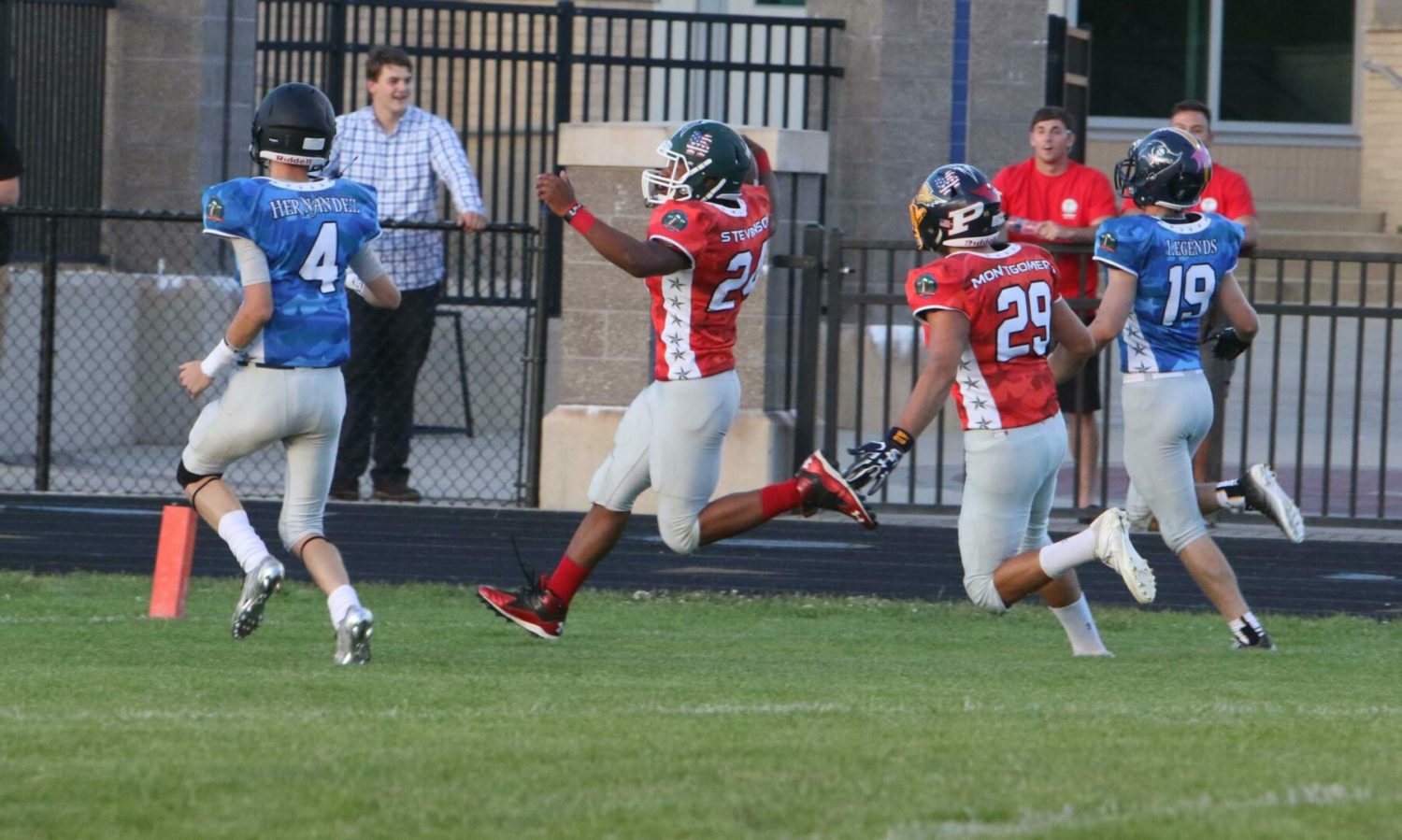 Reeths-Puffer’s Theo Stevenson gets in a pretouchdown celebration for the Dynasty. 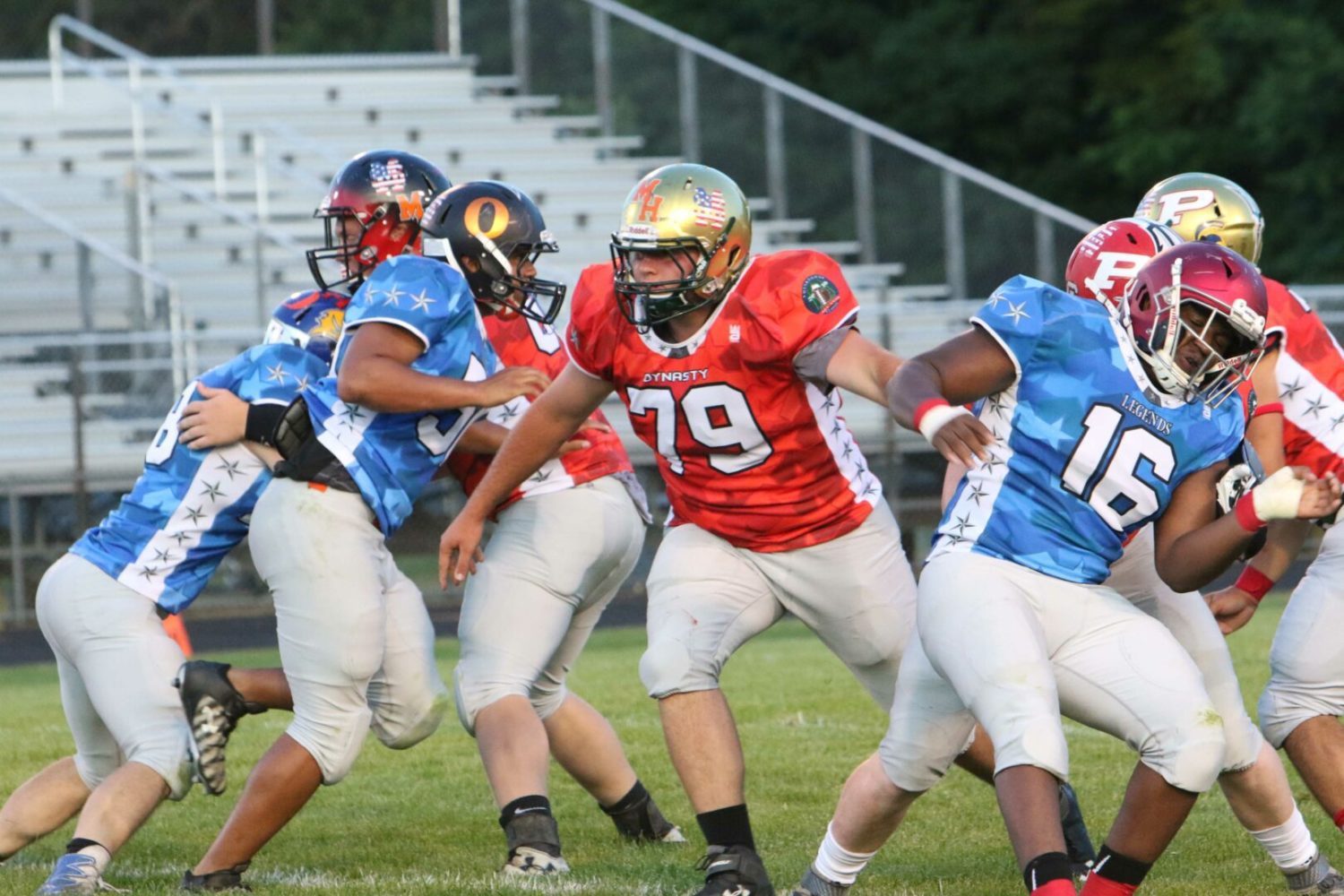 Muskegon Catholic’s Brock Johnson breaks through the line for the Dynasty. Photo/Joe Lane