Clippers cough up a late lead, lose to Lake Erie 10-8 in opener of home series

MUSKEGON- The Muskegon Clippers have had trouble maintaining late leads in the first week of the season.

On Friday the Clippers relinquished a one-run advantage, allowing two runs in the eighth

inning in a loss to St. Clair.

The trend continued on Saturday night when Muskegon saw its three-run lead evaporate in the eighth inning. The Clippers allowed five runs in that frame and fell victim to the Lake Erie Monarchs 10-8 at Marsh Field.

“It’s a game of 27 outs,” said Clippers Manager Walt Gawkowski. “It’s really disappointing. We are scoring enough runs to win games, but you got to stop them and we didn’t. 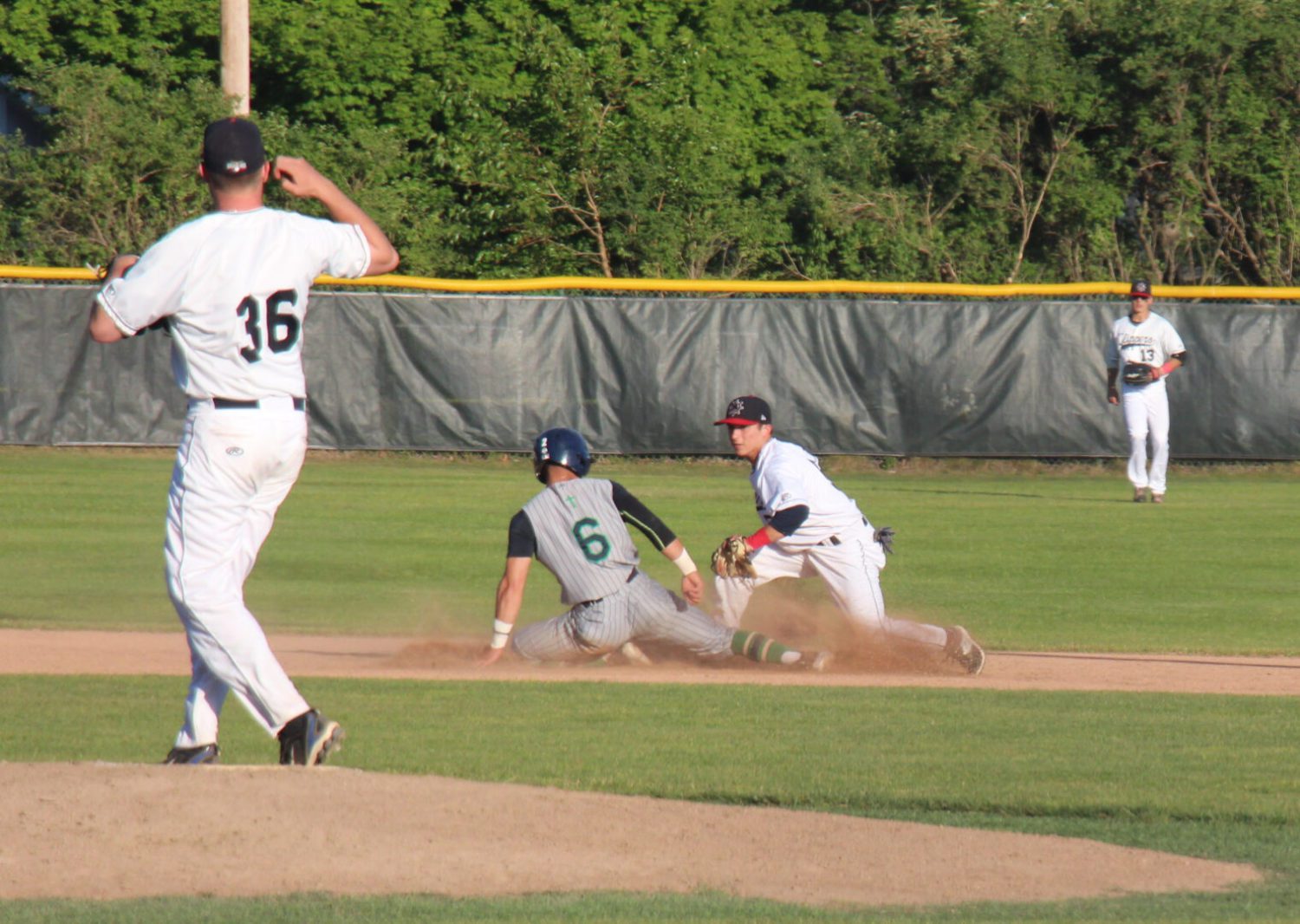 Nolan Bryant applies the tag at second base after pitcher No. 36 Scott Bean picks off the runner. Photo/Jason Goorman

“In this league everybody is going to beat everybody else. The teams are equally matched, so I know we are going to be there in the end.”

The Clippers are now 2-3 on the season, good for fourth place in the Great Lakes Summer Collegiate Baseball League’s Northern Division.

Muskegon will close out its two-game home stand with a rematch against the Monarchs on Sunday night. The first pitch set for 7:05 p.m.

The teams exchanged single runs in the first inning. The Monarchs opened the scoring on back-to-back doubles by Chris Bullock and Ryan Fournier. The Clippers responded on an RBI groundout from Ryan Blake-Jones.

The Clippers grabbed their first lead at 2-1 in the fourth inning. Tyler Trovinger avoided an inning-ending double play by beating out a throw to first base and allowing Peter Zimmermann to score a run.

Lake Erie took a 3-2 lead with two runs in the top half of the fifth. 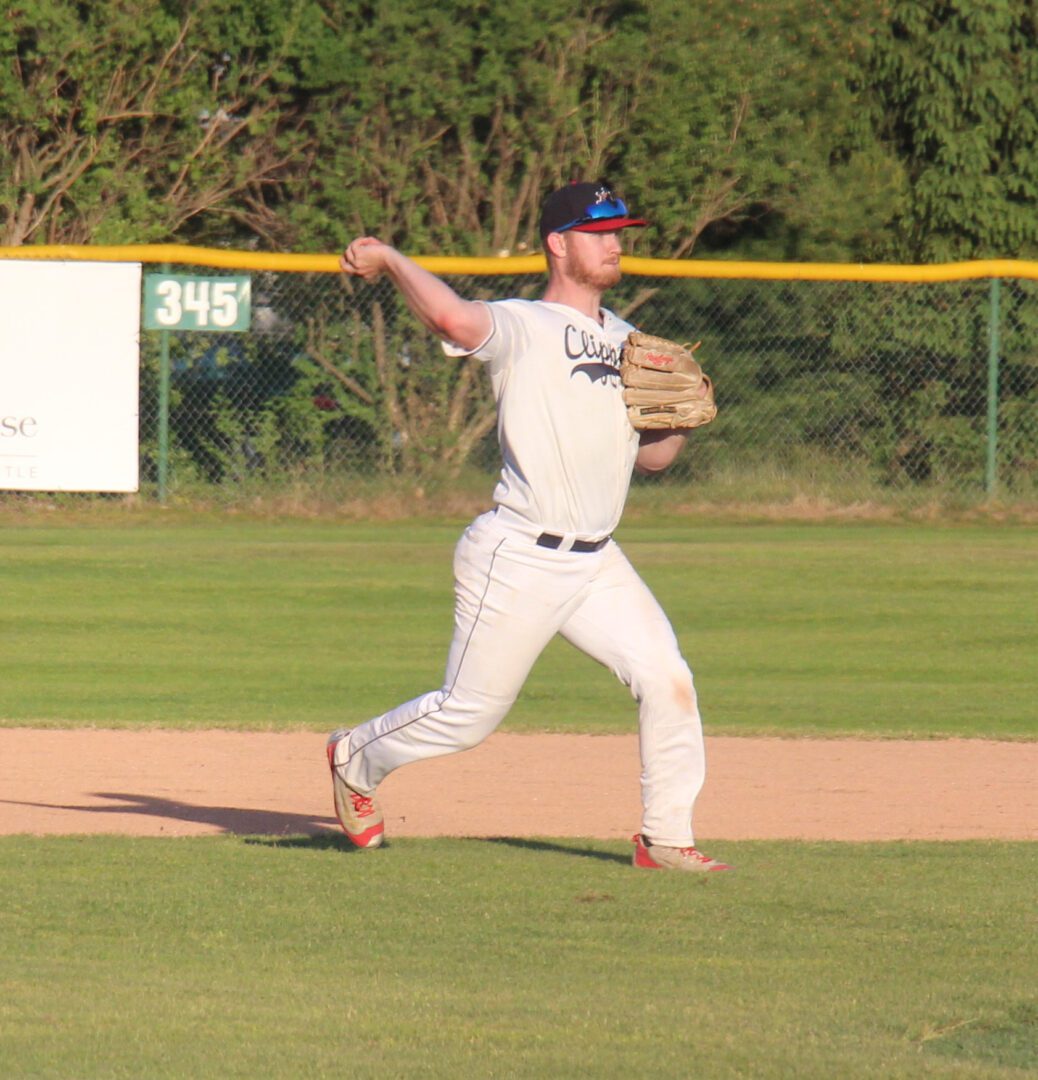 Muskegon pulled ahead 4-2 on a two-run homer by Zimmerman in the bottom of the fifth.

The Monarchs tied the game 4-4 in the sixth, but allowed two runs in the bottom of the frame on a two-run single by Nolan Bryant that gave Muskegon a 6-4 lead.

The Clippers struggled in the seventh, committing three straight errors to load the bases with nobody out. Lake Erie only managed to cut its deficit to one, scoring on a double play.

Muskegon increased its lead to 8-5 in the bottom of the seventh on Zimmermann’s second two-run homer of the game.

But the Clippers quickly lost their lead in the eighth, giving up five runs. The Monarchs scored on a wild pitch after loading the bases, to cut their deficit to 8-6. They scored again on a groundout and an RBI single by Ben Dickey to tie the game 8-8 with one out.

The Monarchs took the lead for good when they scored on another wild pitch, then added a run with an RBI single from Riley Minorik.

Muskegon was led by Zimmermann with three hits and four RBIs while Bryant added two hits and two RBIs.

Andrew Null suffered the loss on the mound for the Clippers, allowing two runs on three hits in two innings of relief. 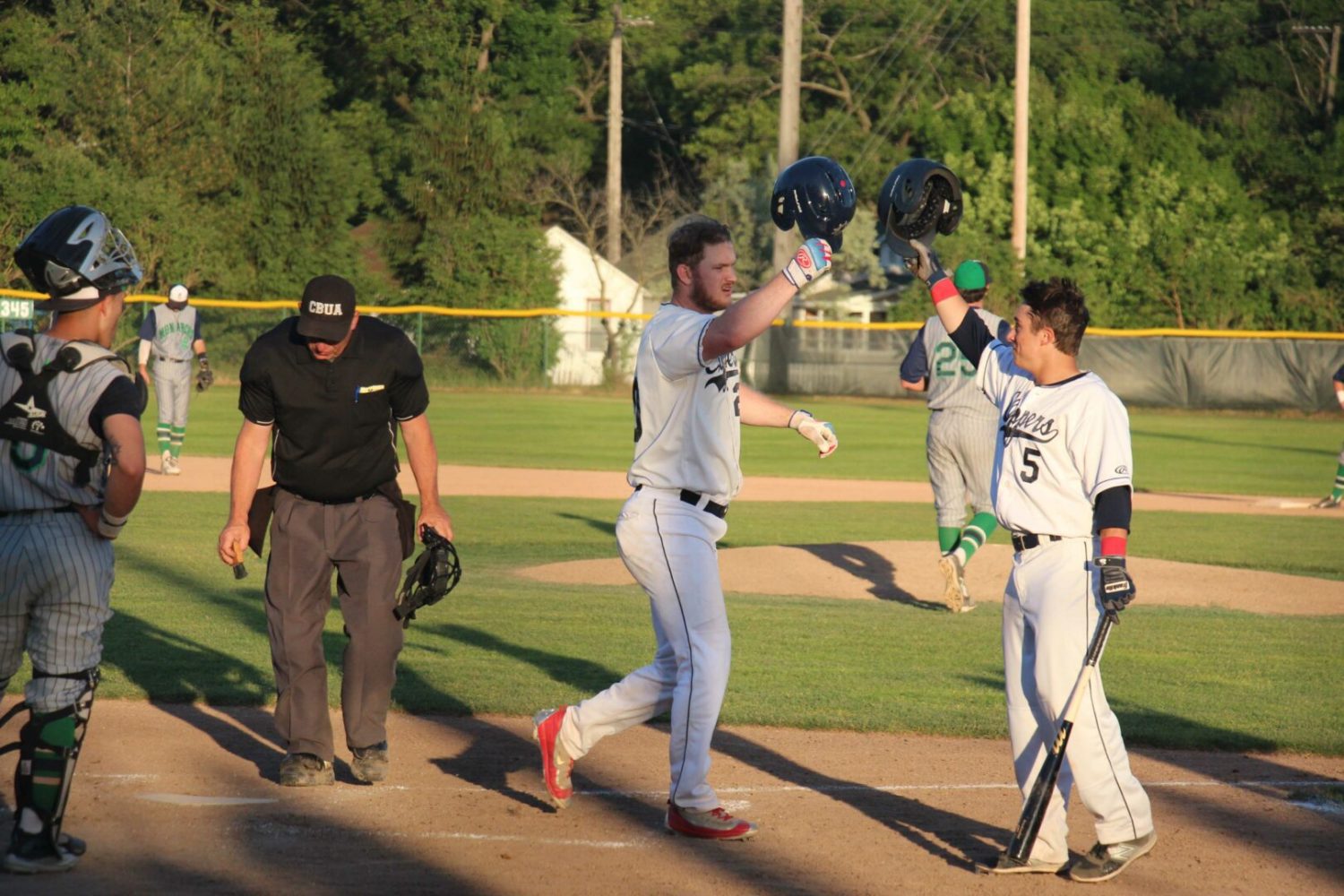 Peter Zimmermann lifts his helmet to No. 5 Nolan Bryant after belting a 2-run homer. Photo/Jason Goorman 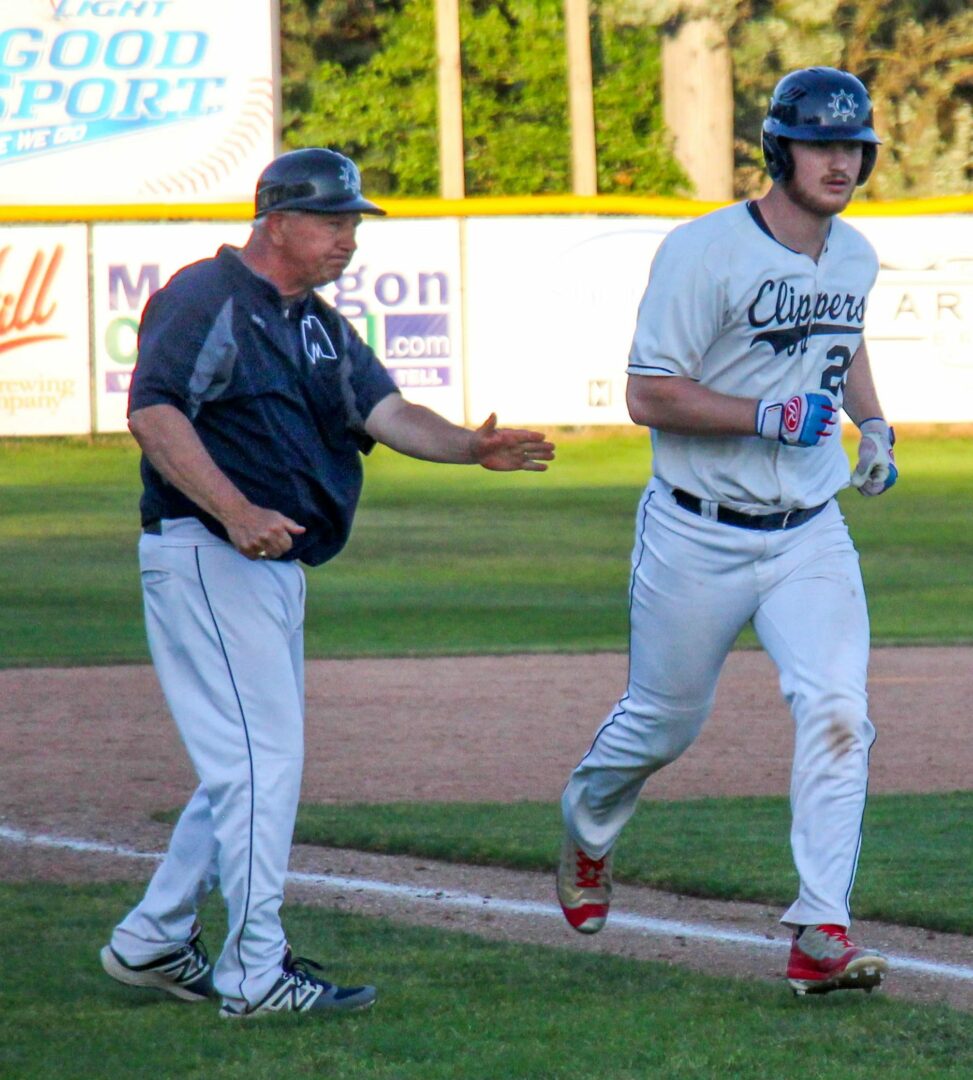 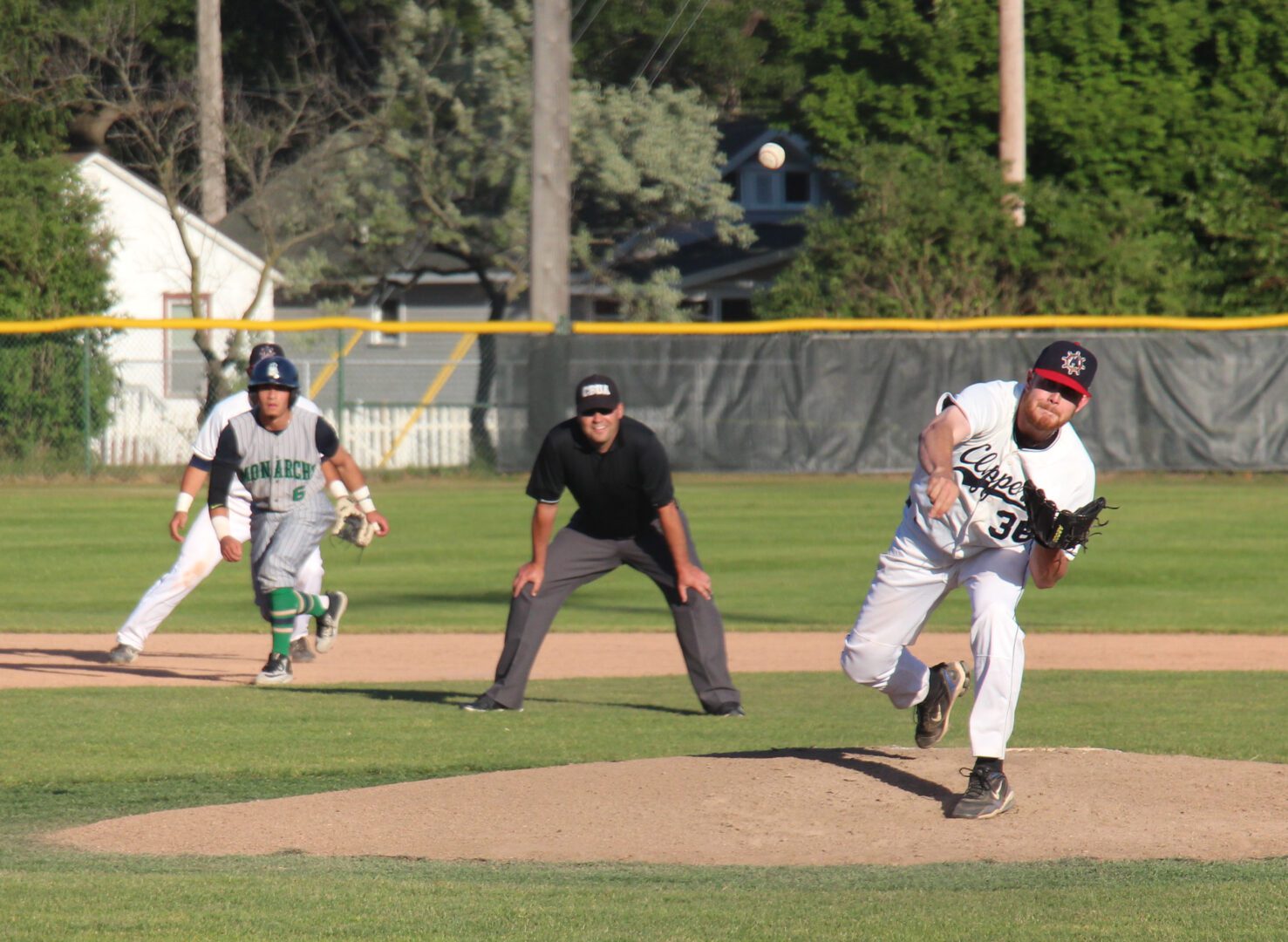 Scott Bean delivers the pitch for the Clippers. Photo/Jason Goorman 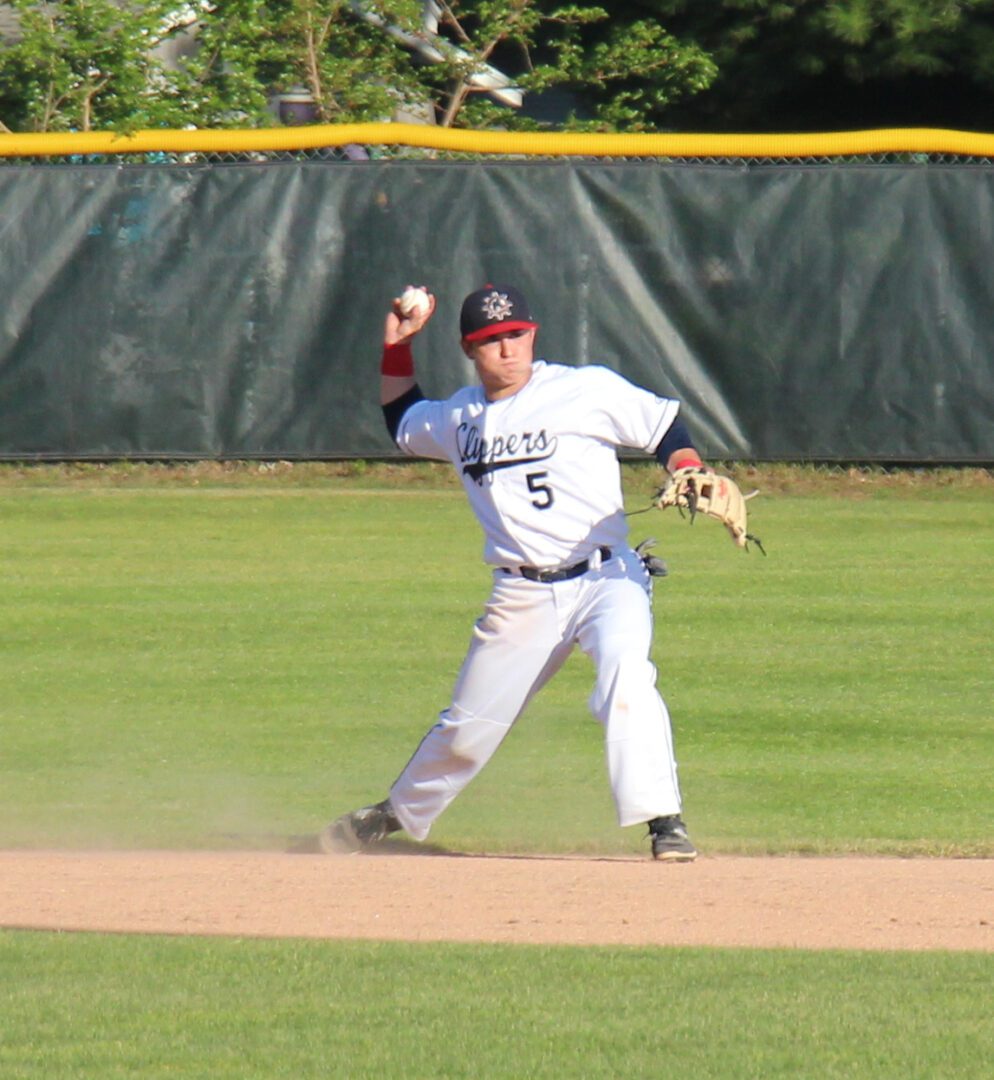 Nolan Bryant makes the play at second base for Muskegon. Photo/Jason Goorman 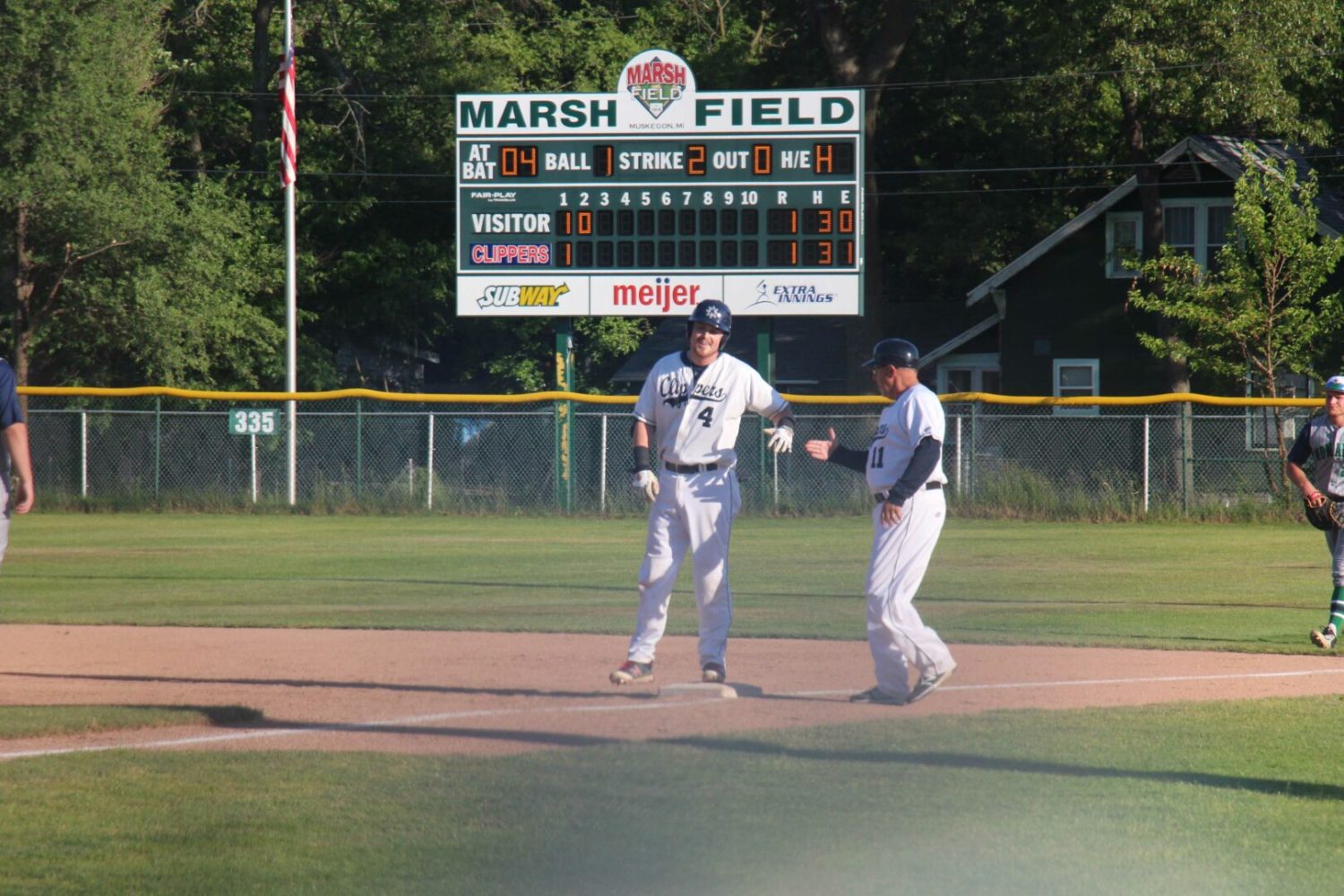 Cameron Bair is congratulated by first base coach Brian Wright after reaching base safely. Photo/Jason Goorman 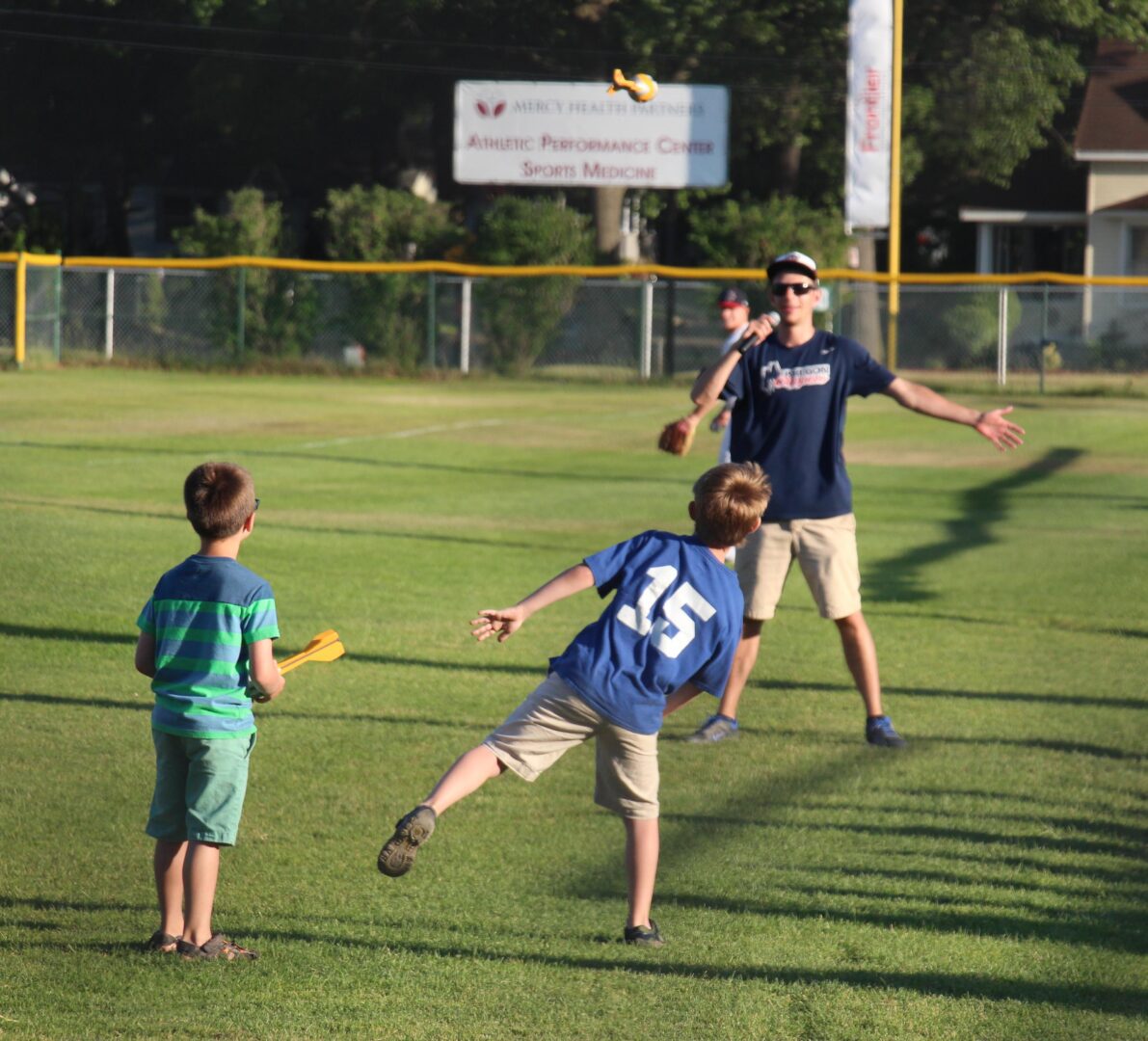