Risers wake up in the second half, beat Fort Wayne 3-2 in their second home game

MUSKEGON – The Muskegon Risers took a break from their league schedule on Saturday to host a 90- year-old soccer franchise, Fort Wayne Sport

Club. at Kehren Stadium on the campus of Muskegon Catholic Central.

The Risers came out flat and trailed at halftime, before acting head coach Matt Schmitt and the team’s veterans injected a sense of urgency and pride at halftime.

The halftime talk worked. The Risers rose up and rallied for a 3-2 victory in front of another big crowd in their second home game of the season.

The Risers are now 5-2-1 overall on the season. They are 4-1-1 in the Premier League of America’s East Division, good for first place.

“I just told them at halftime that the people who are here to watch them play work hard all week and plan their evenings around seeing them play,” said Schmitt, the team’s owner, who was filling in for Coach Ben Ritsema, who had a family commitment. “Although we’re playing really well in our league, we haven’t won anything yet. 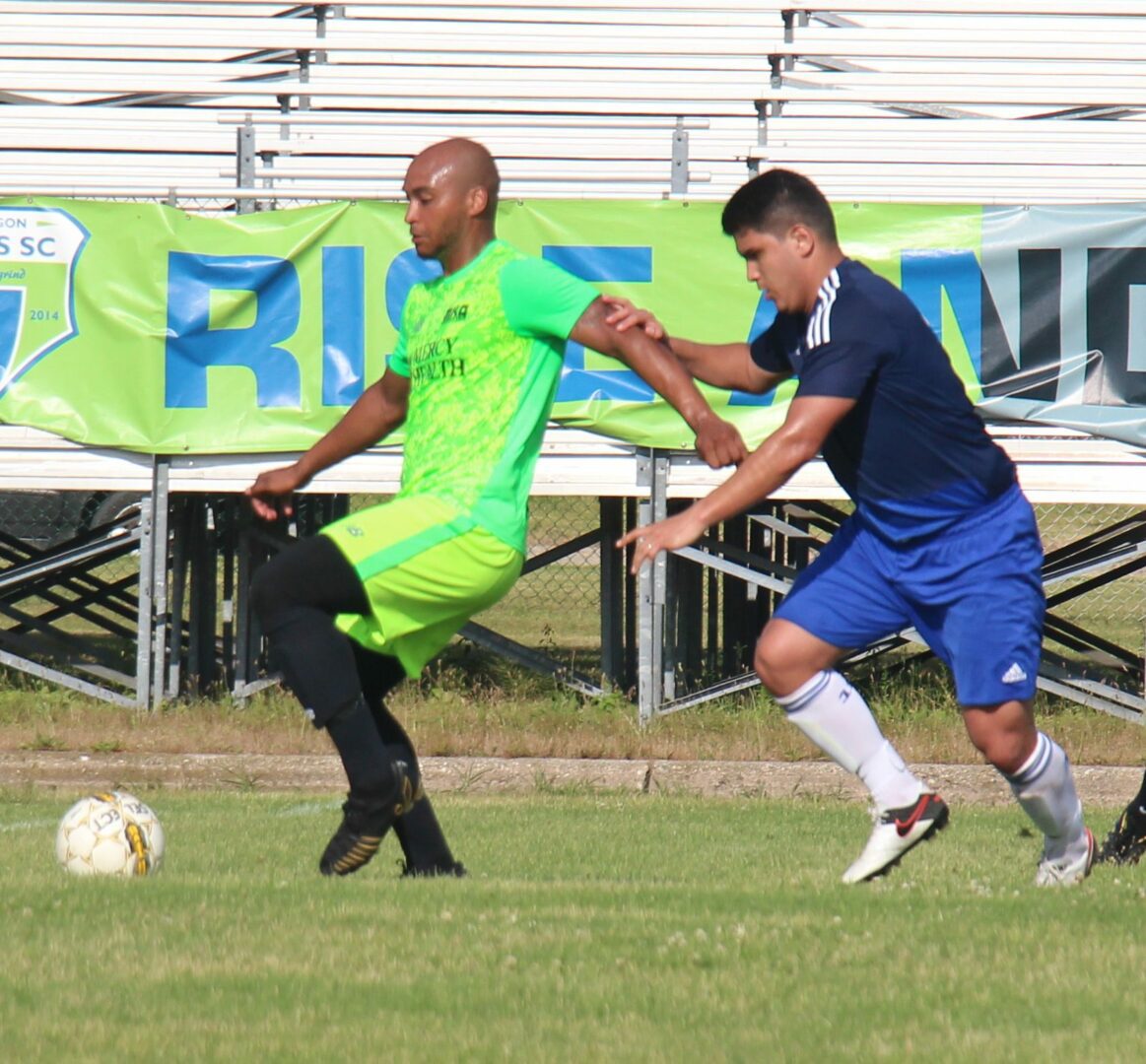 “I think that was a reminder that needed to be planted in them, and you saw the difference with maximum energy and it showed.”

Fort Wayne took an early lead in the 15th minute when a Paul Degaldillo shot was deflected to Jackson Didion, who scored the first of his two goals in the game.

The Risers answered back in the 19th minute. Kody Harrell made a cross pass to Paris Martins at the goal box on left wing, and Martins converted his first of two goals on the night.

Didion capped the first-half scoring at the 40th minute, putting Fort Wayne up 2-1 at the break.

Martins tied the game in the 72nd minute with a hard shot from the top of the box. 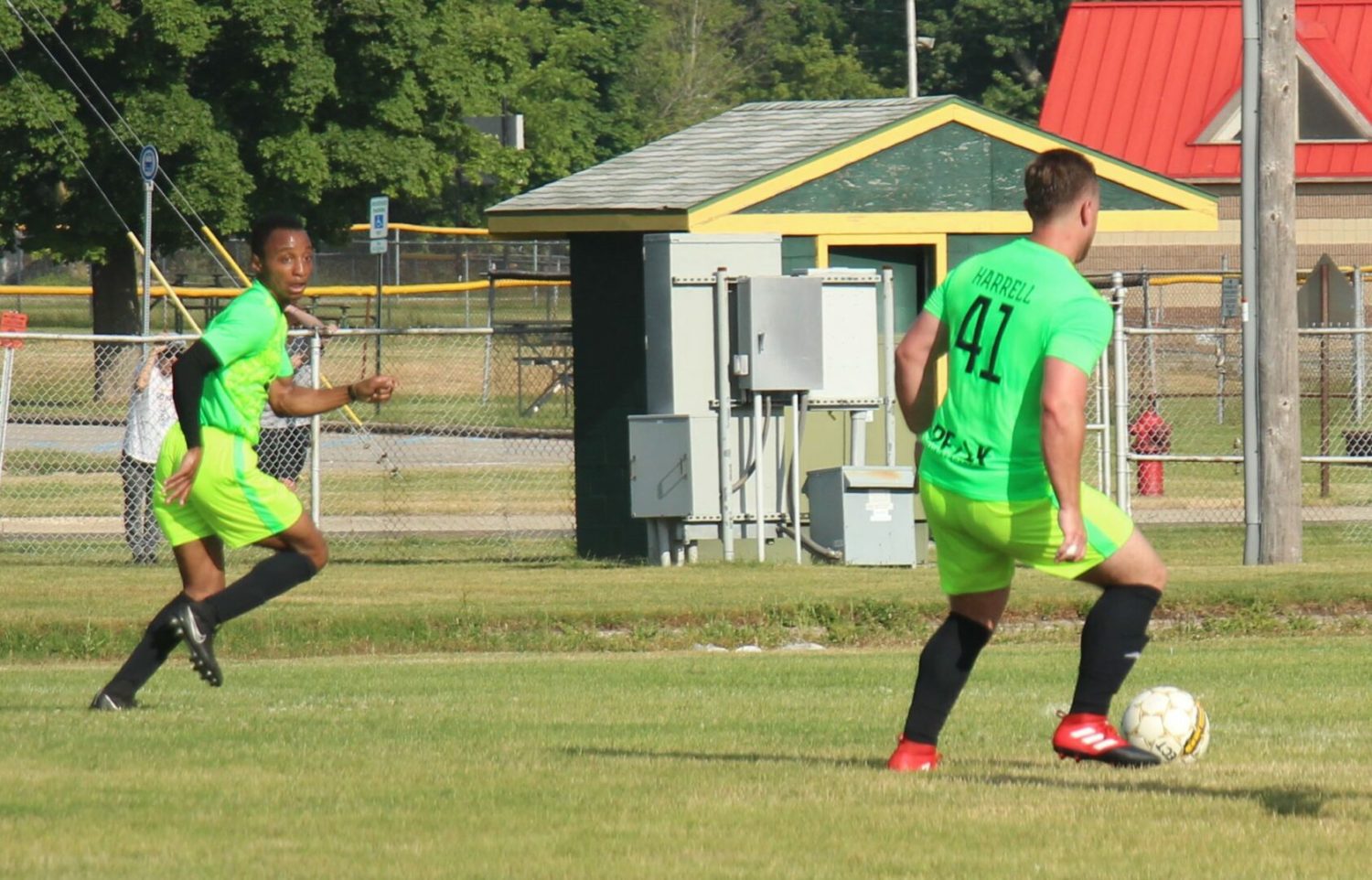 A sprinting Paris Martins is set up with the pass from No. 41 Kody Harrel for Muskegon’s first goal. Photo/Jason Goorman

Servera found himself right on the goal line approaching the goalkeeper, and somehow chipping the ball over the keeper and into the far side of the net.

The Risers have another home game next Saturday, but with a twist.

Muskegon will return to league action against Carpathia FC out of Sterling Heights. The game will be played at Grand Haven’s Lakeshore Middle School as a part of the Soccer in the Sand event.

“We’re going to make it a lakeshore experience,” Schmitt said. “It will be fun to get out there and have fun in that community, too.” 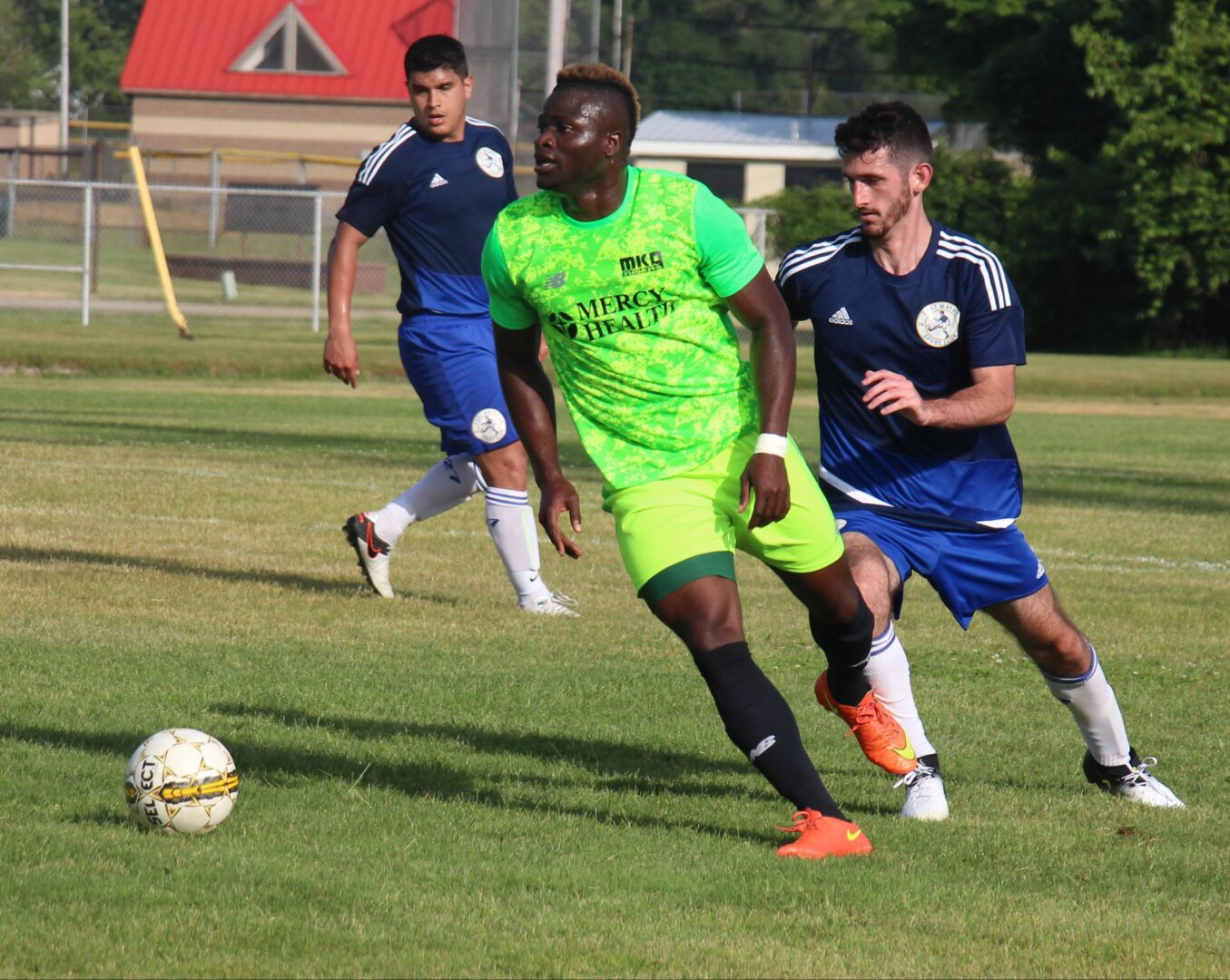 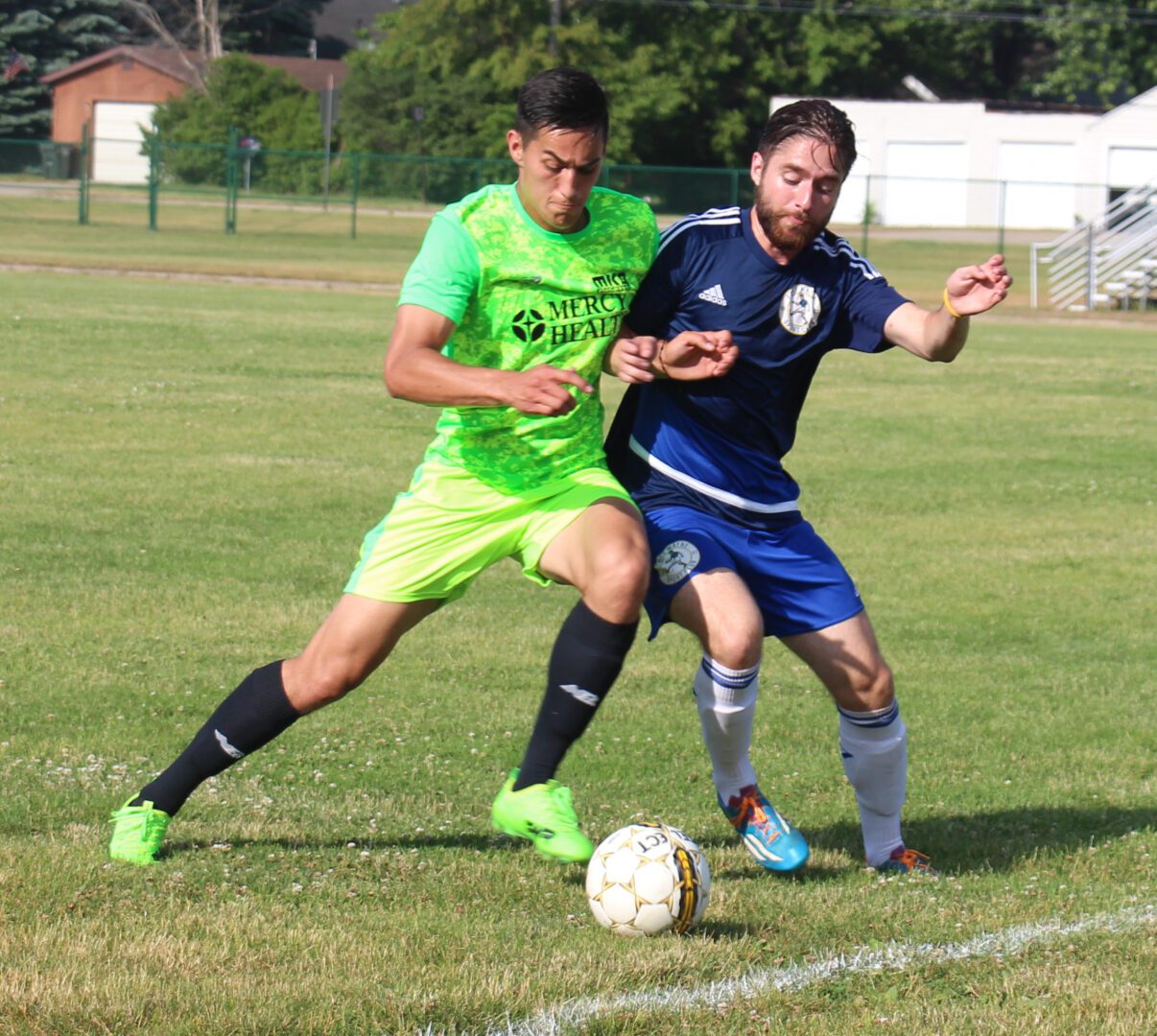 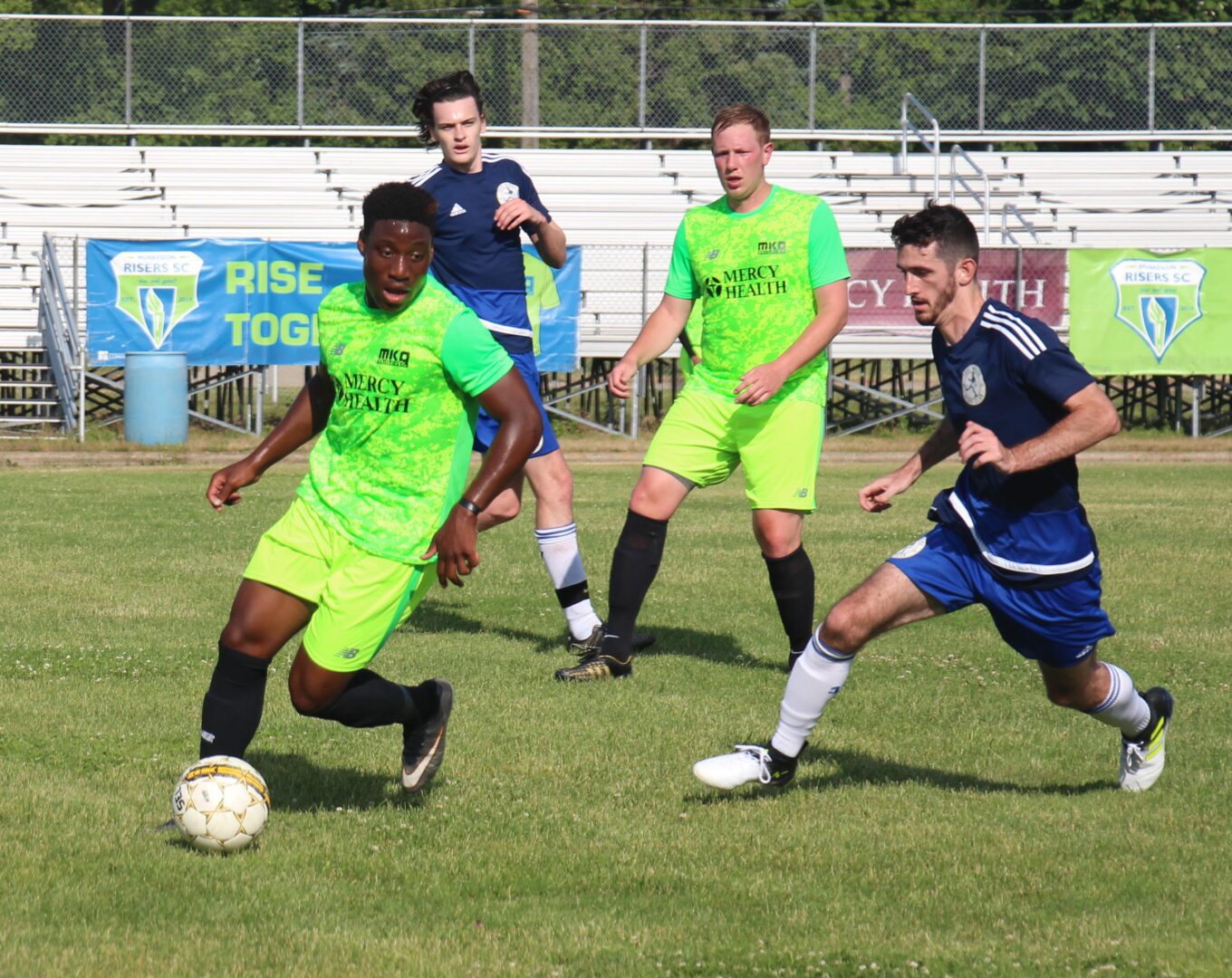