HOLLAND – The Reeths-Puffer softball team was two outs away from a district championship.

The Rockets carried a narrow 2-1 lead into the bottom of the seventh inning against host West Ottawa in the Division 1 district championship game on Saturday, but couldn’t finish the deal as the Panthers rallied to take the title with a 3-2 victory. 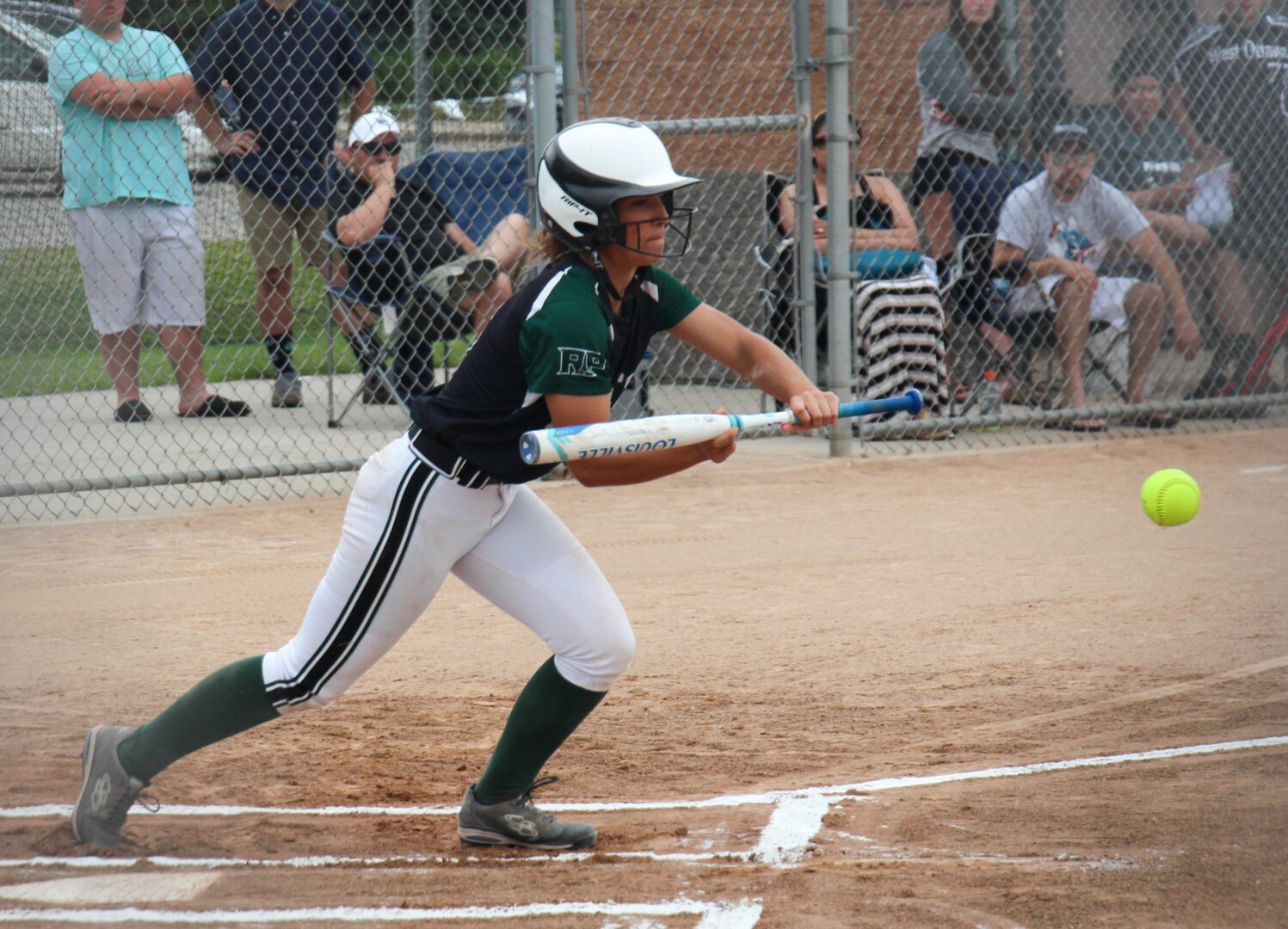 Jayla Olson lays down the bunt for Reeths-Puffer. Photo/Jason Goorman

R-P advanced to the finals after defeating Mona Shores 6-1 in the semifinals. West Ottawa knocked off Holland 2-0 to reach the championship game.

“They stunned us,” said R-P head coach Trista Stingle, whose team finished the season with a 29-9 record. “West Ottawa did a nice job. Nothing but respect for their coaches and their players.”

West Ottawa tied the game at 2-2 with one out in the seventh after an errant throw, then Reeths-Puffer’s MaKayla Thompson bounced back and struck out the next batter.

But the Panthers weren’t done.

Bridget Brault’s single to right knocked in the winning run and the favored Rockets saw the district championship slip through their fingers. 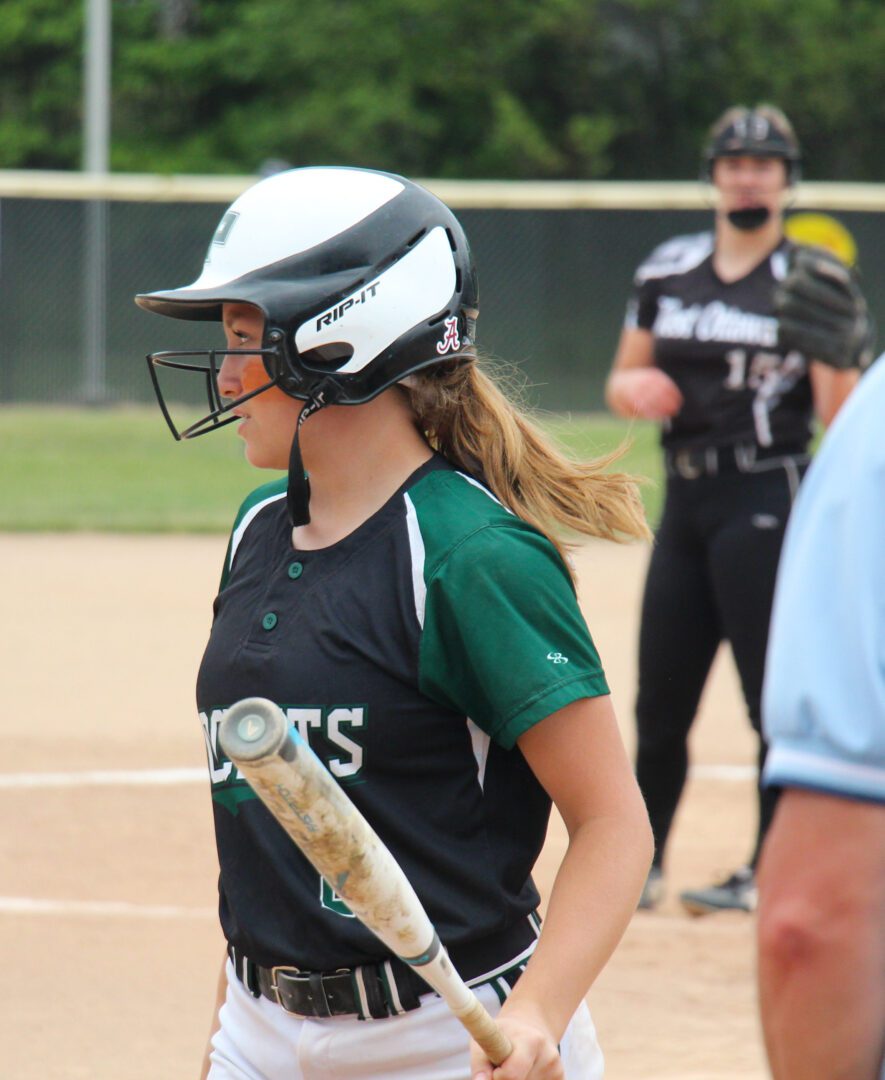 “We came here thinking we were winning,” Stingle said. “I think we had enough to do that, but unfortunately it didn’t work out in our favor today.

“I felt like we had enough in the arsenal. Just the balls that we needed to go through, didn’t go through, and theirs did. I told the girls this game is about two things – luck and skill. Unfortunately, they were a little bit luckier than we were.“

Thompson had a great game on the mound for Reeths-Puffer. She pitched all seven innings in the finals, scattering five hits and striking out eight.

Thompson’s pitching kept the score 0-0 until the R-P offense could get rolling in the fourth inning.

West Ottawa tied the game 1-1 in the bottom of the fourth, the Rockets reestablished their lead in the fifth, stringing together two hits to go along with a walk and a wild pitch. Thompson’s single to left brought home Jayla Olson to make the score 2-1.

But West Ottawa rallied in the seventh to steal the game and the district championship.

Stingle is proud of her girls and everything they accomplished this year.

“This group of kids, more than any group I’ve had before, collectively, in 10 years of coaching, plays with passion and drive every day,” she said. 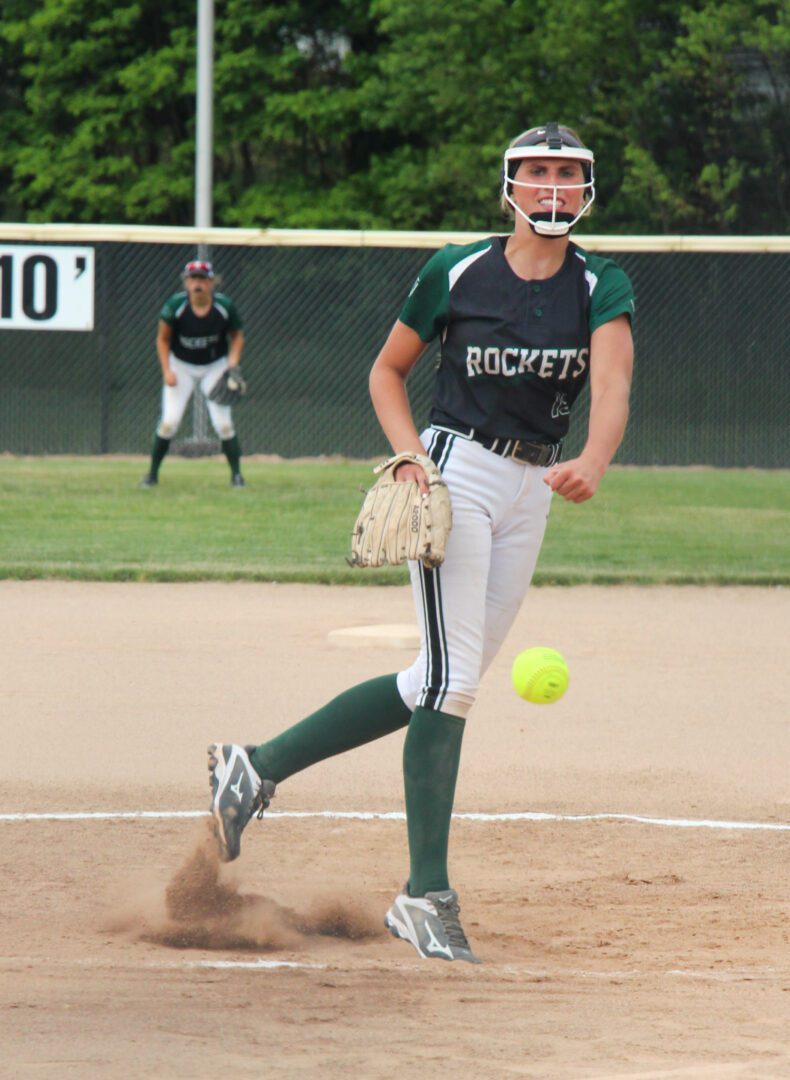 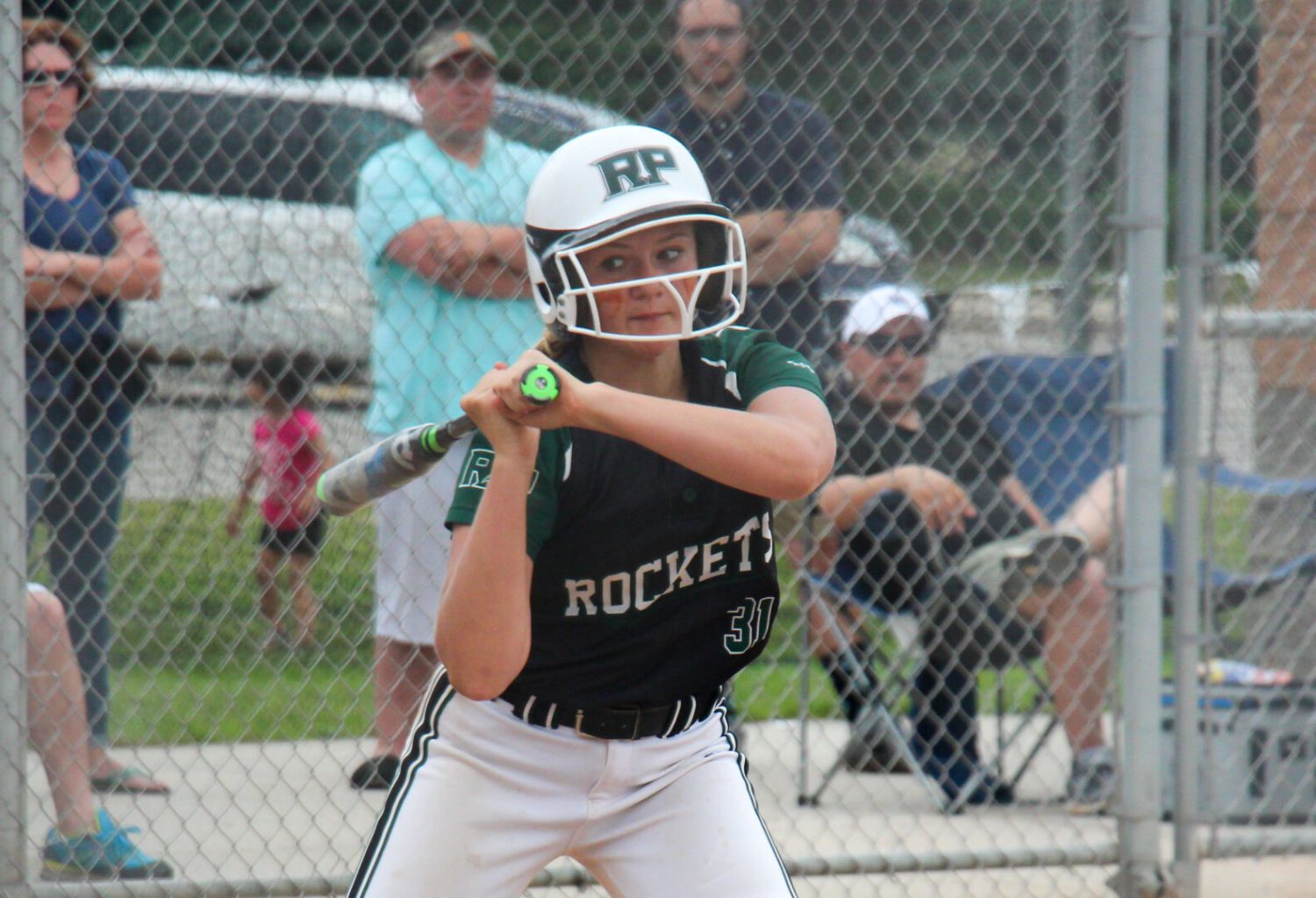 The Rocket’s Abigayle Mitchelson looks back at the catcher after the pitch. Photo/Jason Goorman 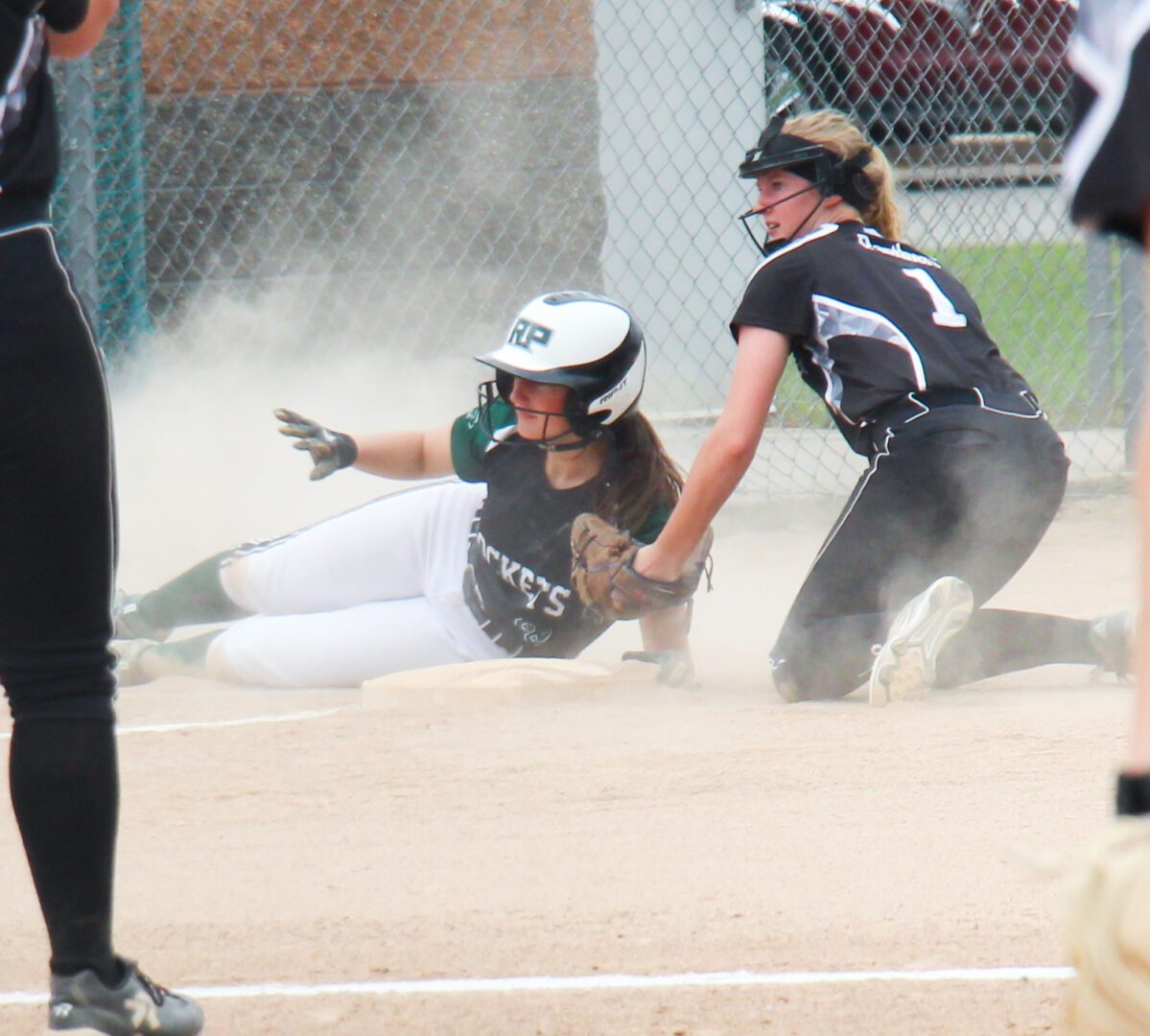 Reeths-Puffer first baseman Jayla Olson throws the ball back into the pitch with catcher Brooklynn Duffey walking back to get behind the plate. Photo/Jason Goorman 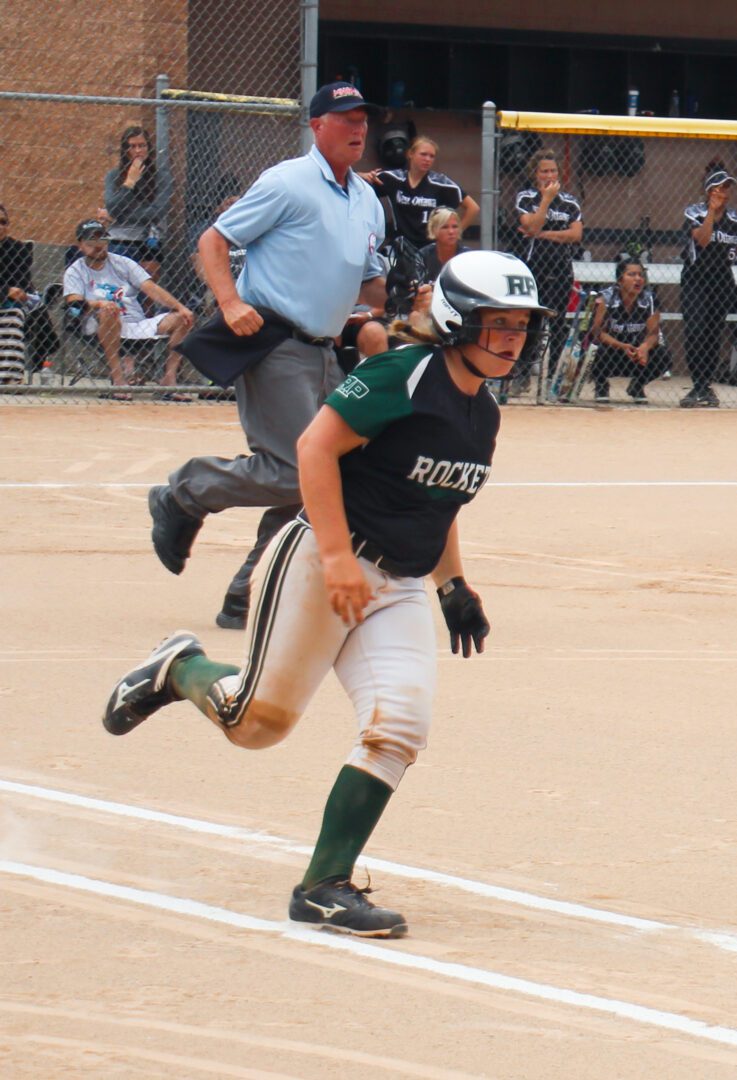