MUSKEGON- The Muskegon Clippers are continuing to fight, despite their struggles of late.

The Clippers, who entered Thursday’s doubleheader losing six of their last eight, are still in a close race for a playoff spot.

Muskegon took a step in the right direction by completing a doubleheader sweep over the Irish Hills Leprechauns at Marsh Field after cruising to an 11-3 win in the nightcap.

The Clippers won the opener in walk-off fashion by a 7-6 margin.

Muskegon is now 14-17 on the season, which is good for third place in the Great Lakes Collegiate Summer Baseball League’s Northern Division. 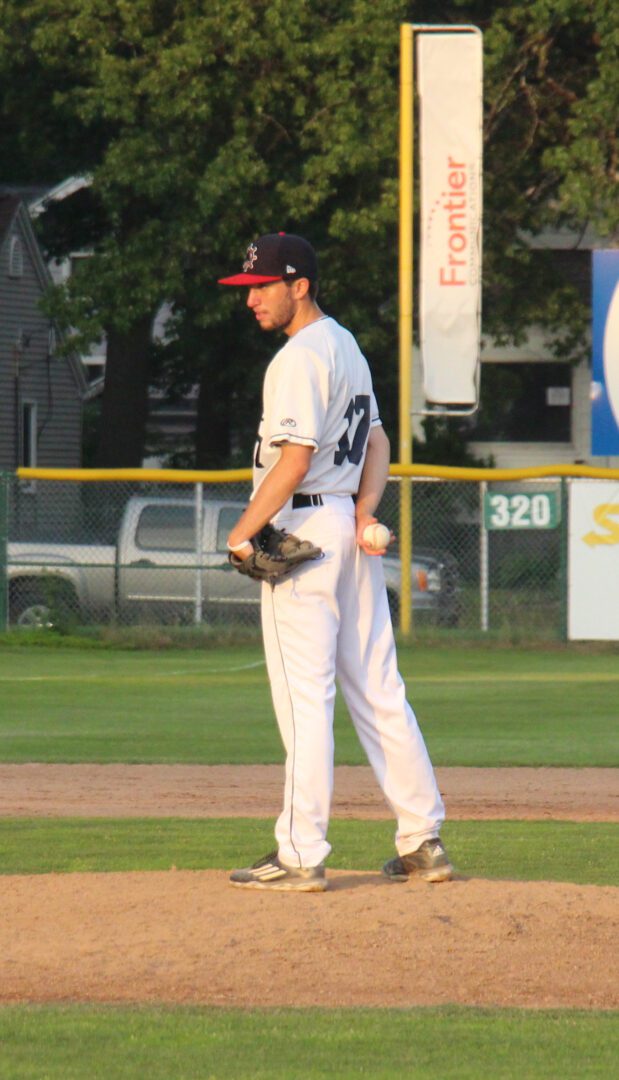 Muskegon pitcher Mitch Ashcraft waits on the mound for the signal. Photo/Jason Goorman

The Clippers, who are just a couple games out of a playoff spot with 12 games left, completed their first two-game sweep of the season.

“I thought we played pretty well,” said Clippers Manager Walt Gawkowski. “We had really good energy today, so it was a nice pair of wins.

“We have a chance, but we have to get a streak together. We are not giving up, I am not going to let it happen.”

The Clippers opened the scoring in the second game in the first inning on an RBI single by Ryan Blake-Jones to take a 1-0 lead.

Muskegon added two more runs in the second to take a 3-0 advantage. Brian Sobieski scored on an error and Jacob Buchberger scored on a double steal with runners at the corners.

The Leprechauns cut their deficit to 3-1 in the fourth frame on a solo home run by Freddy Jehle.

The Clippers continued to pour it on offensively in the bottom of the fourth, scoring five runs to increase their lead to 8-1.

Buchberger scored on a wild pitch, Blake-Jones knocked in two runs with a single, and Jimmy Roche had an RBI single.

Irish Hills scored a run in both the fifth and six innings to cut its deficit to 8-3 late in the contest. 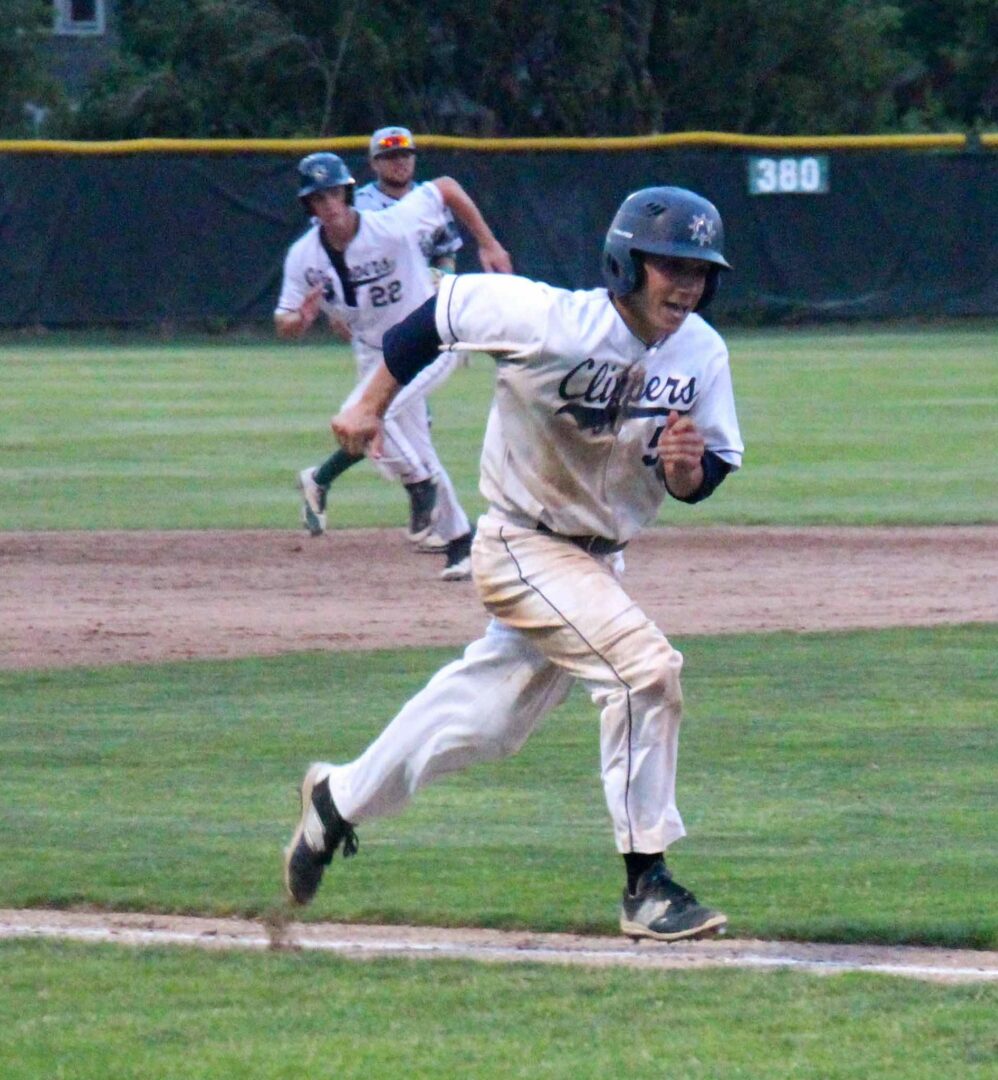 The Clippers were paced in the nightcap by Blake-Jones, who had three hits, four RBIs and scored two runs. Bryant added two hits and scored three times.

In Game 1 the Clippers were led by Bryant with three hits, two RBIs and two runs scored. Cameron Bair added a home run and two RBIs while Roche ended the game with an RBI sacrifice fly.

Brian Taggett picked up the win for the Clippers in the opener. 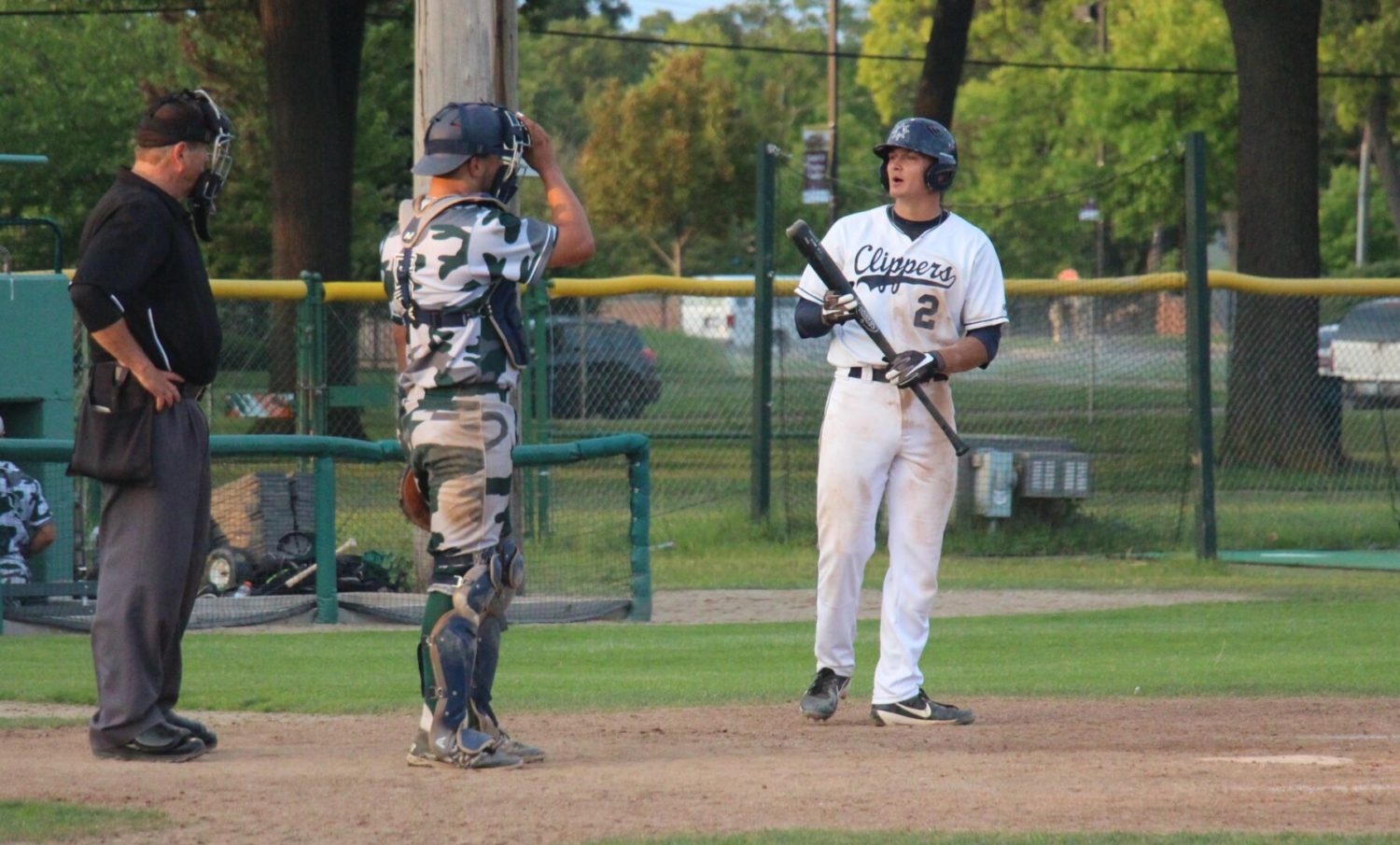 Tyler Trovinger talks with the ump before his at bat for Muskegon. Photo/Jason Goorman 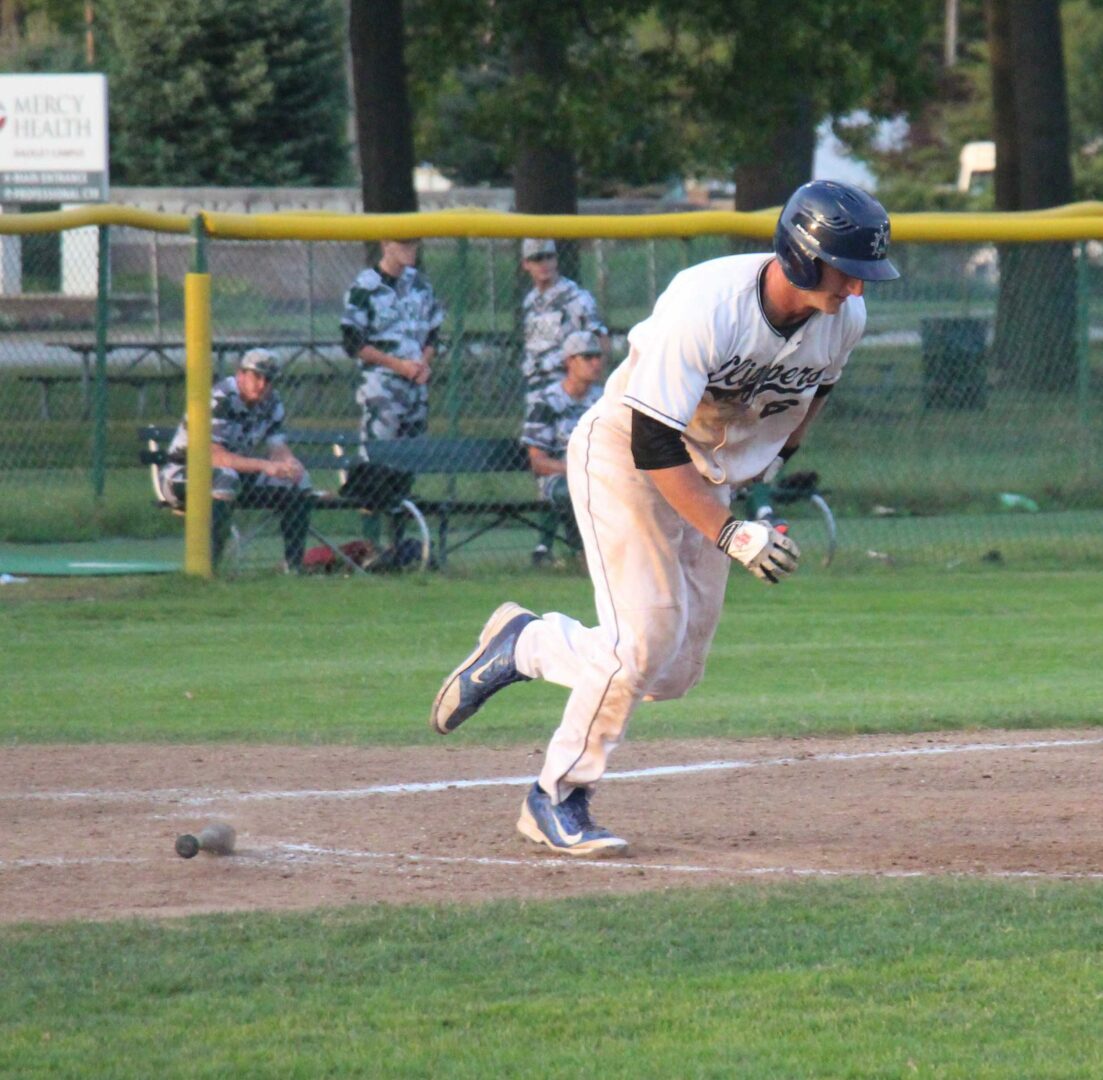 Jacob Buchberger heads for first base after connecting with the pitch. Photo/Jason Goorman 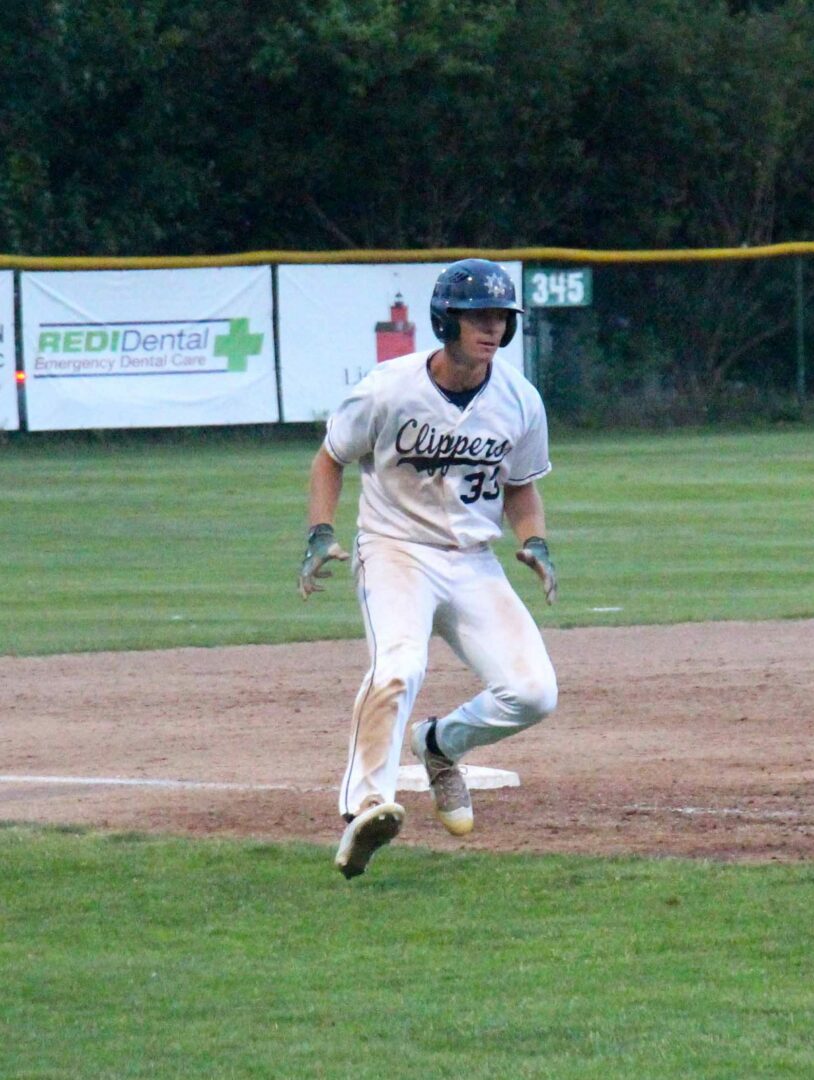 Bryce Kelley gets held up at third after making the steal from second. Photo/Jason Goorman 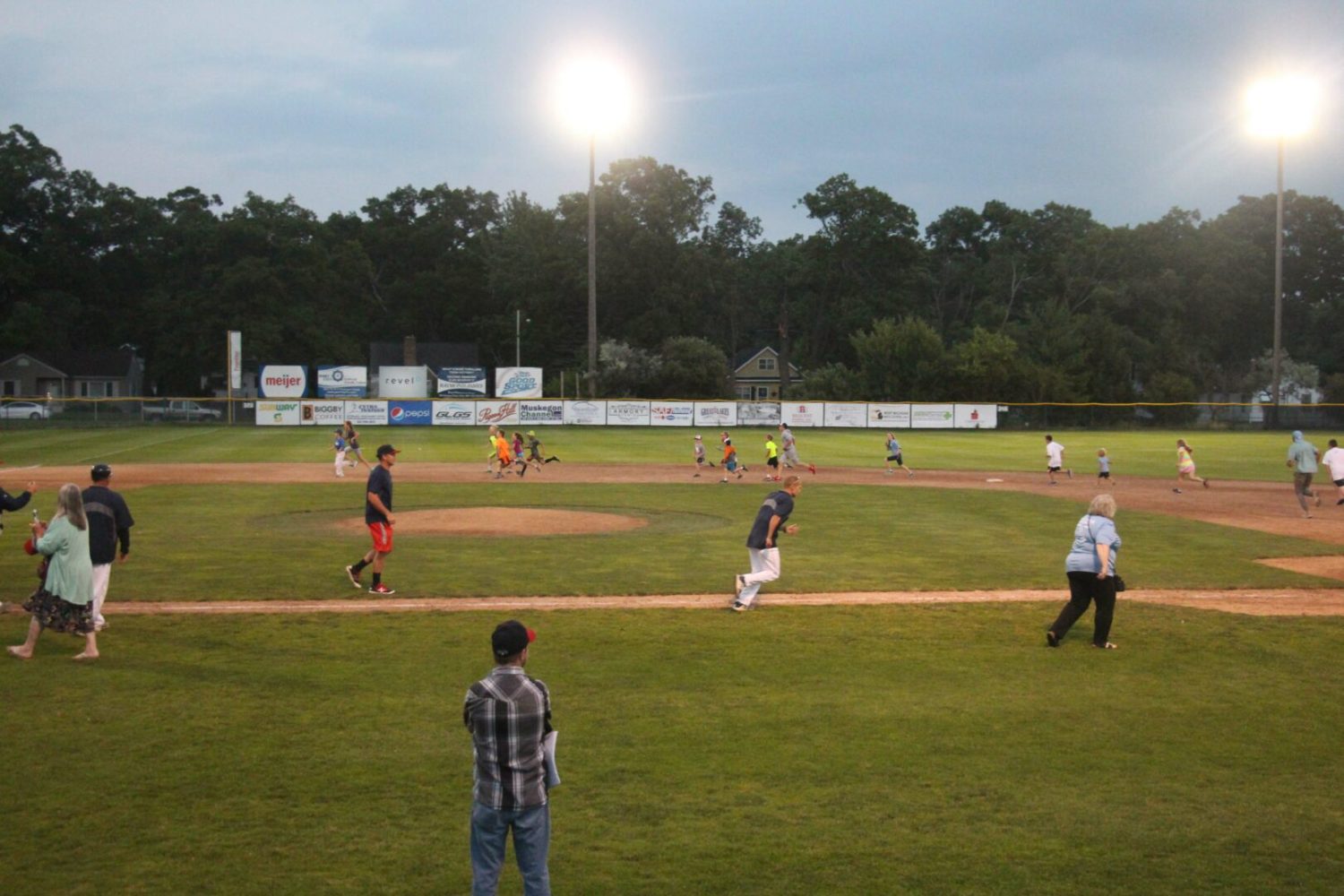 Young fans take off on the base paths after the Clipper win. Photo/Jason Goorman