*Note, the following article appeared in the LSJ’s football preview section, which is available at local stores and restaurants.

MUSKEGON – Four of five years ago, Muskegon Coach Shane Fairfield had reason to believe that his team would have increible depth at the quarterback position, well into the future.

Part of the reason was that La’darius Jefferson was moving up through the Big Red system, and obviously had tremendous potential. 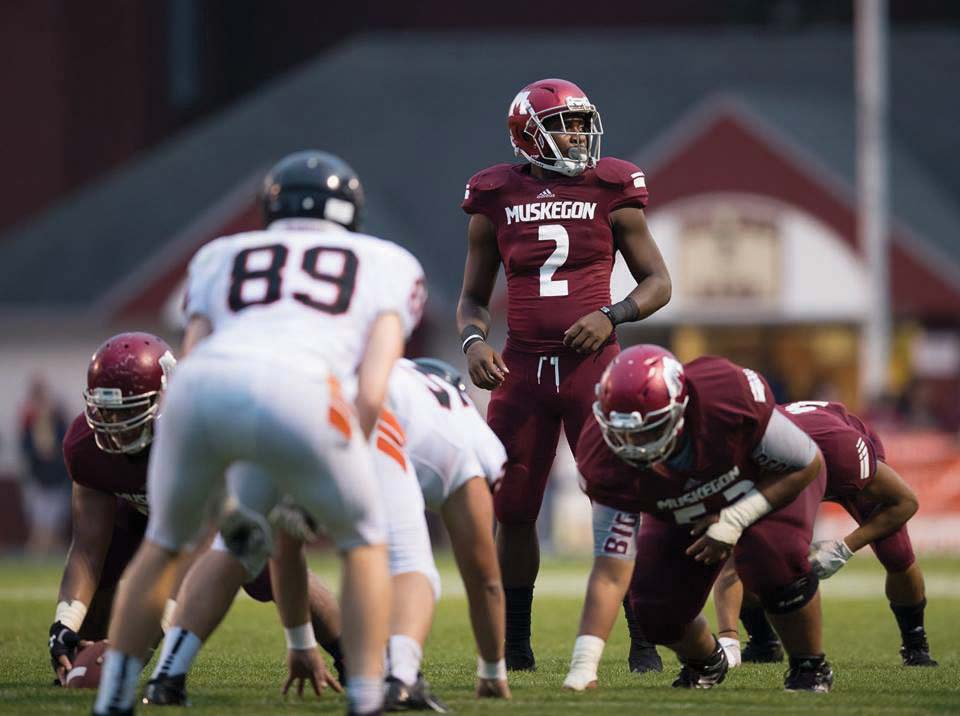 But that idea was set aside at the beginning of the 2015 school year, when Jefferson suddenly announced he was moving to Columbia, Mississippi to live with his mother.

Fairfield was obviously disappointed, because he knew Jefferson had the tools and mentality to be something special. But he also understood that family comes first, so he wished La’darius the best.

“He was with us all the way through the dead period that summer (of 2015), then he went down to see his mother in Mississippi for a week,” Fairfield said.

“Then he got down there, wanted to stay with his mom, and the coaches down there talked him into staying.

“I got the phone call in a hotel room when we were at veer camp that July. It hurt a little bit, after working with him all that time, but you can never argue when a kid wants to be with his mom.

“It was just one of those moments when we had to say, ‘We love you, best of luck.’”

Fairfield never expected to see Jefferson on a football field again, except maybe in highlight films.

So he was surprised and thrilled when the young quarterback returned to Muskegon High School after the first semester of his sophomore year, and became a Big Red again last season as a junior.

Muskegon already had a star quarterback, senior Kalil Pimpleton, but there was plenty of room for Jefferson.

The two quarterbacks worked well together and shared time on the field. Pimpleton started every game, but Jefferson started taking more snaps as the season progressed.

That allowed Fairfield to frequently move Pimpleton to slot receiver, where he did a lot of damage with his speed, elusiveness and pass-catching abilities.

Meanwhile, Jefferson was brilliant during his limited playing time. He threw for 957 yards and nine touchdowns last season, and ran for 929 yards and 19 scores. Those kind of stats would be great for any high school quarterback, and Jefferson wasn’t even the starter.

Pimpleton and Jefferson led the Big Reds to a 12-2 season, an O-K Black Conference champiionship, district and regional titles, and a berth in the Division 3 state championship game, where they lost a 29-28 heartbreaker in the final seconds to Orchard Lake St. Mary’s.

This season Pimpleton is at Virginia Tech University on a football scholarship, and Jefferson will be the full-time starting quarterback.

After watching what he could do in limited playing time, Muskegon fans are excited to see what he can accomplish as the full-time senior signal-caller.

“He’s got a big arm and a big field presence,” Fairfield said of the 6-2. 225-pound Jefferson. “He steps up and stands tall in the pocket. He’s able to step aside from pressure, and he loves to sling it around. He can run well, too. I thnk you will see more of that from him this season.

‘Everybody can see me play’

Jefferson’s move down south really wasn’t surprising, because Columbia, Mississippi was where he was born and spent the early years of his life. 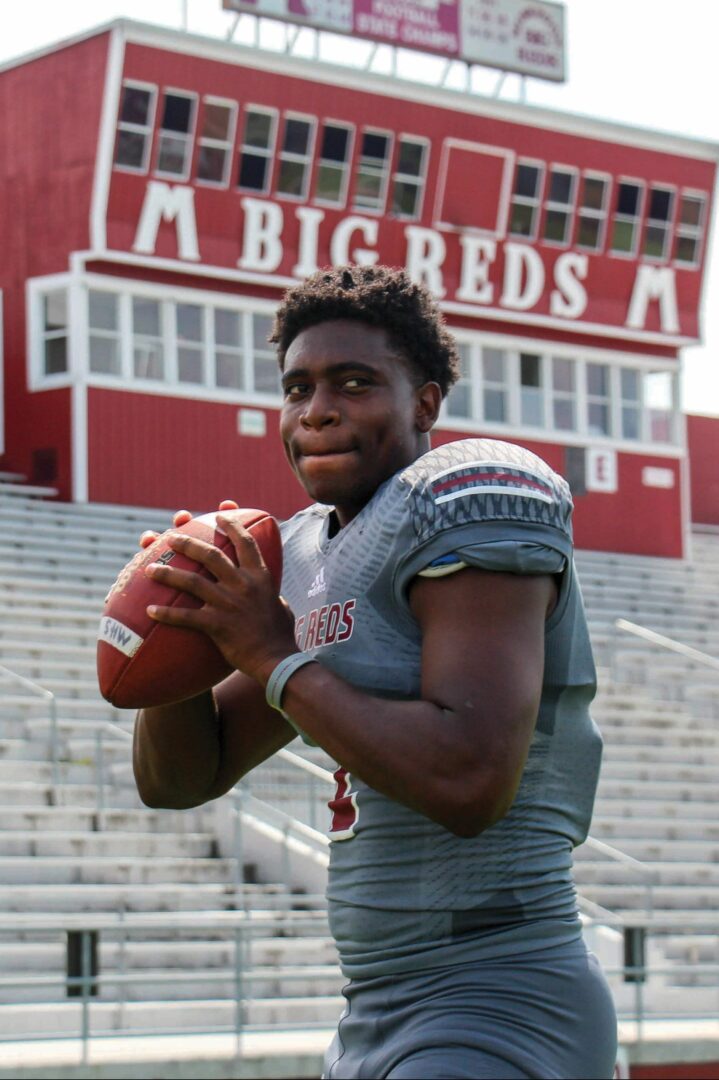 Jefferson drops back for a photo during an LSJ interview. Photo/Jason Goorman

He came to Muskegon to live with his grandmother when he was in the seventh grade, but his hometown always remained close to his heart. As much as he enjoyed playing football in the Big Reds program through his freshman year, he was happy to go home and be with his mother and the old friends he had missed since his grade school days.

“I loved it down there,” Jefferson said. ‘I’m really a country person at heart. I love going fishing, riding four-wheelers, all that kind of stuff.”

Jefferson played for the East Marion High School varsity football team in the fall of 2015, and nobody was surprised when he became the starting quarterback as a sophomore and was an instant star.

He rolled up more than 1,000 yards rushing and 1,000 yards passing that season, and it was obvious that his best was yet to come.

But his high school team wasn’t very good. East Marion finished with a 1-9 record that season. Jefferson had never been on a losing team in the Muskegon program, and the defeats were hard to take. But he said he grew from the experience, as an athlete and a person.

“That taught me how to lose, and to be able to take it on the chin and say, ‘Hey, we have to bounce back next week,’” Jefferson said. “I had never really experienced losing before, but it taught me how to take constructive criticism and keep getting better.”

While Jefferson endured the losing in Mississippi, he missed the coaching he received in Muskegon, and started wondering if his development would be better served with the Big Reds.

“I missed the coaching, and I missed the winning, too,” Jefferson said. “You’ve got to have a good foundation to make yourself better and make those around you better.”

His mother, Lakethia Cowart, had the same idea, so by the time the holidays rolled around in 2015, he was headed back to Muskegon to live with his grandmother again.

“It was my idea at first, then my mom really pushed it,” Jefferson said. “She said I want you to get back up there. She said it would be the best thing for me as far as getting into college. I love her so much. She would do anything for me.”

A few weeks after he returned to Muskegon, Jefferson got some good news. His mother called and said she was also moving to Muskegon so the family could be together.

“We wanted to be back together – me, my grandmother and my mom,” he said. “Now we’re reunited as a family and everybody can see me play on Friday nights.”

‘Now we have to finish’

Jefferson obviously played a different role when he returned to the Big Reds last season. Instead of being the star quarterback, he had to take a back seat to an established star. 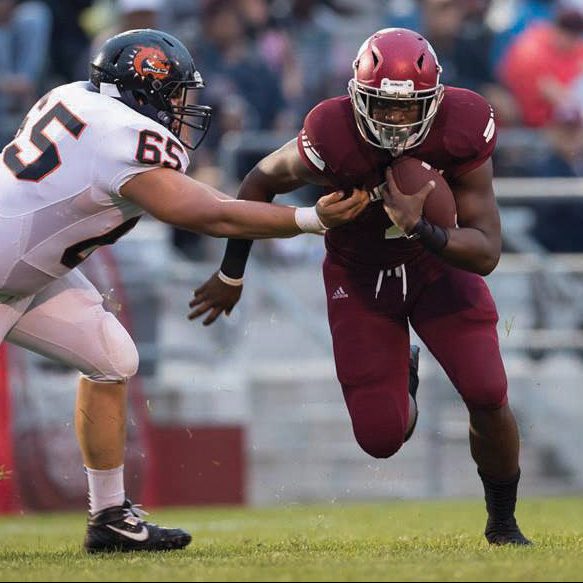 But he said his partnership with Pimpleton couldn’t have worked out better.

“It didn’t bother me,” Jefferson said. “Every time I stepped on the field with him I got better. I left before I got to know the offense, so when I came back I had to learn all the plays and the offense. He always sat me down and taught me all the plays.

“He’s a good person. He always kept me positive. We never looked at it like a battle between us. It was just two great quarterbacks trying to win.”

Fairfield said he would have loved to make Jefferson the starting quarterback last fall, so Pimpleton would have been free to use his skills elsewhere, but the Big Reds have a complicated offense, and Jefferson needed time to learn.

“Last year that’s what he was lacking,” Fairfield said about Jefferson. “If he had been here the whole time he would have been the starter. As he started to pick everything up, he started to get more playing time and Kalil was more in the slot.

“They were pretty much 50/50 at quarterback after a while, and it was hard for people to defend us. It was pretty much whoever had the hot hand.”

The system worked great all season, and the Big Reds piled up the points. They outscored opponents 481-112 in their nine-game regular season, and 263-68 in their five-game playoff run.

Unfortunately for the Big Reds, the run ended with the 29-28 loss to Orchard Lake St. Mary’s in the state finals at Detroit’s Ford Field. And it ended in particularly painful fashion for Muskegon.

The Big Reds overcame a late two-point deficit and scored a touchdown with 1:55 left to take a 28-23 lead. But St. Mary’s stole the championship by completing a touchdown pass with four seconds remaining on the clock.

“There was a bunch of tears and pain, especially for the seniors,” Jefferson said about the stunning loss.

To make matters worse, it was the Big Reds’ fourth trip to the state finals in five years, and their fourth straight loss. Jefferson said as much as that fact hurts, it’s serving as motivation as the new season approaches.

“We know what it takes to get there, but now we have to finish. We just have to take care of business, on and off the field, and do all the little things right.”

Jefferson said he’s not worried about being the main man this year, and running the offense without Pimpleton around.

“I feel like God blessed me and put me on this stage for a reason,” he said. “When I was young, I used to get nervous, but now my biggest thing is, every day I step on the field I need to get better.”

Jefferson has already committed to study and play football next year at Central Florida University. A lot of colleges have expressed interest, including some bigger schools, but he said he chose Central Florida for academic reasons.

“The most important thing is that they have the program I want – aerospace engineering,” he said. “I want to design planes.”

Jefferson has already demonstrated excellence in the classroom. Last year he carried a 3.7 grade point average in the first semester and a 3.8 in the second. Overall he has a 3.4 GPA.

He admits he’s not crazy about school, but pushes himself in the classroom as well as the football field because he’s determined to succeed in life.

“If you want to get your family a better life, you do whatever you have to do,” he said. “I’m not really a school person, but you have to put yourself in those situations. I feel like I have to do this to put my family in a better situation.”