MUSKEGON – Jason Andree lost track of his most important raffle ticket at the worst possible moment.

But thanks to the kind folks at Langlois Home Furnishings, he received a new La-Z-Boy recliner, just the same. 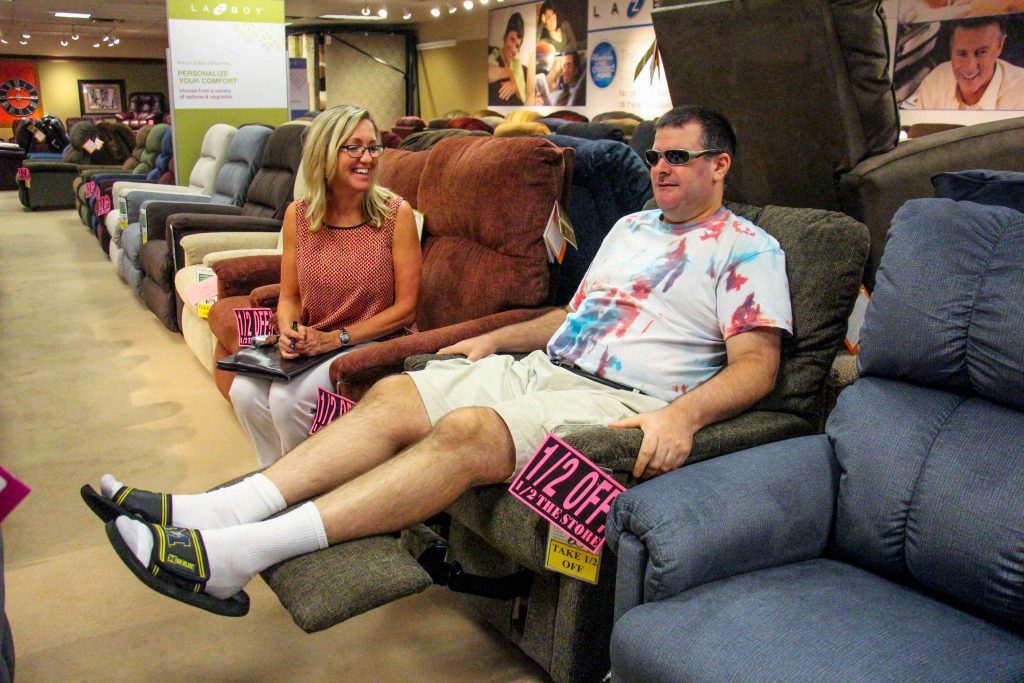 Andree, 38, a Muskegon resident, was hoping to win the chair when he got to the party, because he said he needed a new one at home.

He purchased $20 in raffle tickets and put most of them in the basket to win the recliner, or a pair of University of Michigan football tickets.

As it turned out, his ticket number was called for the recliner, but he didn’t realize it soon enough. So another number was drawn, a happy winner came up to claim the chair, and the party ended.

“I had all my tickets laid out in front of me,” said Andree, who graduated from Muskegon High School in 1998 and is a longtime member and volunteer at Sacred Heart Church. “I’m going through all of the numbers, saying ‘OK, where is it?’ I looked and looked but couldn’t find it.

“But as soon as they called the second number and the other guy got up there, I had found the number. And I’m like, ‘Oh no.’ I was a little upset. I had been looking for quite a while. And when I found the ticket, I set it aside and Jason (his friend Jason Housler) was letting me hear about it. He couldn’t help me because he was trying to read his own tickets. 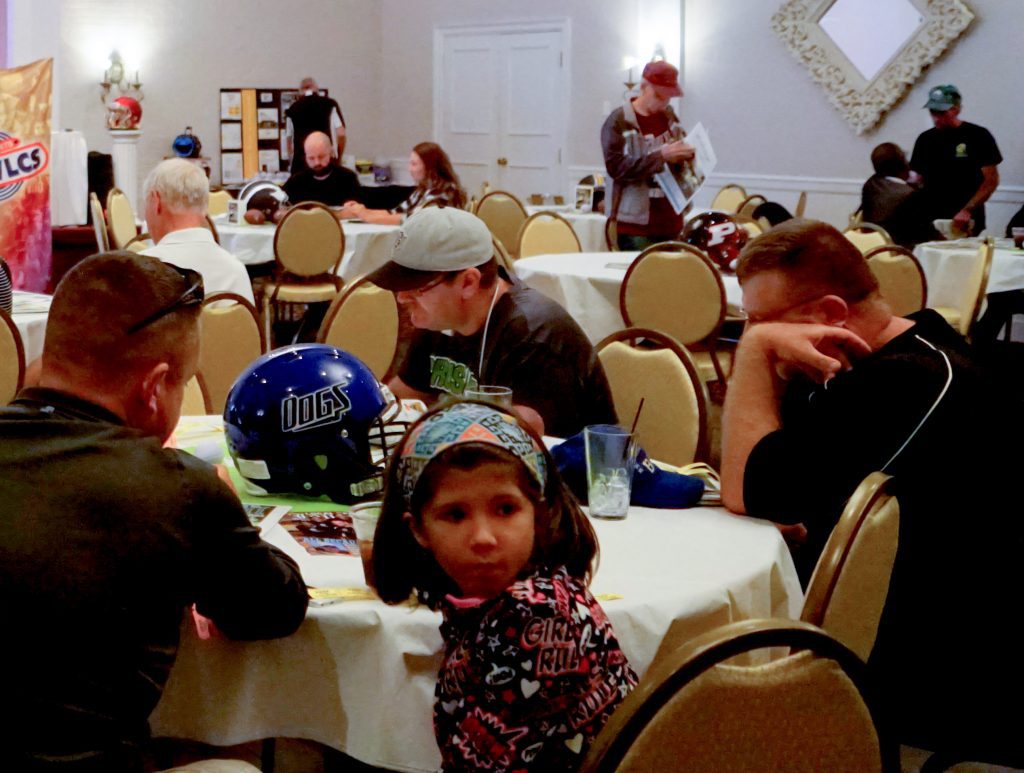 Andree (top middle) checks out his raffle tickets during the early stages of the LSJ’s kickoff party at Bella Maria’s on Aug. 18. Photo/Leo Valdez

“He pretty much knew what was happening when he saw the look on my face. He said, ‘You had the number, didn’t you?’ and I said ‘Uh huh.’ After the other guy won, I looked at the ticket way too many times for my liking. I had to go up and talk to (LSJ officials) after the party, but I was like, they will probably say ‘You snooze, you lose.’”

LSJ Publisher/Photo Editor Jason Goorman took down Andree’s number at the end of the football party, then contacted Langlois to see if the store could create a happy ending.

“Jason was one of the first fans to show up at the kickoff party, and he was very excited about the chance to win the chair,” Goorman said. “He told me throughout the evening how badly he and his mother needed to win that chair. When he came up to me after the party was over, with his winning ticket in hand, my stomach sank.

“The look on his face said it all. I thought about what I could do, and relaying the story to Langlois seemed like the best option. I didn’t think there was much of a chance we’d be able to do anything, but I knew Langlois has a deep-rooted tradition in Muskegon, and if anyone had a soft heart, they might.” 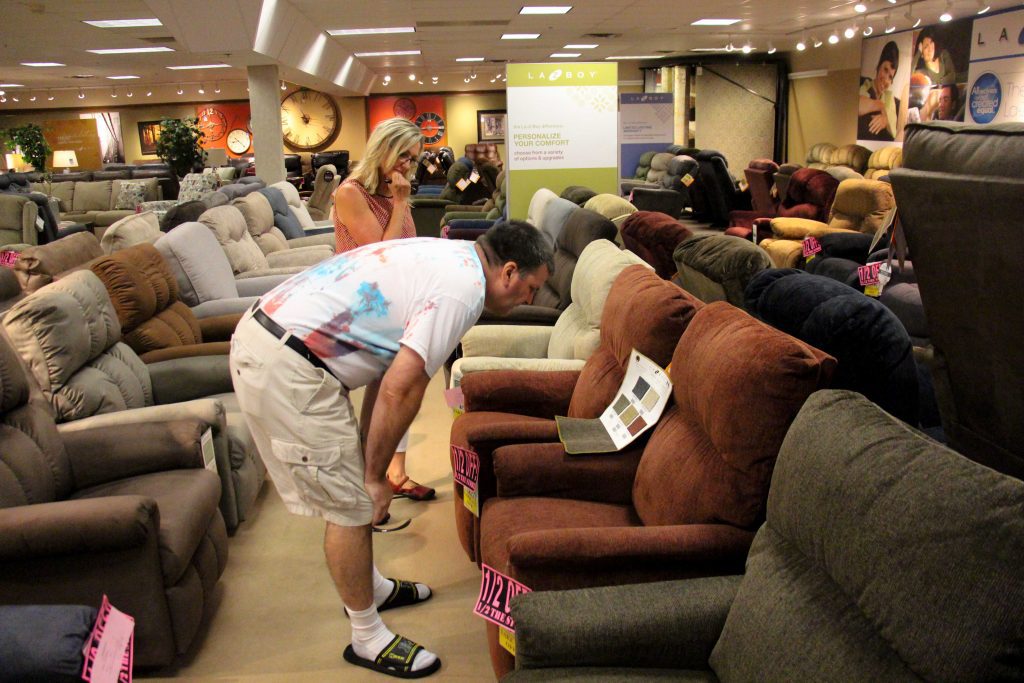 The folks at Langlois came through, just like they do in a lot of different ways for the community.

“From what I was told, he won but couldn’t respond quick enough, and the chair was given to somebody else,” said Laurie Langlois, a co-owner of the store. “I’m glad we were able to still give him one.

“I can’t imagine, the poor kid! I am just so glad we were able to come through for him, and I think he’ll really enjoy the chair. It’s just a very nice ending for a very nice guy.”

Andree said he was stunned when he received the phone call from Goorman, telling him he was going to collect his prize, after all.

“I told my mom after I got off the phone that Langlois was kicking in the chair, and she was ecstatic,” said Andree, who lives in Shoreline Landing Apartments on Grand Haven Road. ‘We needed a chair pretty badly. The one we have has really been going downhill. We’ve had it for 10 years.

“That was really nice of Langlois. In a million years, I never thought it would happen. I am quite impressed with Langlois. They are really thoughtful, and they want to help out the community.”