Hesperia was a contrast in styles: the Panther’s power

versus the Norsemen’s speed.

Both sides made strong arguments, but in the end the visiting Norse overcame several first-half mistakes and battled back from a 14-point deficit to win a 28-27 overtime thriller.

“We were a little shell-shocked in the first half, yeah,” said Norsemen Coach Larry Witham after the exciting win. “But we made some adjustments, and depth really helped us down the stretch. We needed all 27 guys tonight.”

After a scoreless first quarter, Panthers linebacker Gerrit Yates grabbed a bobbled handoff and raced untouched for a 30-yard touchdown. 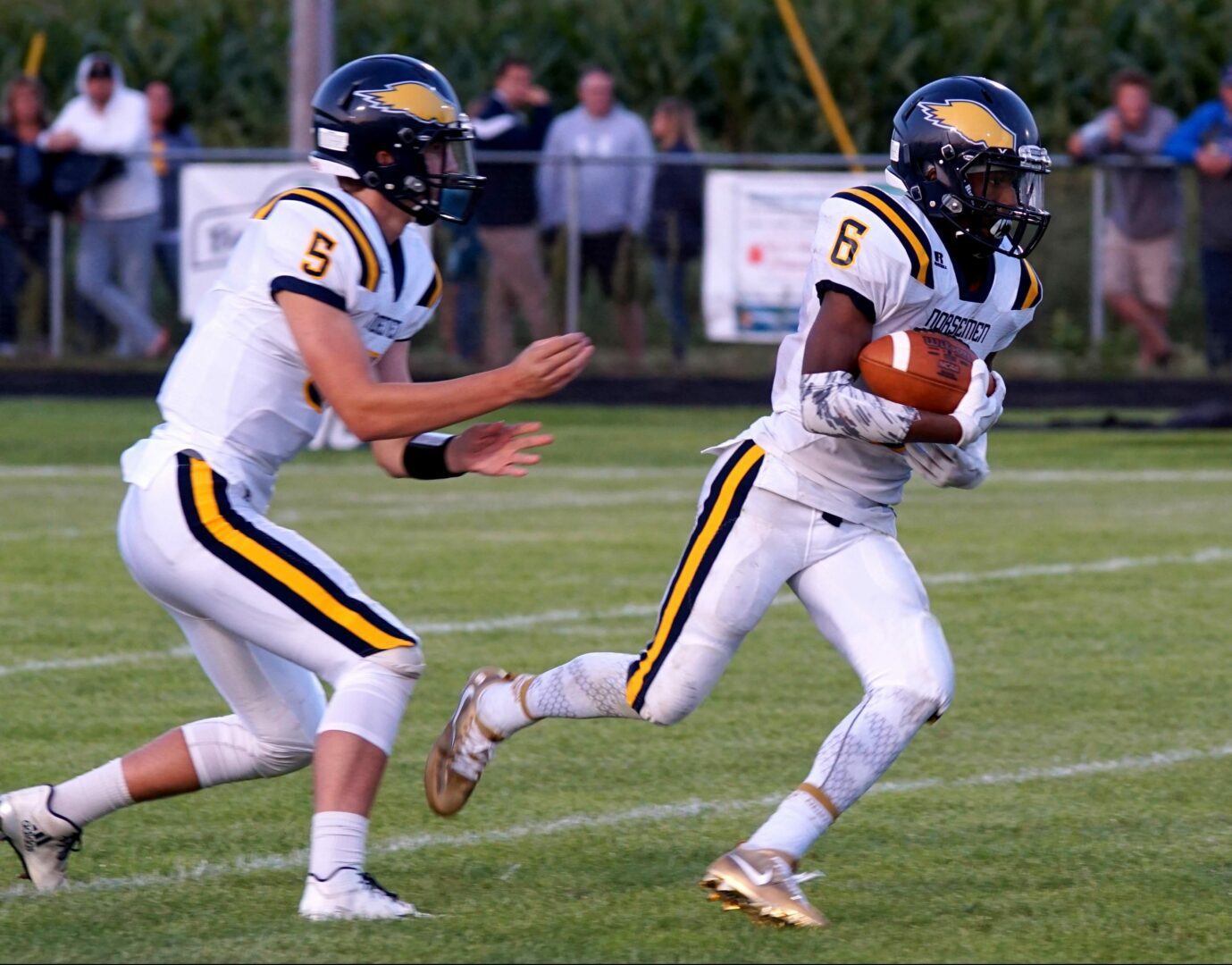 That strategy paid off when senior Kanin Witte capped off a six-play, 59-yard drive with a powerful 18-yard touchdown run, giving Hesperia a 14-0 halftime lead.

North Muskegon’s defense struggled against the run, but intercepted the Panthers three times. In the third quarter, North Muskegon’s Brennan Moat picked off a pass and ran 80 yards for a pick-six to put the Norse on the scoreboard.

The Panthers led 14-7 after three quarters, and kept pounding the football. They used nine running plays to go 58 yards in the fourth, and Witte capped off the drive with a five-yard touchdown to give Hesperia a two-touchdown edge.

But the Norse kept fighting back. Junior quarterback Jesse Cooke found Chandler Edwards wide open in the flats for a 57-yrd touchdown pass. Then it was TJ McKenzie’s turn to change the game.

North Muskegon’s junior cornerback made a key interception on a potential game-winning Panther drive, then hooked up with quarterback Mack Young for a game-tying 12-yard touchdown completion with 2:28 left in regulation. 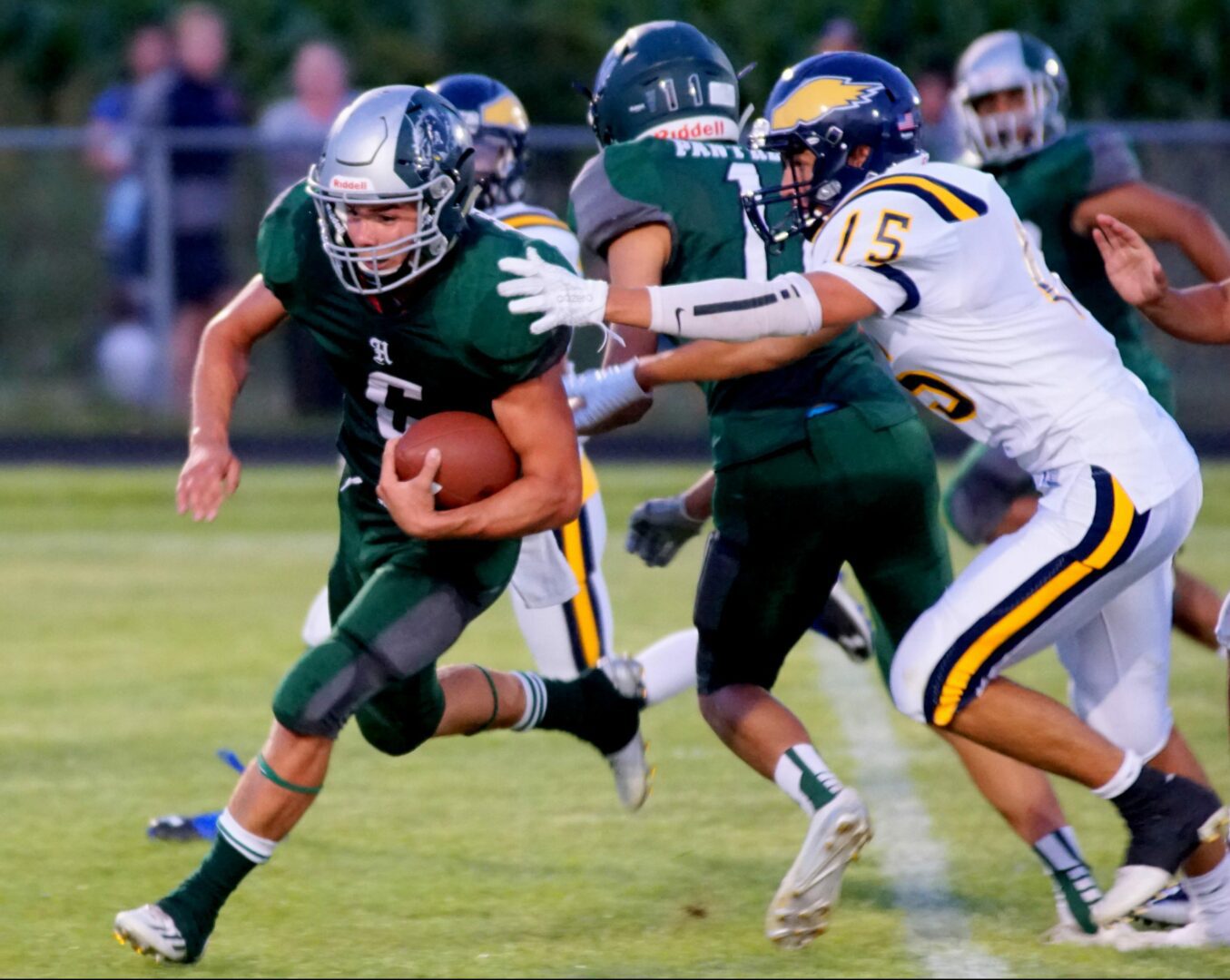 Young, who rotates with Cooke at quarterback for the Norse, completed 8 of 16 passes for 124 yards.

The score was 21-21 at the start of the overtime session. North Muskegon got the ball first, and Young hit De’Shary Warren on a cross pattern for a six-yard TD, and  the Norsemen led for the first time in the game, 28-21.

Hesperia needed one play to answer. Despite leaving the game three different times with a right ankle injury, Yates busted in for a 10-yard touchdown. He finished with 121 yards on 20 carries.

The Panthers decided to go for the two-point conversion and the victory after Yates’ score. But this time Yates was stopped at the line of scrimmage and North Muskegon snuck out with a 28-27 victory.

“We could have gone into another overtime, but I looked into their eyes and asked them what they wanted to do,” Bolles said. “I knew they were gassed, and they all said, ‘Let’s win it right here,’

“We learned a lot tonight.” 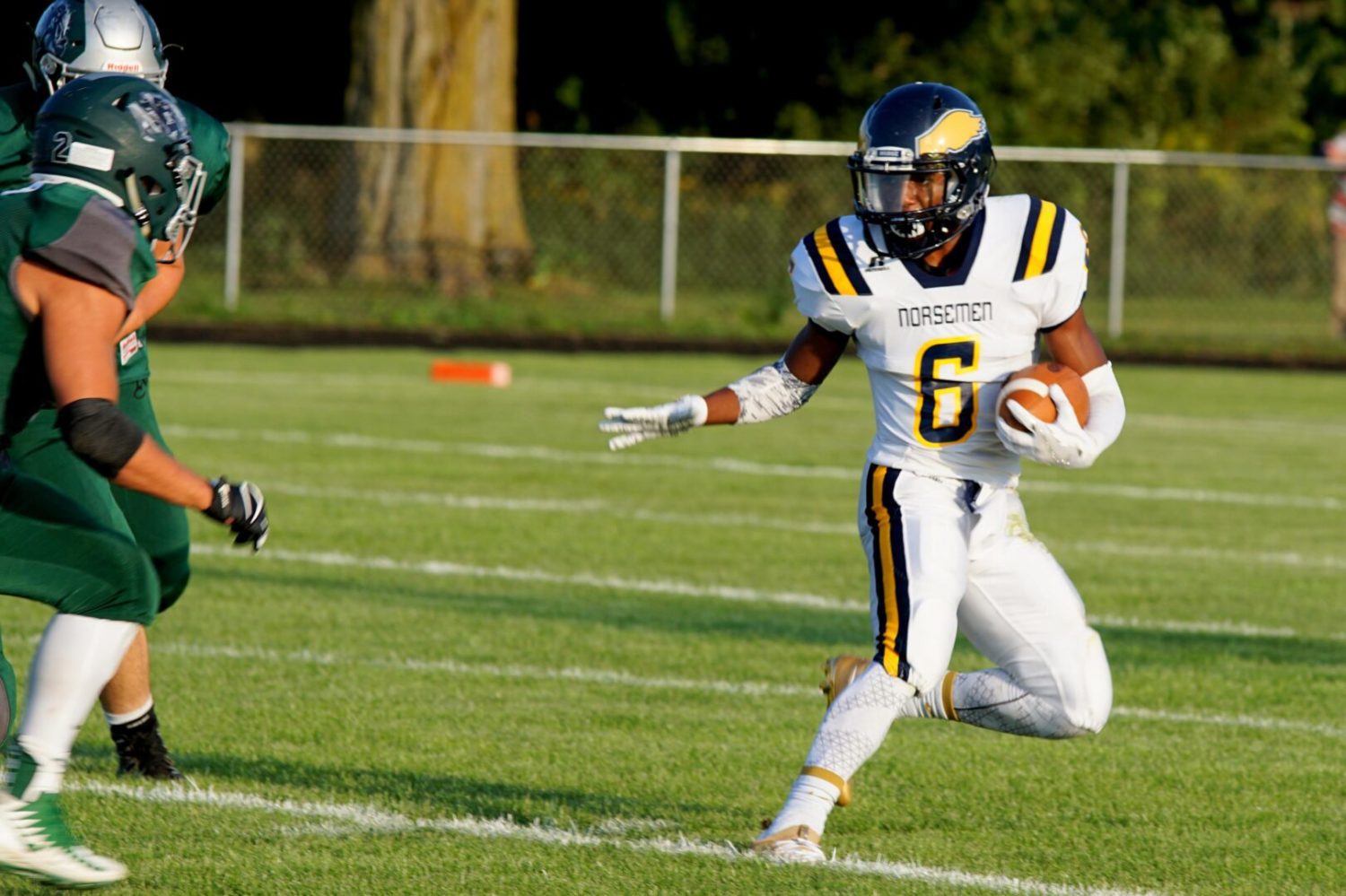 Chandler Edwards gets ready to maneuver against the Hesperia defense. Photo/Leo Valdez 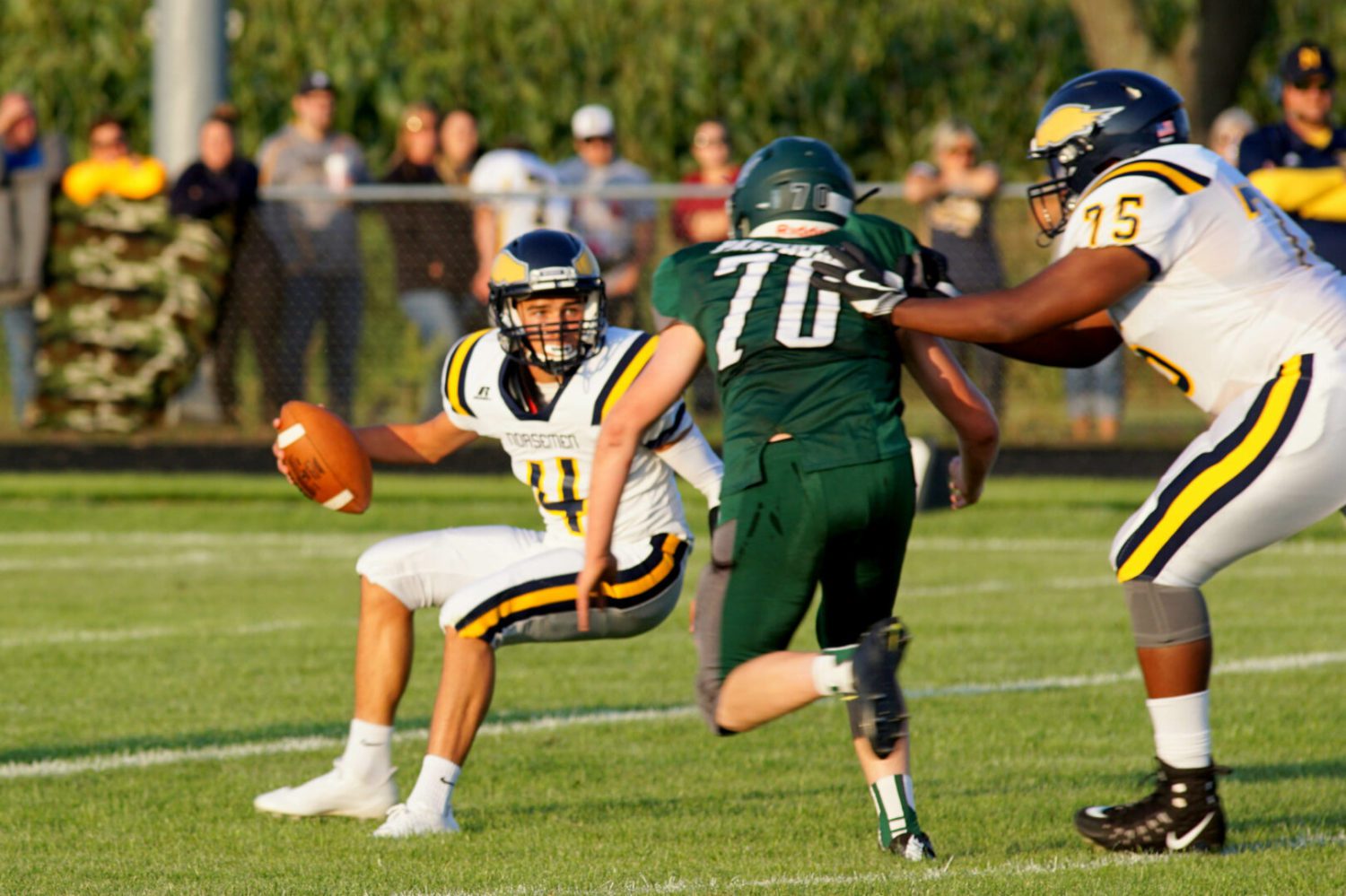 Mack Young looks for room to run for North Muskegon with Hesperia’s No. 70 Triston Rubin fighting past No. 75 Justin Edwards. Photo/Leo Valdez 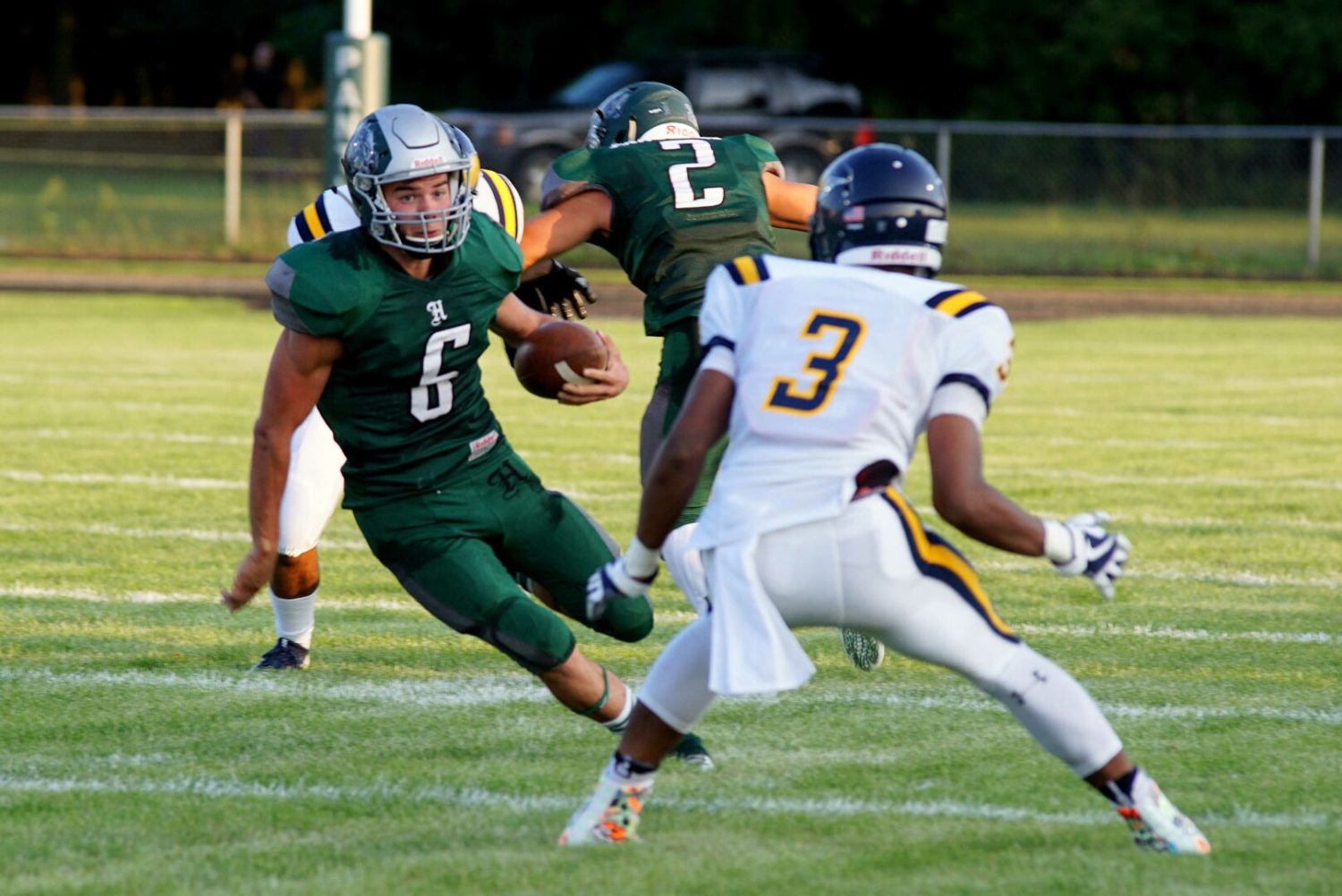 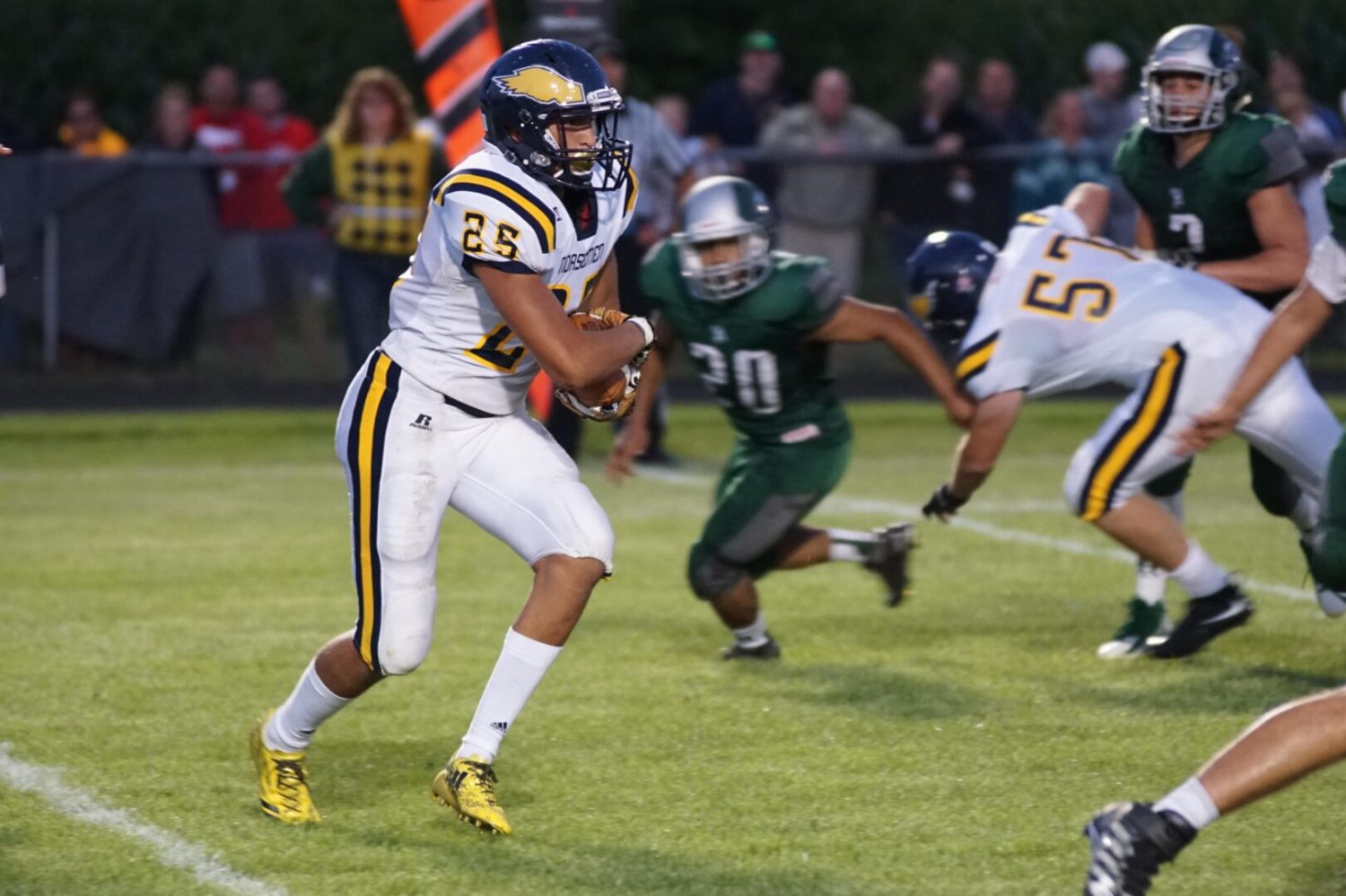