MUSKEGON TOWNSHIP – When it comes to academics, Orchard View’s Jayden Day said the keys to success are planning, keeping a schedule, and focusing on the task at hand.

That sound strategy has obviously worked wonders for the Cardinals’ soon-to-be-senior. He carries a grade point average over 3.9 and is considering going to college at one of several elite Ivy League schools.

“My schedule has definitely been hectic at times,” Day said. “But what it boils down to, if I want to get work done at a high level, I need to organize as much as possible and have it planned out.”

Day’s varsity football career was also designed for that kind of success, but injuries and disappointing results on the field have taken their toll.

Yet Day’s tremendous talent has never been in doubt, and he’s ready to roll into his senior season. The Cardinals open their 2017 campaign at home Thursday night in a non-league clash with Sparta. 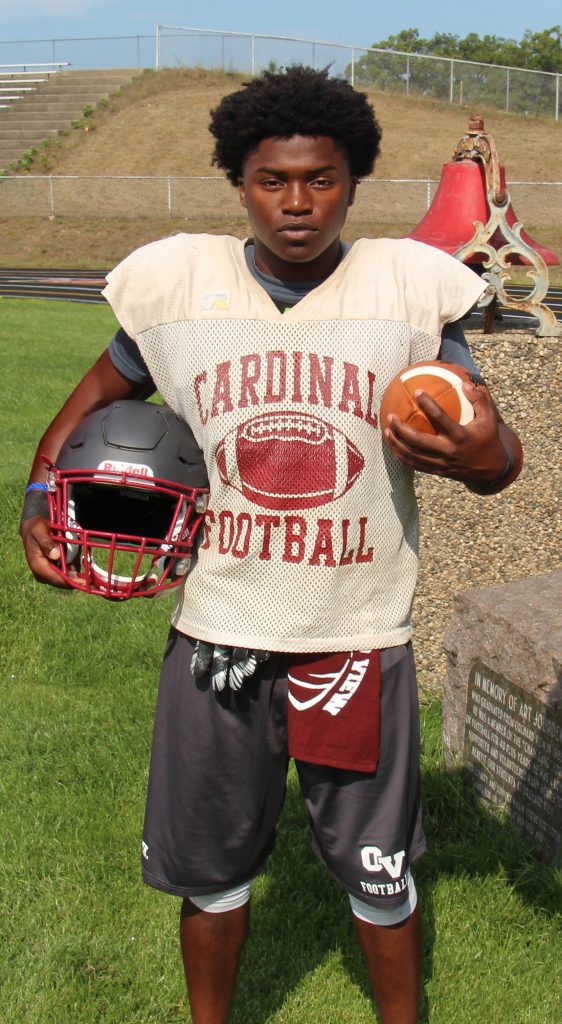 Day’s varsity football career began with a great deal of promise. He was named the Cardinals’ starting quarterback as a freshman, and promptly led his team to a stunning upset of powerful Montague in his first game in 2014.

Day sealed that big victory when he threw an 18-yard touchdown pass to teammate Mike Parker with four seconds left on the clock.

He had other big games that year, throwing touchdown passes of 85 yards and 66 yards against Ludington, and rushing for two touchdowns, including a 66-yard romp, against Manistee.

“His very first game, he was named the player of the week by (WZZM) Channel 13,” said Orchard View head coach Joe Tanis. “That set the stage pretty high for him.”

Day’s unusual maturity as a ninth-grader made the coaches comfortable about handing him the keys to the offense so early.

“It 100 percent had to do with his leadership and his work ethic, which are two things I value the most in a player,” Tanis said. “For a 14-year-old to earn the trust of his teammates in such a short time, that says a lot.”

Orchard View coaches recognized Day’s versatility on the gridiron, and began to use him as a running back and receiver in his sophomore year. After posting five wins in 2014, Day and the Cardinals seemed set for even bigger accomplishments in 2015.

But they turned in a disappointing 3-6 record, and things got even tougher last season when Orchard View went 2-7 and Day limped through most of his junior campaign with a hamstring injury.

Despite the problems, Day has been a Lakes 8 All-Conference selection at various positions throughout his career. Now his senior season has arrived, and he’s determined to make the most of it.

The 5-foot-9, 185-pounder could line up all over the field offensively, but will mostly play running back and see a lot of snaps at linebacker on defense. 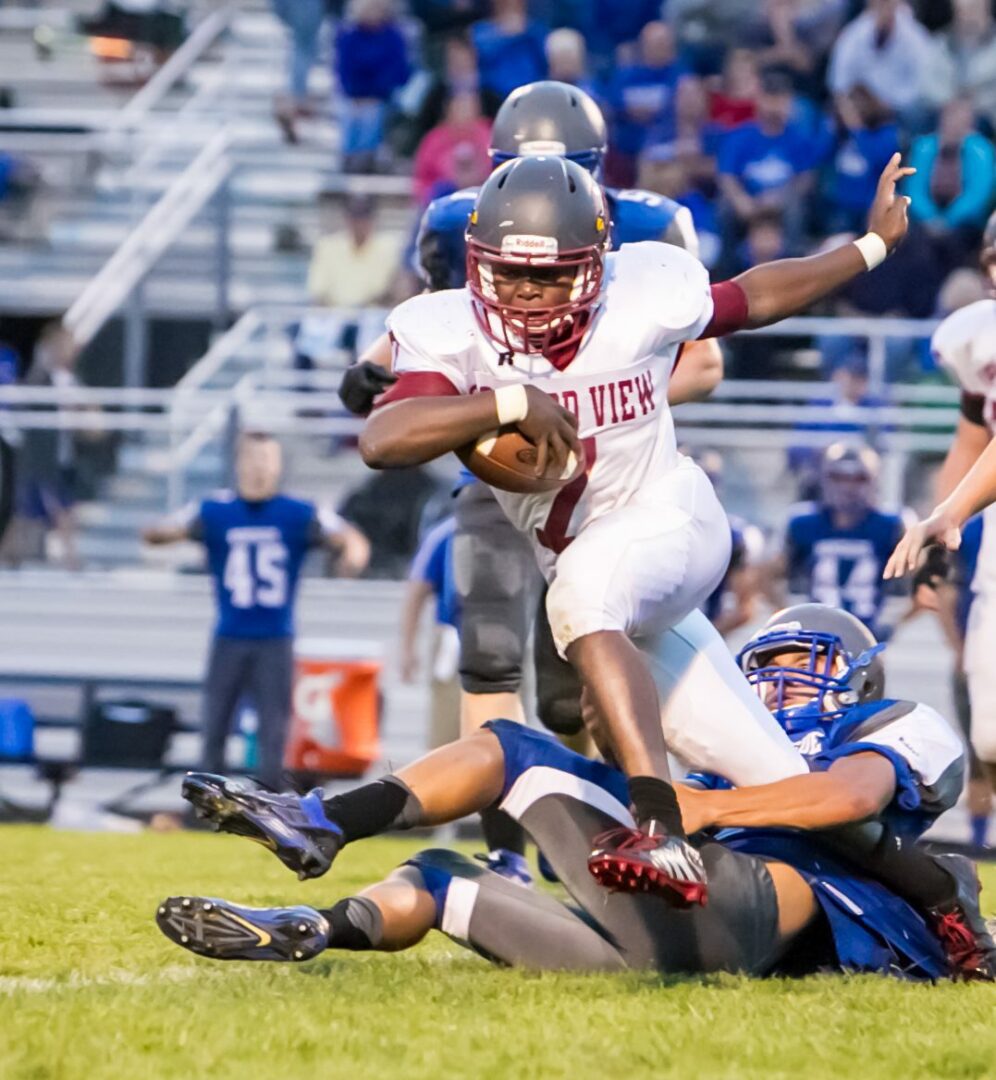 Jayden Day on the Orchard View rush against Montague during the 2015 season. Photo/Tim Reilly

Day enters the season with a few nagging injuries, but is expected to play in the opening game.

“He’s a tough, physical runner,” Tanis said. “He’s got deceptive speed. I don’t know if there’s one area where I can say ‘wow,’ but he’s really good across the board. He catches the ball well, he’s just a complete running back.”

Orchard View will be facing a lot of challenges again this season, due to overall inexperience. Five sophomores and a freshman are expected to play prominent roles for the team.

But Day is optimistic about the Cardinals’ chances to gain more wins this season.

“We haven’t got the wins we’ve wanted these last couple years, but we’ve made tremendous gains with our program, things that can’t be valued by just wins and losses,” he said. “The culture is changing around here. The coaches have done a great job of getting kids to buy in.

“We’ve got more kids than ever coming in the offseason in the weight room. We’re building relationships throughout the school and with our teachers, and helping with community development. We’re getting more people excited about this program again. With all the positive changes, I feel the wins will translate onto the field soon enough.”

Day said he’s excited to line up behind sophomore quarterback Edmari Mitchell, whom he calls a “cerebral player.” 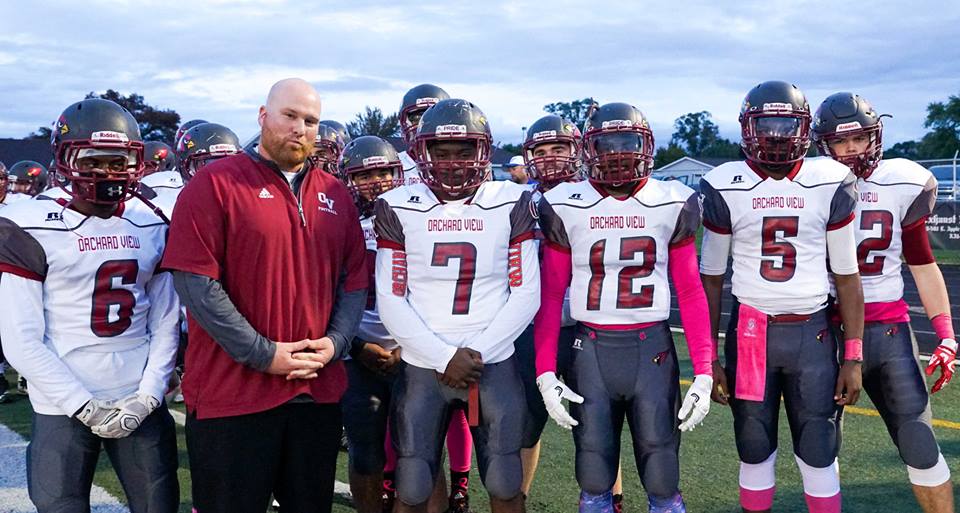 No. 7  Jayden Day stands with coach Joe Tanis and the rest of the Orchard View team before a game last season. Photo/Leo Valdez

“Smart with the ball,” Day said of Mitchell. “He really developed a trust this offseason, with his dedication and the work he put in to get better.”

Day has taken a lot of the Cardinals’ underclassmen under his wing. He tells the younger players that unlike middle school or junior varsity football, they won’t be able to rely on pure athleticism to excel.

“You have to pay attention and mentally be locked in,” he said.

As for his future plans, Day is definitely locked in. He visited Cornell University in New York City this summer, and is considering other Ivy League schools for academics and football.

“He’ll get a scholarship academically wherever he goes, so he has a lot of options to go play this sport that he loves,” Tanis said.