HOLTON – The Holton football team had a pressing need for a placekicker.

On their first day of school, a little over a week ago, they attended their PE class taught by Jack Nummerdor, Holton’s athletic director and head football coach.

Suddenly they found themselves on the varsity football team, with very important duties – kickoffs, extra points, and crucial field goals.

They suited up for last week’s game against Kent City, but were not eligible to play. 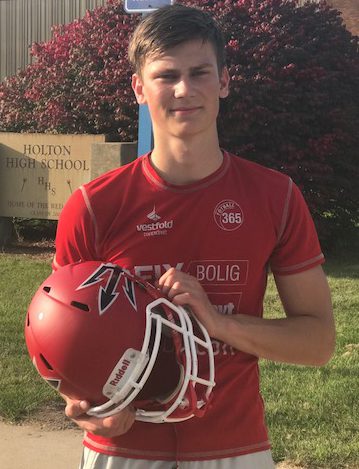 But they will be active for Friday’s home game against archrival Hesperia. They will be sharing placekicking duties, even though neither had ever attended a football game before last week, much less played in one.

“(Nummerdor) asked us if we were new to the district, and we said we were exchange students, and we got into this conversation about sports,” said Kluever, who comes from Hamburg, Germany. “He told us the team needed a kicker. He asked if we had played sports at home, and we said yes, soccer. He was pretty happy and said we should come to practice that night and try out.”

“We haven’t been able to kick a field goal,” said Nummerdor, whose 1-2 team has not attempted a field goal this season, and has only one PAT kick. “We will get to the 20 or 15 and we don’t get any points. This is a very big deal for us.”

There’s a difference between kicking a football and a soccer ball, but Kluever and Kristiansen said they’ve been doing well in practice. They’ve both hit field goals from the 35-yard line, and think they can improve their range as the season progresses.

“We’ve never played football and we did pretty well,” said Kristiansen, who comes from Holmestrand, Norway. “It’s the same movement (as kicking a soccer ball), kind of, you just need to know where to kick the ball.” 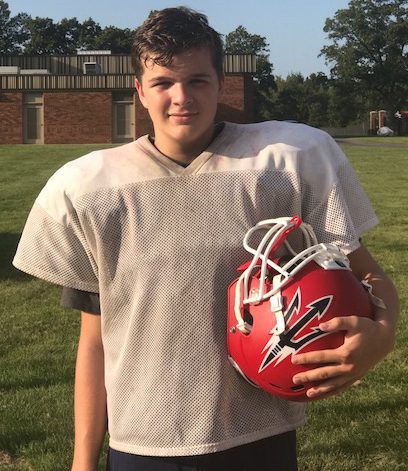 Kicking a field goal in practice, with nobody trying to block it, is one thing. Doing so in a game, with 11 large defenders trying to plow through the line to disrupt the attempt, is another matter.

But the boys say they’ve kicked against a live defense in practice, and it’s no big deal.

“You don’t need to take too many steps back (when preparing to kick),” Kristiansen said. “If you know how to kick a ball, you can kick it standing still and still get it high enough.”

They say they’re not worried about being roughed up during a field goal or PAT attempt, which sometimes occurs.

“If you have good protection, you don’t really have to worry about it,” Kluever said. “If it happens, you’re not going to die from it.”

Kluever and Kristiansen have had some interesting experiences in practice so far.

They were challenged to kick a field goal from about 30 yards out, with the entire team gathered around. If either kick missed the mark, the team had to run an extra lap around the field.

They both missed, and everybody ran.

“I couldn’t concentrate,” Kleuver said. “I had the length, but it went outside.”

They’ve also been working out at other positions during practice, like wide receiver and cornerback.

On one play Kristiansen found out what it’s like to take a hit in football. He wound up on the ground and saw stars for a moment or two – but said he really didn’t mind.

“I was playing cornerback, and I didn’t really know what to do,” he said. “I was running toward someone, and I forgot to lower my head, and he came up with his helmet on my chin. That was a big hit. It was really fun, actually. I got the feeling of what American football is really like.”

Kluever and Kristiansen both realize football kickers can find themselves in high-pressure situations, with games on the line. They say they’re nervous about missing an important kick, but disagree about how their teammates might react.

“The team is so nice,” Kluever said. “I know they are going to count on me, but even if I miss an easy one, I’m going to make the next one. They’re not going to be mad at me.”

“I think they will be mad if we mess up,” Kristiansen said. “When you’re at the 25, everyone expects you to make that. If you miss people will be disappointed. That makes me feel pressure. I don’t want to disappoint my team.”

Both boys also understand the intense rivalry between Holton and Hesperia, and very much want to help their team beat the Panthers on Friday.

They say they’ve already learned to dislike Hesperia, “At least when the match is on – I mean the game,” Kristiansen said.