NORTH MUSKEGON – After one half of soccer on Thursday, North Muskegon and Oakridge looked pretty evenly matched.

But North Muskegon had Dylan Hoffman on its side, and that made all the difference.

The senior midfielder, who was an understudy to All-Stater Justice Sikkema last year, broke open a scoreless game with three goals in the second half, leading the Norse to an impressive 3-0 victory over the Eagles in West Michigan Conference play.

“He was a quiet, unsung hero last year, and this year’s he’s had to put the load on himself,” said North Muskegon Coach Jeremy Tjapkes about Hoffman. 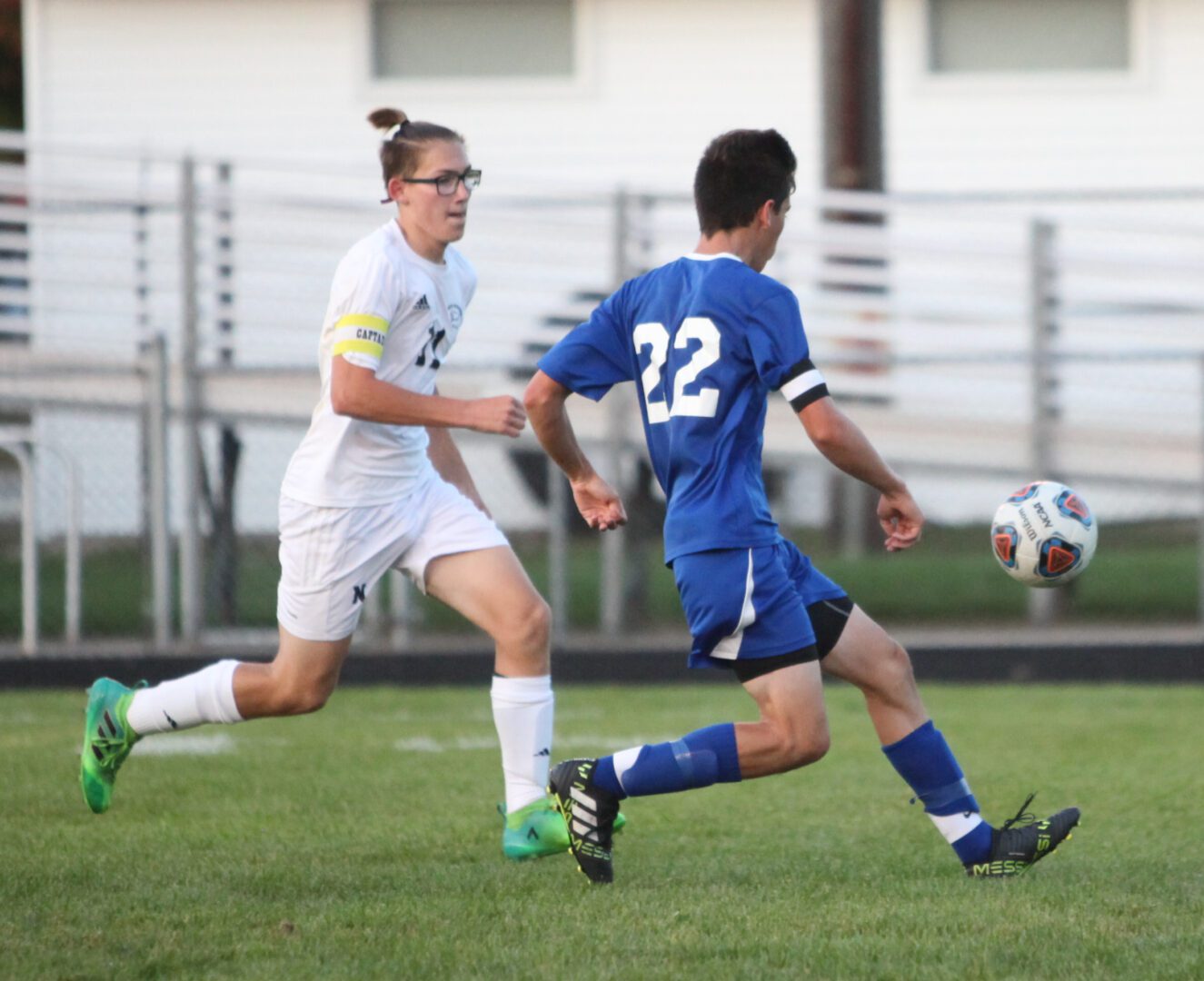 Going into the new season, the outlook was hazy for North Muskegon, which shared the conference title last year with Shelby. The Norse lost 12 seniors to graduation, including the high-scoring Sikkema, and some fans probably figured they were in rebuilding mode.

They’ve had their ups-and-downs this year, but they are perfect in the conference with a 4-0 record. Tuesday’s 1-0 win over perennial power Whitehall, followed by Thursday’s win over Oakridge, left the Norse all alone on top of the standings, with a title repeat on their minds.

“It was a big learning curve – it still is,” said Tjapkes, whose team is 5-5-1 overall on the season. “But the kids are starting to buy in.

“We are 4-0 in the conference with two more games to go (in the first rotation of games). If we take care of business, the conference tournament will run through our field. We’ve taken our lumps and these kids don’t give up. They keep coming to practice and fighting and learning. It’s not how you start, but how you finish.”

The first half was scoreless but interesting, with lots of up-and-down action and good chances for both teams. The teams were even with four shots on goal apiece. 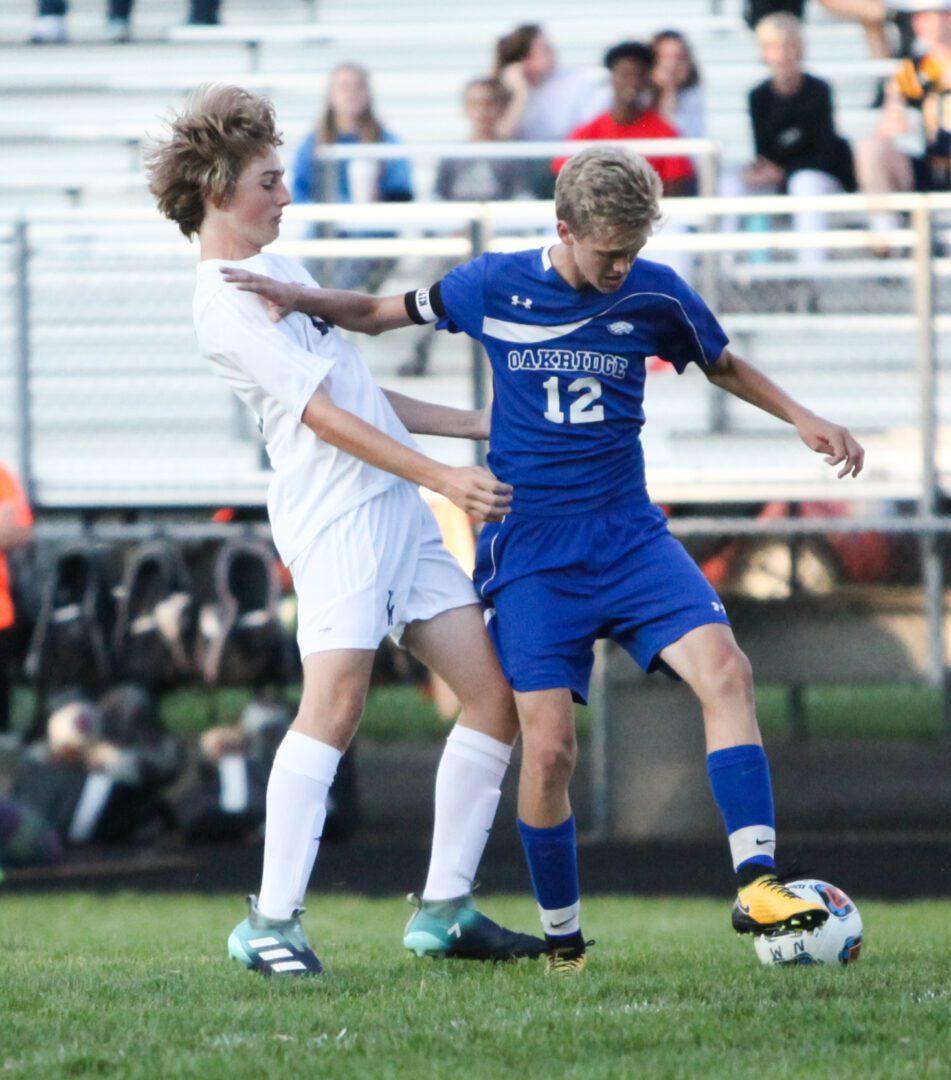 Hoffman collected his first goal about 13 minutes into the second half, when he picked up a loose ball in front of the Oakridge net and placed a shot to the right of the goalkeeper.

He made the score 2-0 about eight minutes later when he scored on a long shot from about 25 yards out.

Hoffman added his final tally with 2:29 left on the clock.

Trevor Shultz had two assists for North Muskegon while Ryan Kinahan had one.

Oakridge fell to 4-2 overall and 2-1 in the conference.

“I think we have the ability to compete at a very high level, but we haven’t done it for 80 minutes yet,” said Oakridge Coach Greg Fleener, whose team only has three seniors on the roster. “North Muskegon and Whitehall are the powers in the conference, and we’d like to compete with them, but it’s that 80 minute thing.” 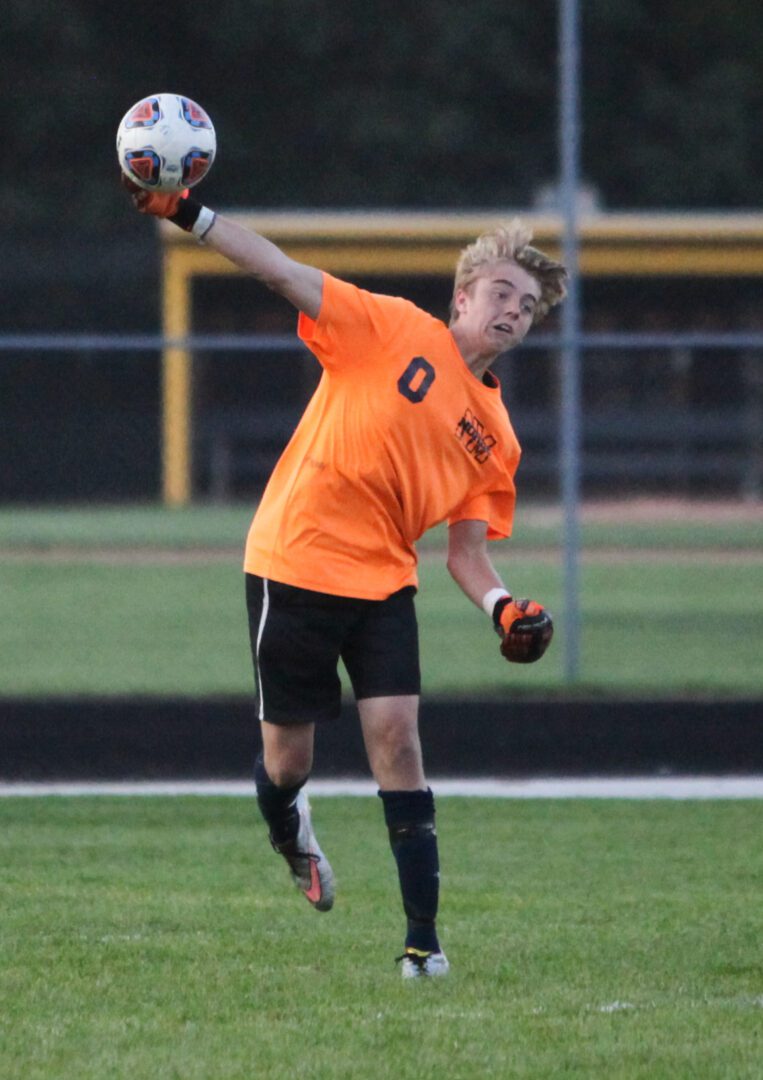 North Muskegon goalie Nick Gerstweiler throws the ball up field after posting the save. Photo/Jason Goorman 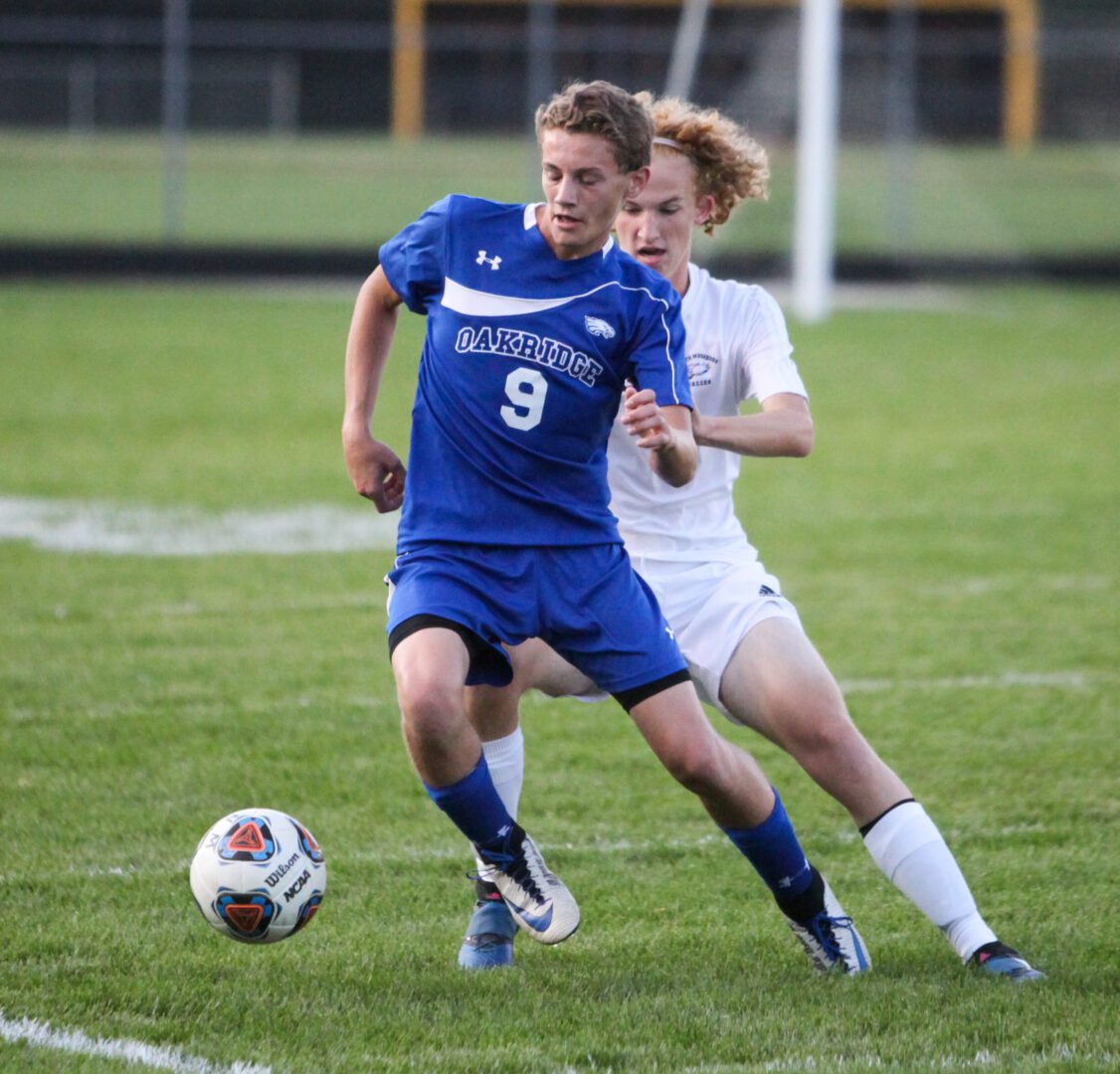 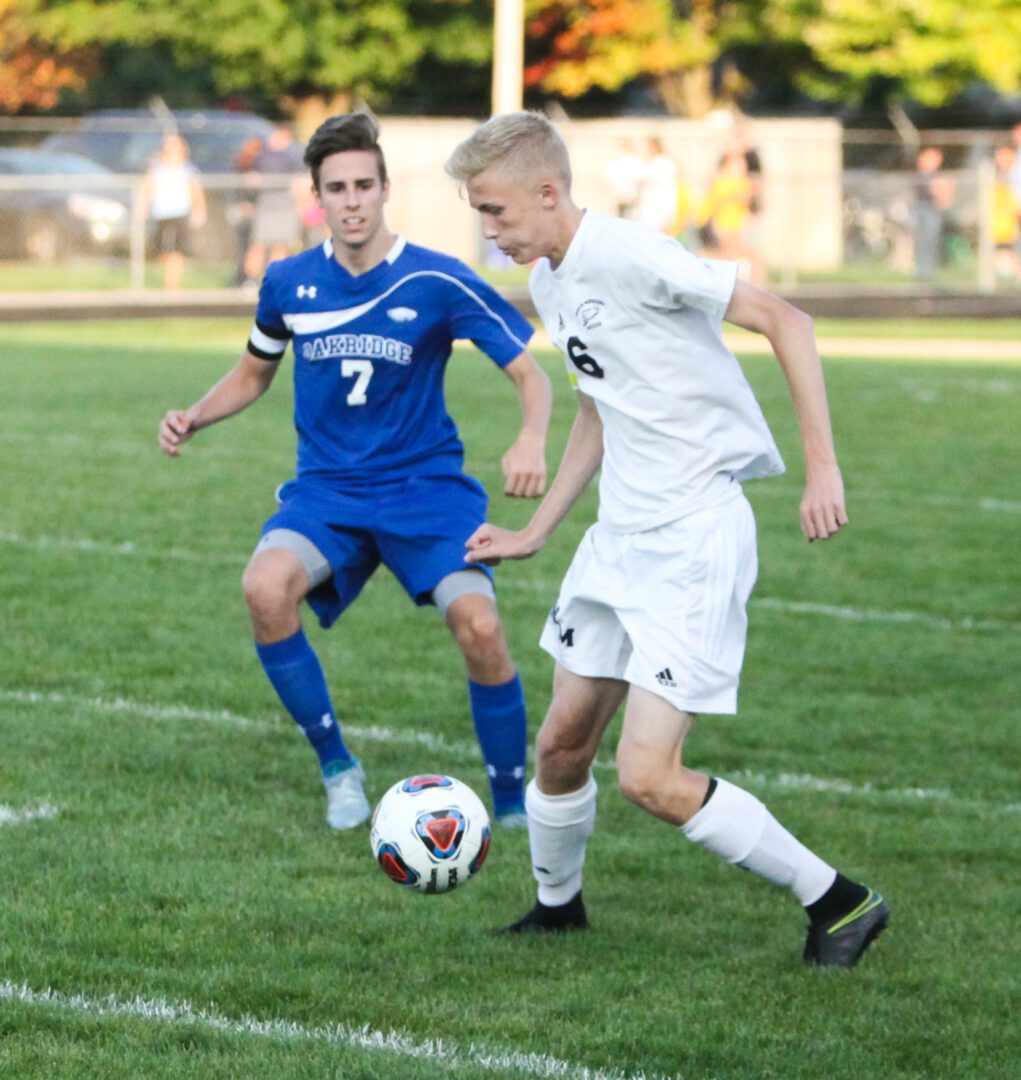 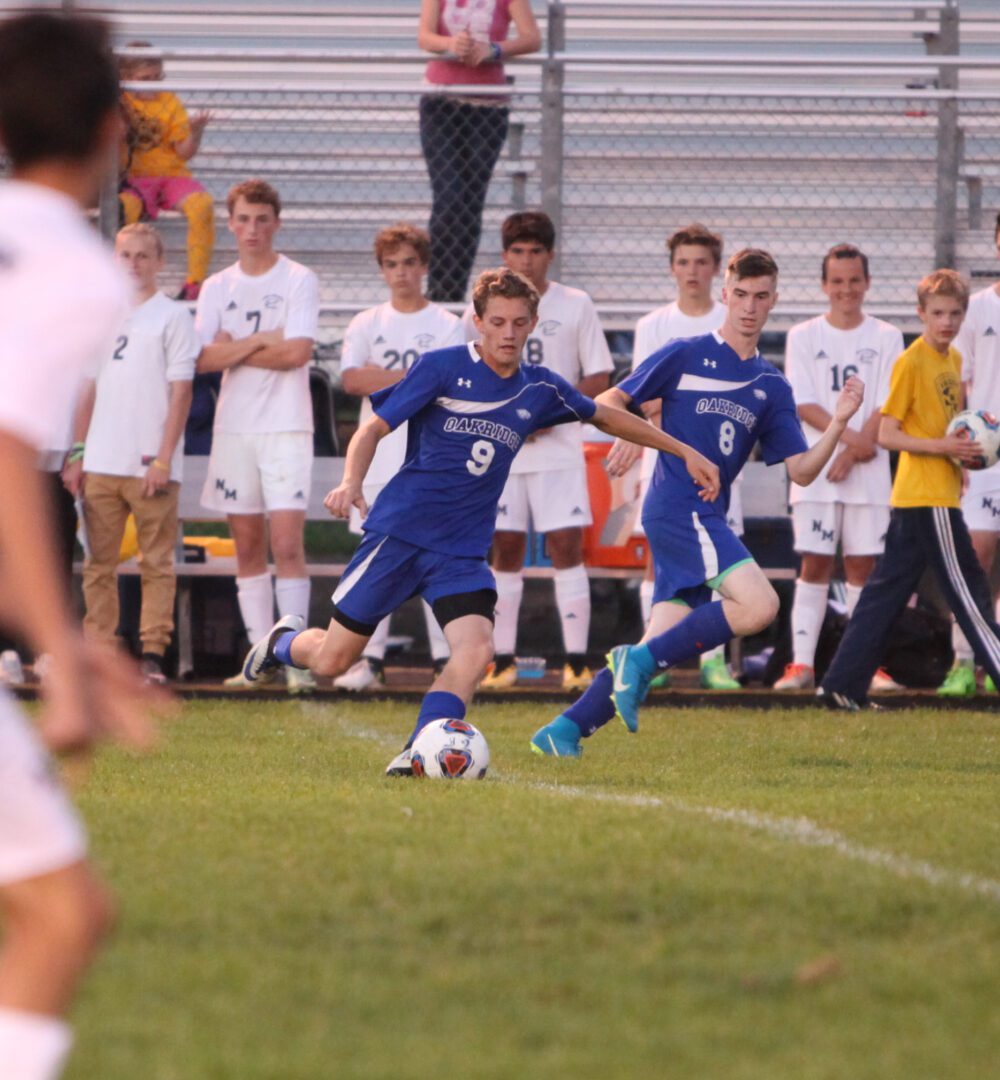 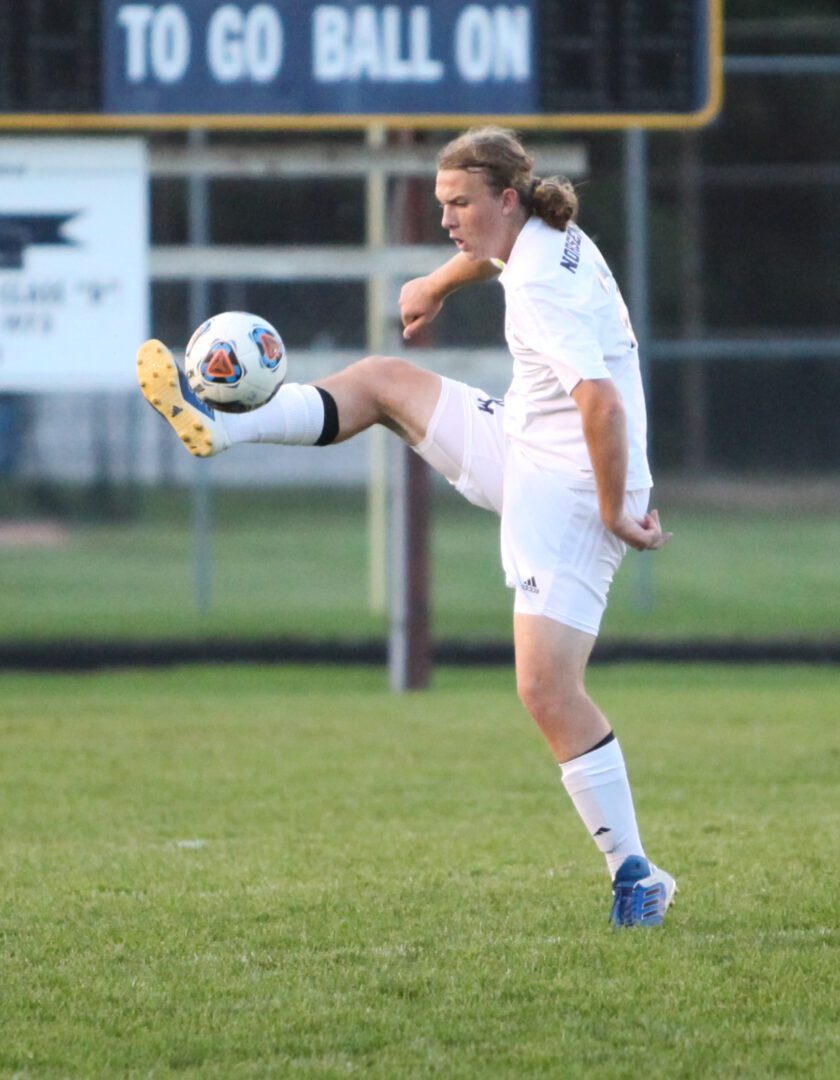 Henry Vanderwoude gets his foot up high to keep possession for North Muskegon. Photo/Jason Goorman 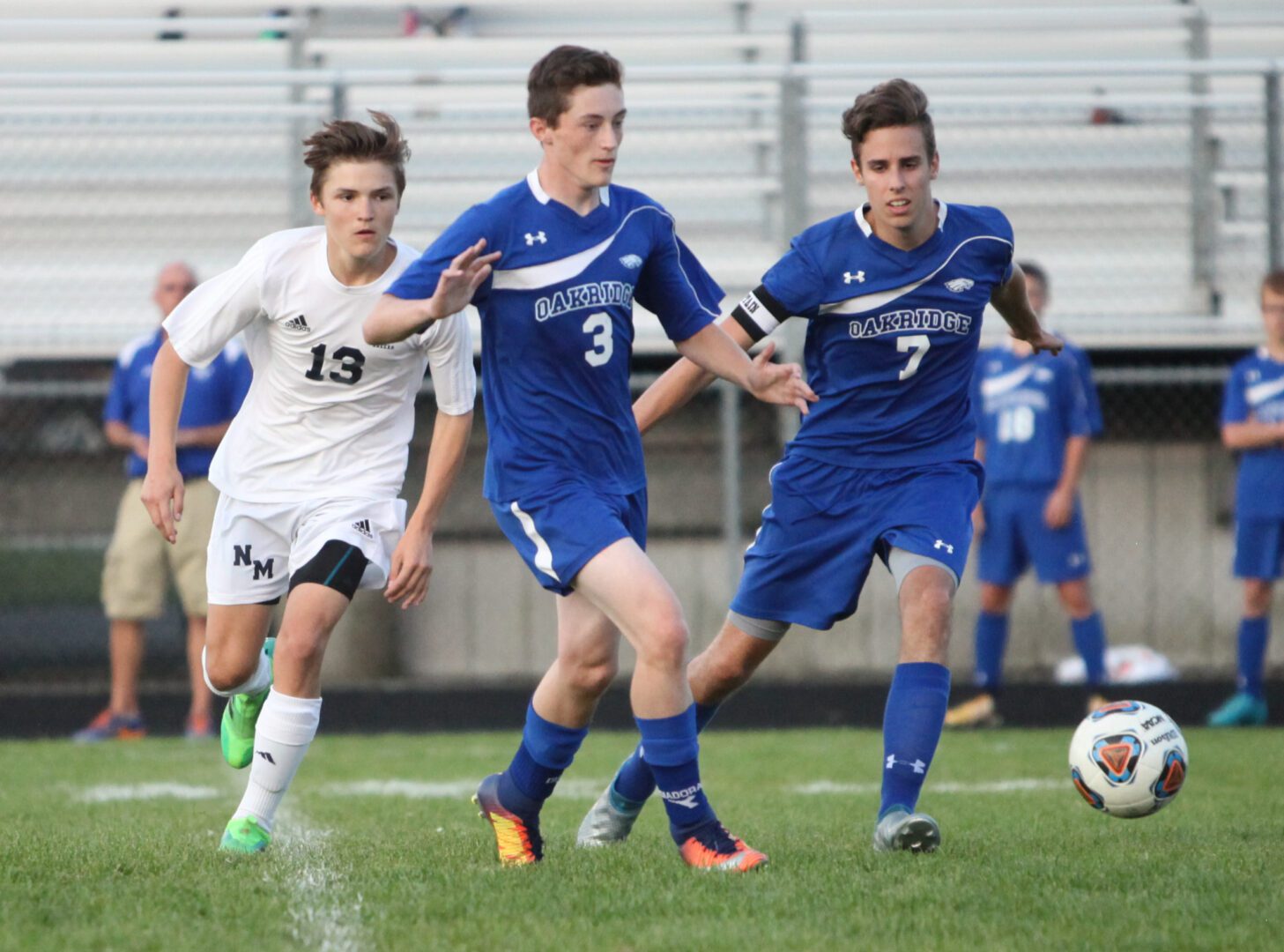 The Eagle’s No. 3 Dylan Lucas sends a pass in front of teammate No. 7 Jared Holter while North Muskegon’s Brody Hoffman pursues. Photo/Jason Goorman 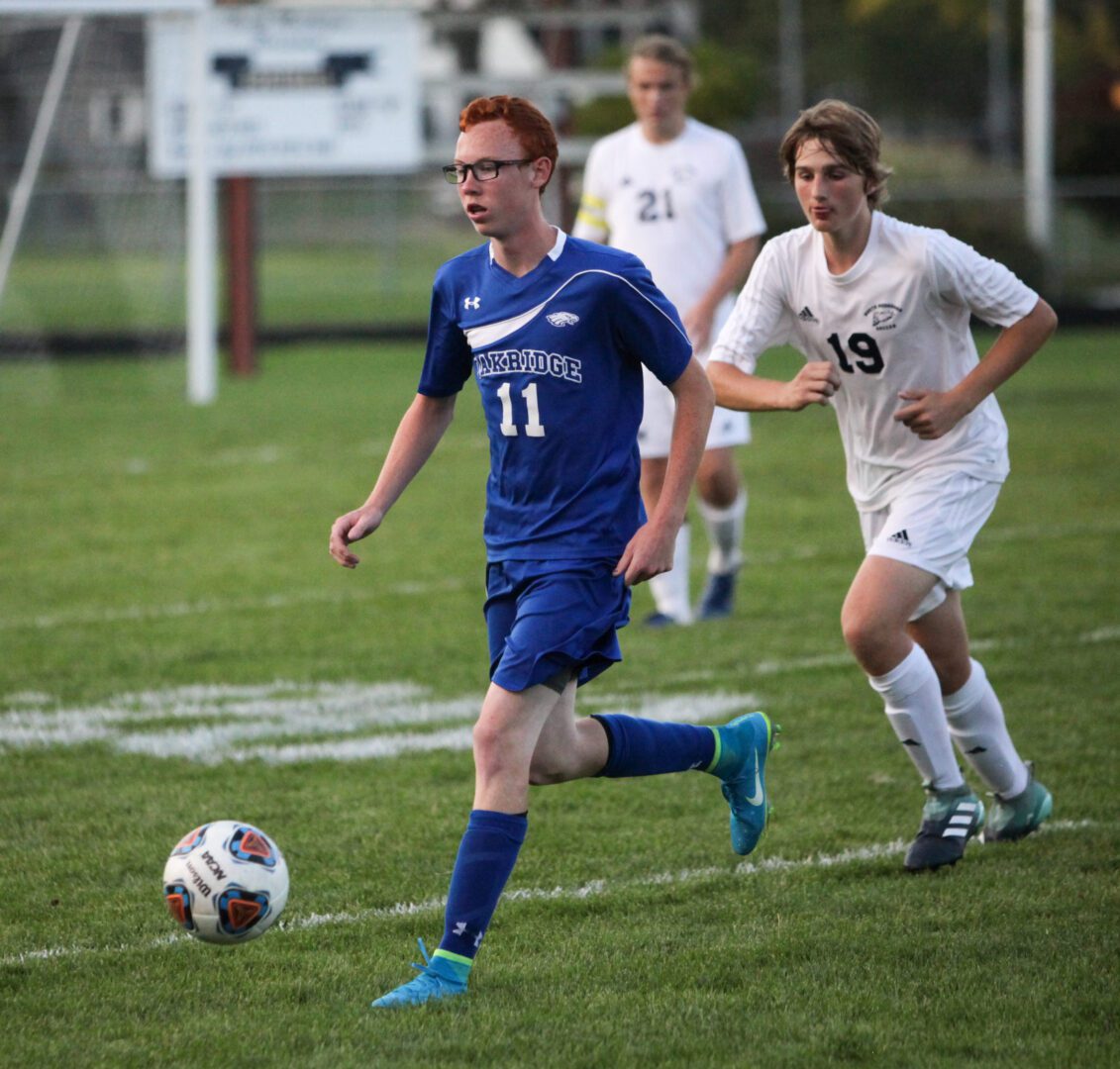 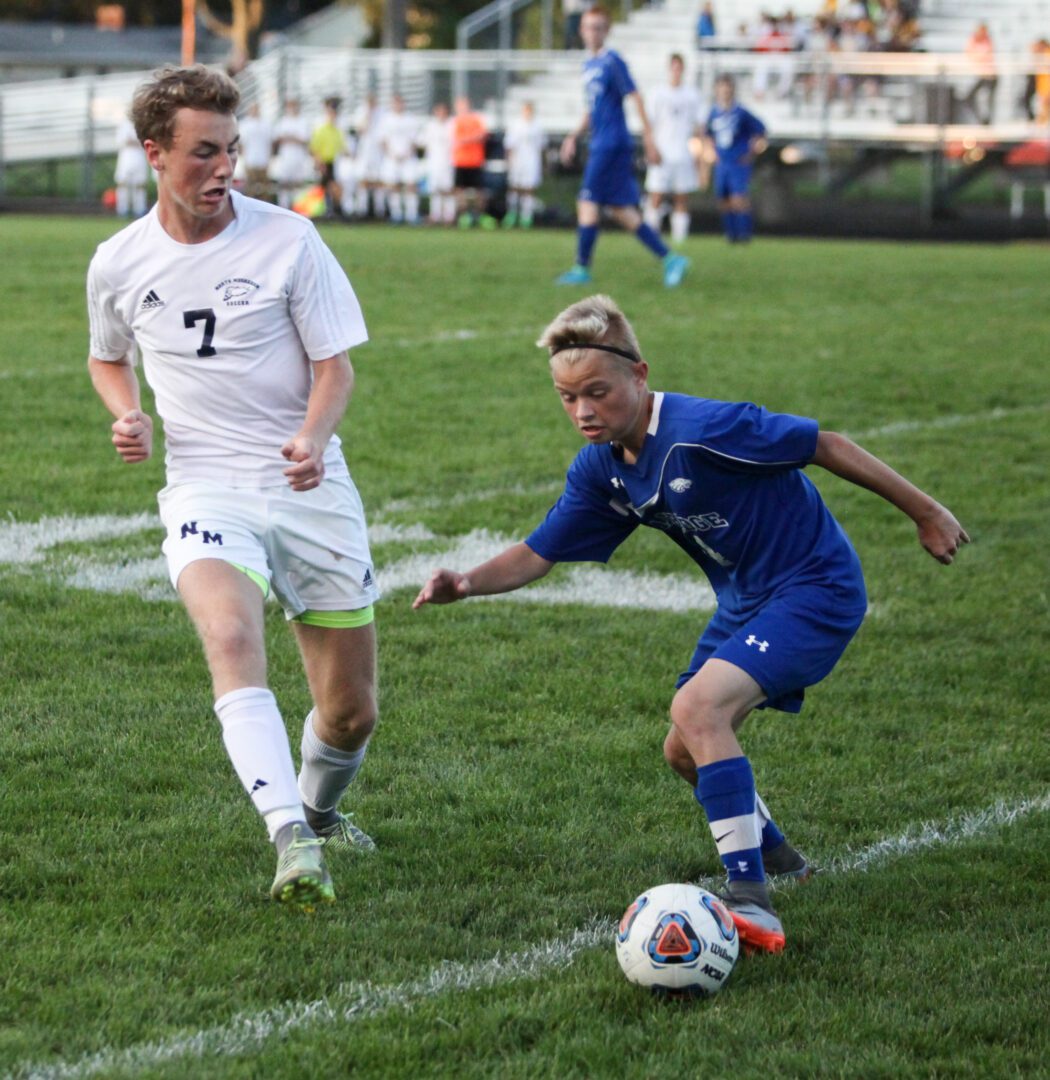 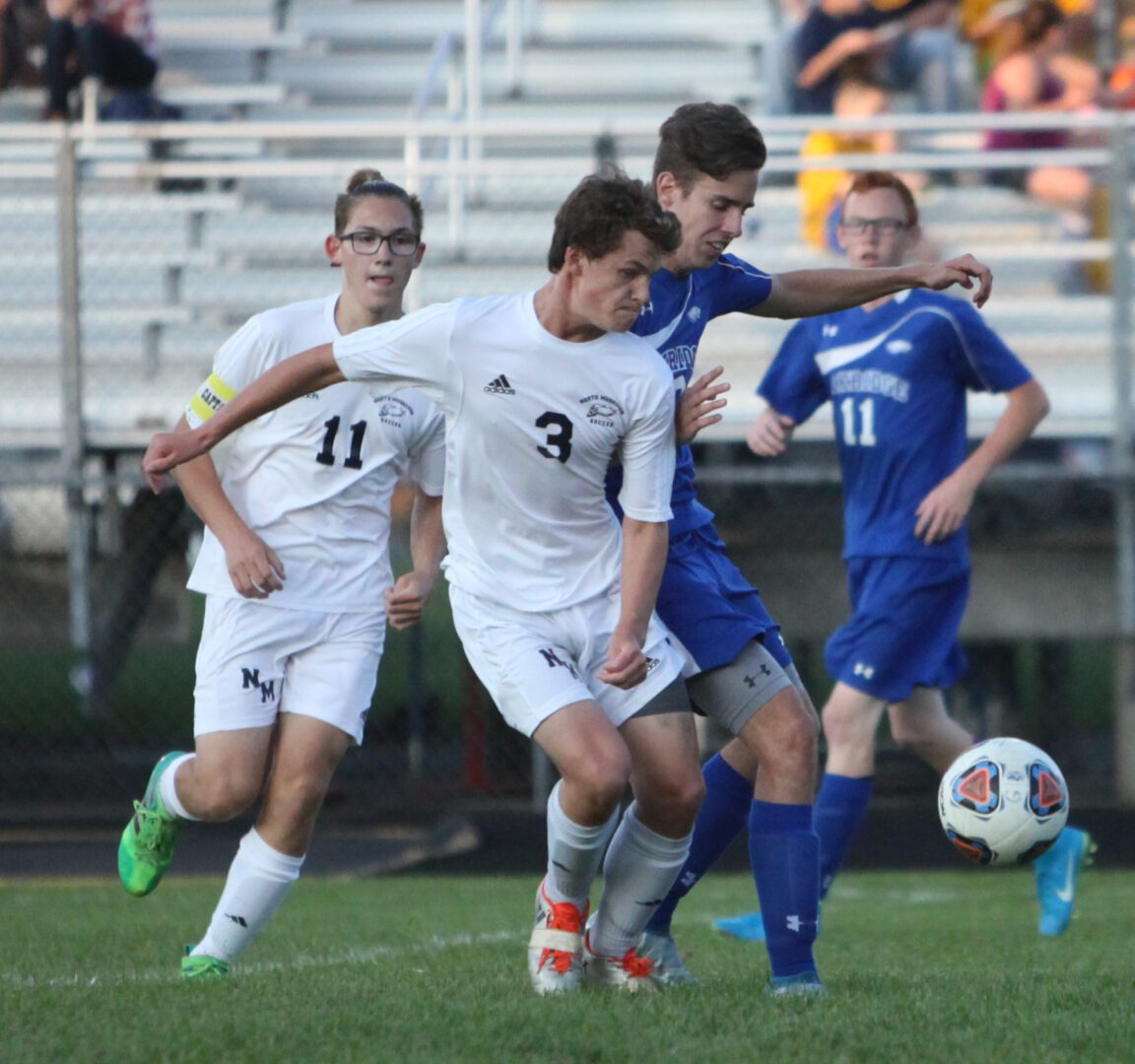 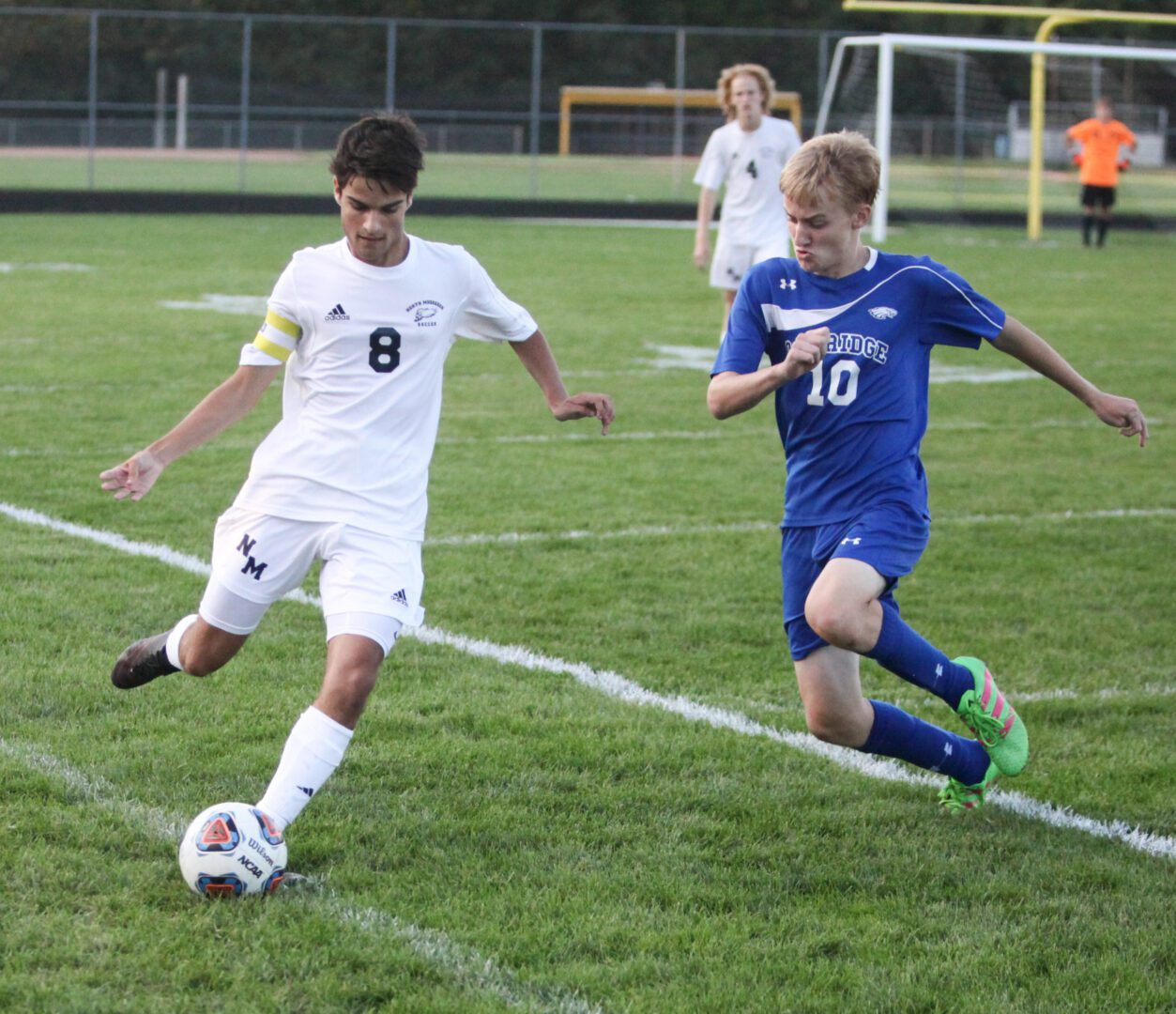