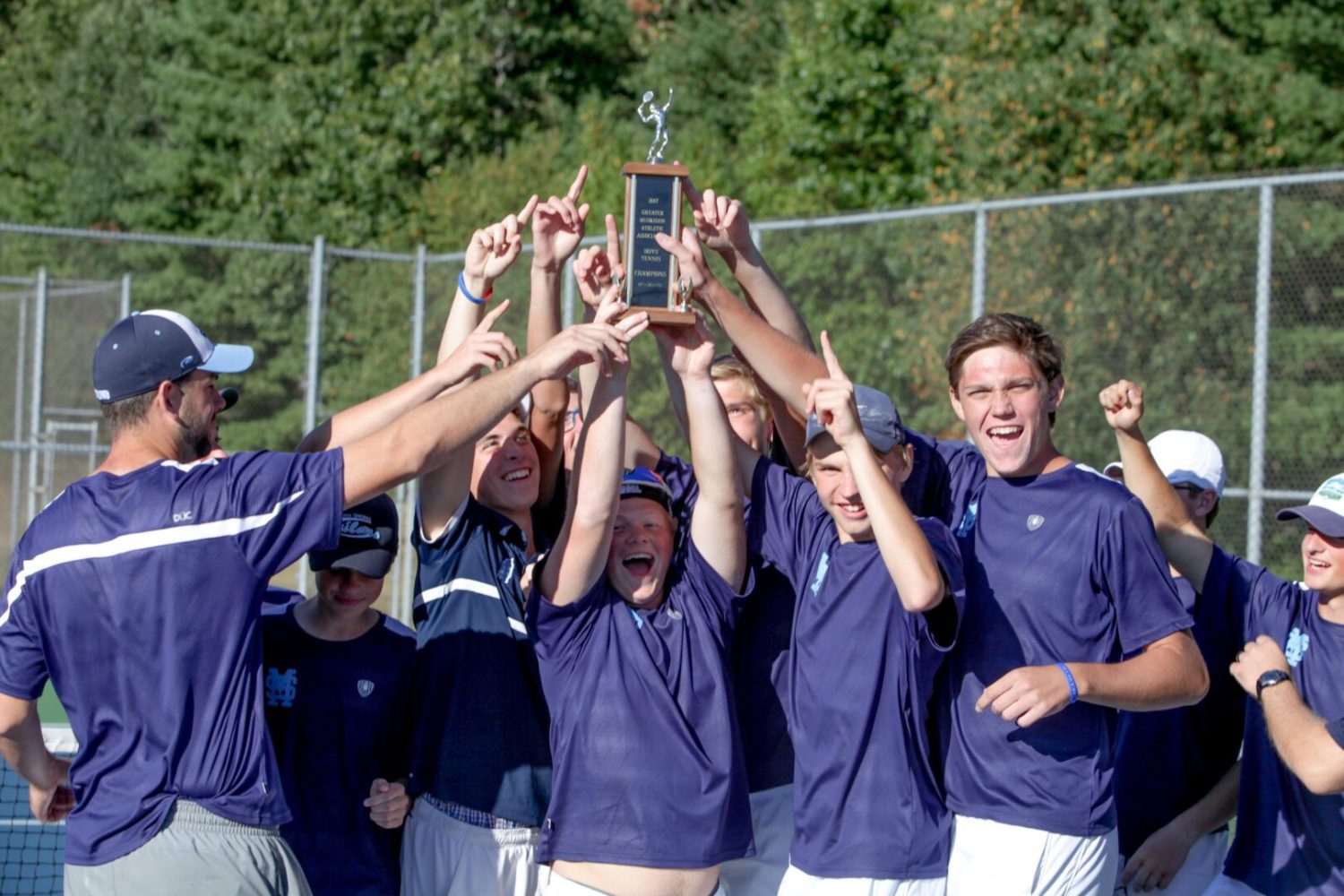 area for several years now, which is obvious every fall at the Greater Muskegon Athletic Association City Tennis Tournament.

The two teams fight it out for the tournament championship every year, and they’ve been taking turns claiming the trophy. 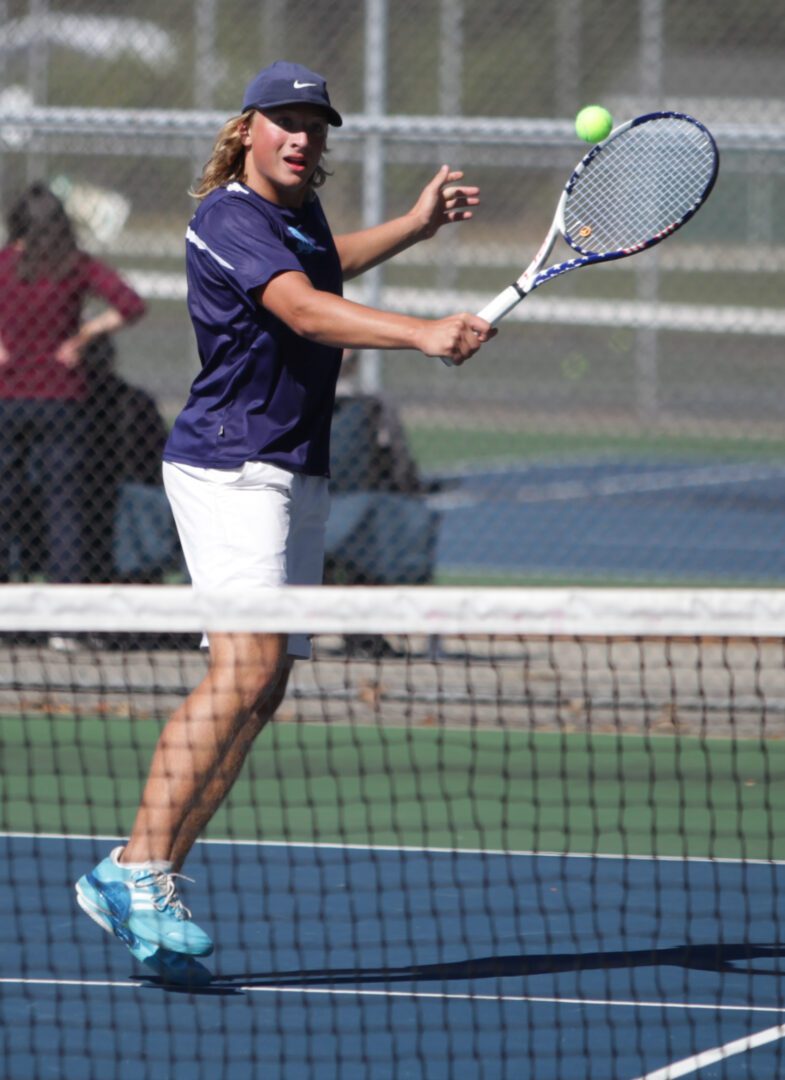 Mona Shores’ Andrew Swirczek works the back hand near the net during the No. 1 singles championship match. Photo/Jason Goorman

In 2015 Mona Shores squeaked past Whitehall by one point in a battle that came down to the final match of the day.

But the competition tightened up again at Saturday’s city tournament at Reeths-Puffer High School. When the dust finally settled, Mona Shores reclaimed the team championship with 43 points, followed closely by Whitehall with 41.

The Sailors earned the championship by having players advance to the finals in seven of the eight flights, and win six of the seven individual title matches.

The top winner of the day for the Sailors was Andrew Swirczek, who captured the championship in the elite No. 1 singles flight.

Also winning championships for the Sailors were Nick Davis (No. 2 singles), Austin Grimm (No. 3 singles), Zach Davis and Thad Krause (No. 1 doubles), Connor Belanger and Tyler Warren (No. 2 doubles) and Grant Hylland and Brady Whalen (No. 4 doubles).

Warren, a senior, became a champion in his first year of playing high school tennis. 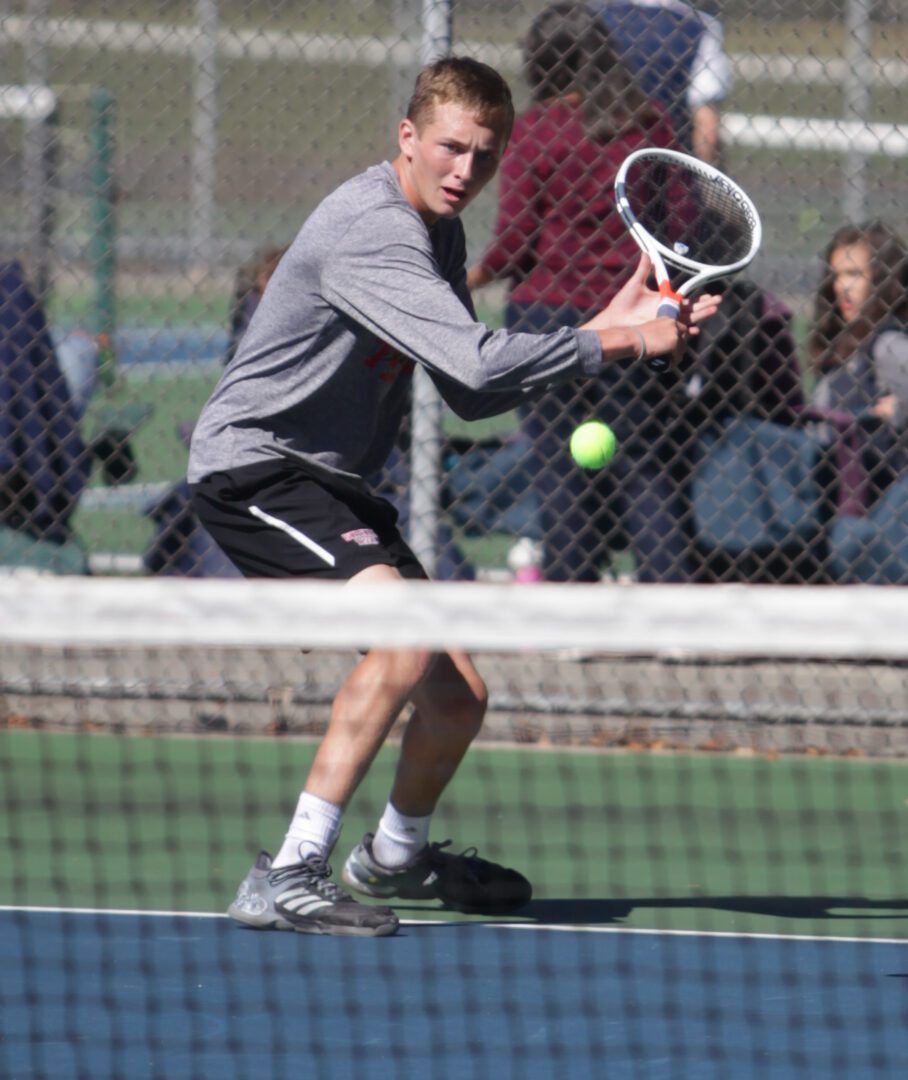 Whitehall’s Spencer Trnka winds up to the shot during the No. 1 singles championship match. Photo/Jason Goorman

“Last year Whitehall won it, they had a really good team, but this year we felt we could get it back,” said Mona Shores Coach Steve Erny. “It’s fun to have a team in our area that we can compete like this with every year.”

Mona Shores, which plays a very challenging schedule against a lot of schools outside the area, is 14-9-2 overall this season in dual matches. But the Sailors are 4-0 in O-K Black Conference play, and will meet Jenison on Monday for the regular-season conference crown.

“That’s kind of our next goal,” Erny said. “But this was also a big goal this year, to get that city title back.”

Swirczek could have easily been playing for his second No. 1 singles title on Saturday.

Last year, as a sophomore, he was eliminated in a tough three-set semifinal match by North Muskegon’s Bobby Tarrant, who went on to win the championship.

Swirczek pushed himself hard to refine his game and improve since then, and the results were undeniable on Saturday.

He easily defeated a very good opponent, Whitehall’s Spencer Trnka, 6-1, 6-0 in the No. 1 singles championship match. 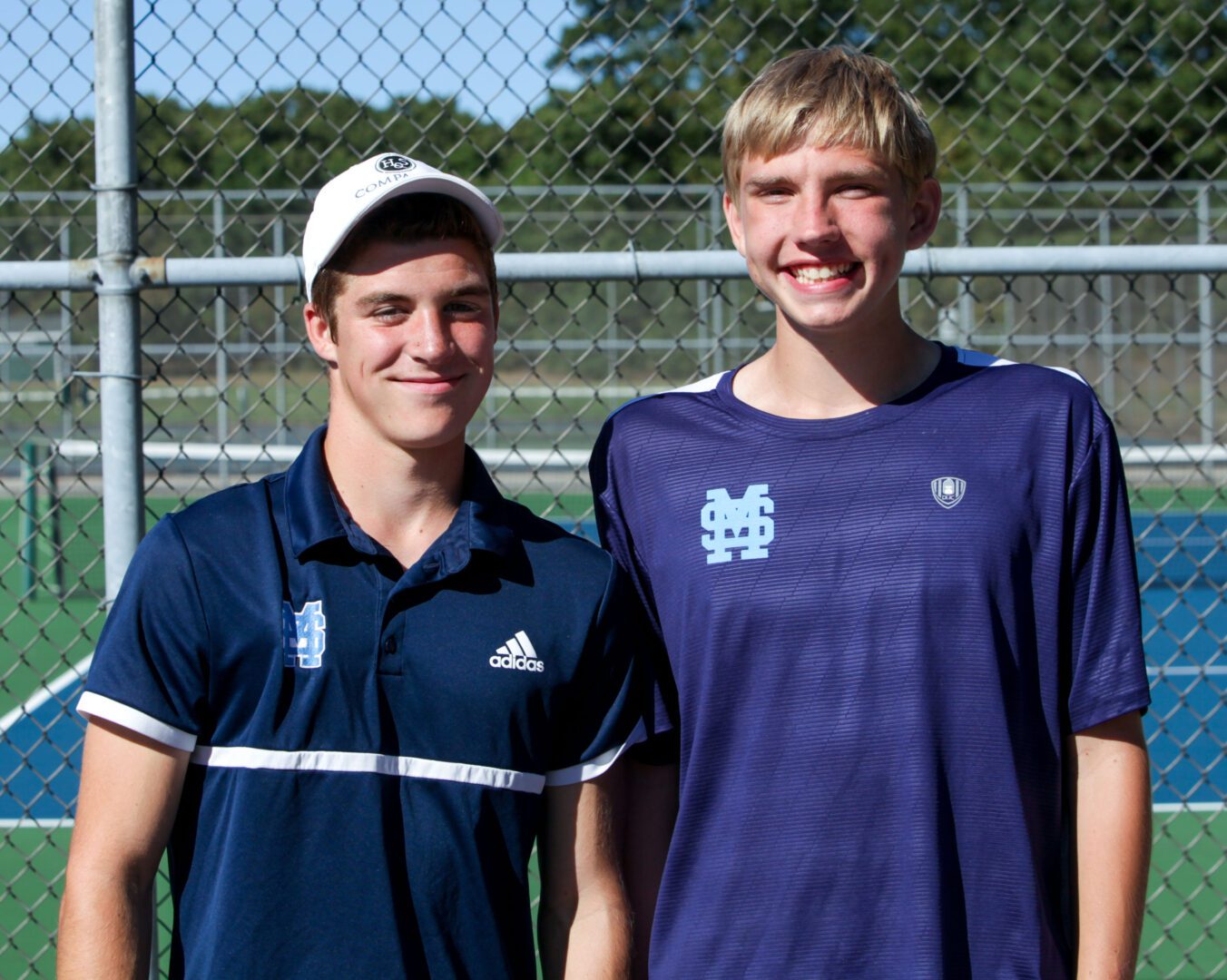 Swirczek won three matches in straight sets on the day, and lost only four games in the process.

“I just put in a lot of time in the offseason – I went down to the Hope Academy and spent a few weeks playing in Florida,” said Swirczek, who won a city championship at No. 4 singles as a freshman. “My forehand was pretty bad last year, so I really tried to step that up, and it feels pretty good right now.

“I felt coming in like I should win it. I felt really good today.”

Some people within hearing distance of the No. 1 singles title match might have assumed that Swirczek was losing. That’s because he kept yelling “Come on!” and “Let’s go” to himself between points, which is typical for high school players who are making a lot of mistakes.

But Swirczek was shouting those phrases after many of his winning shots.

“I was just trying to keep myself in it mentally,” he explained. “Sometimes when you get a big lead, your play can drop.”

Whitehall, which had finalists in seven flights, finished with two individual champions – Ben Ward (No. 4 singles) and Evan Lace and Christian Smolen (No. 3 doubles).

The Vikings had runners-up in five flights – Trnka (No. 1 singles), Jackson VanBergen (No. 2 singles), Ben Stenglein (No. 3 singles), Jack Groessl and Michael Heylmun (No. 1 doubles) and Merrick Schmehil and Brendan Vanderkooi (No. 2 doubles).

Reeths-Puffer’s Chuck Bailey was runner-up at No. 4 singles and North Muskegon’s Charlie Branch and Jared Demint were runners-up at No. 4 doubles. 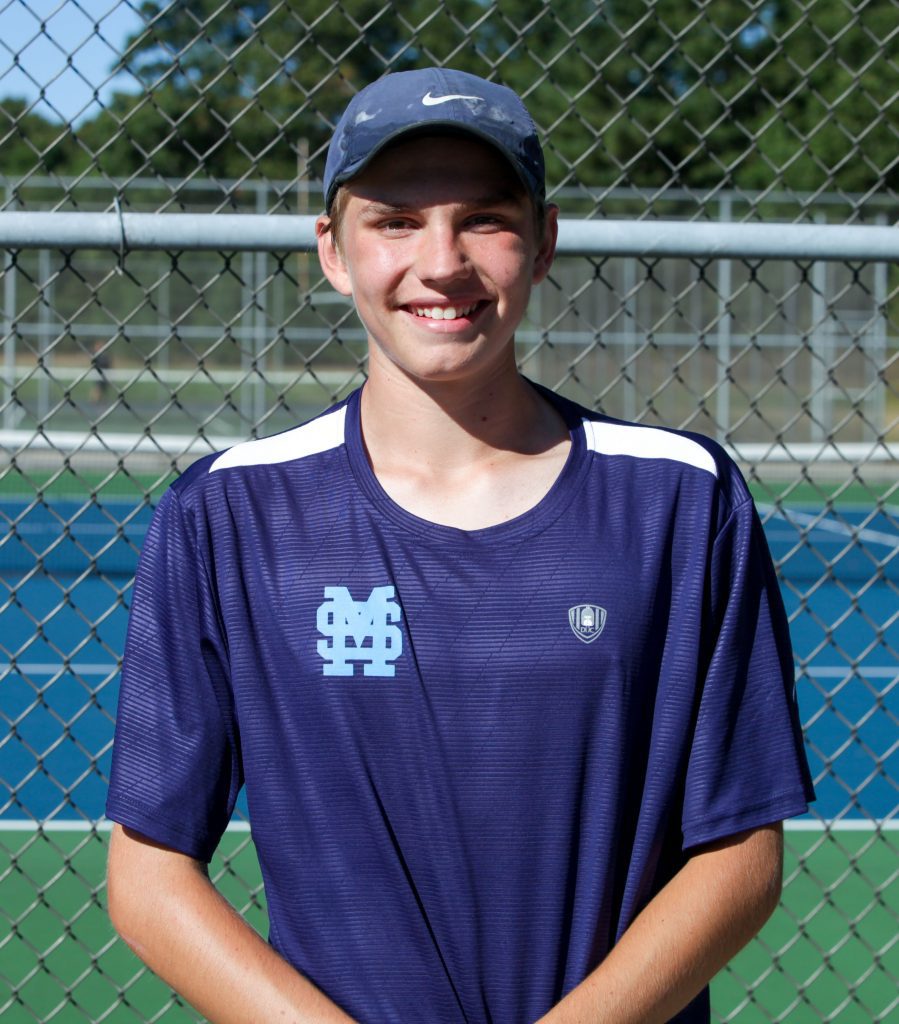 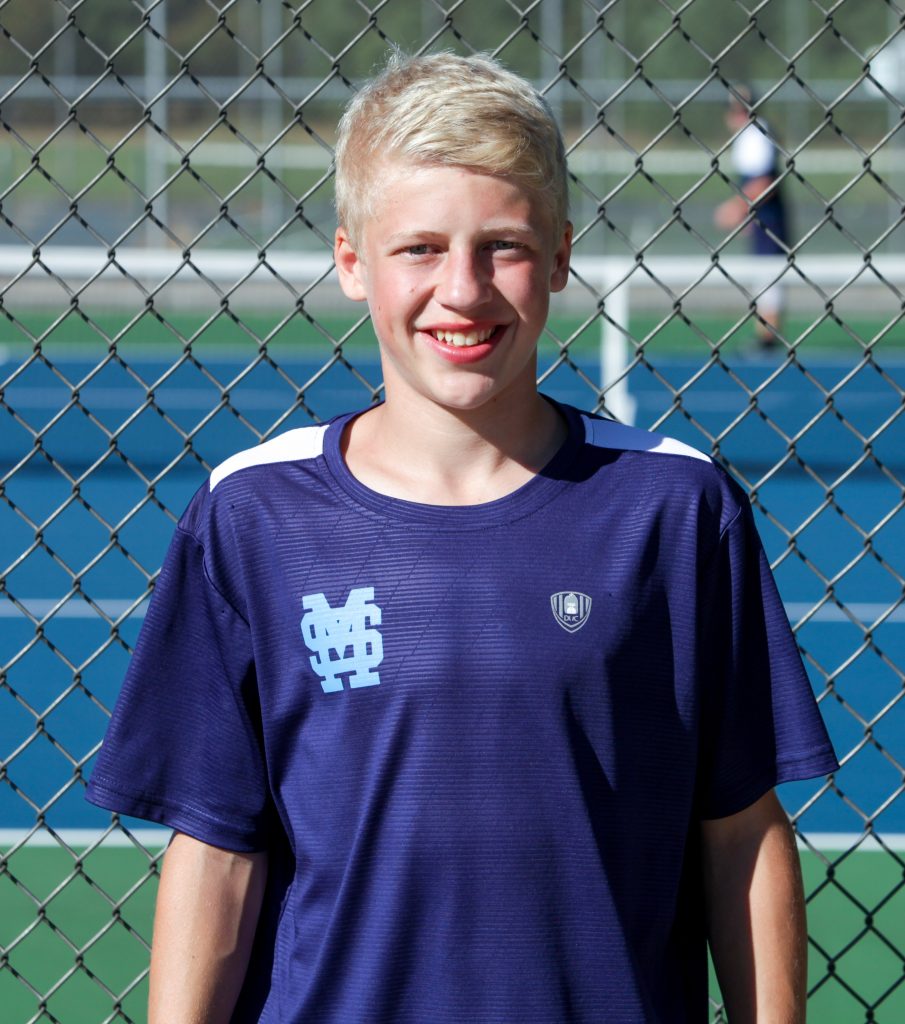 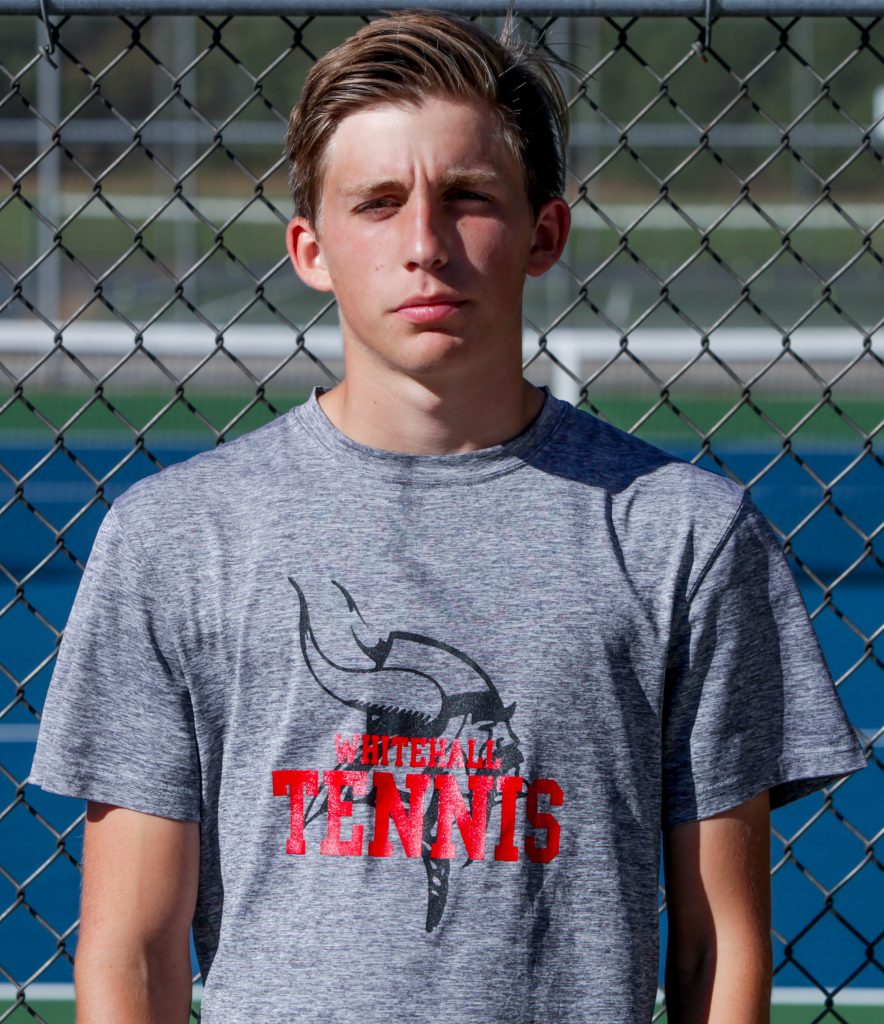 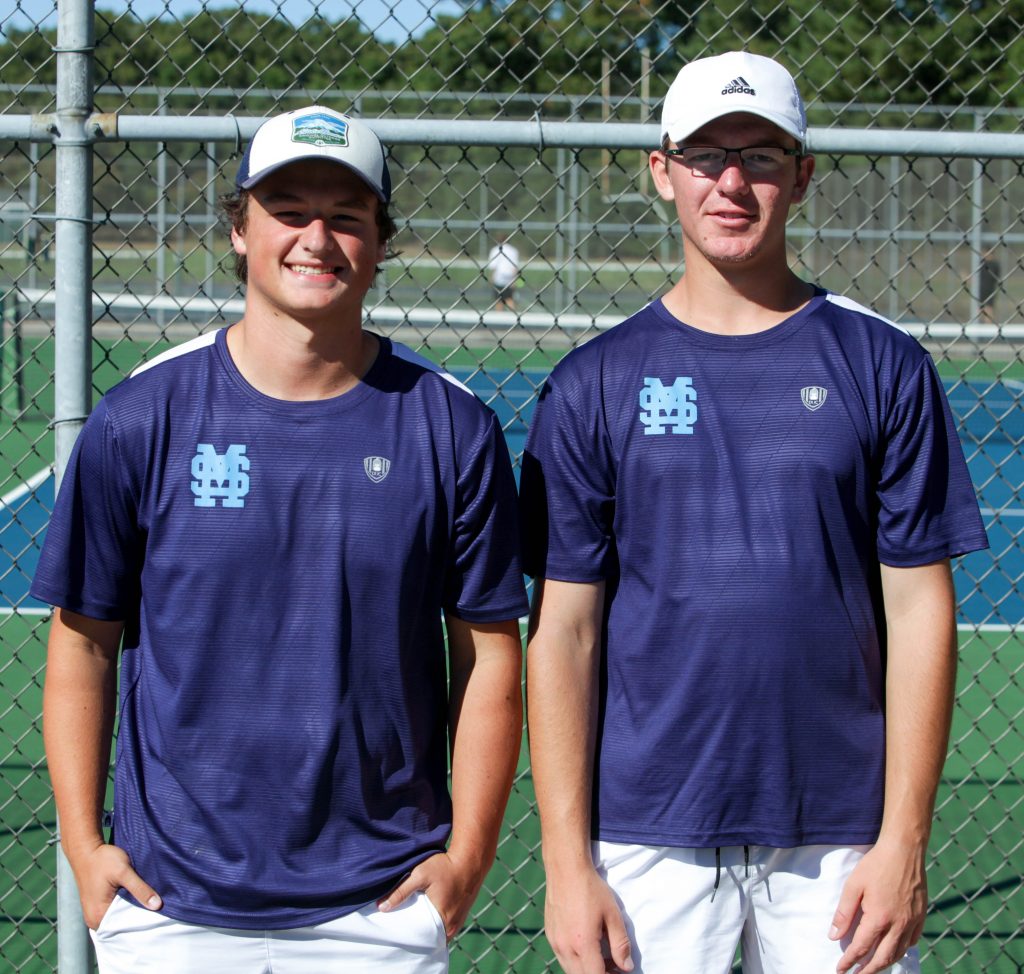 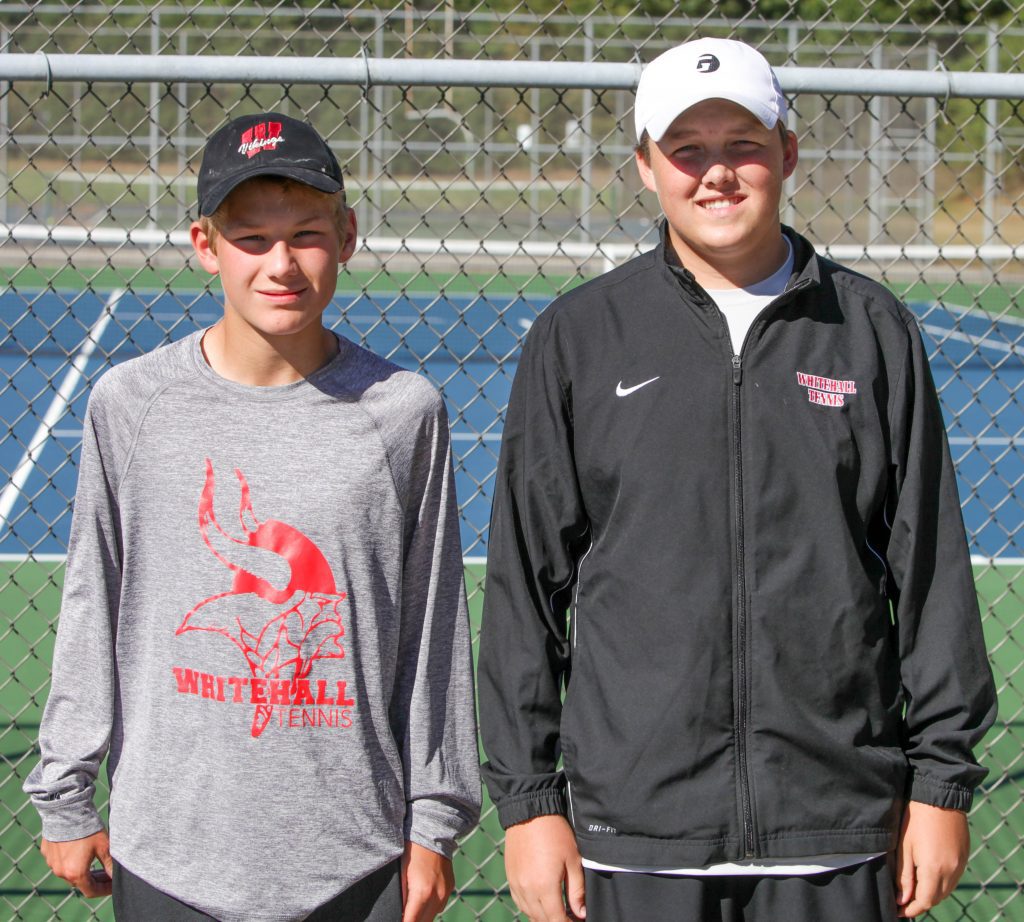 No. 3 doubles champions, Christian Smolen and Even Luce, Whitehall 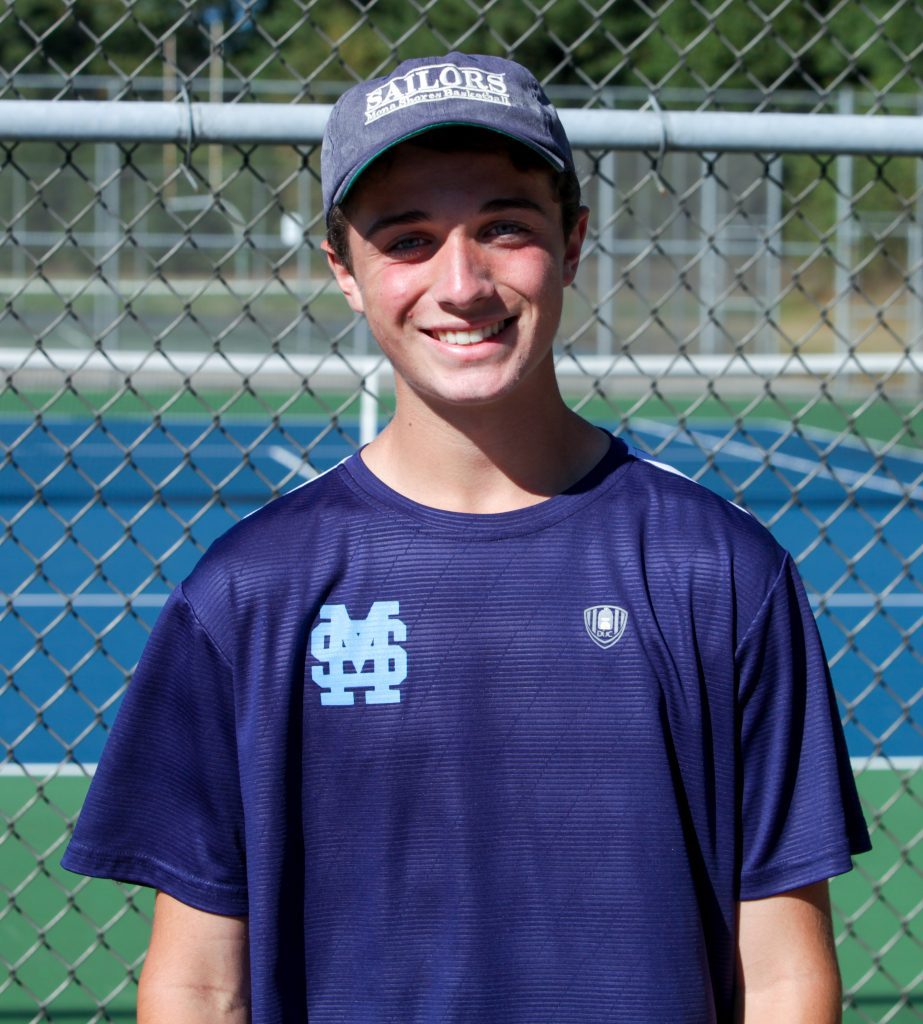 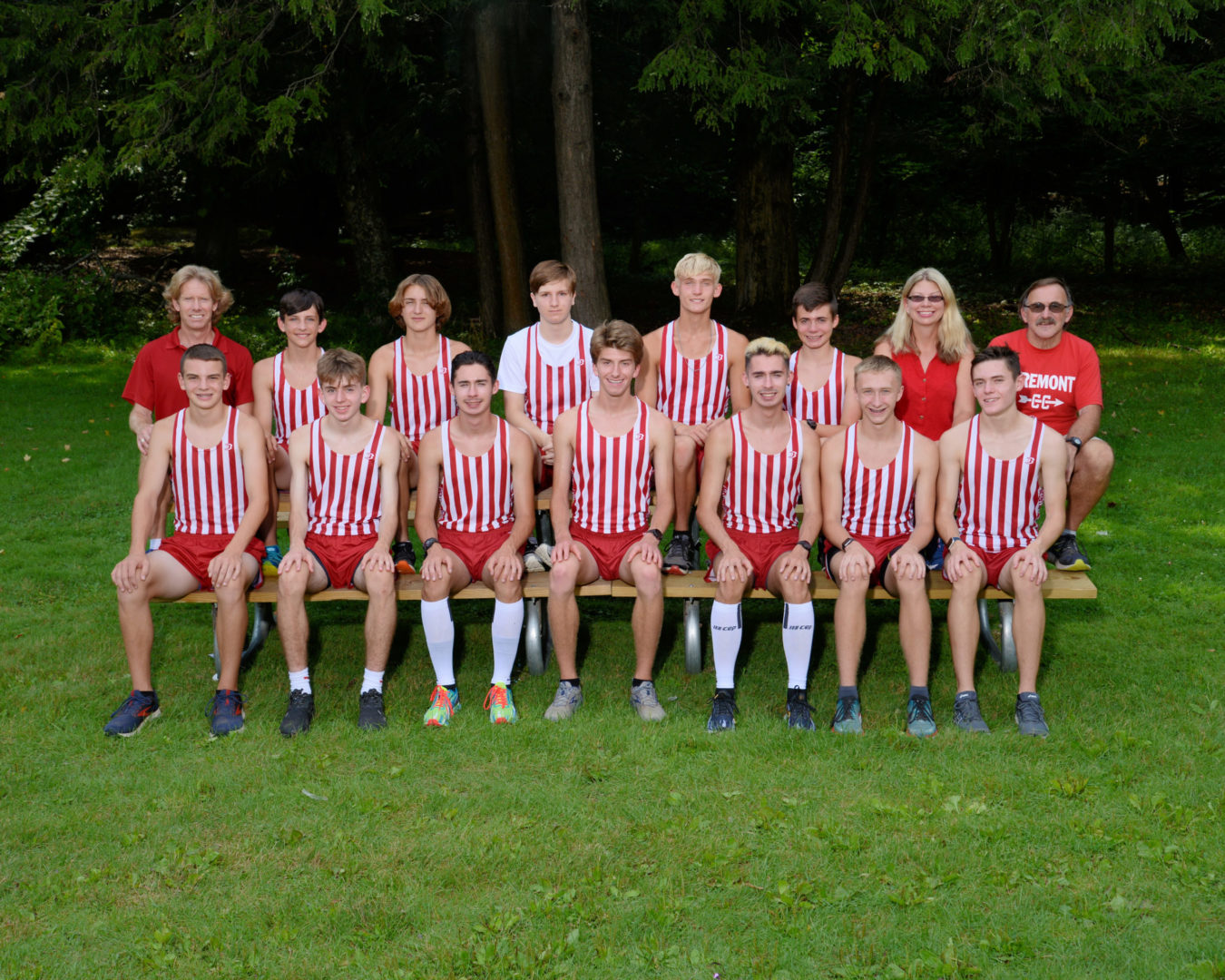 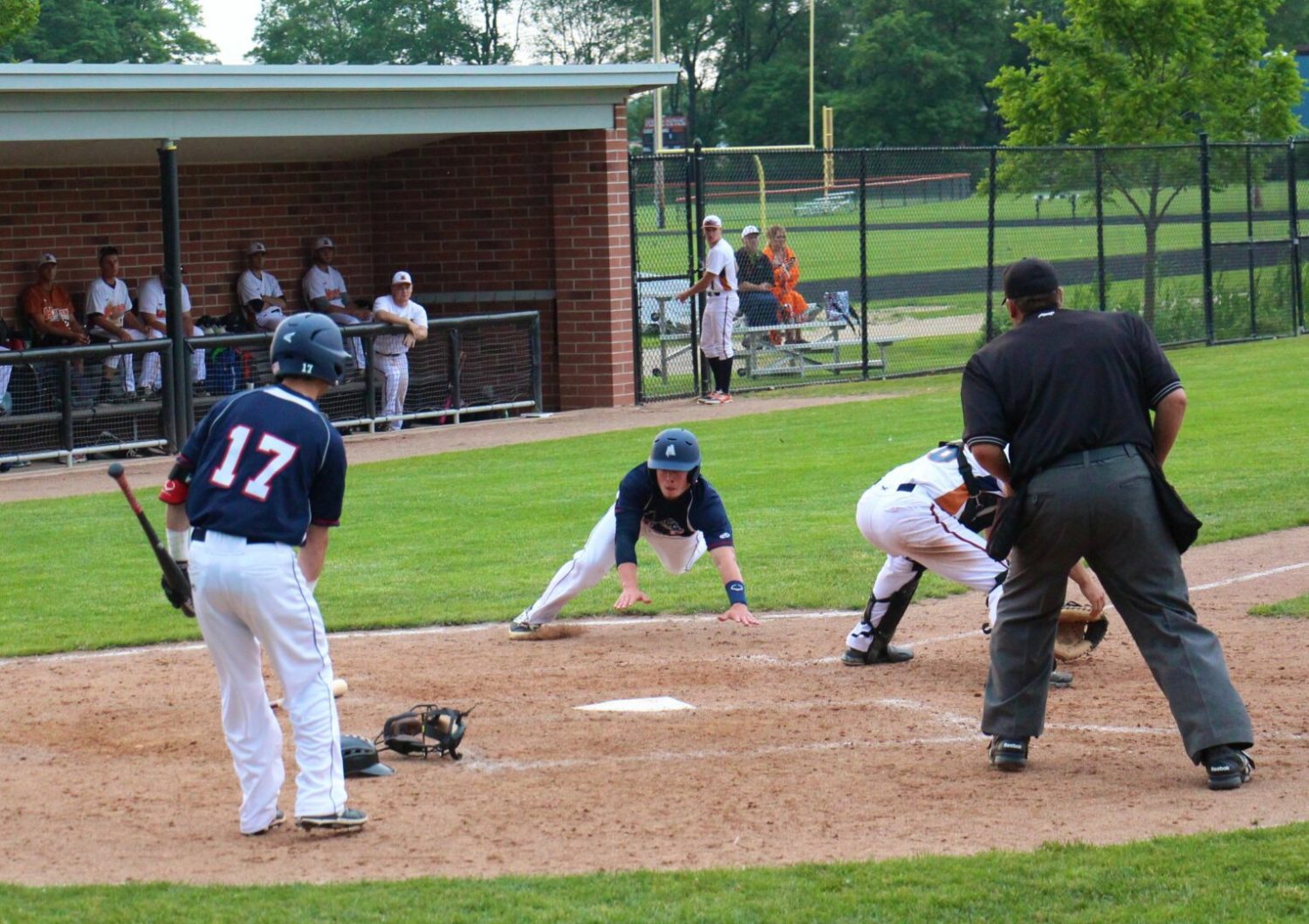