RAVENNA – Ed Bailey has been a successful high school volleyball coach for a long time.

So he was never surprised when he received calls from various schools every year, trying to entice him out of retirement to fill coaching vacancies. 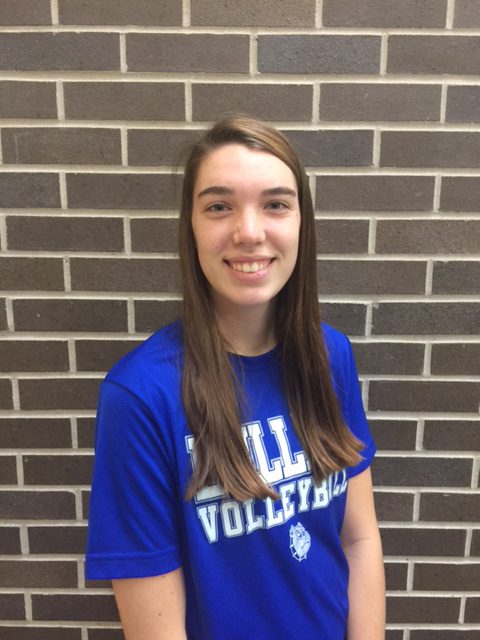 But Bailey passed up on most of the offers. If he was going to coach again, he wanted a team with the potential to play for championships.

That opportunity came along when he was contacted by Ravenna.

So he took the job in the spring, started working with the team, and the results have been impressive so far. Ravenna is currently 11-6-1 overall against some very tough competition, and was recently ranked fifth in the state in Class C.

The Bulldogs seem ready to challenge other strong teams, like perennial power Whitehall and defending co-champions Montague and Shelby, for the West Michigan Conference championship.

Ravenna, which hosts Oakridge on Tuesday, is currently 2-0 in conference play. 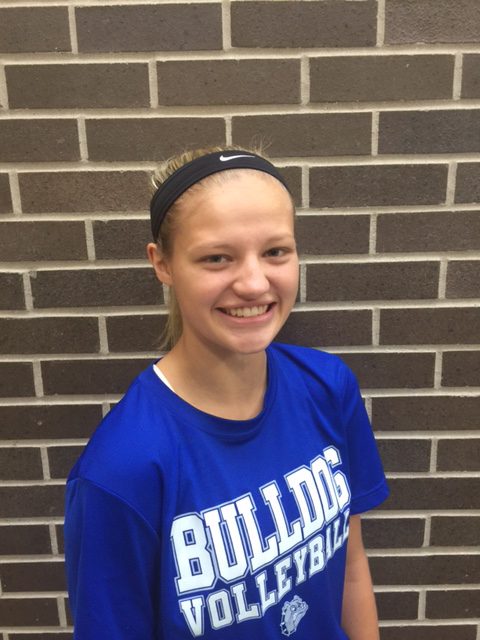 “I’ve been in this business long enough, and I get calls every spring,” said Bailey, who coached a state championship team at Holton High School in 1994, and has also coached at Reeths-Puffer, Western Michigan Christian and Muskegon Community College.

Jacobs, a 5-11 senior, is the player who usually produces the big points for the Bulldogs. She currently has a team-leading 155 kills, and is skilled in other areas of the game, as well. She leads the team in service aces with 30 and blocks with 27.

“She’s tall, athletic and a ball-hound,” Bailey said. “She’s got a lot of power. If you want to be a good team,you have to have somebody who wants the ball and wants to put it away. Amber is that go-to player.”

Jacobs’ power game is just beginning to fully evolve in her senior season. 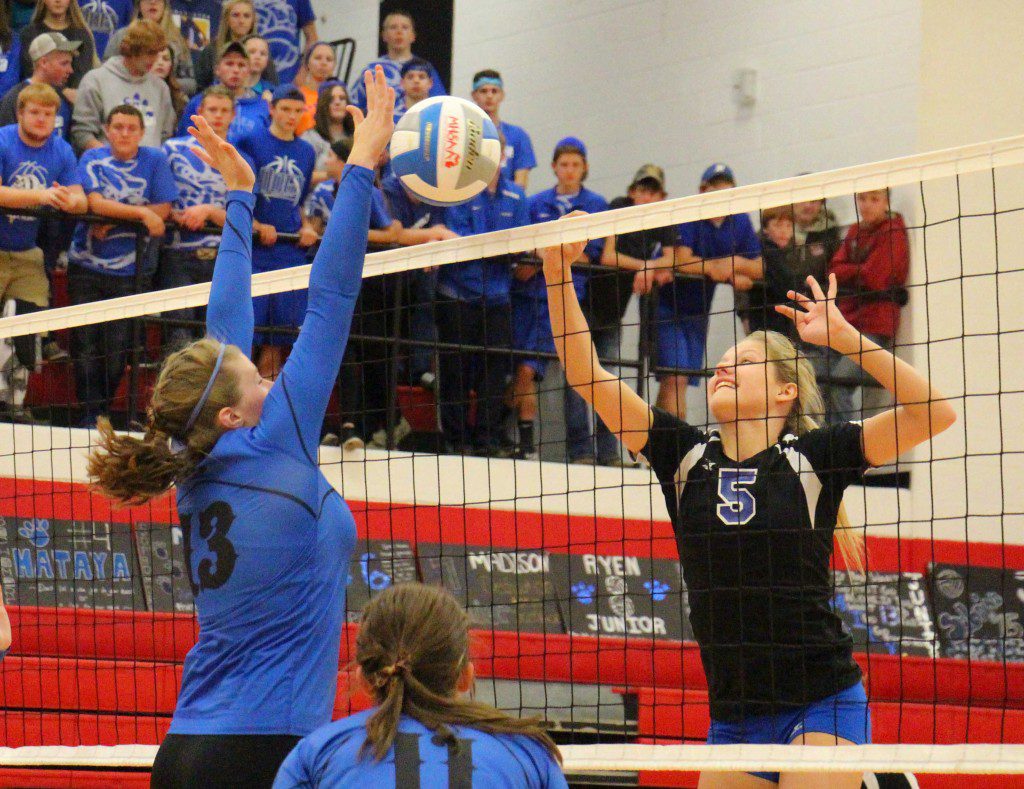 “One thing I noticed about her in the past, she was not a hard hitter, she was a place hitter,” Bailey said. “She was tentative because she was afraid of making errors. Now she’s still placing it, but placing it hard. She’s a very powerful hitter. Does she hit it out of bounds sometimes? Yes, but that’s OK. By the end of the year most of those hits will be in-bounds.”

Jacobs says Bailey’s assessment of her evolving skills is spot on.

“I’m definitely hitting it harder,” said Jacobs, who remains undecided about her college plans. “I’m starting to slow down on the errors. It’s fun getting kills and have the whole team get excited.” 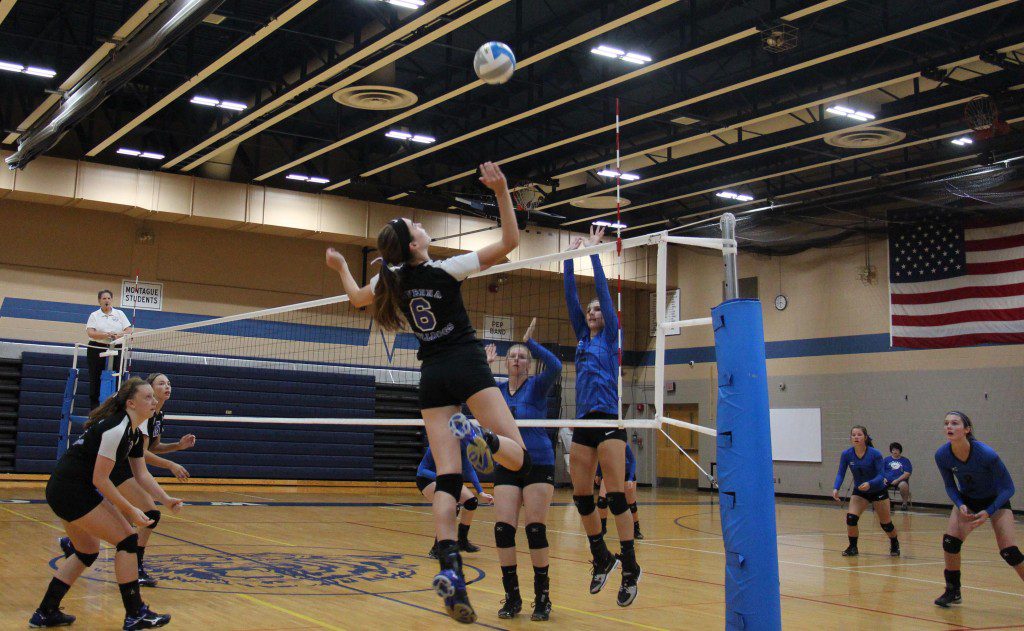 Jacobs gets ready to put down a point for Ravenna in 2016. Photo/Jason Goorman

Jacobs has benefitted from years of practicing and playing with Crowley, an expert setter who knows how and when to get Jacobs the ball to make the big shots.

Crowley, a 5-7 senior, has already piled up 267 assists on the season. She also produces her share of points. Her 52 kills are second on the team to Jacobs.

“She has a very high volleyball IQ,” Bailey said about Crowley. “It takes years of hard work to become a good setter, and I think she has put in the time. She’s skilled all the way round, but she’s an excellent setter.

“We know Amber is our big-play girl and when we need that big point, Megan can get the ball to her. She knows when to feed the ball to Amber, or sometimes to someone else, just to keep the defense honest.”

She admits she’s a student of volleyball, and says it’s helped her game.

“I played club volleyball for the past two years, and I watch volleyball whenever I can,” said Crowley, who plans to continue her volleyball career with the Muskegon Community College squad next season. “I watch college setters and try to pick off stuff from them and learn what to do. The most important thing is to learn how to read the other teams well.”

Both Jacobs and Crowley said they were surprised and pleased by their team’s lofty state ranking early in the season.

“I honestly did not expect it,” Crowley said. “Such a small school being ranked so high, it’s mind-blowing. The six seniors on the team have been playing together since middle school, so the chemistry is good, and we have underclassmen who add a lot to our team, as well.”

Fruitport volleyball team storms all the way back from a two-set deficit, beats Allendale in five