MUSKEGON – Most high school programs are lucky when they have one offensive lineman with the talent, strength and athleticism to play college football at the Division 1 level.

Muskegon High School has two of them – bookend tackles Antwan (A.J.) Reed and

The physically-imposing duo of Reed and Bradford combine to tip the scales at nearly 650 pounds. Together with 289-pound center DeAndre Mills-Ellis and 280-pound guard Marquis Cooper, the Big Reds’ offensive line isn’t lacking in beef, or the ability to manhandle the opposition.

Before the season, Muskegon Coach Shane Fairfield said the line would be a strength for his team, and that has definitely been the case. 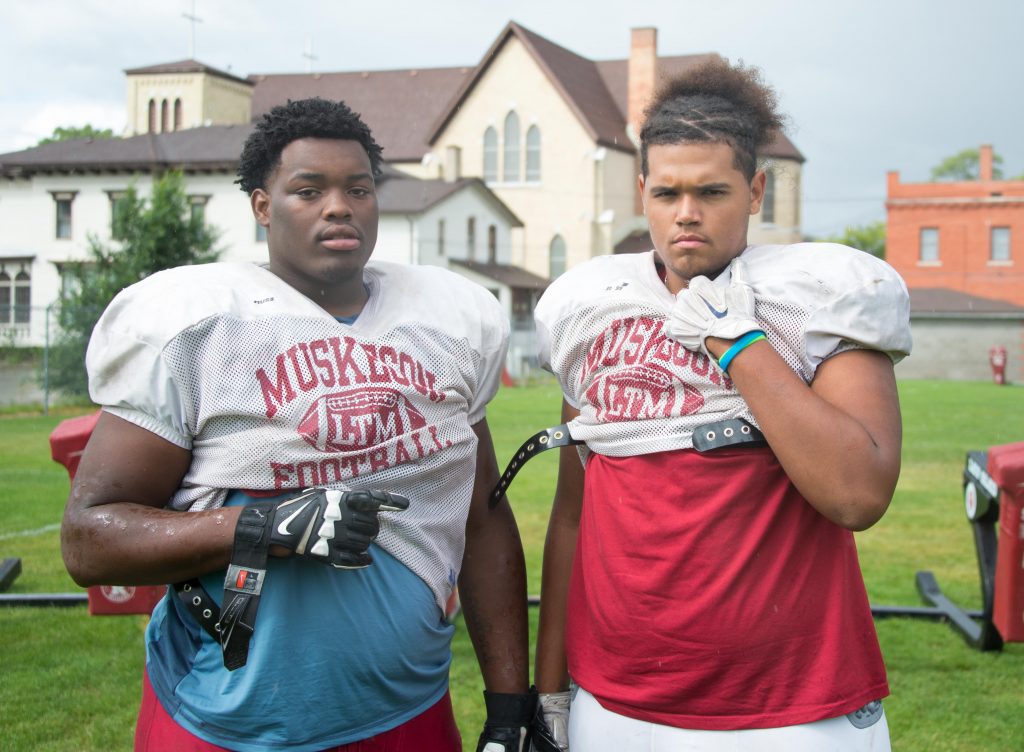 The big guys up front have helped the Big Reds gain over 1,000 yards of total offense during their 2-0 start this season.

Muskegon opened with a 56-0 win over Ann Arbor Pioneer and a 28-7 victory last weekend in Illinois over Lincolnshire Stevenson.

The Big Reds piled up 419 rushing yards against Stevenson on 49 attempts, for an average of 8.5 yards per carry, La’darius Jefferson rushed for 218 yards while running back Davion Mccall had 136.

Ball-carriers don’t gain yards like that without linemen moving defenders out of the way.

Reed, Bradford and their teammates are determined to produce many more wins – including that elusive victory in another state championship game.

Muskegon will open its O-K Black Conference season Friday night at 7 p.m. with a home game against Fruitport.

“On paper, we’ve been told we’ve got the talent to be one of the best teams in Muskegon history,” said Bradford, a junior who stands 6-foot-5 and weighs 320 pounds. “We know we have to put up the results to back that up. But you talk about a confidence builder – we use that.”

Happy back home in Muskegon

It was only during his sophomore season that Reed started understanding how much potential he had in football.

“I started out playing baseball when I was young,” said Reed, a 6-foot-6, 325-pound senior. “I never really played football back then. But I got in trouble one day, and (the punishment) was that I couldn’t play baseball. I didn’t want to sit in the house all day, so I decided to play football. I started out with the Dynamites at the Pee-Wee level. 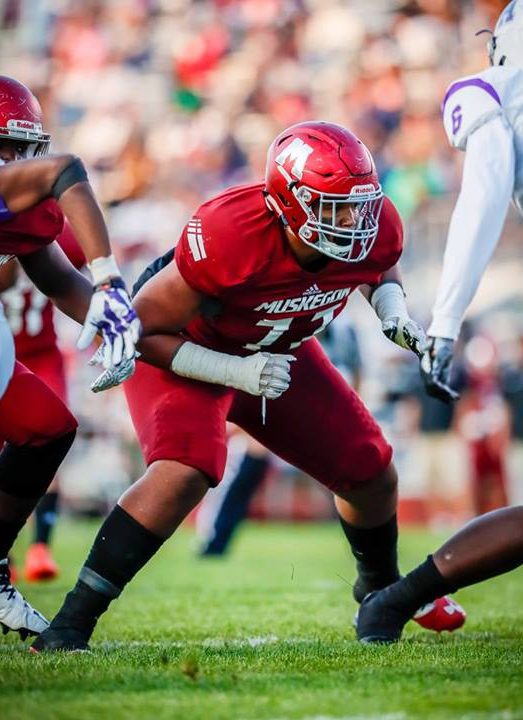 Reed moves into position during a play against Ann Arbor Pioneer. Photo/Tim Reilly

“I was at North Muskegon my freshman year, and when I came to Muskegon, everyone was like, ‘So you play football?’ Everyone was talking about my size. I was probably about 250 pounds then. And the coaches here really pushed me in getting better.

“Then I got my first (scholarship) offer from Tennessee my sophomore year and that really opened my eyes. It motivated me to really work hard, because I realized I could accomplish a lot of things through football.”

He was only a sophomore when he made a verbal commitment to play college football at Penn State, a Big 10 school with a long history of success on the gridiron.

“With Penn State, it felt like I had an instant bond,” Reed said. “I got to know (offensive line) coach (Matt) Limegrover and (head) coach (James) Franklin better than anyone else I met. They made me feel comfortable while I was there. And I’ll have a chance to play for championships.”

Before his junior year, Reed was approached by officials from IMG Academy in Bradenton, Florida, a boarding school with state-of-the-art facilities and a 500-acre campus, set in sunny Florida.

The school is a pipeline for highly-touted college football recruits, so when officials informed Reed and his mother, Kelley Reed, that they could provide a scholarship for him, IMG had their attention.

Reed informed Fairfield in the summer of 2016 that he was leaving Muskegon to attend IMG.

“Being that it was one of the top places to play in the country, I was hyped up about it,” Reed said. “But I think I kind of rushed into it.”

After several weeks of living in residence halls on his own at IMG, Reed realized he had made a mistake leaving Muskegon.

“It wasn’t so much that I was homesick, it was just tough being there on my own,” he said. “I’m having fun when I’m (in Muskegon) because these are the guys I grew up with. When I was down there, I didn’t really know anyone and I didn’t bond with any of the players. It just felt like business – going to school and football. I wasn’t having fun.”

He returned to Muskegon and the Big Reds in late September, after the 2016 season was already underway.

The red carpet wasn’t laid out for Reed’s return to Fairfield’s squad, even though Michigan High School Athletic Association rules allowed him to play right away.

“I had to fight for my spot back,” Reed said. “Nothing is ever handed out in this program.”

His return to the offensive line was a definite boost for the Big Reds, who rolled through the Division 3 state playoffs, but lost the state championship game at Ford Field when Orchard Lake St. Mary’s scored with seconds left on the clock.

Reed said the last-second loss is a driving force for the Big Reds this fall.

“If someone is doing something they’re not supposed to be doing, or not bringing it at practice, we’ll bring it up and say, ‘Hey, we don’t want to let a game like that slip away again,’” Reed said. “We don’t talk about it all the time, because it’s in the past and we want to push forward, but if someone isn’t doing something right, we’ll be like, ‘Hey, do you want to experience that feeling again?’

“We use it as motivation.”

Fairfield has noticed increased maturity in Reed, compared to when he was a 260-pound sophomore who wasn’t sure what he could accomplish in football.

“Some kids who commit to a college early, they feel like that’s it, and that they’ve already proven themselves,” Fairfield said. “A.J. hasn’t been like that. He’s done everything the right way. He’s worked extremely hard in the offseason and he wants to get better.”

A big part of Reed’s development this summer was working side-by-side with Bradford. The pair have developed a bond on and off the field.

“A.J.’s a better pass blocker, while Anthony is a dominant run blocker, so they’ve really tried to learn from one another,” Fairfield said. “They’ve pushed each other.” 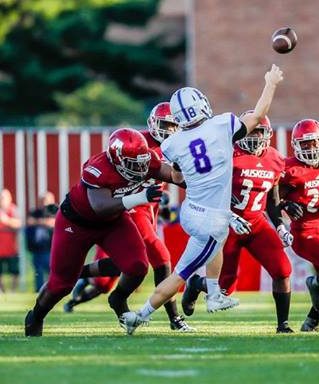 Bradford has picked up where he left off from a dominant sophomore season, which helped him draw recruiting interest from major universities across the country, including Alabama and Georgia.

“Anthony has just been destroying it out there,” Fairfield said of the Big Reds’ opening two games. “He’s got more pancake (blocks) than Mr. B’s. Seriously, though, he’s out there having fun and doing a hell of a job for us.”

“You see him knocking all these guys to the ground and you’re like, ‘Man, I want to do that, too,” Reed said with a laugh.

Fairfield said Bradford’s strength is comparable to some of the past Big Reds greats, including linemen Terrance Taylor and Kenny Finley. He said Bradford can squat up to 550 pounds, and has a max bench of nearly 400.

“I’ve always been a big boy,” said Bradford, who started playing football at age 11 with the youth team Lakeshore Lions. “I’m used to it.”

Bradford has gained some tips on pass blocking from Reed, as well as advice on dealing with the madness of recruiting, which will surely amp up when he begins to take campus visits next summer.

“He told me don’t get too into it,” Bradford said. “Don’t get to caught up with what a school shows you. He told me to just find a place that makes you feel comfortable. Where it feels like home.”

Bradford said he’s been hearing a lot from Alabama, Georgia and Ohio State, and has also heard that coaches from the University of Michigan have started to ask Fairfield about him.

“I’m going to try to take some visits and get to know the coaches more,” Bradford said.