Association state football playoffs 13 years in a row, and 22 out of the past

“It takes dedication from all of the guys,” the 6-foot-2, 210-pound junior said. “I can remember the day that school was done for the summer last year. We had a half day for exams, and after those were done, we were out on the field doing drills. It started, right then and there, with voluntary work.

“Being a younger player in the program, you’re always trying to push yourself to get better. You want to build on what the last team accomplished, so you’ve got to keep working.” 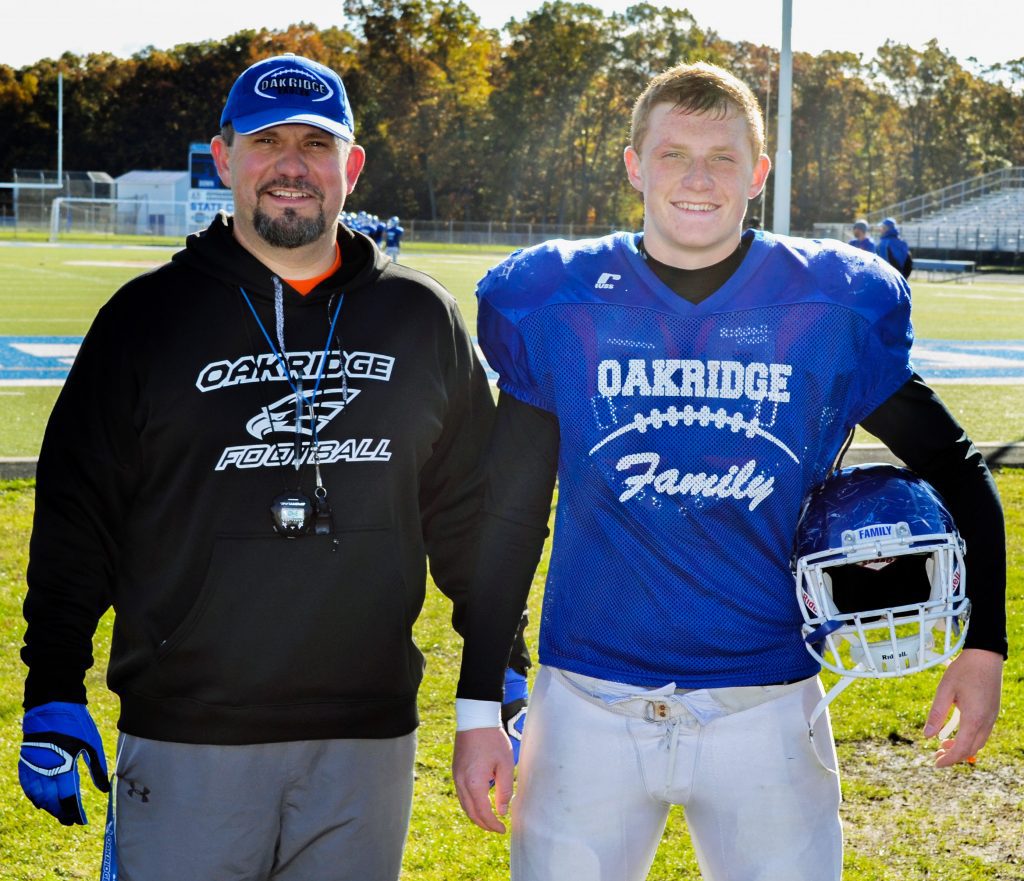 The sort of dedication from Oakridge players has paid off for years. Since their 2005 Division 5 state championship under legendary coach Jack Schugars, the Eagles have qualified for the playoffs every year.

That run included another state championship in 2008, and a semifinal appearance in 2013. Other years the Eagles didn’t advance as far in the playoffs, but they always got the required six victories to qualify for the postseason.

It’s the second-longest playoff streak in the Muskegon area, behind only the Muskegon Big Reds, who have made the playoffs 18 straight seasons.

The Eagles, 7-2 this year, will make their 13th-straight playoff appearance on Friday at home against West Michigan Conference foe North Muskegon. The longtime rivals faced each other in Week 2, when the Eagles rolled, 42-14.

Eagles head coach Cary Harger – Cole’s father – has been a part of the success since he was a teen. 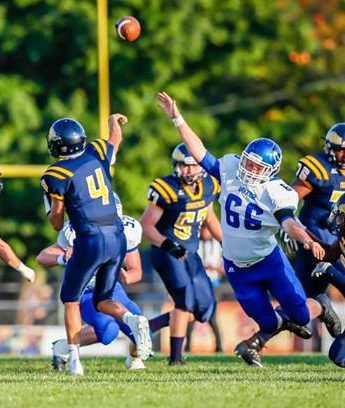 Oakridge lineman Cole Harger gets a hand in the face of North Muskegon’s Mack Young during the Eagles’ win over the Norse in Week 2. Photo/Tim Reilly

He played on the Oakridge squad that qualified for the playoffs for only the second time in school history. That was in 1989, when the undefeated Eagles were upset at home by Saginaw Michigan Lutheran Seminary, 20-14, in the first round of the playoffs.

After graduating from Hope College, Harger returned to the school as a teacher and assistant coach in 1996, then became head coach in 2011 when Schugars retired.

Suddenly he was in charge of carrying on the legacy he helped to create during his playing days. He’s not alone in that respect. Three of his assistant coaches – Tim Parker, Dave Randall and Jake Huck – as well as several JV and middle school coaches, are also former Eagles who helped build the program into an annual winner.

“It’s something my staff and I take great pride in,” Harger said. “We can address the players and tell them that we know what it takes, because we’ve been on that end as former players.

“We have an expectation of (at least getting to the playoffs),year in and year out, but it’s never going to be just handed to us.”

The winning has been even more fun for Coach Harger since last season, when his son was a sophomore who was called up to varsity early in the season.

“I was always really looking forward to him playing,” the coach said about Cole. “I never pushed it on him. But by the time he was eight or so, Coach Schugars allowed him on the sidelines to be a waterboy, then he got into middle school football and found a love for it.” 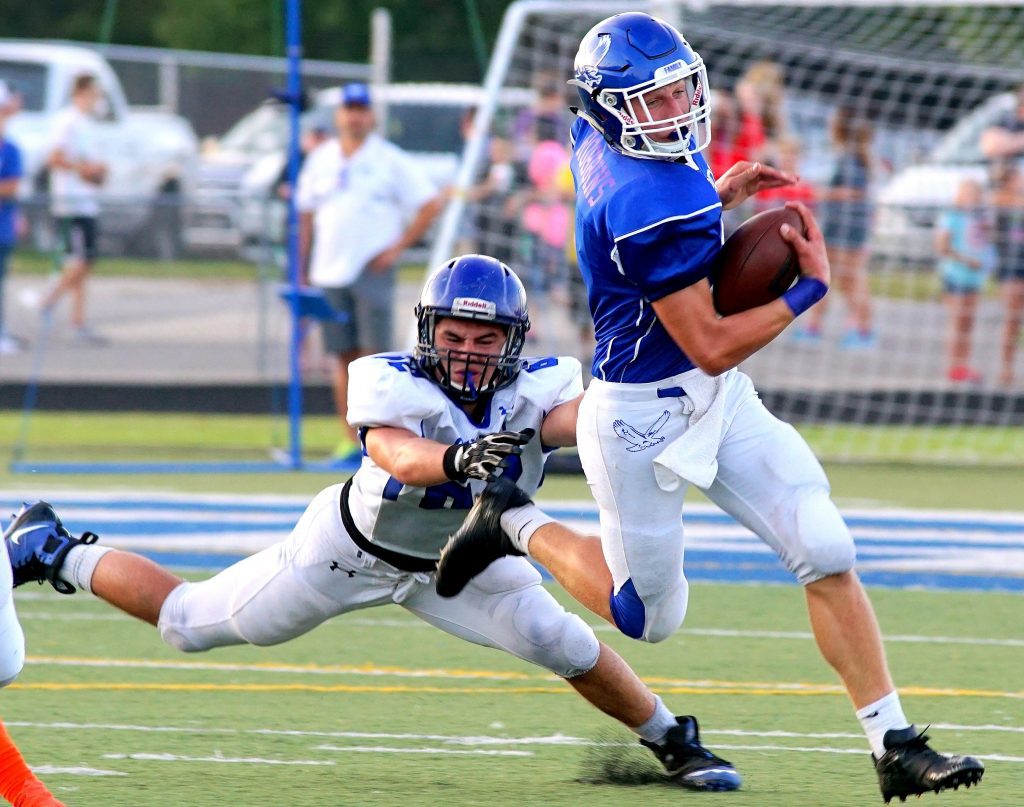 Cole Harger said he and his teammates have accepted the challenge of maintaining the tradition that his dad and the other coaches helped build.

“With the tradition here, we’re expected to do it, but we also want to prove we can do it,” he said. “And we see the young guys looking up to us, and we want to set that winning example for them, too.”

Coach Harger has watched the game, and the amount of work it takes to maintain an elite program, change dramatically over the years.

“The first year we made it was in 1985, and there was nothing really organized as far as weight training or off-season work,” Coach Harger recalled. “It was all just kind of voluntary.

“Some guys would just do some lifting on their own. But making the playoffs opened everyone’s eyes. That was a sign of what it took to get there. To be successful, you needed to do extra work.”

The type of training that Schugars introduced at Oakridge in the late 80s has expanded to detailed work throughout the year, including summer lifting sessions, 7-on-7 passing and team camps, and individual skill and assessment camps.

It’s not like the old days, when high school football was something the coaches and athletes did in the fall. You prepare year-round or get left behind.

At smaller high schools like Oakridge, which has an enrollment of just under 600 students, identifying and developing future talent is pivotal.

For the Eagles, that starts with the volunteer-driven Oakridge Youth Football Football Club, which develops kids’ passion for the sport. That passion is nurtured by a community that loves  its high school football team.

“We feel we’re a great representative of the community, and football is a very big part of the community,” Coach Harger said. “It’s something that people really look forward to. Sure, there may be some pressure on the kids to not let everyone down, but it’s more about doing as well as the teams before them.”

WMC boys hoops round up: Whitehall holds on to stay unbeaten in WMC play