Anthony and Wallace: Two of many talented kids who make the Sailors, Big Reds click

NORTON SHORES – The Muskegon and Mona Shores football teams get a lot of attention, because they’re both

undefeated and two of the best teams in the state.

But when people mention the Big Reds or Sailors, they generally talk about the offensive stars, like Muskegon quarterback La’darius Jefferson or his Mona Shores counterpart Tristan Robbins.

Rarely do they mention the many guys who do the crucial dirty work for each team, like Muskegon’s standout linebacker Ali’vonta Wallace and Mona Shores’ two-way ironman Chuckie Anthony.

Both will play important roles on Friday when the Big Reds, ranked No. 1 in the state in Division 3, will visit the Sailors, ranked No. 2 in Division 2, in an O-K Black Conference showdown that will be closely monitored throughout Michigan.

“We’re really excited,” said Anthony, a senior who’s in his third year of varsity football at Mona Shores. “It’s a cross-town rivalry game, and with the atmosphere and everything, it’s going to be a big game.

“I think it will be big from a bragging and conference point of view, and for the bigger picture. They have a great program, and are most likely going to the state finals this year, so playoff-wise, it would give us a lot of confidence if we can beat them.”

Wallac, a junior in his second year of varsity, said the Big Reds are taking a more businesslike approach to the showdown.

“We know it’s a big game, but honestly, as a defense, we just try to focus on shutting down any team that we face,” he said. “It doesn’t matter who it is.

“We heard there’s going to be 50 different (media outlets) on our sidelines, so we know it’s a big game. And Mona Shores is a good team. But Coach Fairfield just wants to keep things as normal as possible, so we’re not trying to get too excited about it.”

Wallace, a linebacker, plays a huge role on an extremely stingy Muskegon defense, which has only given up 21 points in seven games, and has five shutouts this season. 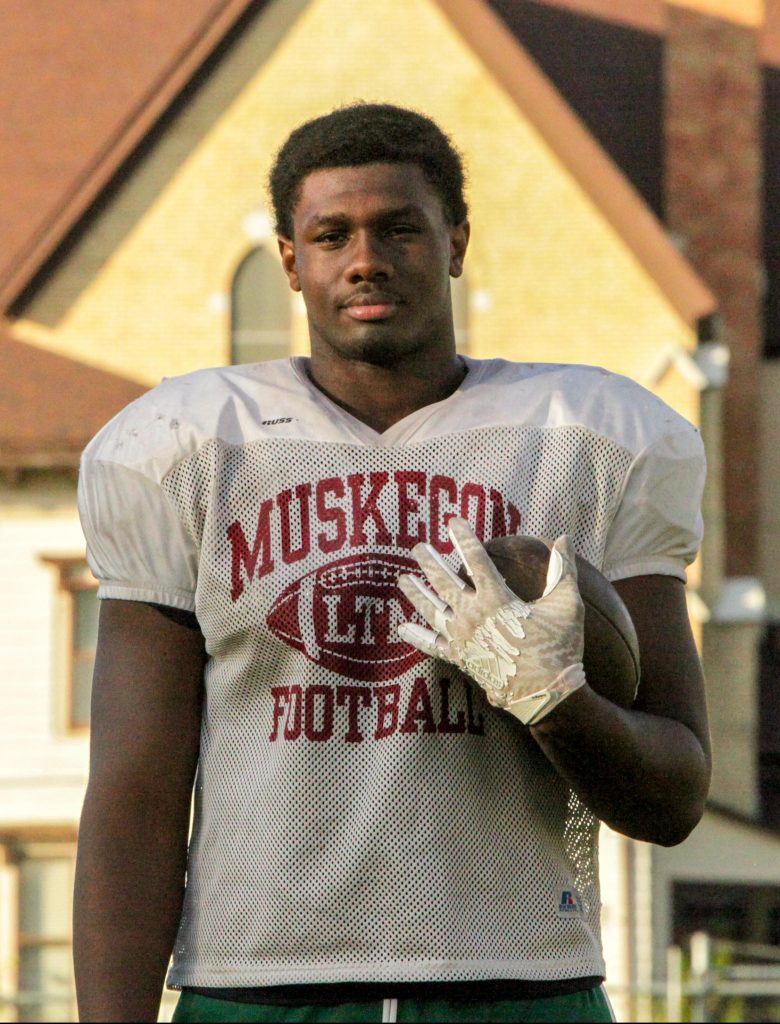 He leads the team with 45 tackles, and also has seven solo tackles for losses, three sacks and an interception return for a touchdown.

“He’s able to do so much out on the field because he’s so elusive,” Fairfield said. “He’s always making good reads and he’s fundamentally sound.

“He’s going to have a lot of Division 1 interest coming,” the coach added. “He’s already got offers from CMU and Toledo, but then there’s schools like Ohio State and Alabama who are starting to show interest. They like him because he has such a huge wing span, but he’s extremely athletic and can run.”

Aside from his talent, Fairfield is also a fan of how Wallace carries himself.

“He’s an amazing student, a big school guy and really a quiet kid,” Fairfield said. “He’s not the loud or obnoxious type. He’s not going to stick his chest out and showboat after a touchdown. I mean this in the best way possible, but he doesn’t act like a guy normally does in his position. Just seeing him walk around, you’d have no idea that he’s got Division 1 offers. He’s a slick cat.”

Wallace said he learned a great deal from Andrew Ward, who starred at middle linebacker last year for the Big Reds, and is now playing at the University of Nebraska. 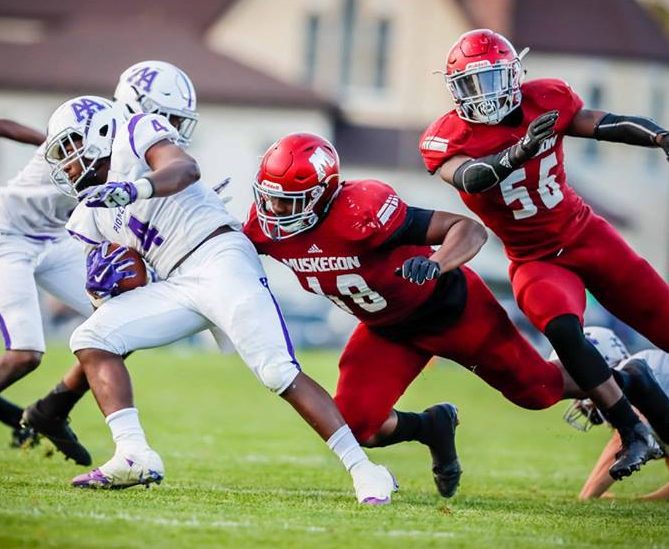 “He was a great leader, so I always tried to do the same things he was doing,” Wallace said about Ward. “If he stayed late at practice to do extra work, then I was right there with him. I knew learning from him, he’d help me in the future.”

Wallace gives a lot of credit to his teammates. He calls the Big Reds’ secondary, led by cornerback Willie Shanks and safety CJ Jefferson, the best in the state. He says the efforts of 300-pound tackle Eli Jackson and defensive end Paul Riley keep him free of blockers, so he can get an easier path to the ball carrier.

With everyone performing their tasks so well, Wallace believes the Big Reds are on a path to avenge last season’s loss in the closing seconds in the Division 2 state championship to Orchard Lake St. Mary’s.

“That’s why our motto this year is LTM, Little Things Matter,” he said. “Every little step along the way matters to get where we want to go.”

The big guy on both sides of the ball

While Wallace is flying around from his linebacker position, Anthony is in the trenches for Mona Shores, manning the nose tackle position on defense, and doing double-duty as the starting center on offense. 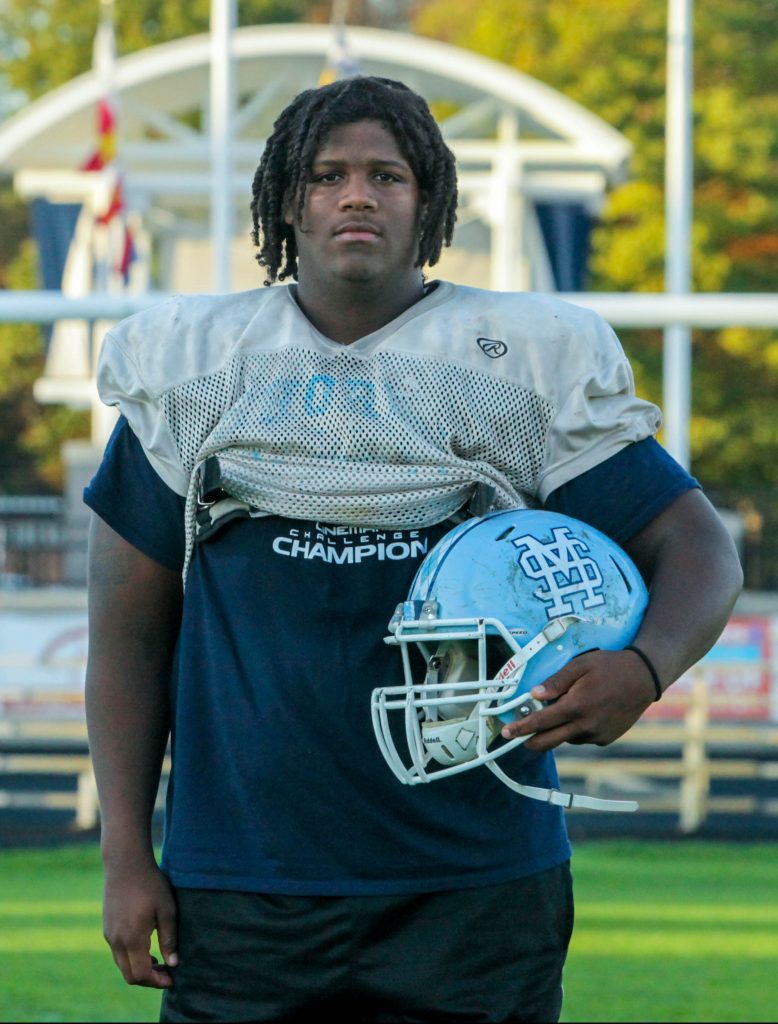 Unlike many of his teammates, Anthony knows what it’s like to beat Muskegon. He was a sophomore on the 2015 squad that beat the Big Reds 21-18 in the regular season, before falling in a playoff rematch.

“Any team can be beaten in the game of football,” said Anthony, a mammoth 6-1, 295 pound athlete.

Anthony saw sporadic playing time as a sophomore, but has started every game as a junior and senior, on both sides of the ball.

That takes a lot of hard work and grit, particularly while playing against the very tough and talented teams that Mona Shores has on its schedule.

“In Class A football, to play both ways on the line, that’s tough, particularly in the heat of games in late August and early September,” said Mona Shores Coach Matt Koziak. “Chuckie’s been lights out, our anchor in the middle. He’s going to play college football somewhere. He’s also the sweetest kid ever. He has a high grade point average, and he lights up a room whenever he walks in.”

“We have a great strength and conditioning coach,” Anthony said, when asked how he has the energy to take the constant pounding on both sides of the line. “He runs us hard, and we go hard in practice and in the weight room. It’s really all about conditioning.” 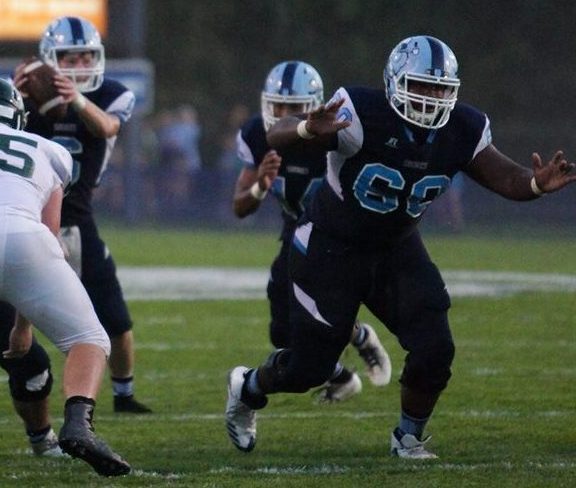 Anthony gets a lot of extra conditioning by playing rugby for a Grand Haven club team in the offseason. Rugby is a lot like football, but it’s more brutal with less padding, and fewer pauses in the action.

“All the pushing and tackling and physicality is great conditioning,” Anthony said. “It’s non-stop for 30 minutes, then the halftime really isn’t a halftime. You go talk to the coach for a few minutes, then you’re right back out there.”

Anthony enjoys being part of Mona Shores’ high-flying offense, which has amassed 312 points in seven games.

But he also gets a kick out of playing a big role on the Sailor defense, which has only allowed 86 points in seven games, and only 18 in the last four games combined.

The Mona Shores defense is loaded with talent, including other two-way stars like D’Anthony Davis and Sincere Dent at linebacker and KeSean Sandifer at cornerback.

“Our defense has heart,” Anthony said. “We’ve had some injuries, and other people have had to step in and they’ve played really well. We play with passion. Our energy level is always high. The offense sometimes leaves us in shaky positions, but we know we can overcome anything.”

Oakridge comes up short against Coopersville in Class B district semifinals