NORTON SHORES – The Fruitport volleyball team has won a city championship in recent years – 2015, to be exact,

when the Trojans defeated Whitehall in the tournament finals.

But Fruitport has struggled against Mona Shores in the city meet, losing to the Sailors in the finals in 2014 and 2016.

That slump ended on Saturday, when the Trojans bested the Sailors in three straight hard-fought sets to win the championship match in the 2017 Greater Muskegon Athletic Association City Volleyball Tournament.

To make it even sweeter, Fruitport downed Mona Shores on its home court. The Trojans have now faced the Sailors four times this season, and have won all four matches. 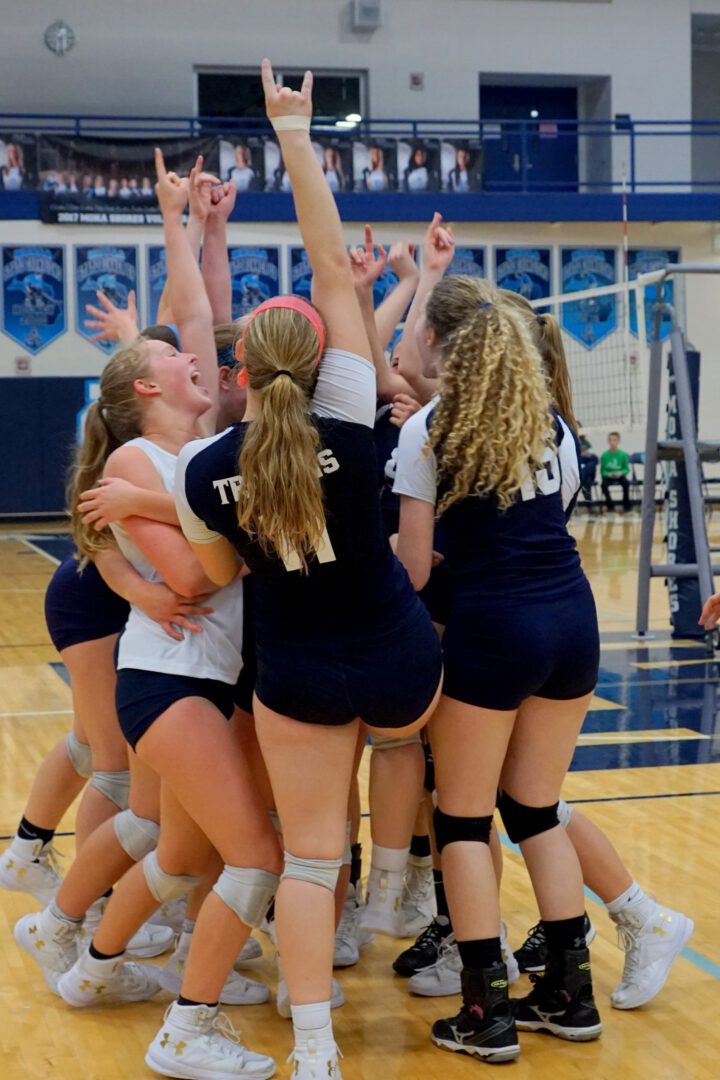 “We love having that trophy,” said Fruitport Coach Nicole Bayle, whose young team features six juniors and only one senior. “Now that we’re part of the (O-K Black) conference with Mona Shores, we see them a little bit more than we used to. They’re a good team with good athletes and always make me a little bit nervous.”

“We started out our day rough, playing very undisciplined, but then we moved away from struggling and were able to put some things together and win a city championship,” said Bayle, whose team is 25-11-2 on the season, and is 5-1 and tied for first place with Jenison in the O-K Black Conference.

While the Trojans swept Mona Shores in all three sets in the finals, the match was extremely tight from start to finish.

The first set was tied eight different times, before Fruitport pulled away at the end and won 25-18.

The second set was tied 10 different times, then the Trojans rallied to win the final three points and steal the win 25-23.

The third and final set was also tied 10 different times, before Fruitport again pulled out a 25-23 win to clinch the match and the championship.

The Trojans showed balance and depth, with different players stepping up in each of the three sets to help pull out the victory.

Kylie Oberlin had a big first set with five kills and three blocks.

In the second set, Jordyn Carlisle kept the Trojans nose-to-nose with Shores with four kills, then Rachel Paulsen excelled at the end, nailing two straight kills to help the Trojans overcome a 23-22 deficit. She then hit a soft shot that fell in to seal the victory for Fruitport.

In the third set, Paulsen had four kills while Oberlin and Morgan Fialek had two apiece. The Trojans were in trouble late, trailing 22-18 and 23-20, but Carlyle had a kill and combined with Paulsen for a block at the net to put Fruitport up 24-23.

Paulsen hit the winning shot to seal the championship for the Trojans.

“All of our alumni was here, and we really wanted to win it for them,” Oberlin said. “It was a battle. It feels great. It was hard last year, but we came back and did it this year.”

Oberlin said the Trojans have been working on mental toughness, which they displayed by rallying to beat Whitehall in the semifinals, then winning three straight neck-and-neck sets against Mona Shores.

“That’s what we’ve been working on the whole season – maturity, pushing through and finishing,” she said. “It’s about keeping a positive attitude and playing the game the way we know how to play.”

Carlyle had 12 kills in the championship match while Paulsen and Oberlin had eight apiece. Kailey Carmean had 30 assists and served three aces.

Defensively, Trinity Busscher had 12 digs for Fruitport while Paulsen had 10 digs and four blocks.

Mona Shores defeated Western Michigan Christian 25-20, 27-25 in the quarterfinals, then cruised past North Muskegon 25-15 and 25-17 in the semifinals.

On the day, the Sailors were paced by Grace Hellman with 24 kills and Suriya VanderOord had 58 assists. Sasha Poland led the Mona Shores defense with 39 digs and Anya Herrela had five blocks.

“The ladies battled today,” said Mona Shores Coach Jim Vanderwall. “I can’t say that we had a ton of errors, which is awesome, and that’s something that you want to see as a coach. You don’t want to lose because of your errors.

“Fruitport played very well, it was a battle of two points here and there every set. It was a good win for them.”