FRUITPORT – What an impressive way to rebound from a tough defeat.

On Thursday, the Fruitport volleyball team was disappointed by a loss to Jenison in a showdown for the O-K Black Conference championship.

On Monday, the Trojans had to try to pull themselves together to face O-K Blue Conference champion Spring Lake in the first round of the Class B district tournament.

They rose to the occasion with an exclamation point, rolling past the talented Lakers in three straight sets, 25-22, 25-23 and 25-19, on their home court. 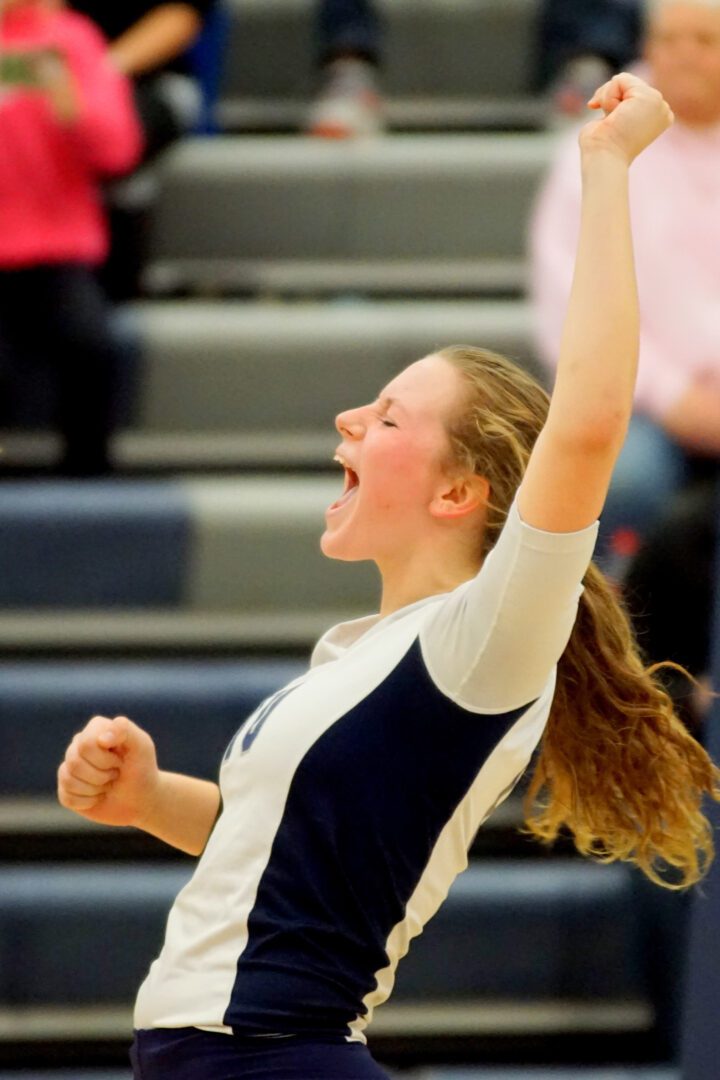 Fruitport, now 30-15-2 on the season, advances to the district semifinals on Wednesday against Orchard View at 7 p.m.

“We knew that it was going to be a tough match and a battle,” said Fruitport coach Nicole Bayle. “Spring Lake is a great team that did great things tonight, and I was proud of my kids because we came out prepared. We spent a lot of time talking about how important it is to be mentally prepared.”

The Trojans had a balanced attack offensively, led by Kylie Oberlin with 15 kills, Jordyn Carlyle with 14 and Rachel Paulsen with seven. Kailey Carmean chipped in with 44 assists on the night.

“This whole last week we have been working for it,” Oberlin said about her team’s preparation for districts. “This is the biggest rivalry that we have, so we wanted to do good, and we just put it all together tonight.”

Despite Fruitport’s straight-set victory, the match was extremely tight from start to finish.

Fruitport finished the opening set by scoring the final five points to overcome a late 22-20 deficit. The Trojans were led by Paulsen up front with six points in the set, while Busscher had a pair of strong service runs, including three aces. 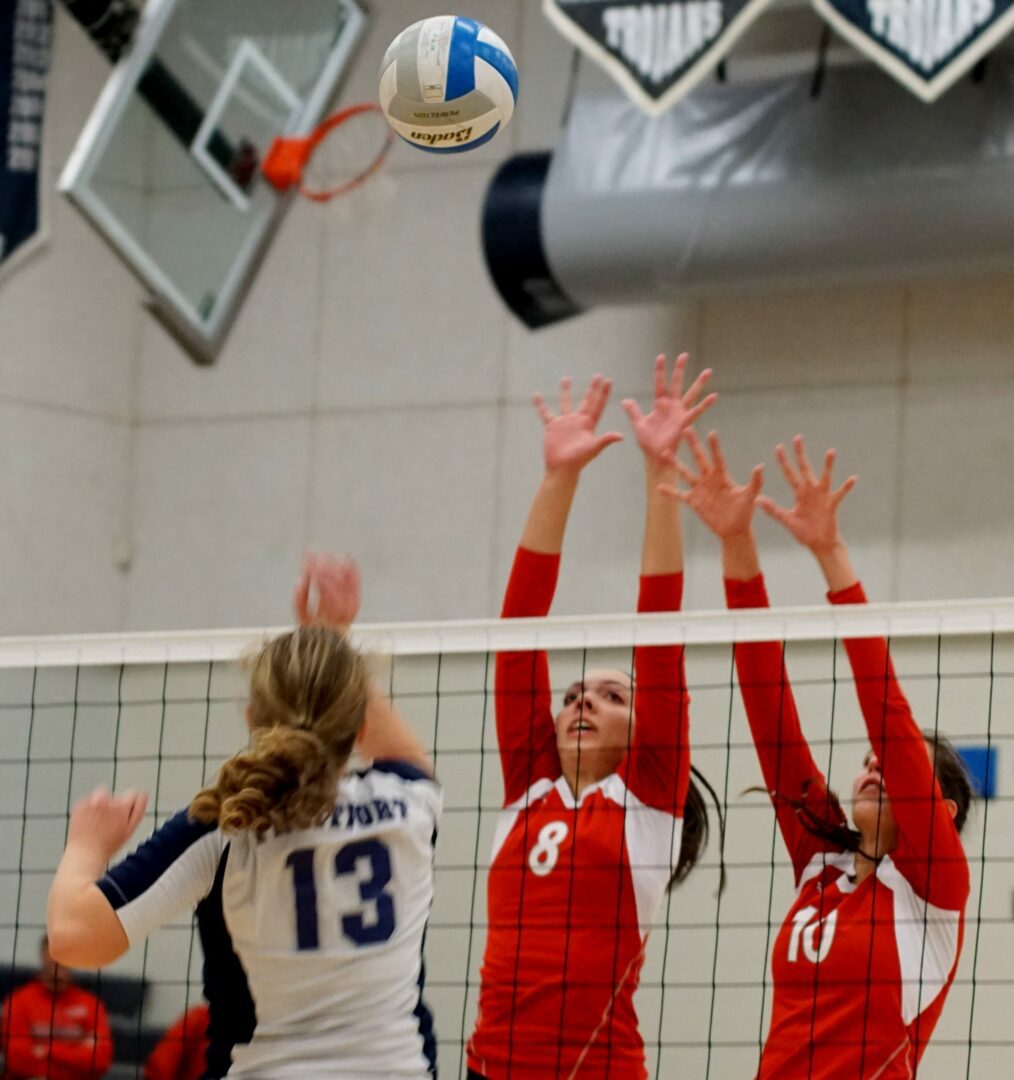 Spring Lake’s No. 8 Lauren Hellman and No,. 10 Jensen Sabo try to block the shot of Fruitport’s No. 13 Haleigh Winskas. Photo/Leo Valdez

The Trojans overcame a pair of two-point deficits early in the second set (2-0 and 12-10), and went on an 11-7 run to take a six-point advantage at 23-17. Spring Lake fought back and cut its deficit to 24-23, but Fruitport’s Carlyle closed the set with a point to give her team a commanding 2-0 lead.

Carlyle and Oberlin played solid for the Trojans up front, scoring five and four points in the second set, respectively.

Spring Lake led early in the final set but couldn’t increase its advantage to more than two points, then the Trojans broke loose with a 17-9 run to erase an early 10-8 deficit.

Oberlin paced Fruitport during the final set with six points and three blocks.

Spring Lake finished the season with a 30-6 record and a share of the O-K Blue Conference title.

“I know that it hurts right now to end with a loss, but this team has a great future,” said Spring Lake coach Sarah Bulthuis. “I am very pleased. This team did a lot of great things while adjusting to me as a new coach.”

The Lakers were led by Abbi Perkins with 10 kills while Jenna Core and Lauren Hellman had eight apiece. Madeline Zenas chipped in with 35 assists and Carley Bench had 19 digs for the Lakers. 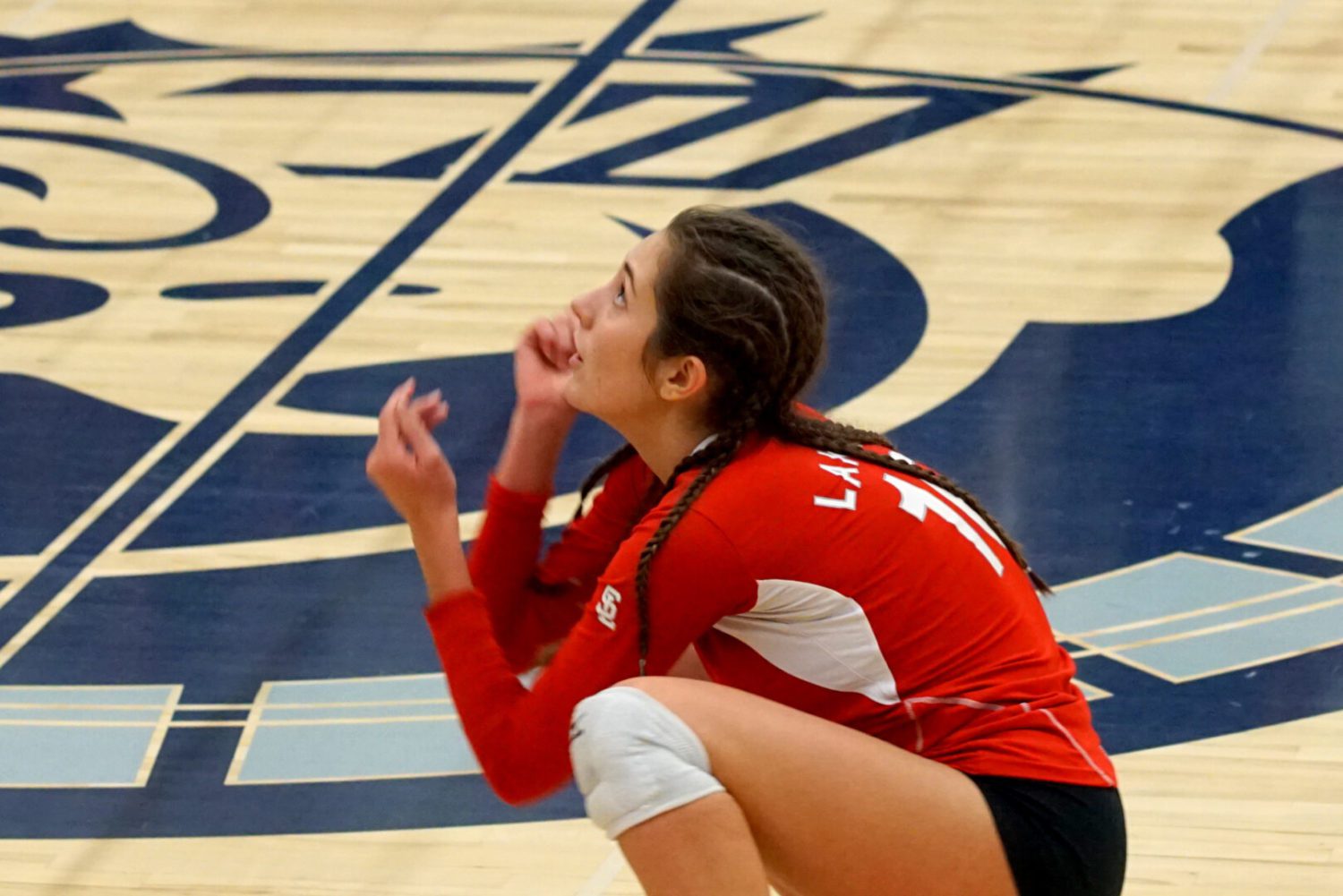 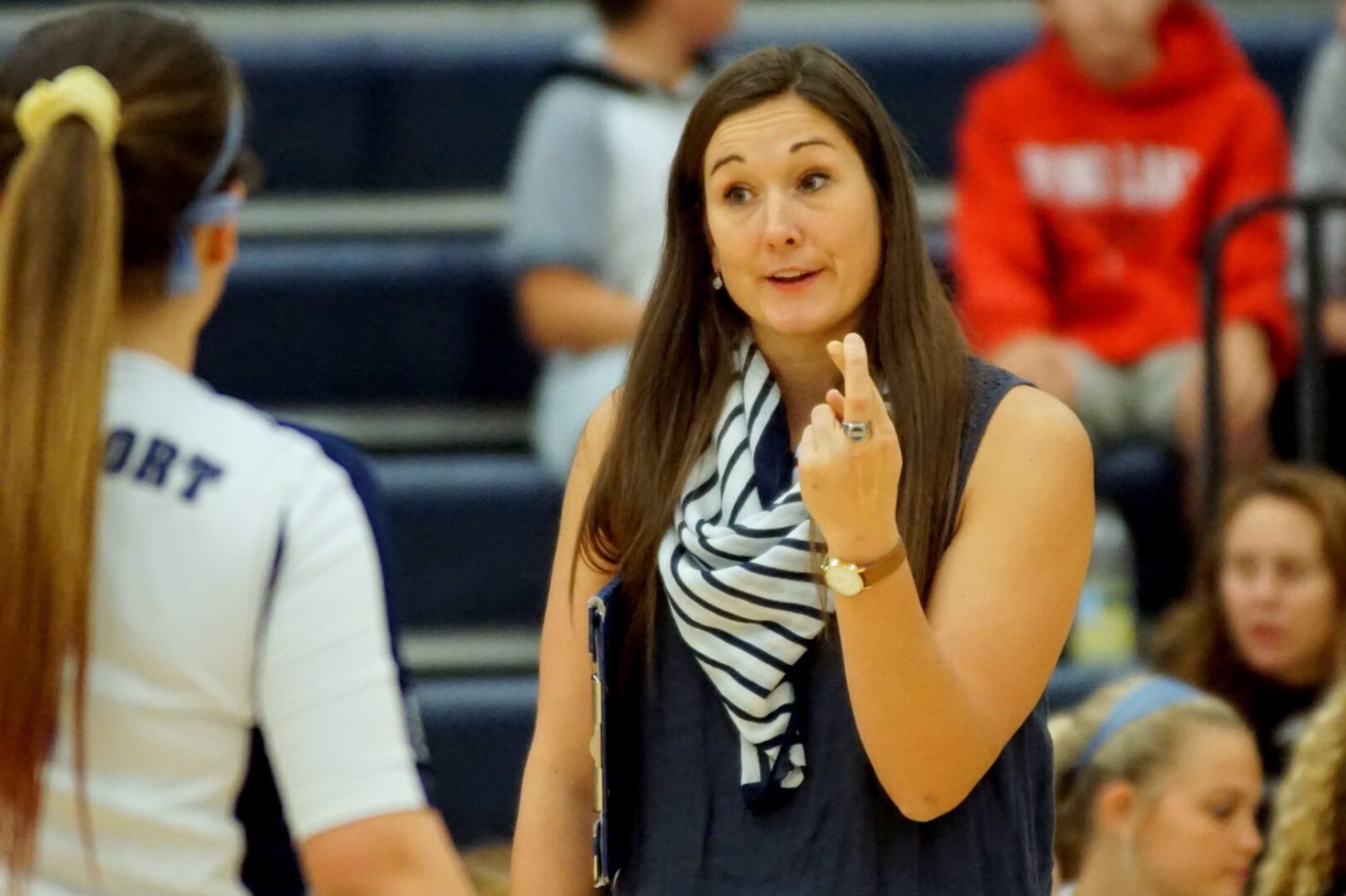 Fruitport Coach Nicole Bayle gives a sign to her team during the match. Photo/Leo Valdez 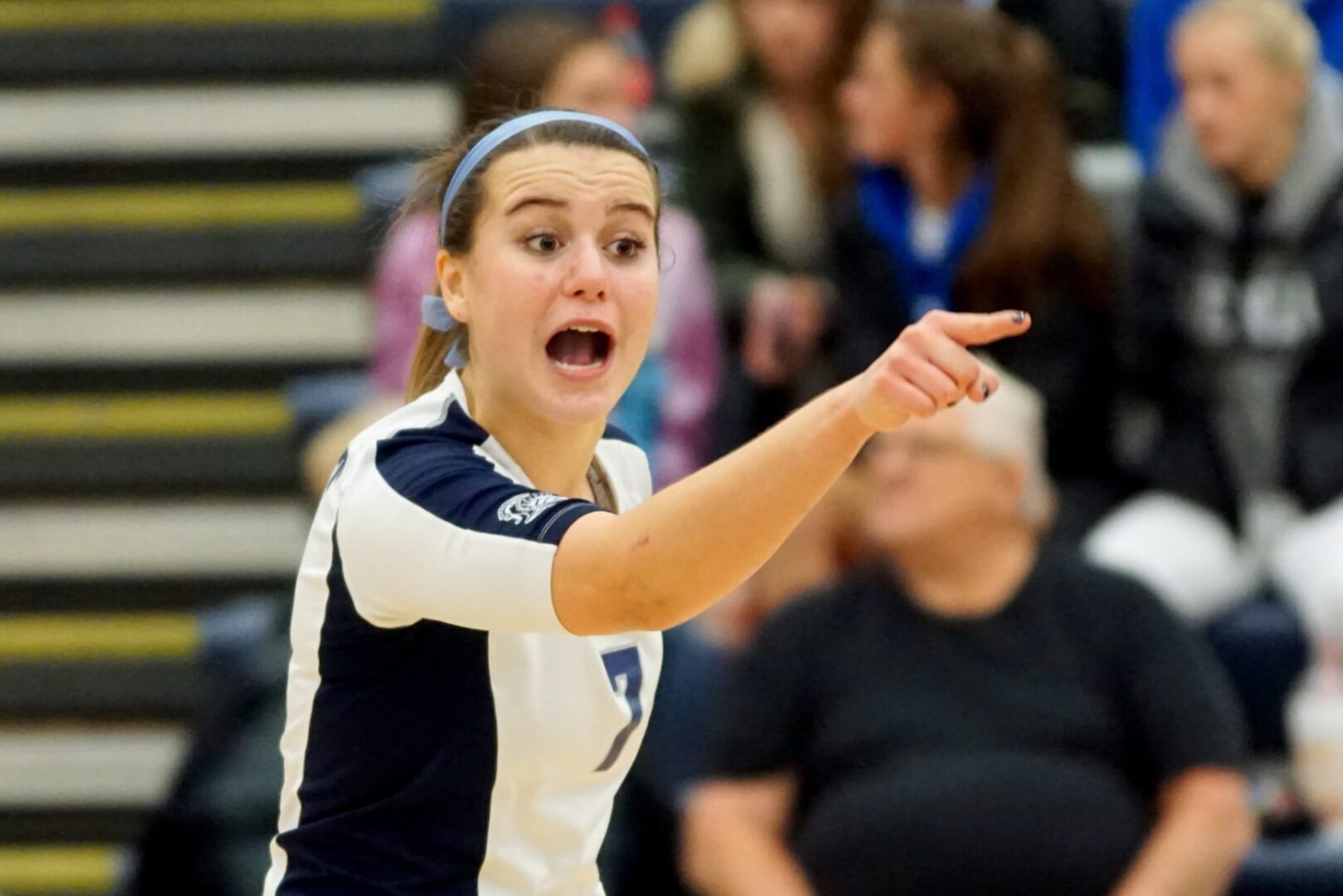 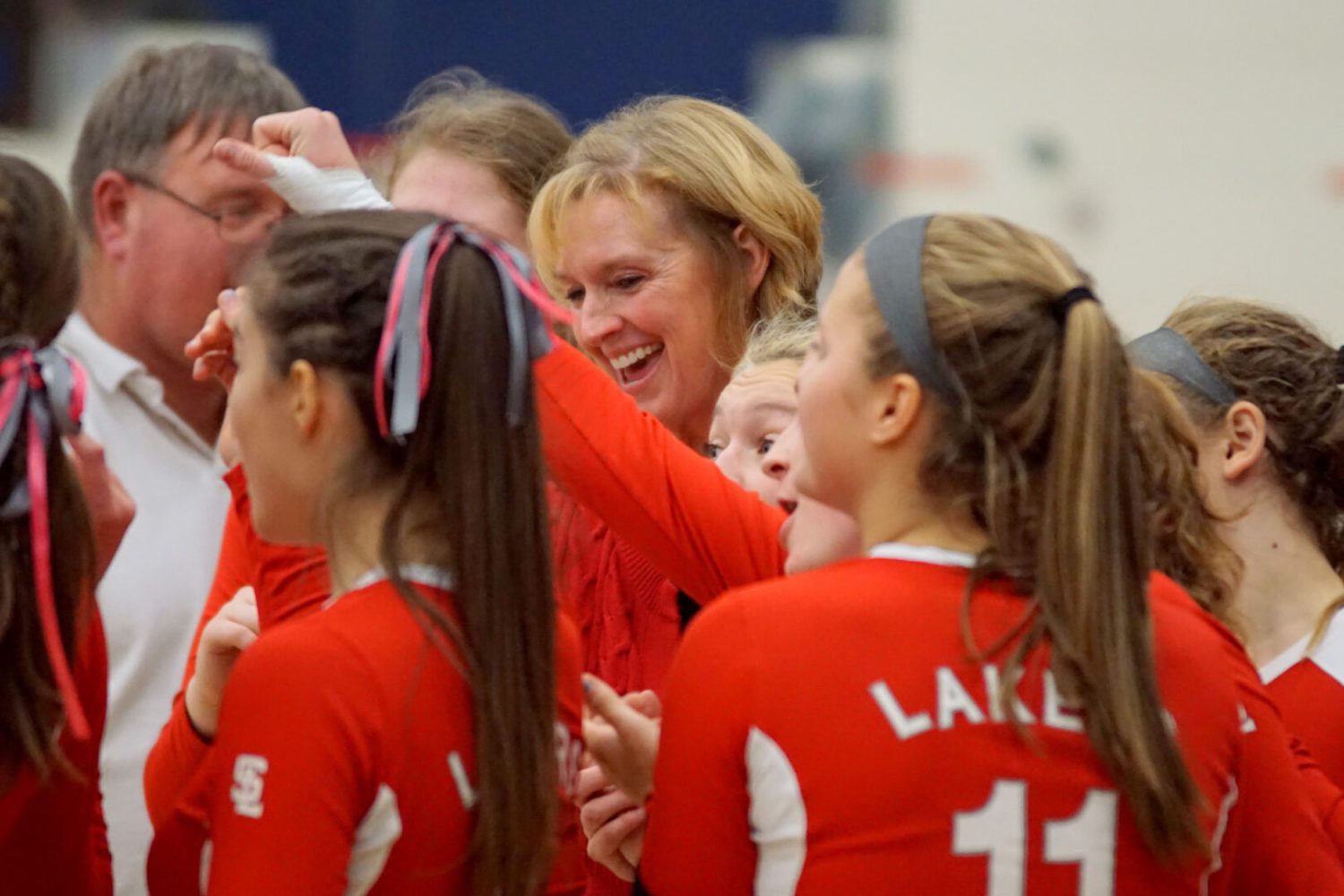 Spring Lake Coach Sarah Bolthuis fires up her team during a time out. Photo/Leo Valdez