HOLLAND – After having their streak of five consecutive district titles snapped last season, the Grand Haven soccer team was eager to reclaim its throne this year.

The Buccaneers did just that, scoring two second half goals to come away with a 2-0 win over Hudsonville on Saturday in a Division 1 district championship game in Holland.

“It feels great, it really feels good,” said Grand Haven head coach Aaron Dean. “I think every team starts off the year setting high goals, so this was something we wanted to accomplish.”

The Bucs, who are now 15-3-3 on the season, had the better record coming in, but were given all they could handle from a determined Eagles squad. 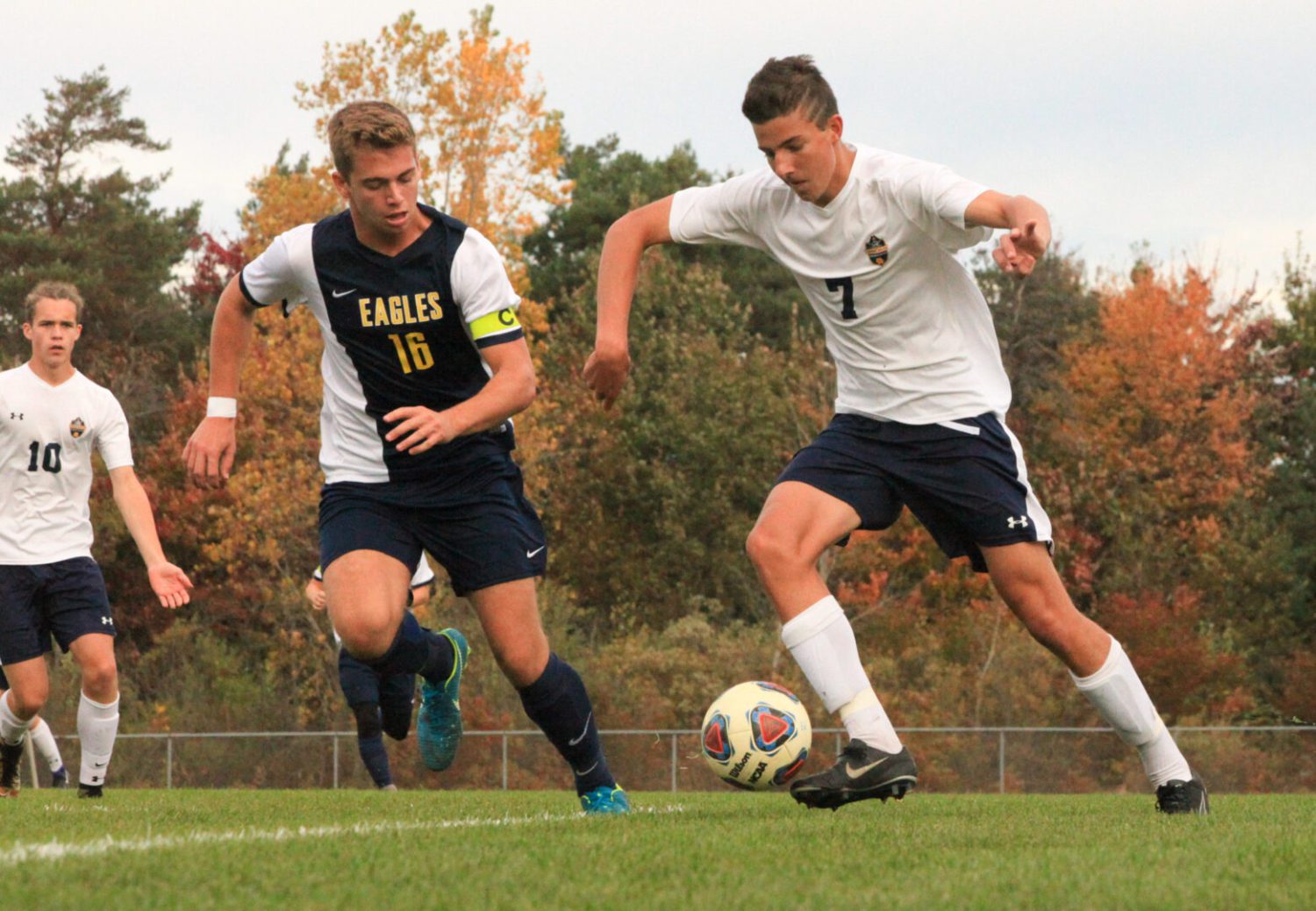 Mason Mahacek makes a cut with the ball past Hudsonville’s No. 16 Ben Dykstra. Photo/Jason Goorman

“Hudsonville was tough,” Dean said. “They really dominated that first half. I felt like we were kind of fortunate to get out of there at halftime (with a scoreless tie).”

Both teams struggled to finish off scoring chances in the first half. The Eagles failed to convert on four corner kicks, while Grand Haven sent several shots over the net.

The Buccaneers finally broke the scoreless tie in the 18th minute of the second half.

A penalty on Hudsonville gave Grand Haven a free kick, which was taken by Connor Lund. His shot was saved by Eagles keeper Grant Sitzema, but Sitzema was unable to keep the ball controlled. Bucs defender Trent Perkins, playing up on the set play, corralled the ball and found the back of the net to put Grand Haven on top.

“It felt amazing for sure,” said Perkins, a senior. “The player who had been marking me was all over me on the previous free kicks, so to get away from him and see the deflection felt amazing.” 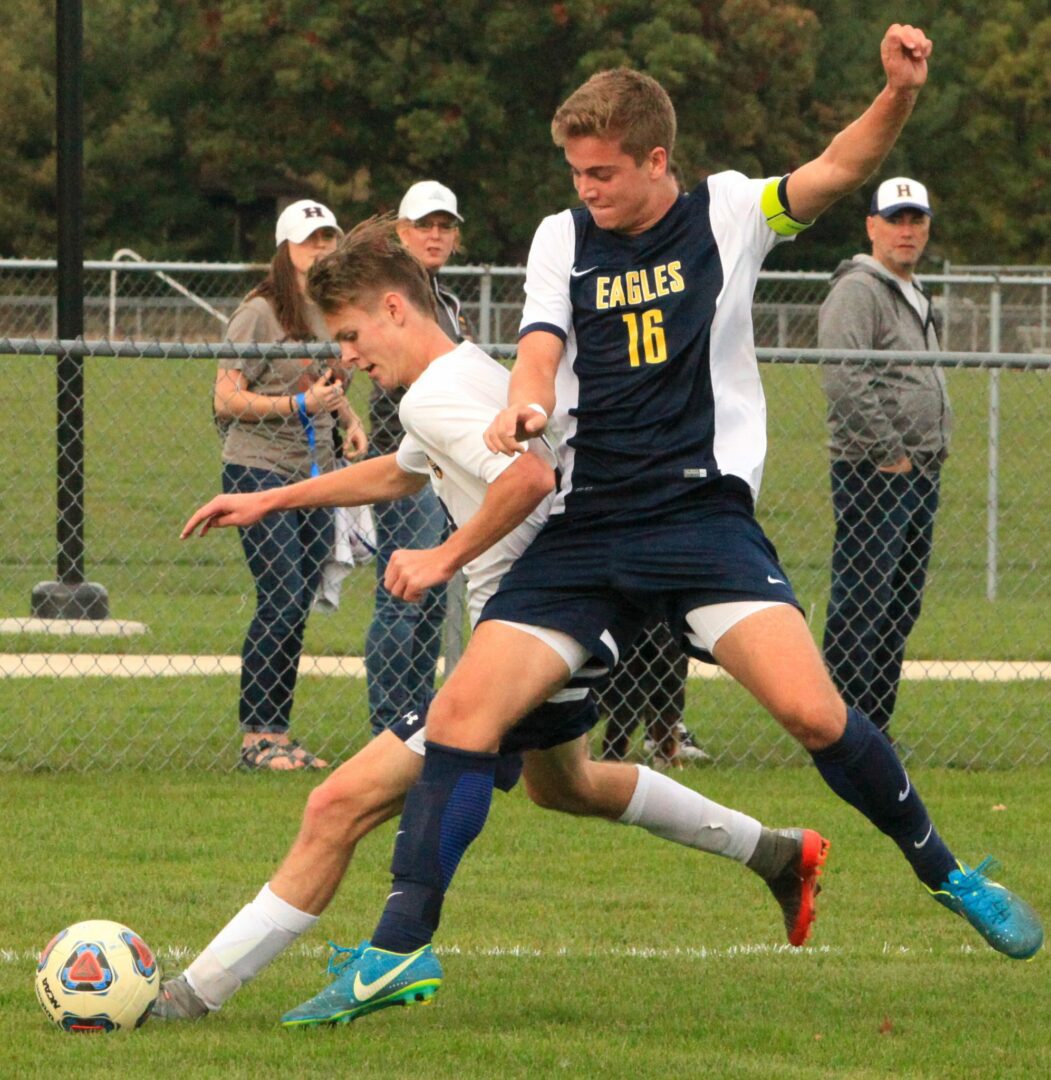 “Trent is in on those free kicks,” Dean said. “He’s obviously a tall kid, so he’s a big target for us. He’s a smart player. I think his intuitiveness and understanding of where that ball is going is huge. We needed it.”

The Bucs added their second goal with just three seconds remaining when Mason Mahacek dribbled through the defense and shot one past the keeper.

Hudsonville’s comeback effort took a major hit when freshman Jaeger DeBoer was given his second yellow card, disqualifying him from the game with 10:29 to play. From then on, the Eagles played a man down and Grand Haven controlled the pace.

There were four yellow cards issued in the game (three to Hudsonville, one to Grand Haven) and very physical play throughout the contest.

“There’s a lot more on the line in a game like this,” Dean said. “This is the end, you’ve got to give it everything you’ve got. I think kids battle that way.”

Despite the win, Dean knows his team will need to improve to advance further into the state tournament.

“We need to play better,” he said. “We were missing easy passes. I think we were trying to force it too much. We just, technically, weren’t really clean.”

Grand Haven advances to regional play, where they will face perennial power East Kentwood in the semifinals at Portage Northern on Tuesday at 5 p.m.