Riegler has never lost the final game of the season during his varsity career. It’s been a majestic run of success that few high school teams in the state of Michigan, or even across the nation, have ever dreamed of.

“It’s really been amazing to be a part of this,” Riegler said as his 7-0 Crusaders prepare for their toughest challenge of the thus far – a matchup with undefeated Montague at MCC’s Kehren Stadium on Friday in the final game of the regular season. “When I was younger, I was really into soccer, but I’m glad I ended up choosing football. It was a tough decision, though.”

Riegler, a senior cornerback and wide receiver, said a key to MCC’s remarkable stretch of dominance has been success breeding success. He recalls senior leaders such as Alex Lewandoski in 2013 and Nick Holt a year later, who laid the groundwork for the school’s current string of four straight state championships. 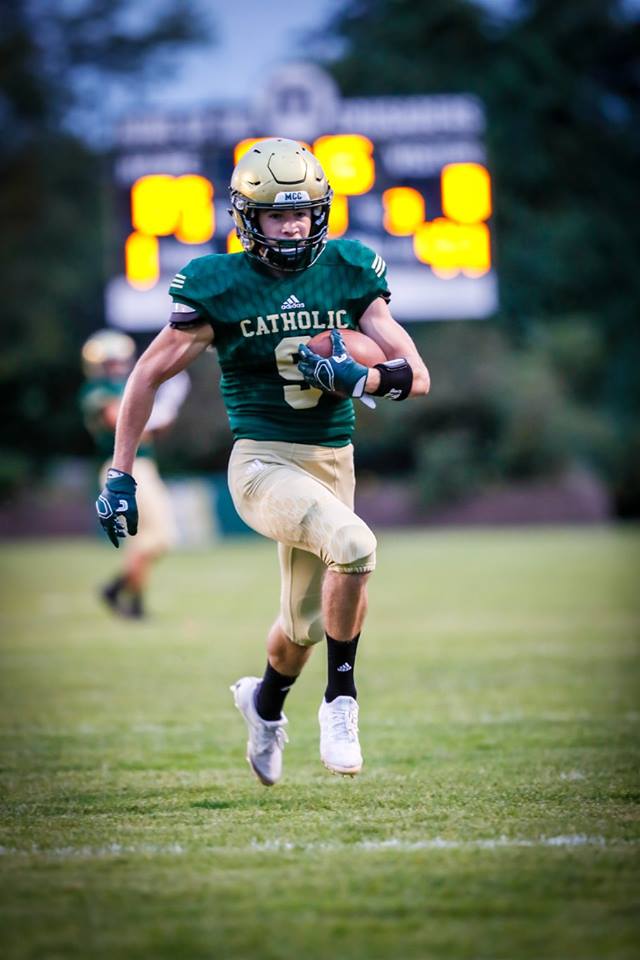 “Just the way they held themselves to a higher standard, on and off the field, and if they made mistakes, they wouldn’t let it affect their play on the field,” Riegler said. “The younger players saw that and we’ve tried to carry that on.”

Riegler said there’s an unwritten rule at MCC on how players should go about their business, and it’s strictly enforced:

“If someone wants to play selfish, it’s quickly shut down by both the coaches and players,” Riegler said.

For Riegler, MCC football has been a constant since he was a child a child. His father, Andy, was the starting quarterback on MCC’s state championship squad in 1990, so the tradition of success has been passed on from father to son.

“They were really good that year, and (the players on that team) had a few (Division 1) offers,” Riegler said. “And my dad had some offers to play at the next level. But I got three state titles to his one, so I guess I got him there.”

Riegler said his dad never pressured him to follow in his footsteps, yet he always found his way to the Crusaders’ sidelines.

“He was a water boy when he was in elementary school for the varsity team, so a lot of his life has been around our program,” MCC Coach State Czerwon said about Riegler.

After playing primarily in the defensive secondary through his first three years of varsity, the 5-foot-11 Riegler has expanded his role with the Crusaders this fall. He’s become a favorite receiving target for quarterback Cameron Martinez, and also utilizes his speed on jet sweeps. 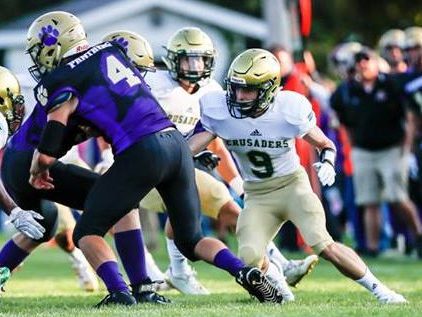 Riegler goes in for the tackle during MCC’s win over Frankfurt. Photo/Tim Reilly

He has eight catches this year for 83 yards and one offensive touchdown.

But his specialty is still bottling up opposing receivers on defense. This fall he’s tied for the team lead with Martinez with three interceptions, including one he returned for a touchdown.

“As his body has matured, he’s been able to do more and more for us,” Czerwon said. “He’s a long 5-11, with long arms, and his straight-on speed is outstanding.”

The Crusaders’ defense hasn’t dropped off much from last season, when the unit allowed just 77 points in 14 games. This fall, MCC has allowed just 48 points, with its starting defense giving up only two offensive touchdowns.

“Speed has become our philosophy,” Czerwon said. “With a school our size, after awhile you run out of big people. But we have defenses built on speed, where everyone can run to the football.”

While he’s excited about the big game against Mpntague, and pushing for the school’s fifth straight state title, Riegler’s interests extend far beyond the football field.

In July, he began his own clothing line dedicated to raising awareness and funds for the Great Lakes.

“The government’s proposed cuts kind of motivated me to do this,” he said. “I started it on my own, and I also took a business class at Aquinas College, which showed me how to start your own business. On school nights in February and March I started coming up with ideas. And I used money I had saved from landscaping jobs.”

“We named the company Oshki, which means ‘fresh’ in Ojibwa, which is the Native American group that lived near the Great Lakes,” Riegler explained. “So far we have two cotton designs and a Dri-fit design.”

Riegler, whose family lives minutes from Pere Marquette Beach and visits Lake Michigan often, said he wants to make a difference, so he’s donating five percent of the company’s profits to the Alliance for the Great Lakes.

“The response has been really positive, actually better than I ever expected,” he said. “We made $10,000 in sales in the first month.”

Riegler, who plans to major in business at either the University of Michigan, Notre Dame or DePaul, said he’s been thrilled at the response his company has received in Muskegon and Grand Rapids, and hopes to gain interest in Traverse City and other coastal cities in Michigan.