MUSKEGON – The Muskegon Lumberjacks have struggled offensively early this season.

The Lumberjacks were shut down in their season opener on the road last Friday, and were

blanked through two periods the following night, before rallying to win.

Unfortunately for the Jacks, their home opener on Friday followed the same script, and this time there was no comeback victory.

The Lumberjacks attempted to rally but fell short in a 3-2 loss to the defending Clark Cup champion Chicago Steel at L.C. Walker Arena in front of 2,006 fans.

Muskegon is now 1-2 on the season.

The Lumberjacks will try to bounce back on Saturday night at home when they face the Team USA Under-18 squad. Faceoff will be at 7:15 p.m. 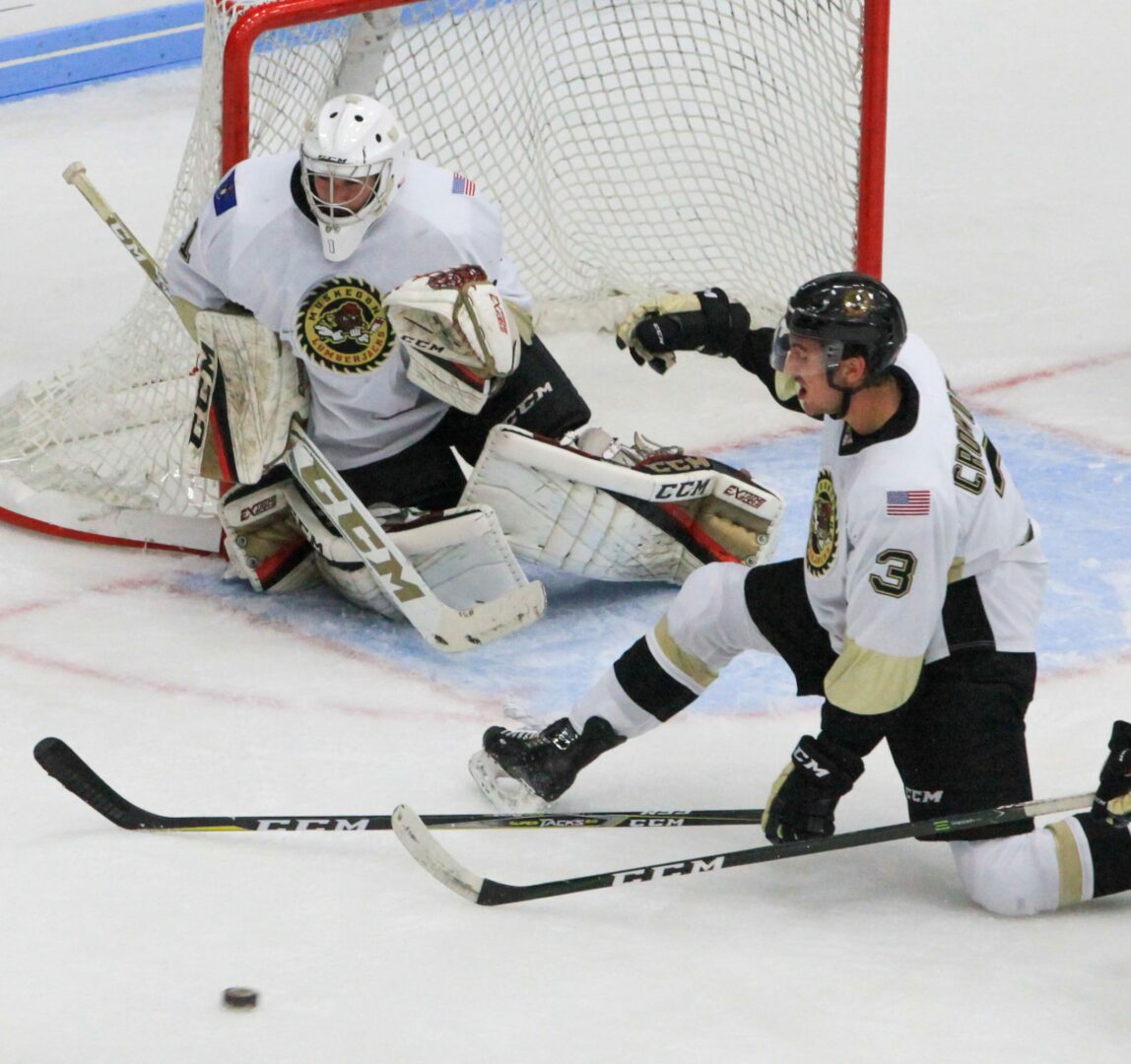 “It’s a good hockey team that we played, and its early in the year,” said Lumberjacks coach John LaFontaine. “We are just looking for good things, we have a lot of positives and a lot to learn from, but these guys have made strides from last week. All we are going to do is get better every week.

“We want to get off to better starts, but this is a new team with a lot of new guys, and we are establishing our identity on how we play.”

The Steel opened the scoring at the 8:31 mark of the first period on a goal from Jordan Seyfert.

The Lumberjacks responded with a goal from Blake Evennou at 17:27 of the first period. Nash Nienhuis and Sam Renlund assisted on the tally.

Chicago regained its lead with the lone goal of the second period at the 12:16 mark. It came on a power play strike from Baker Shore to give the Steel a 2-1 advantage.

The Steel added to their lead 5:08 into the third period when Jack Dugan scored on a penalty shot.

Muskegon tried to mount a comeback in the final stanza. The Jacks outshot the Steel 17-6, but managed only one goal, from Jachym Kondelik at the 17:21 mark, to cut their deficit to 3-2 . 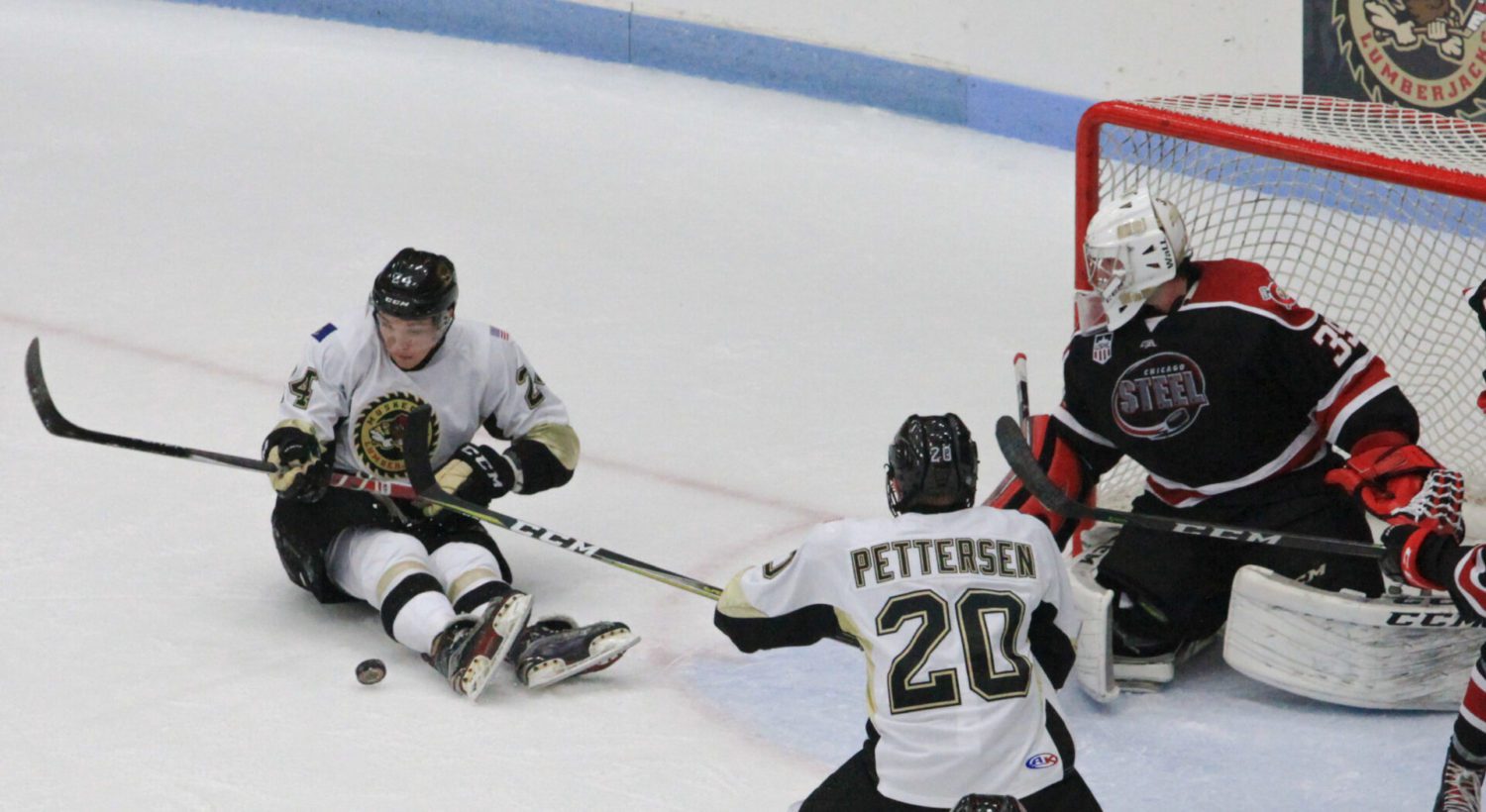 Donovan Ott tries to work the puck on the ice while No. 20 Emilio Petersen looks for an opening. Photo/Jason Goorman 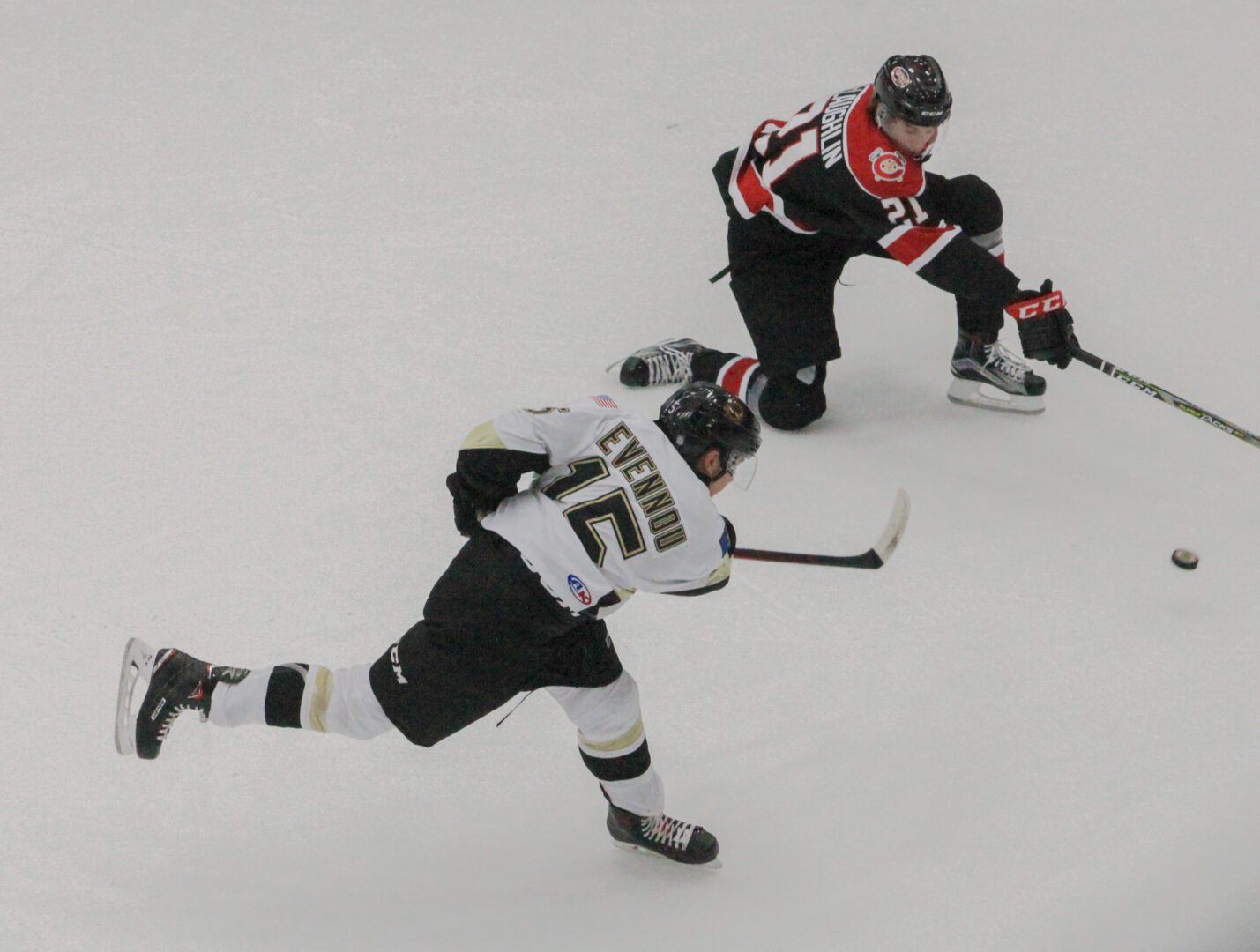 Blake Evennou tallies a slap shot that found the back of the net for his first USHL goal. Photo/Jason Goorman 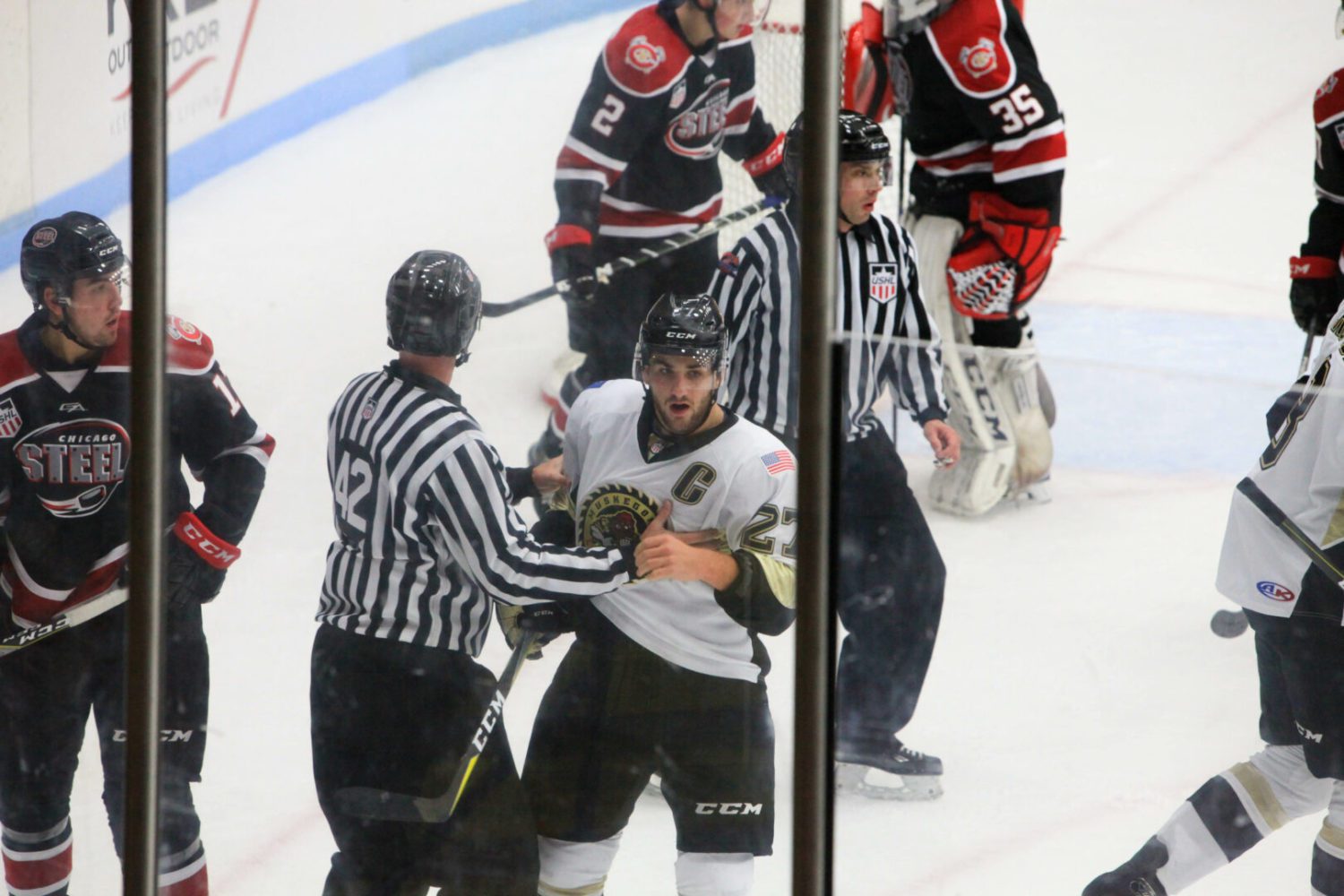 Lumberjacks captain No. 27 Anthony DelGaizo gets held back by the referee at the end of a play. Photo/Jason Goorman

Matej Pekar brings the puck up the side of the boards for Muskegon. Photo/Jason Goorman 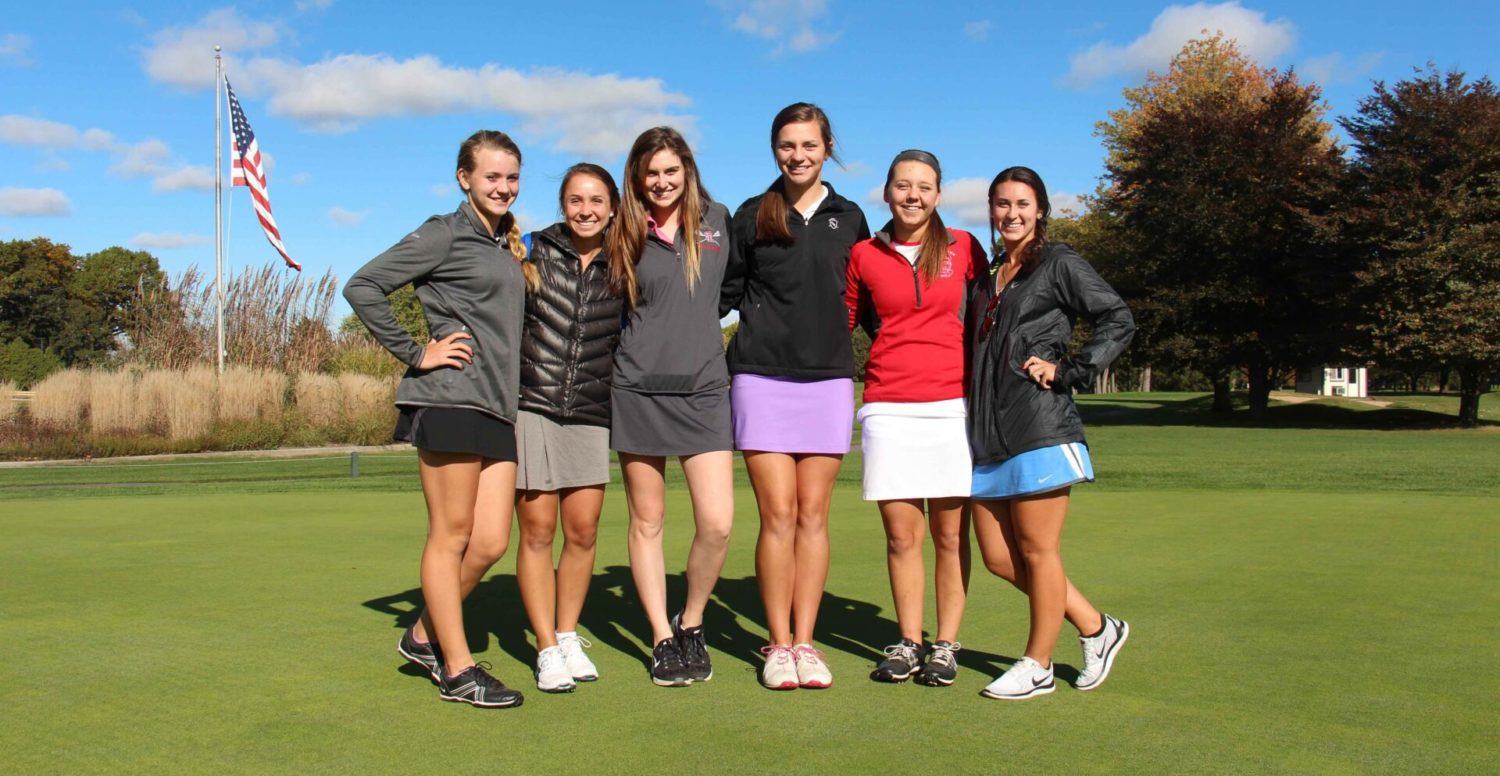