MONTAGUE – The state football playoffs have arrived, but the Montague Wildcats look pretty much the same as they did

throughout the regular season:

The unbeaten Wildcats turned in their latest one-sided performance on Friday with a 47-0 win over Lakeview in a Division 6 Pre-District game on their home field.

“We played great,” said Montague head coach Pat Collins. “We kept it real simple this week in practice. Our guys just executed really well. I was pleased with that.”

The Wildcats moved the ball with ease throughout most of the game. Running back Bryce Stark once again led the charge with 254 yards and four touchdowns. 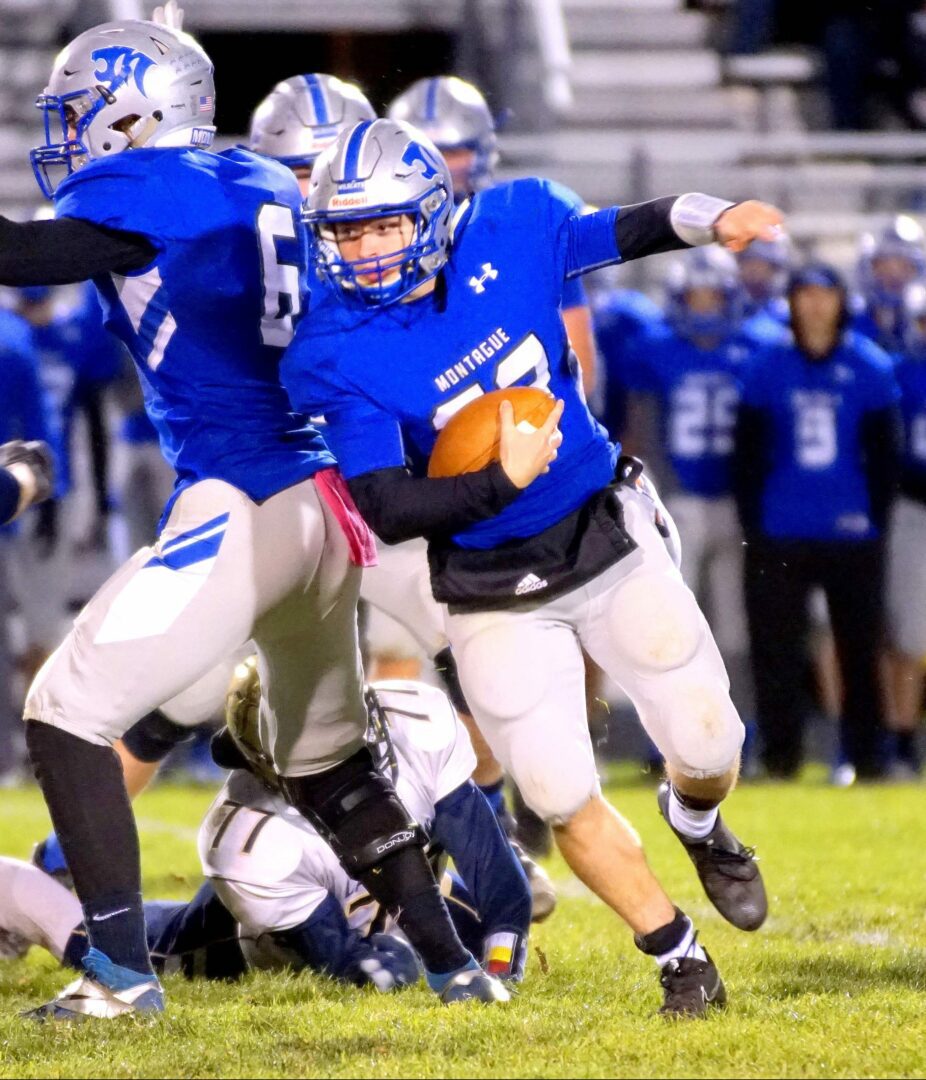 “We thought we could just run our inside zone and kind of go from there,” Collins said. “It started with our line. There were able to get a big-time push, a vertical push.

“Once they got that vertical push it created a big seam for (Stark) to cut back. He just made it look easy there in the first quarter.”

The win sets Montague up for a district championship game next weekend against undefeated Kent City. The Wildcats will get a shot at revenge for last season’s season-ending 20-19 loss to the Eagles.

“We just have to play a solid game,” Collins said. “Last year we had some young guys. They played their hearts out, but when you have young guys you make some mistakes.

“We need to use our maturity and experience to avoid those mistakes.”

Montague scored on each of its first four possessions.

Quarterback Sebastian Archer got the scoring started with a two-yard run. Stark added touchdowns from 10 yards and three yards out to make the score 20-0 at the end of the first quarter.

Stark found the end zone for the fourth time with 8:36 to play in the third quarter on a 34-yard run. Archer added his second touchdown on a 15-yard keeper, then Blake Jones tacked on the final score with 8:14 to play with a six-yard touchdown run.

The Montague defense allowed Lakeview to move the ball at times, but avoided big plays to notch the shutout.

“We didn’t want to give up any major runs or anything,” Collins said. “We respect their offense highly. They’ve done some things against some good defenses. We knew they’d move the ball, but we had to be smart in the red zone. Our guys did a good job of rallying to the ball.”

The Montague defense had two interceptions and a fumble recovery, all inside the 30-yard line. Remington Schneider and Brennan Schwarz each picked off a pass and Joe Scott forced and recovered the fumble.

Stark carried the ball 19 times to achieve his 254 yards, including seven runs of 10 or more yards. Archer finished 6-for-15 through the air for 109 yards and an interception, and added 43 rushing yards with two touchdowns.