MONTAGUE – As if its undefeated record wasn’t a big enough statement already, the Montague football team

In a victory that may shoot them up to state champion contender status in Division 6, the Wildcats dominated West Michigan Conference rival Oakridge at home, using a ferocious defensive effort to shut down the Eagles, 40-0.

Montague improves to 7-0 overall and puts itself in the driver’s seat for a league title with a 6-0 record. Oakridge falls to 5-2 overall and 4-2 in conference play.

The blowout was the Eagles’ largest setback since a 41-point loss in last season’s district final to eventual state champion Ithaca. Montague’s offense was in prime form, rolling up 354 yards and no turnovers, but the Wildcats defense stole the show, limiting Oakridge to 30 total yards. 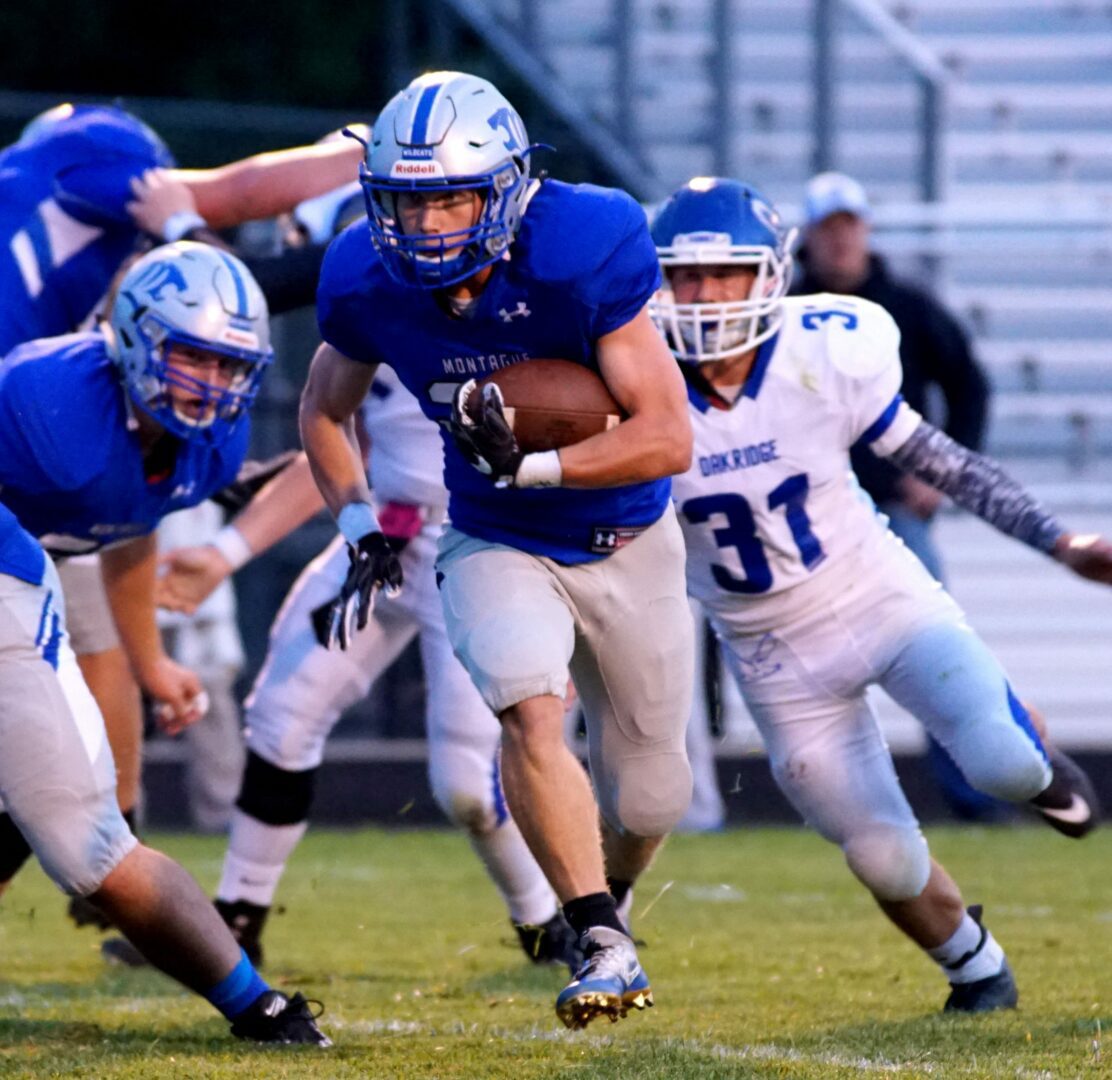 “The defense made its mark tonight,” said Montague middle linebacker Sam Shugers, who had 16 tackles. “Fantastic is the word I’d use. Is was all about reading your keys. Reading your keys, everyone doing their job, and going out and winning.”

The Wildcats were outstanding in plugging the run, but Oakridge shot itself in the foot repeatedly with five blundered shotgun snaps between the center and quarterback. As a result, the Eagles had negative 47 rushing yards in the first two quarters and faced a 26-0 deficit at halftime.

“They’re high school kids and sometimes that happens,” added Montague coach Pat Collins about Oakridge’s snapping issues. “I remember something very similar happened to us at their place, but in our punt game. And they really put it to us. Kids get excited and mistakes happen. So we’ve been there before, and it’s not fun.”

Oakridge lost 47 yards on bad snaps in the first quarter alone, and another snap miscue allowed Montague’s Joe Rupert to recover a fumble in the end zone to give the Wildcats a 12-0 lead a minute into the second quarter.

Montague quarterback Sebastian Archer was tremendous orchestrating the Wildcats’ up-tempo, no-huddle offense, completing 9 of10 passes for 160 yards in the first half, including a 75-yard strike to Kenyan Johnston on a post pattern that put Montague up 19-0. 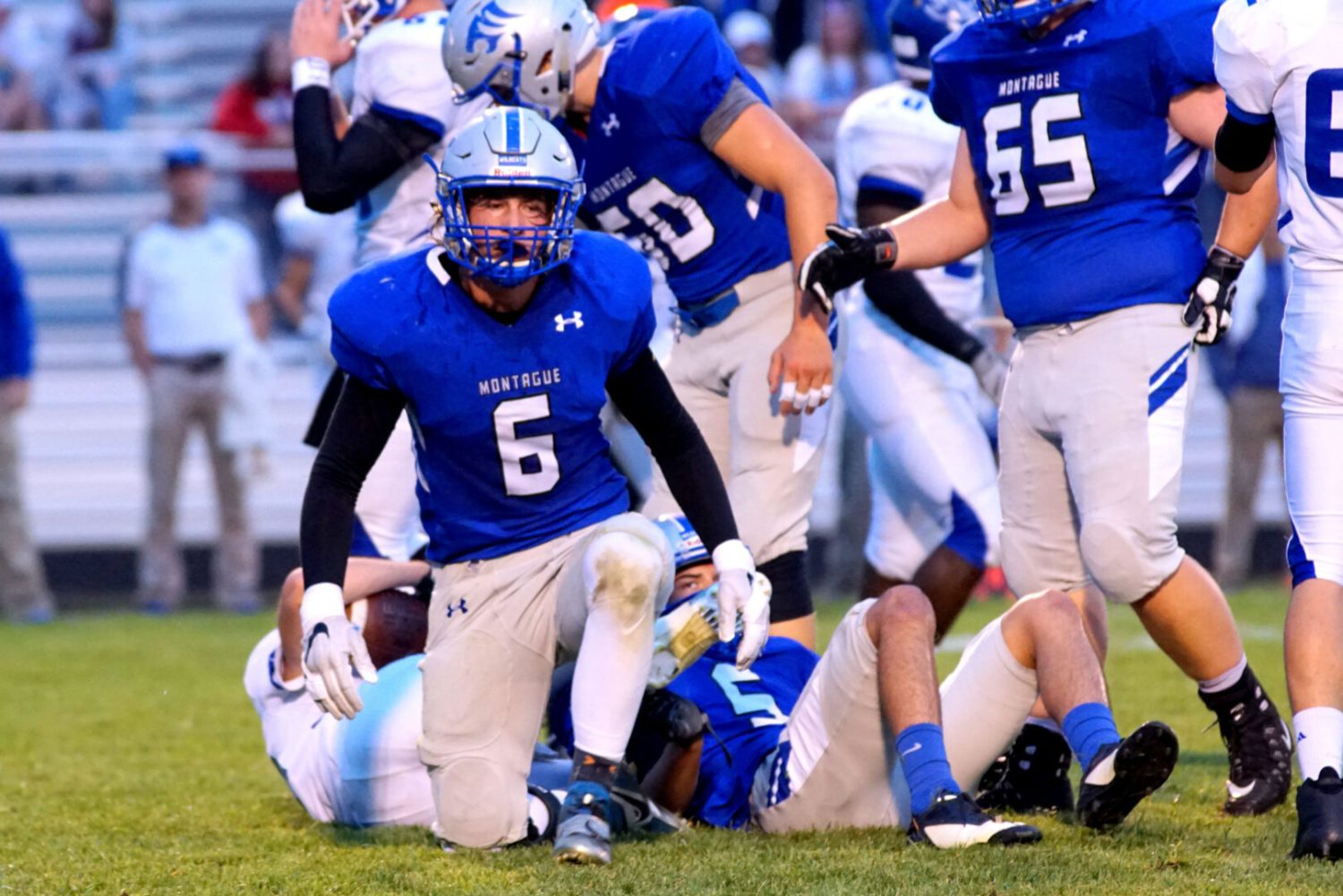 Montague’s No. 6 Joe Rupert gets up after making the tackle. Photo/Leo Valdez

Wildcats’ junior running back Bryce Stark, who scored four touchdowns and rushed for 141 yards on 20 carries, gave his squad a 26-0 lead with 43 seconds remaining in the first half when he burst up the middle for a 15-yard touchdown.

Stark received a nice downfield block that allowed him to streak 72 yards for a touchdown with 8:47 remaining in the third quarter, and he put the mercy-enforced running clock into effect on his final touchdown run, a 13-yard score with 11:29 left in the fourth.

Even when Oakridge appeared to get on the scoreboard, it was mistakenly taken away. With 6:10 left in the third quarter, an errant whistle by the referees left Eagles’ running back Blake Masterman with a 3-yard gain, although he hadn’t been tackled and had broken through the Wildcats’ line for what would have been a 67-yard touchdown.

Sophomore running back Leroy Quinn led the Eagles with 37 yards on 14 carries.

Montague defensive tackle Luke Marsh, who had two sacks in the first half, said he believes his team has the opportunity to win a state championship, and Collins is starting to share his players’ feelings.

“I feel like we have a great team,” Collins said. “We looked different than we did 2-3 weeks ago, which is a good sign. They’re continuing to climb and get better. They’re moving. We’re moving now. They’re improving every day, which is our goal, and I was impressed with their performance.”