SPRING LAKE – Some longtime coaches retire and end up regretting it.

Sarah Bulthuis was not one of them.

She loved the 27 years she spent as the varsity volleyball coach at Spring Lake High School. But she was very comfortable with her decision to step aside in 2013, after her team won a district championship and advanced to the Class B regional finals.

Bulthuis turned the job over to her daughter, Cassidy Hazekamp, and happily watched the action from the bleachers for two years. She thought the high-pressure coaching days were behind her, and she was OK with that. 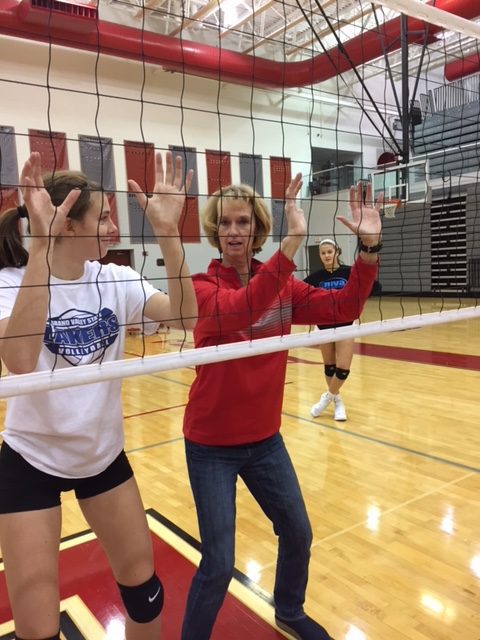 Coach Sarah Bulthuis works with a player at the net during a recent practice.

But four years after retiring, Bulthuis is back on the Spring Lake bench for another stint as head coach, out of loyalty to the school, the team and her daughter.

While that was not exactly her plan, she’s having a lot of fun.

That’s because her Spring Lake Lakers are having  a great year, posting a 30-5 regular season record and winning a share of the championship in the tough O-K Blue Conference.

Now Bulthuis and the Lakers are ready to test themselves in an extremely difficult  Class B district tournament this week. They will start on Monday with a tough assignment against a very good Fruitport squad on the Trojans’ home court.

The winner will advance to Wednesday’s semifinals, which promises to be another bruising battle against the winner of the quarterfinal match between Whitehall and Montague.

“You’re going to have to play those good teams at some point, anyway, so maybe it’s better to get them right away,” said Bulthuis, whose team is ranked eighth in the state in Class B. “We’re excited to play them. We have played good teams in our league, so hopefully that has prepared us well for districts.” 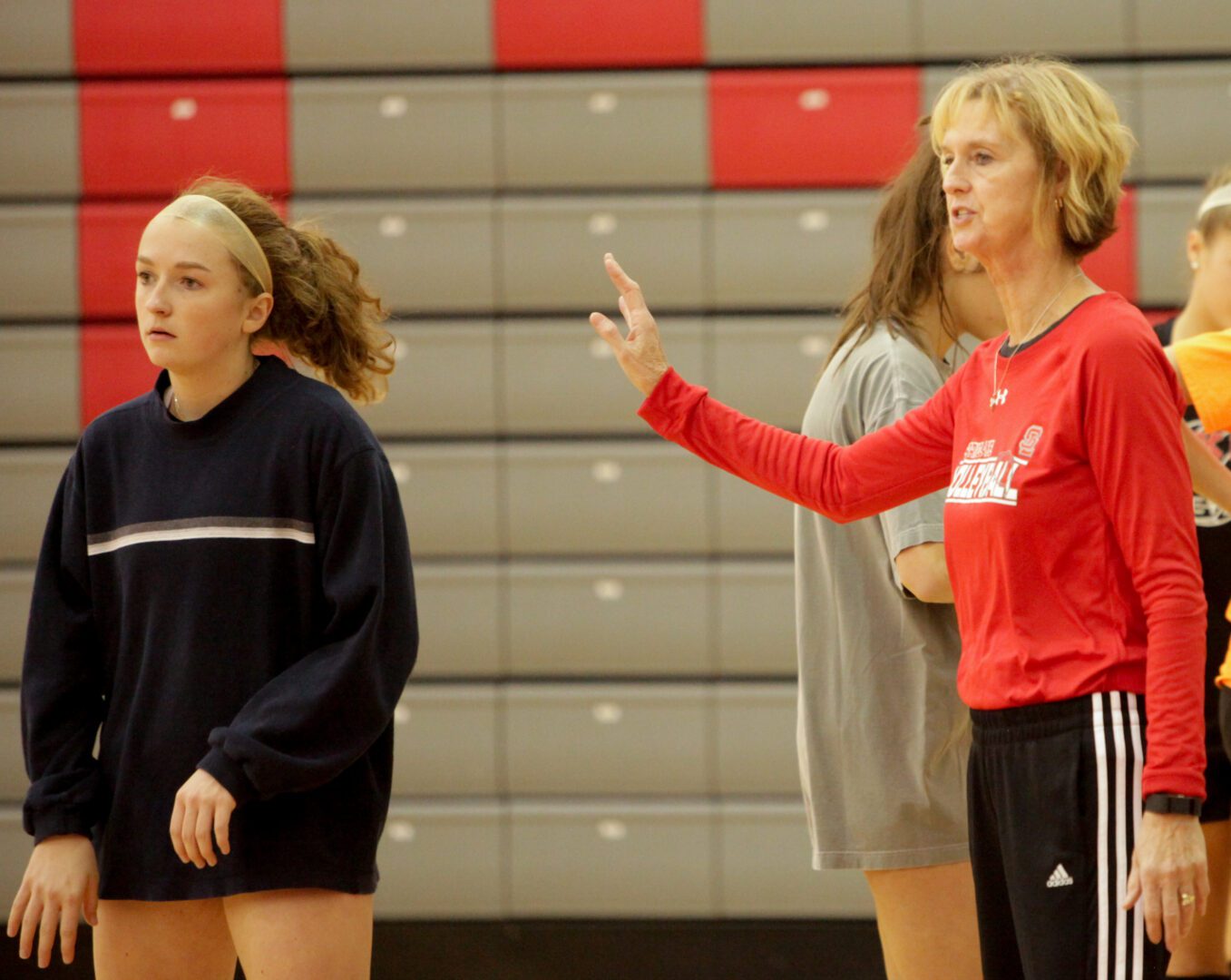 Coach Bulthuis instructs her team during a drill at practice over the weekend. Photo/Jason Goorman

Not long ago, Bulthuis never dreamed she would be preparing the Lakers for another district tournament. Under different circumstances, she may have passed on the chance to take over the team again.

But family ties brought her back.

It seems her daughter was starting her varsity coaching career just as she was starting her family. Two baby girls came along within 18 months, and it soon became apparent that coaching had to take a back seat to motherhood for awhile.

But Hazekamp didn’t want to give up the Spring Lake job for good, so she asked her mom to help think of somebody who might be willing to coach for a season or two, until she was ready to return.

Of course there was only one realistic candidate for that role, and Bulthuis accepted the challenge. Hazekamp stayed on as assistant coach, and mother and daughter have worked well together.

“When she asked me to help her find (a temporary coach), I told her to let me think about it for a day or two, and see if I could come up with a person and a plan,” said Bulthuis, an elementary physical education teacher at Jeffers Elementary in the Spring Lake district. 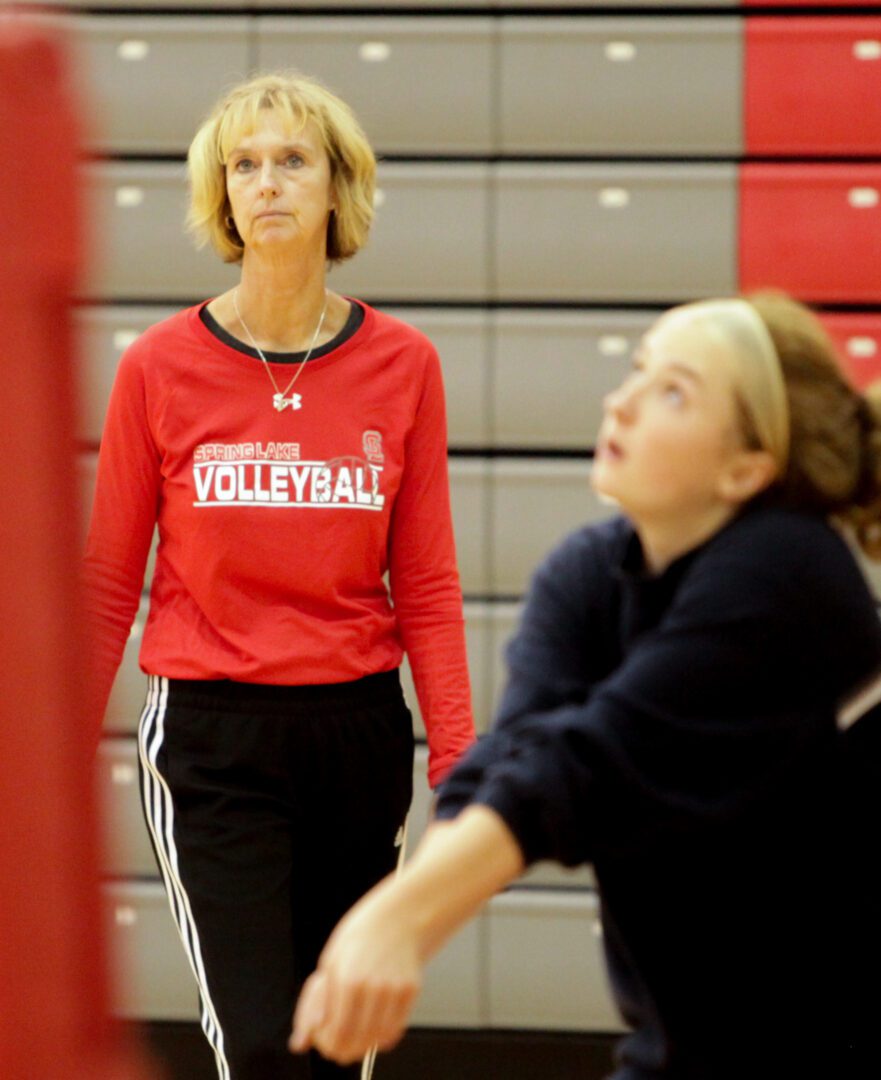 Bulthuis pays attention to the volleyball in the air during a drill at practice. Photo/Jason Goorman

“I went home and asked my husband what he would think if I decided to go back and do it again for a year or two, and he said it was totally my call.

“So I went and asked Cassidy, ‘What about me?’ and she said that would be awesome. I told her I don’t want it for another 20 years. She can have it back whenever she is ready.”

This isn’t the first time Bulthuis has ended up altering her life plans for volleyball.

After graduating from Spring Lake High School, she became a member of the women’s basketball team at Muskegon Community College. MCC’s volleyball program was just getting started back in those days, and the coach started recruiting basketball players, since the sports were played in different seasons.

Bulthuis never played volleyball in high school, but gave it a try, and suddenly her athletic career was headed in an entirely new direction.

“I played two years at MCC, then I was recruited by Hillsdale and played my final two years there,” she said. “My senior year we made it to the national tournament and made the quarterfinals.”

Bulthuis broke into volleyball coaching with the Grand Haven High School JV team. In 1988 she accepted the varsity coaching job at Spring Lake, and suddenly she was back at her alma-mater for what turned out to be a long stint. 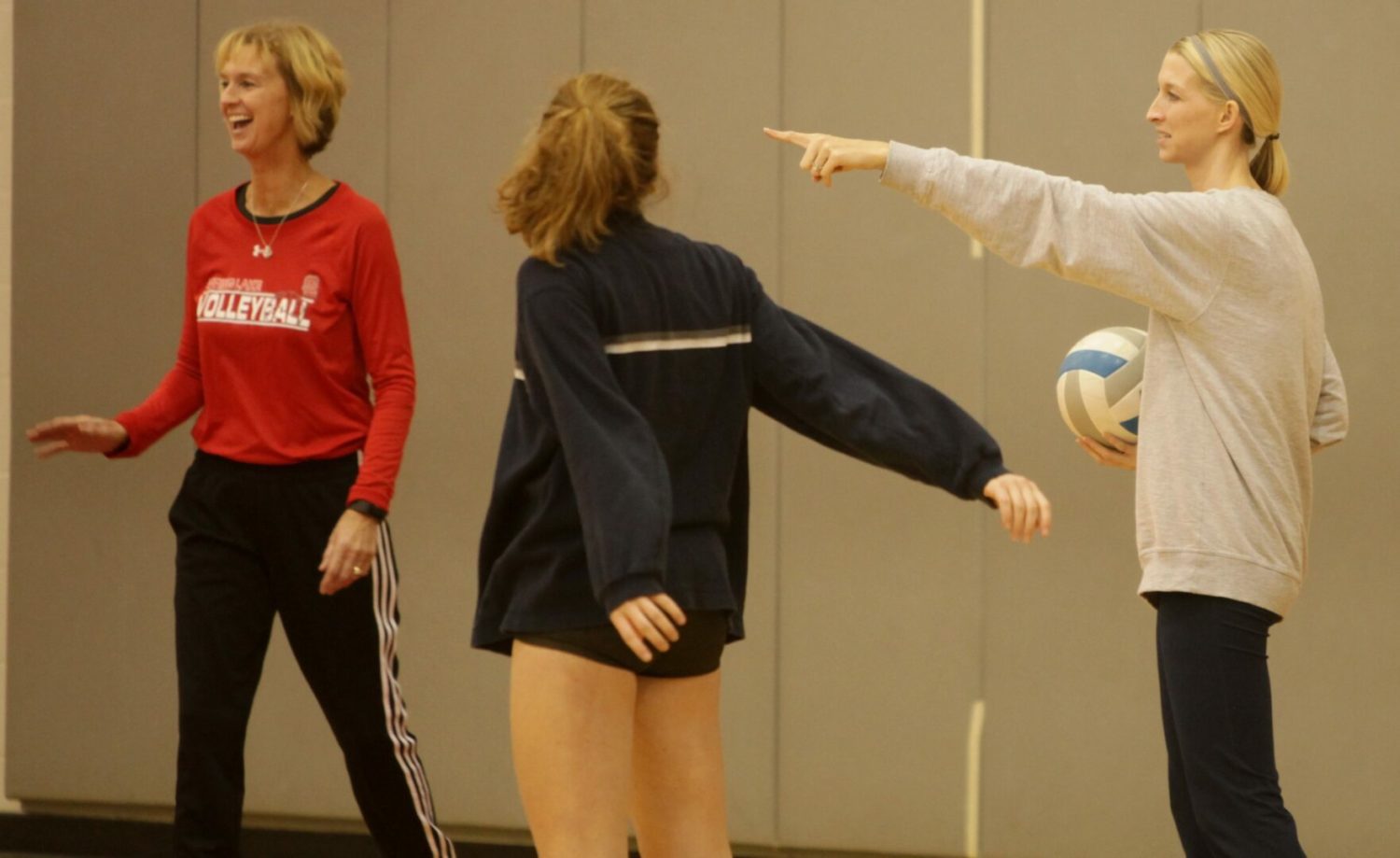 She had her share of success over the next 27 seasons, winning nine conference championships and seven Class B district titles.

She also had the pleasure of coaching her daughters, who both became standouts in the sport. Oldest daughter Betsy went on to play college volleyball at Alma College and is currently an assistant coach at Hudsonville High School. Cassidy played at Hope College.

“My children were raised in a gym,” Bulthuis said with a chuckle. “That’s how they know me.”

Bulthuis’ last district title came in 2013, and at the time she thought that was a perfect way to wrap up her coaching career.

“It’s kind of ironic, but that was one of my best seasons at Spring Lake,” she said about 2013. We won districts, beat Forest Hills Eastern in regionals, the lost to Grand Rapids South Christian in the regional finals. It was the first time we ever got past the first round of regionals.”

But coming back to the bench this fall has been more exciting than Bulthuis ever imagined.

The 2017 season started on a high note for Bulthuis, when she captured her 700th career victory in the NorthPointe Christian Tournament in August.

She also helped the Lakers rebound from a 12-win season last year to a 30-win total this fall, which included a 10-2 conference record and a share of the O-K Blue title with Grand Rapids Catholic.

“I felt like this was a good group,” said Bulthuis. “I knew the returning seniors were going to have some good experience, and the juniors coming up were good players. They seemed to be a fairly talented team. I was really hoping we could compete in the tough conference we’re in. I was pleasantly surprised.”

Lumberjack notes: Daccord named USHL Goaltender of the Week for his performance on opening night