McKenna Hepler was one of those players for the Whitehall volleyball team on Monday night.

The Vikings, champions of the West Michigan Conference, found themselves in life-and-death battle with archrival Montague in the first round of the Class B district tournament at Fruitport High School.

The match was tied 2-2, and it all came down to a decisive fifth set. 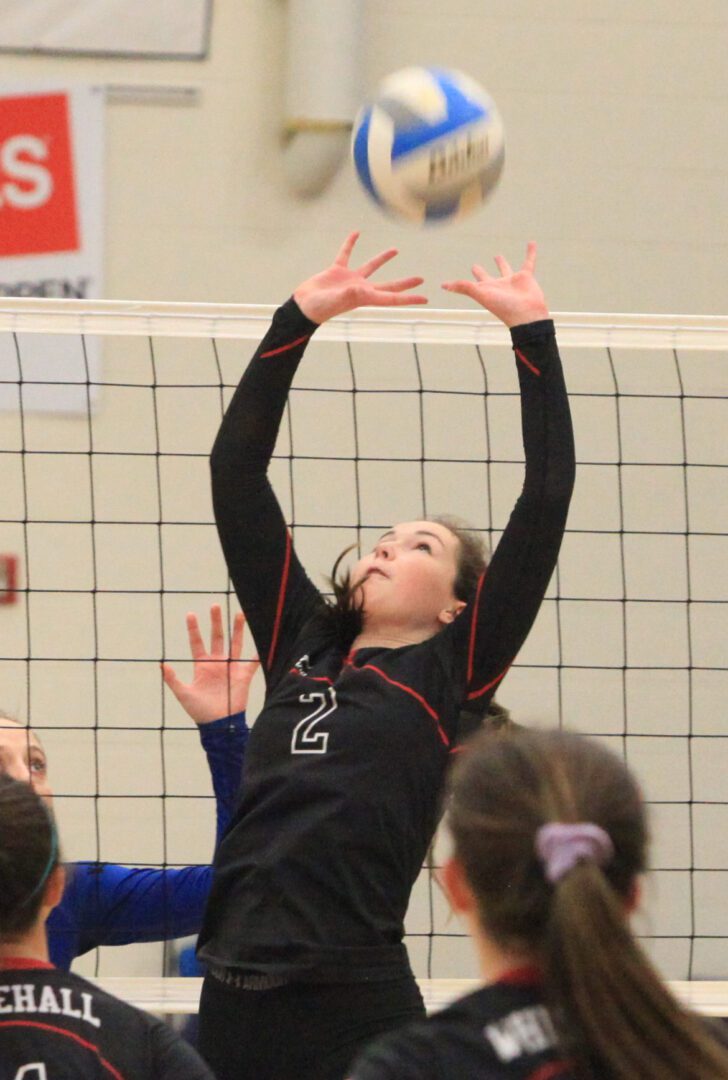 Jaden Mikkelson on the Whitehall set at the net. Photo/Jason Goorman

That’s when Hepler got hot, coming up with two big kills down the stretch to help the Vikings win the set 15-10 and pull out an exciting 3-2 victory over the Wildcats.

Whitehall, 28-14-3 on the season, now advances to Wednesday’s semifinal round against Oakridge.

“She’s a smaller outside hitter who’s really on the court to be a passer and back court player, but she took some big swings and got some big kills when it mattered,” said Whitehall Coach Ted Edsall about Hepler.

Early on it looked like Whitehall would be lucky to make it to a fifth set. After playing to an early 6-6 tie in the first set, the Vikings watched Montague pull away for a surprisingly easy 25-13 win.

Montague has six service aces in the first set – two apice by Alyssa Bobian and Morgan Roesler and one each by Madelyn Wynn and Allison Hall.

Montague threatened to run away with the match by pulling out to a 16-11 lead in the second set, but Whitehall came roaring back to win 25-19, then broke open a 9-9 tie and won the third set 25-18.

Montague rebounded with a 25-17 win in the fourth set, setting up the fifth and final set, with the winner advancing and the loser packing it in for the season. 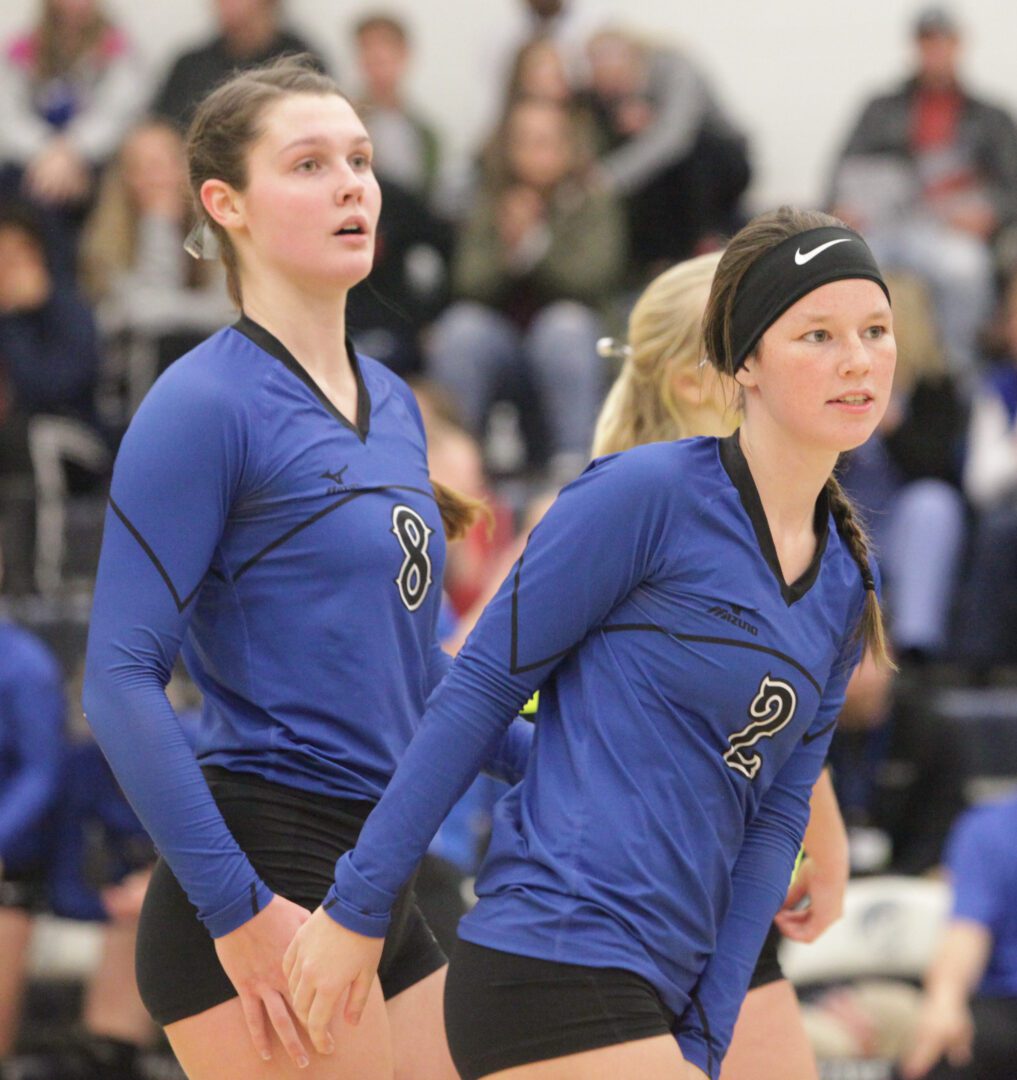 Montague’s No. 8 Alyssa Bobian and No. 2 Madelyn Wynn wait for the next play. Photo/Jason Goorman

The teams played to an 8-8 tie, Whitehall pulled ahead by one, then Abby Seeger served four straight points to put the Vikings in command 13-8.

Hepler had her two big kills down the final stretch, one that gave Whitehall an 11-8 lead, and another that put the Vikings on the edge of victory with a 14-10 advantage.

“Abby Seeger got a bunch of serves in,” Edsall said. “She also made some really good passes. She struggled with her passing most of the night, but made three or four perfect passes at the end.

“I told our team (after the bad first set) that it was going to happen,” Edsall said. “I told them we’re never going to kill this team, because they are very good. We just fought very hard and had some players make some big plays. I don’t think we played outstanding, but that’s hard to do in rivalry games.”

Seeger led the Vikings with 14 kills while Allisyn Grams had 13. Katelyn Goodrich had 30 assists, Gianna Megna had 14 digs and Hepler served four aces.

Montague Coach Shawn Bectel gave credit for the Vikings for battling back, but said his team could have played better.

“We played clean that first set, but I thought we got a little sloppy at times and went away from our game plan after that,” said Bectel, whose team finished the season with a 42-17-1 record.. “I just felt we left a lot out there, but unfortunately that’s how volleyball goes sometimes.”

Bobian led the Wildcats with 22 kills and five aces. Summer Garwood had 50 assists and Morgan Roesler had 32 digs. 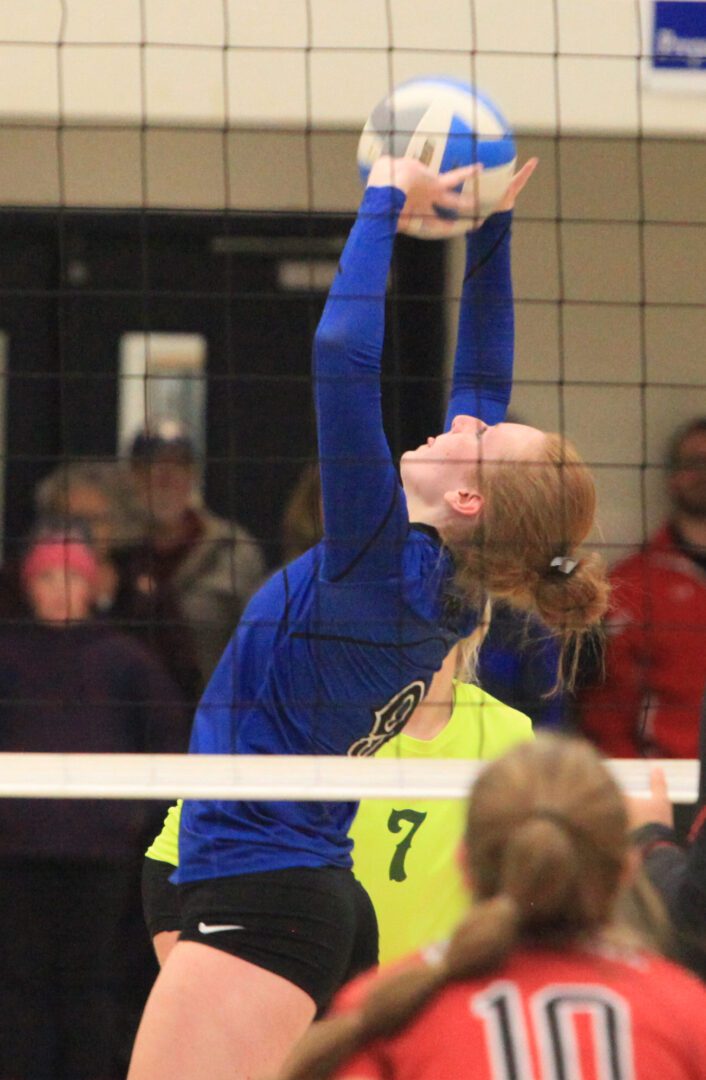 Montague’s Summer Garwood gets ready to set up a teammate at the net. Photo/Jason Goorman 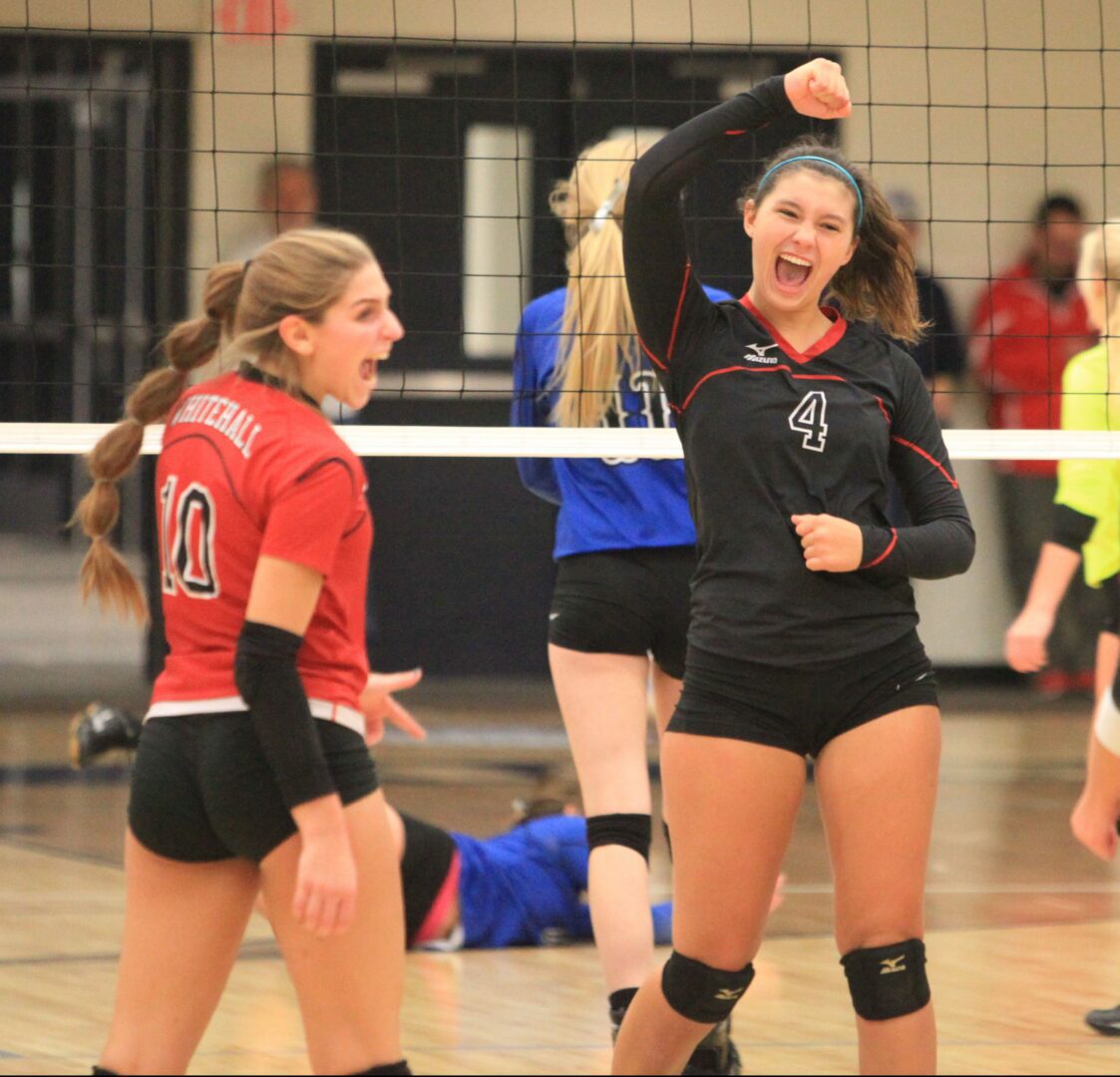 Whitehall’s No. 4 Clara Moore and No. 10 Gianna Megan react after the Viking point. Photo/Jason Goorman 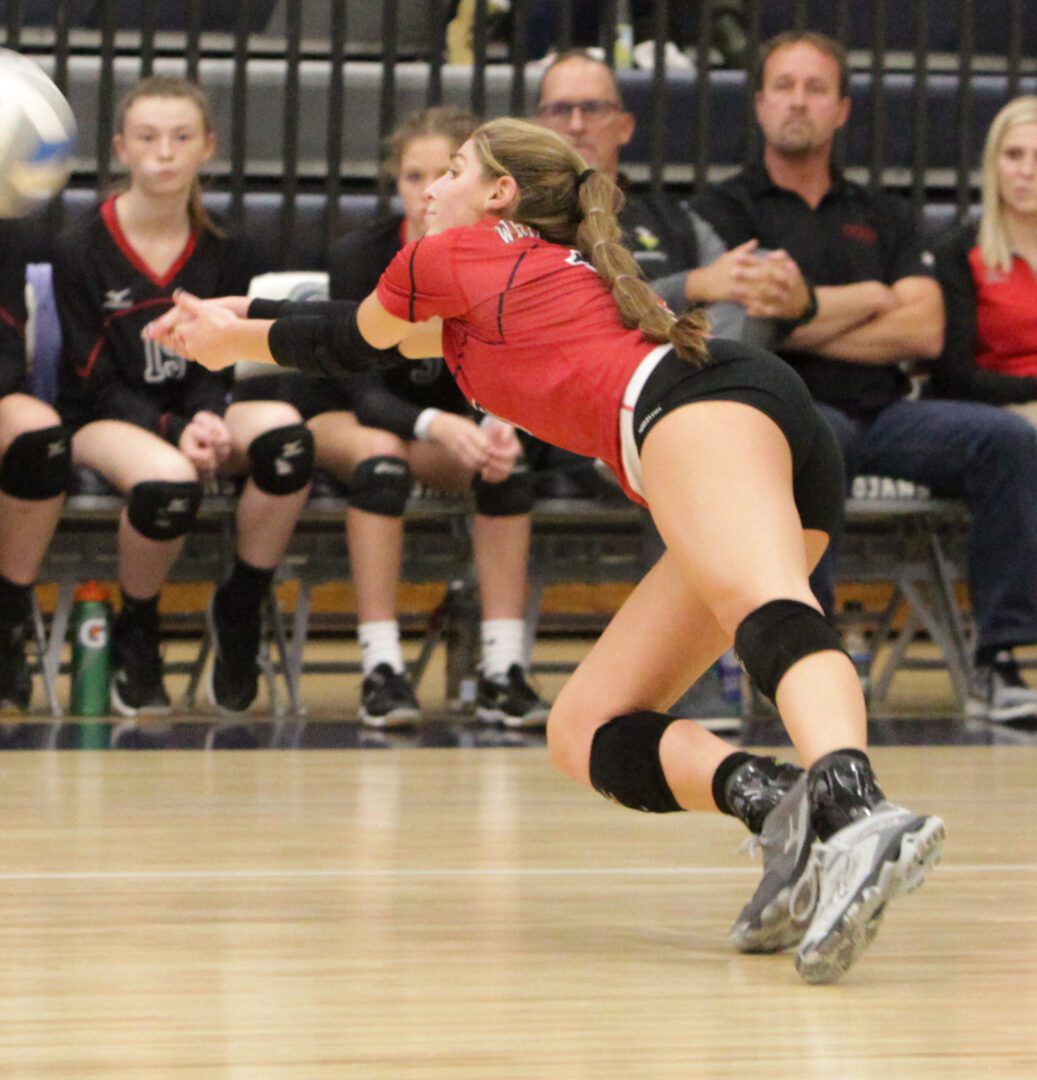 Gianna Megan gets the dig for Whitehall. Photo/Jason Goorman 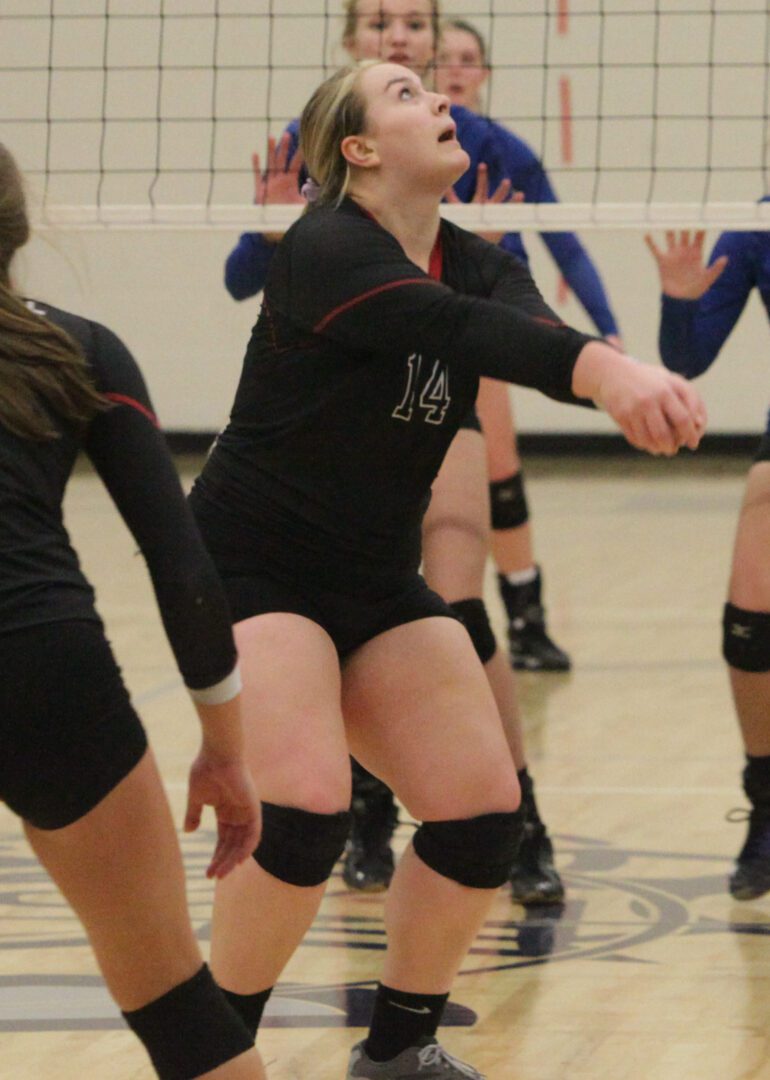 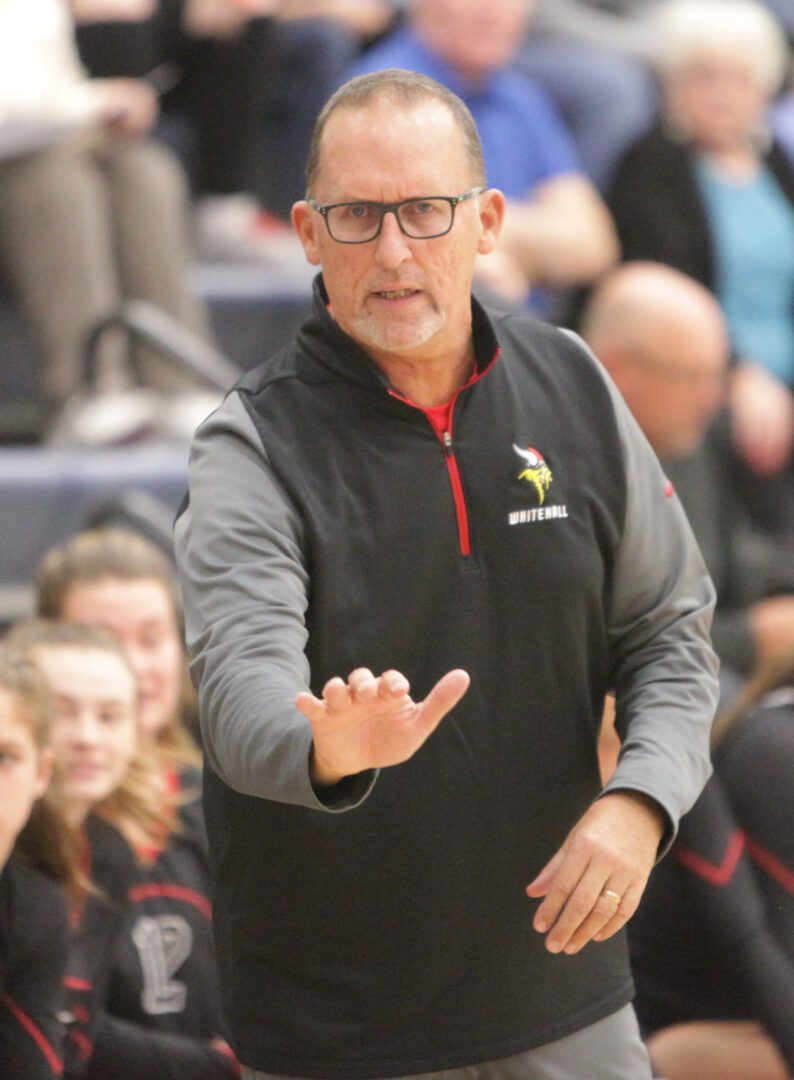 Whitehall coach Ted Edsall gives instruction to his players during a break in the action. Photo/Jason Goorman 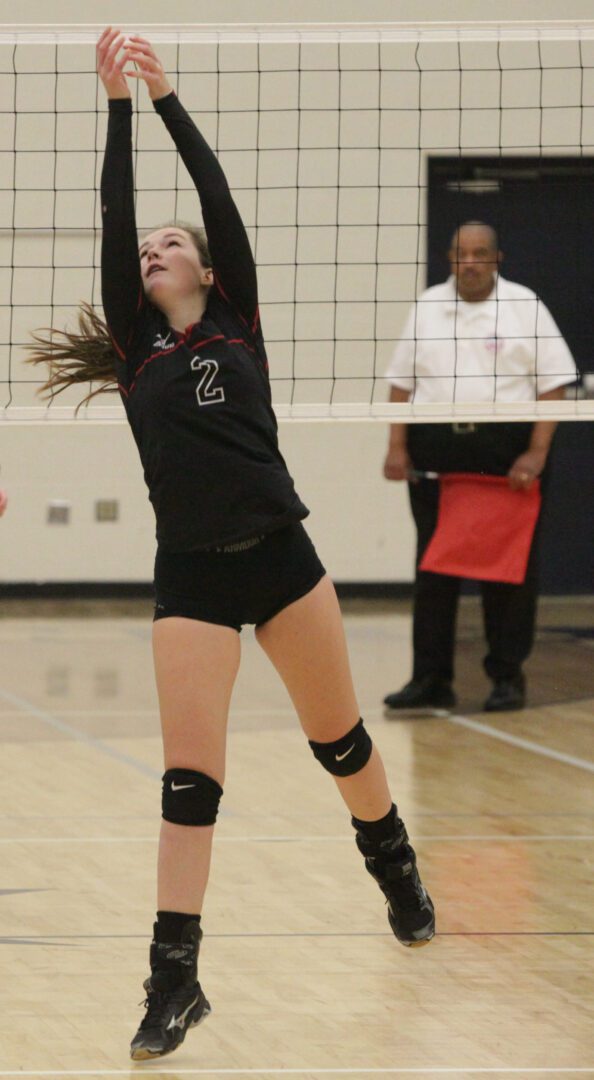 Whitehall’s No. 2 Jaden Mikkelson on the bump. Photo/Jason Goorman 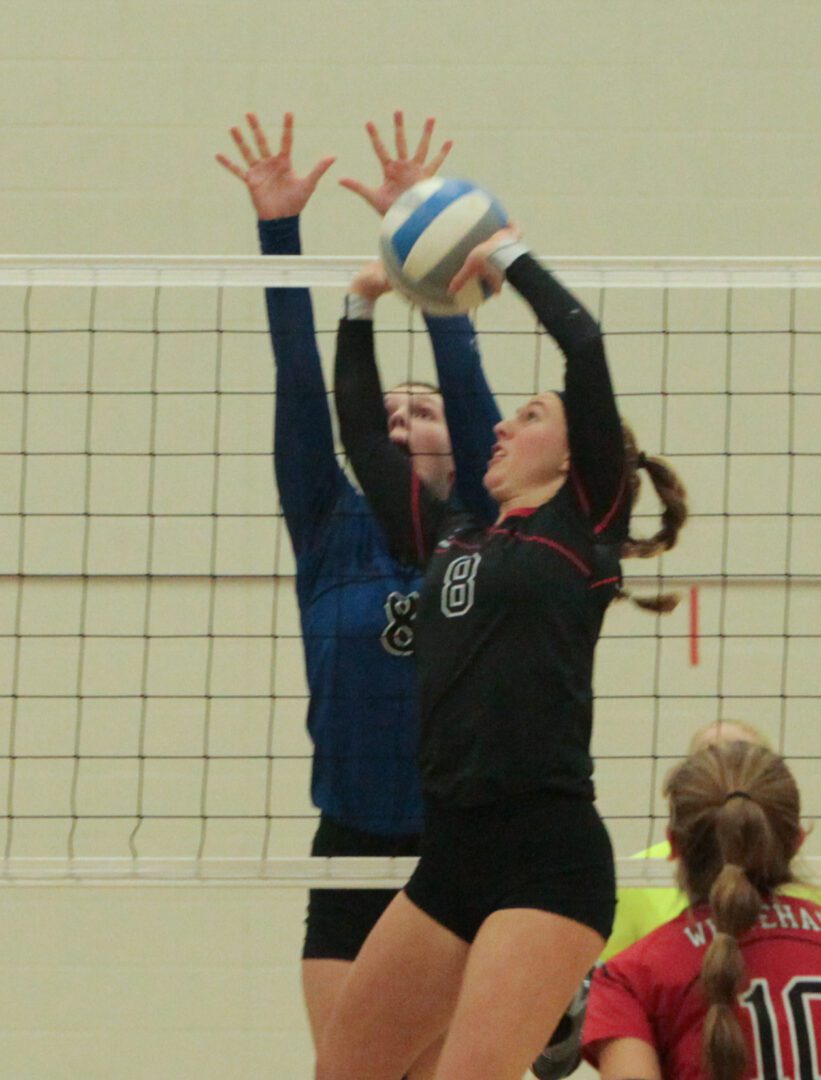 Whitehall’s No. 8 Katelyn Goodrich sets the ball while Montague’s No. 8 Alyssa Bobian plays at the net. Photo/Jason Goorman