MUSKEGON – It was tougher than expected, but the Western Michigan Christian boys soccer team advanced to the Division 4 district championship

game with a win over North Muskegon on Wednesday.

The Warriors beat the Norse 8-2 just three weeks ago, but ran into a much different team in the semifinals.

But WMC, now 19-2 and ranked third in the state, used just enough offense and some stingy defense to escape with a 3-0 victory. which avenged a loss to North Muskegon in last year’s district semifinals.

The Warriors will now face their biggest challenge to date, hosting Grand Rapids NorthPointe Christian, the top-ranked team in the state, in Friday’s district title game at 6:45 p.m. 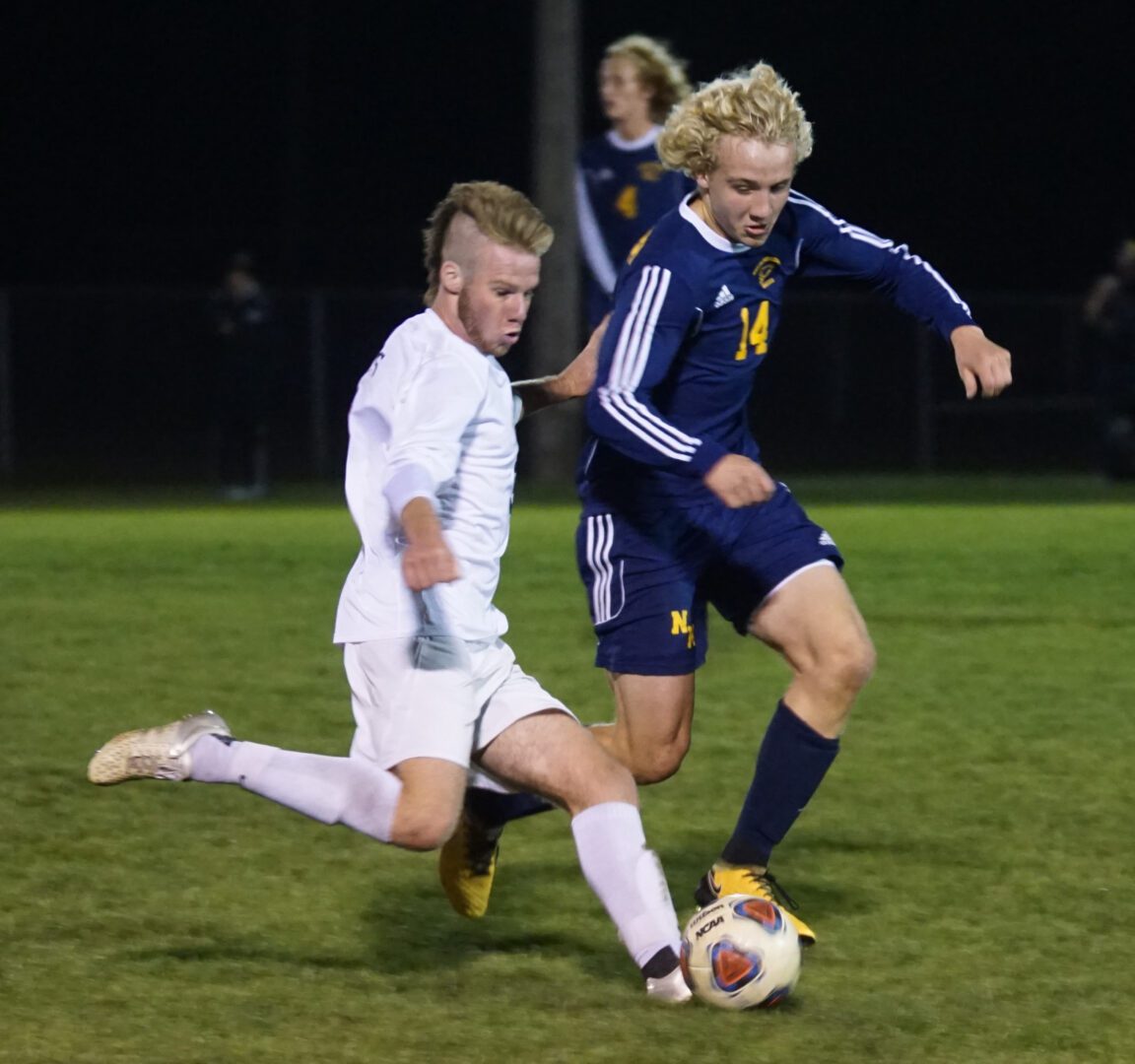 Tyler VanBeek goes for the kick in front of North Muskegon’s No. 14 Ryan Kinahan. Photo/Leo Valdez

“I told the team all day that North Muskegon wasn’t going to be the same team we played the first time,” said WMC captain Evan Fles. “This is a rivalry and this is the playoffs.”

North Muskegon’s defense kept WMC out of the offensive end for the first eight minutes of the first half, and after that, the Warriors were held at bay by Norse goalie Nick Gerstweiler.

Gerstweiler stopped six shots as WMC began to apply more and more pressure. The Warriors finally broke through on an Evan Fles goal with nine minutes left in the first half, and led 1-0 at the break.

That lone goal would have been enough to secure the victory, because the WMC defense did not allow the Norse a shot anywhere near the net in the second half.

“We gave up four goals a couple of Fridays ago, and our defense had gotten into some bad habits,” said WMC coach Dave Hulings. “We made it our focus to be better organized on defense.” 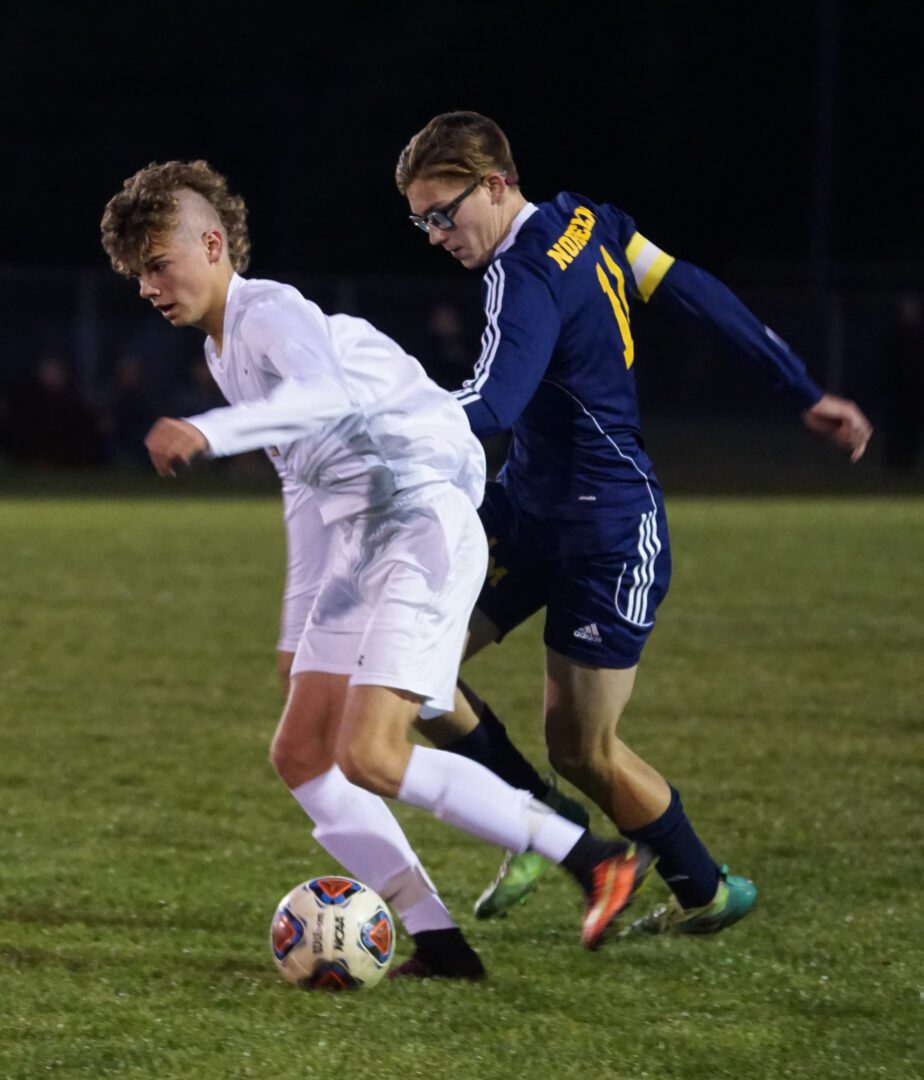 Charlie Alfree tries to keep control with Norse forward Dylan Hoffman on his back. Photo/Leo Valdez

Clinging to the one-goal advantage, the Warriors got some breathing room with 7:40 left in the game when Evan Fles knocked in a pass from Tyler VanBeek to increase the lead to 2-0.

Five minutes later, Evan Fles found his younger brother, Brandon Fles, with a corner kick, and the younger Fles headed the ball into the goal for a 3-0 lead.

Western Michigan Christian finished with a 14-2 shot advantage over the Norse.

“We came out here three weeks ago and got embarrassed,” said North Muskegon coach Jeremy Tjapkes. “I challenged the guys and told them if (WMC) is going to beat us, they are going to have to earn it. I’m super proud of the guys, they stood and fought.”

North Muskegon finished the season with a 9-9-1 record. 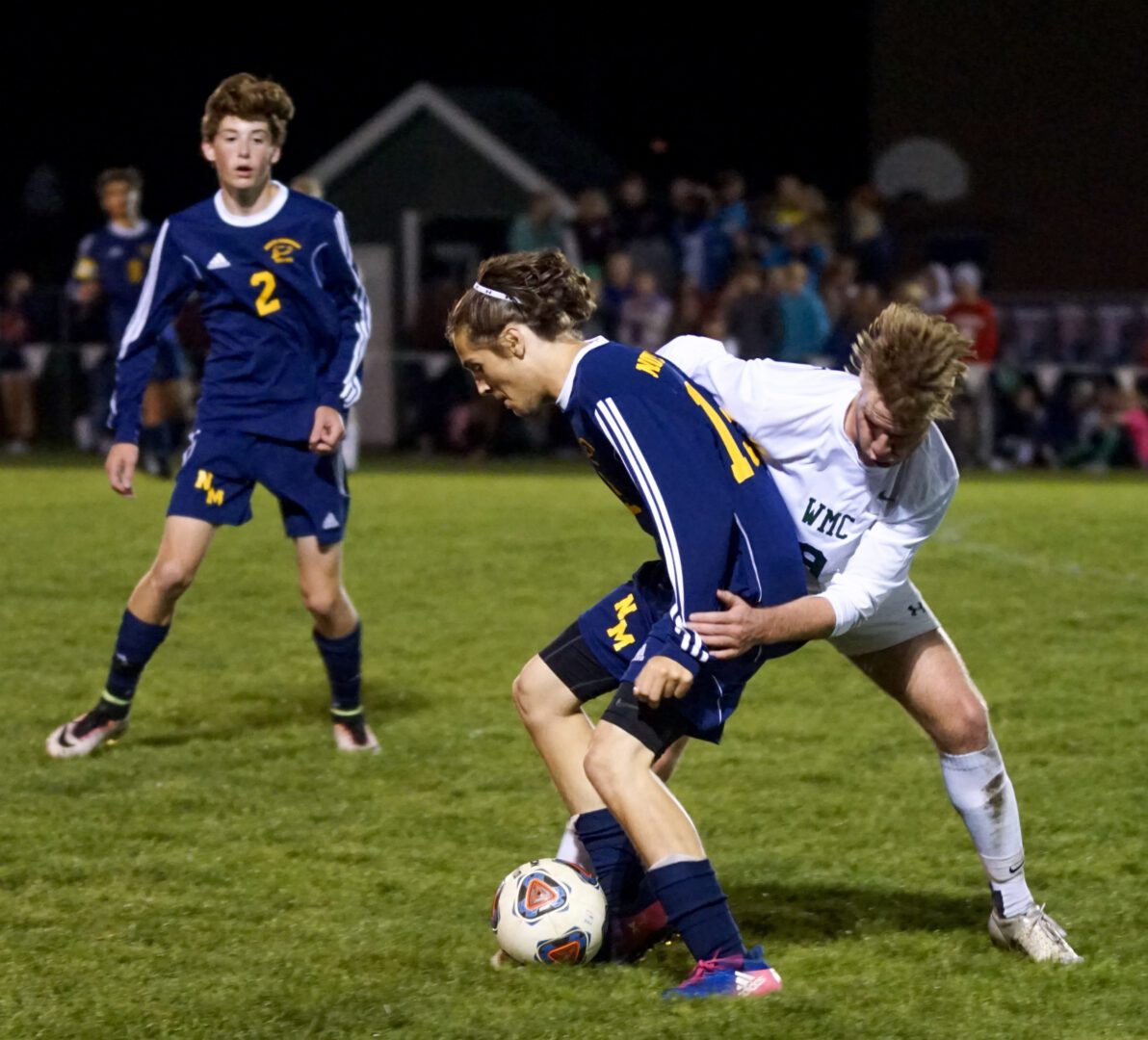 North Muskegon’s Matt Kraley tries to keep control of the possession as WMC’s Tyler VanBeek tries to make the steal while the Norse’ No. 2 Chad Hildwein watches. Photo/Leo Valdez 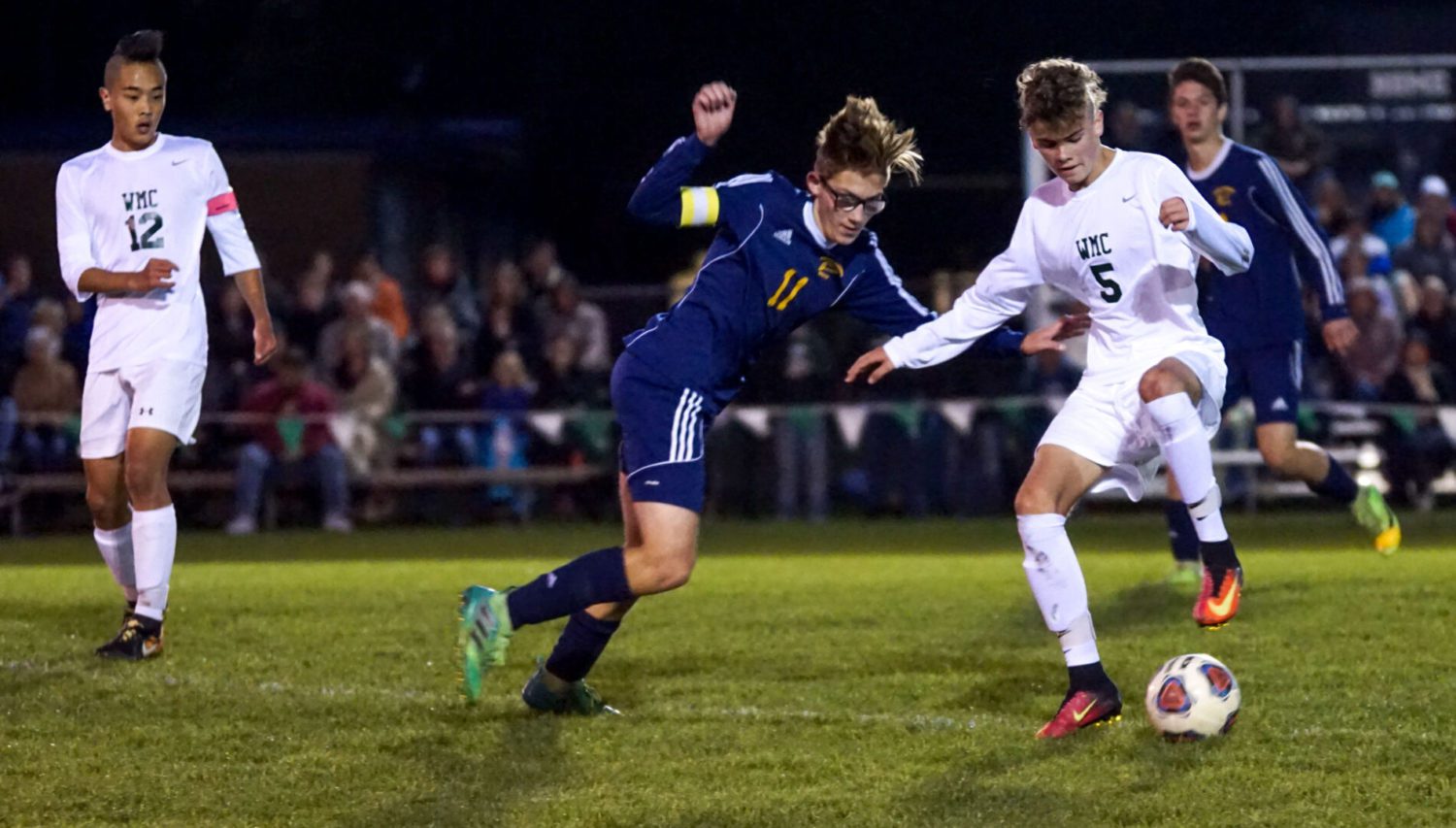 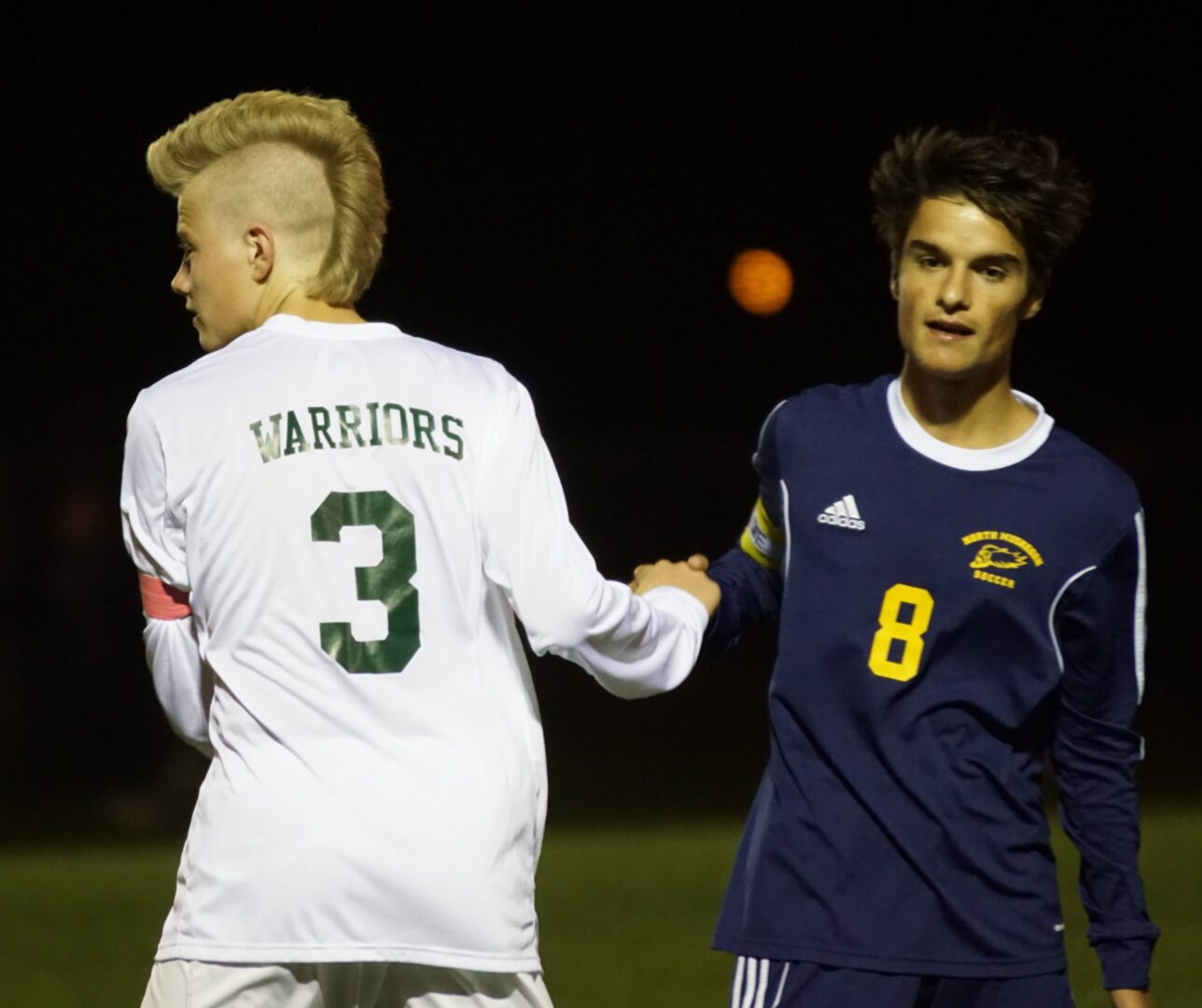 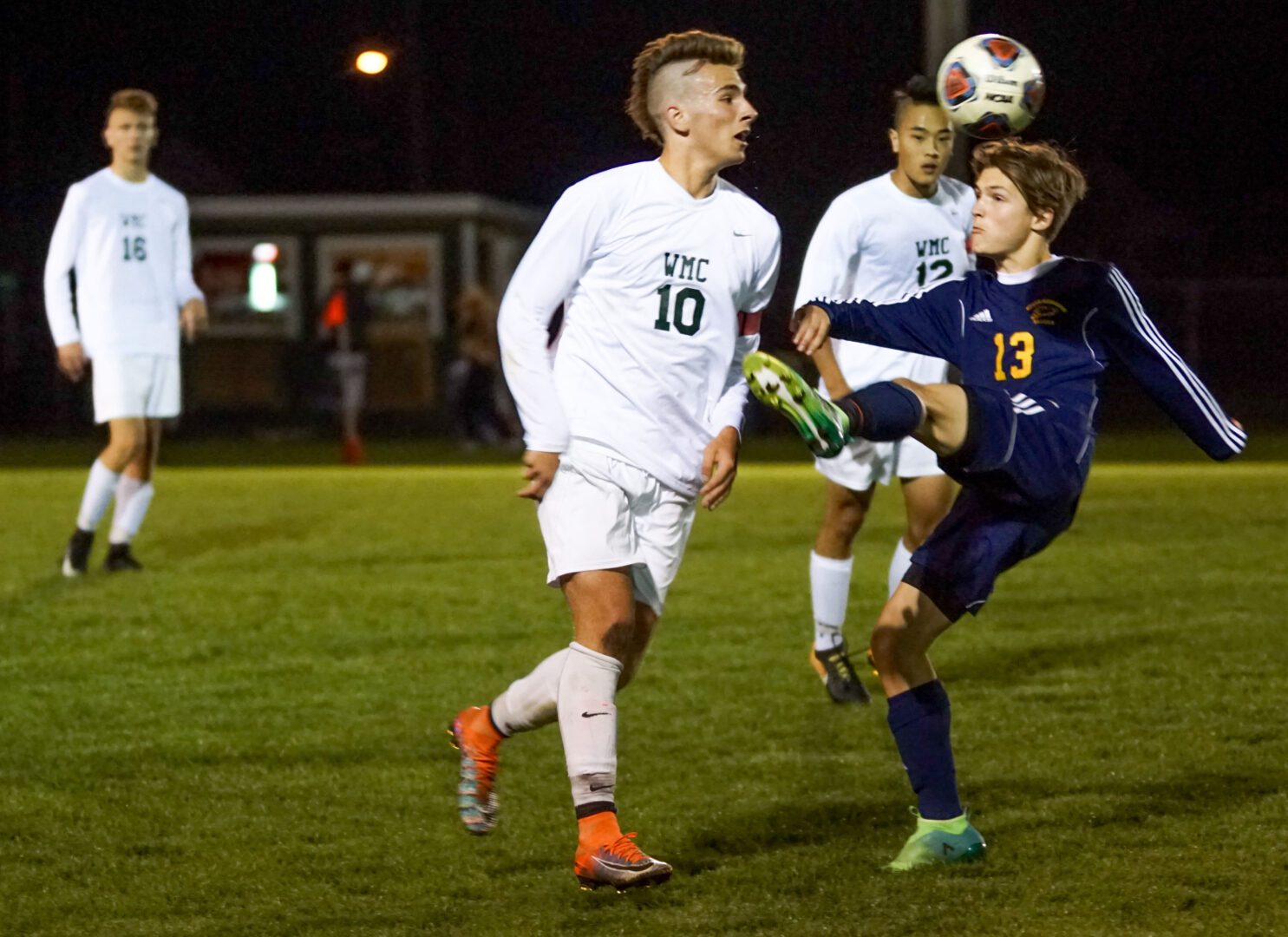 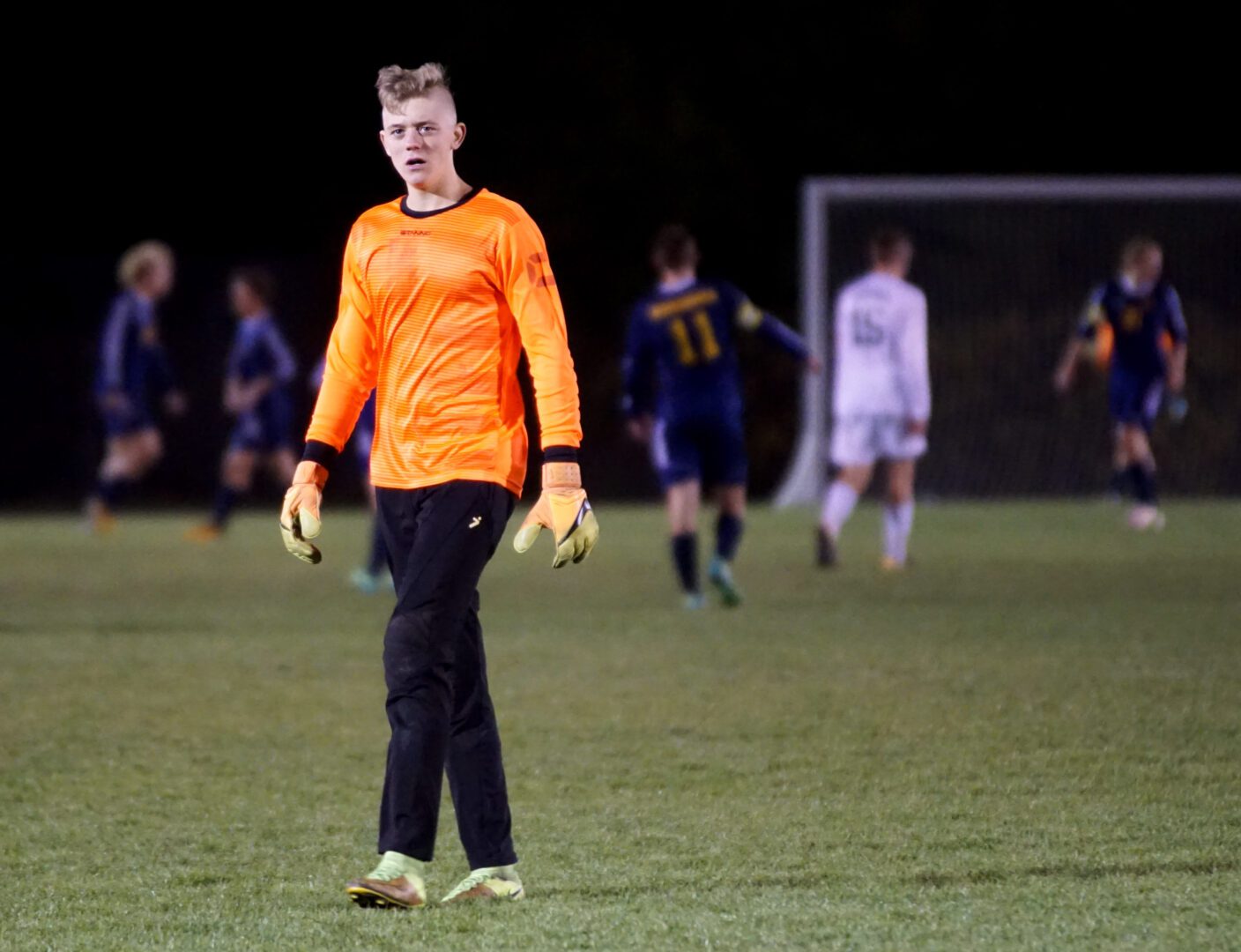 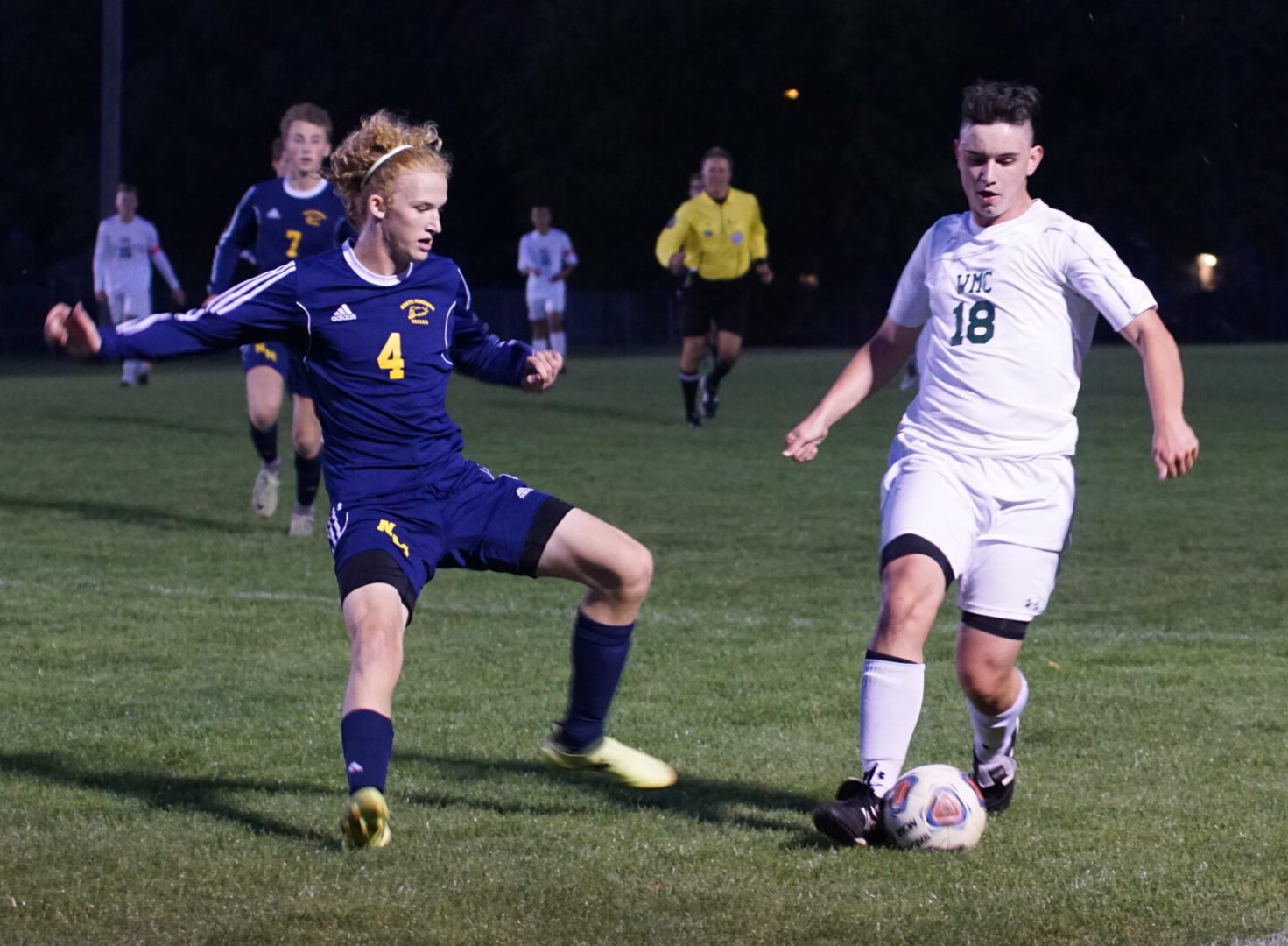