NORTON SHORES – The Western Michigan Christian boys soccer team has had a lot of success over the years, winning six state

This would be the ideal year for the Warriors to reclaim their state glory, since it’s the 50th season of WMC’s boys soccer program.

Optimism is certainly high at WMC headed into the Division 4 state tournament, which begins with district play on Monday.

WMC just wrapped up a great regular season with a 17-2 overall record. The Warriors also finished 8-0 in league play and won the Lakes 8 Conference title.

One of the main reasons the Warriors think they can go a long way in the postseason is the play of senior forward and team captain Evan Fles, who scorched the opposition with 24 goals and 13 assists in the regular season. WMC’s Evan Fles makes a move to the outside during the Warriors’ game against Ludington earlier this season. Photo/Jason Goorman

Those kind of offensive statistics have been drawing Fles high praise all season, but he’s more concerned with victories, particularly now that his final chance to win a state championship has arrived.

“I’m in it for the team,” said Fles, whose team will begin district play on Monday against Muskegon Catholic at home at 6 p.m. “I’ve come up short all three years in terms of a state championship. I don’t really want that again.”

WMC head coach David Hulings says that kind of unselfish leadership from Fles has been a huge plus for his team.

“He’s led these guys since the spring,” Hulings said. “It’s really powerful. I’ve had good players on the field who can’t lead at all. I’ve had people who have been great examples but not really good players. The combination of having those two things together in one player is huge.

“He attacks and defends with equal passion. That’s not always true for attackers. He works hard. He likes it when other guys mark him, because he outworks them. Late in games it’s hard for other teams to keep up with us, and that allows Evan to do what he does.” 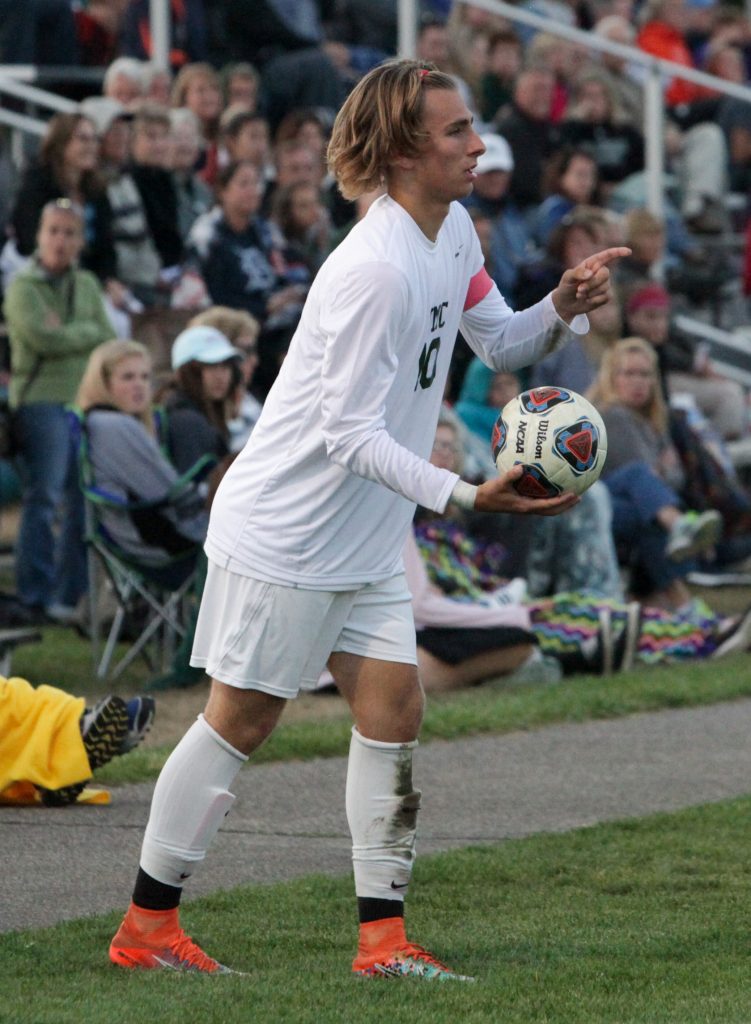 Fles points to a teammate just before a throw in for WMC. Photo/Jason Goorman

In a recent game against Ludington, Fles lit up the scoreboard with five goals. But he says his heavy goal production is only the final product of a process that depends heavily in his teammates.

“I have my teammates helping me out every day, just giving me great balls,” he said. “I’m on a roll with finishing, but it helps having such a great team around me.”

Fles is not the first member of his family to play at WMC, and he won’t be the last, either.

His dad, Tom, won a state championship with the Warriors in 1995 and his brother, Brandon, is a sophomore on this year’s team.

Fles says his dad’s success at WMC is a motivating factor.

“It’s pretty impressive that they (the 1995 team) went undefeated,” he said. “It’s something to try to live up to. It’s pretty cool to have your dad be a part of the whole thing, to have him there each game supporting us, and trying to teach us what they did so long ago when they won the state championship.”

Fles also enjoys playing with his brother, a talented young player in his own right who missed all of last season with an injury.

“It’s really cool to be able to play with my brother for the last year of my high school career,” he said.

While expectations are high for the state tournament, Hulings and Fles know there’s a lot of work to do to live up to the accomplishments of previous WMC teams.

“They understand that they’re a link in the chain and it’s their time to link up,” Hulings said about his players. “The chain goes a long ways back. Every link is tied to the guy before. They understand they’re playing for something much bigger.”

“Our goal is a state championship,” Fles said. “I think we have a really talented team this year. We all back each other every day, we love God, and if we work hard on top of that I think we’ll accomplish our goals.”

Memories of Moyes: Spartans, Terps about to renew its rivalry on the football field