That’s understandable, because the Warriors have claimed six state trophies in their storied 50-year history.

But in recent years, just getting out of districts has been challenging for the Warriors.

Last year WMC and North Muskegon were both ranked in the top five in the state, and the Warriors lost a heartbreaker to the Norse in the district semifinals.

This year the Warriors are ranked third in the state, and advanced to Friday’s district finals, only to find themselves pitted against Grand Rapids NorthPointe Christian, the state’s top-ranked team. 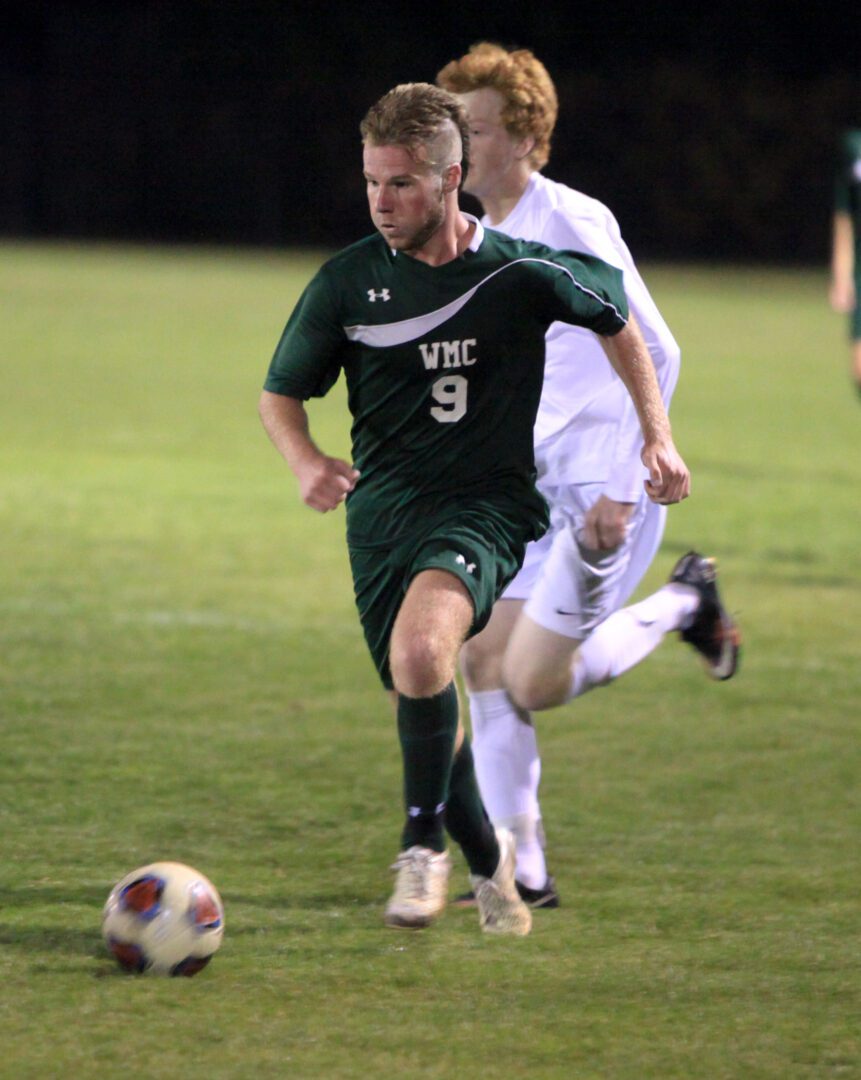 But this time WMC was up to the challenge, beating the mighty Mustangs 2-0 to claim a Division 4 district title in front of hundreds of cheering fans on its home field.

The victory avenged a regular-season loss to NorthPointe Christian and sent WMC, now 20-2 on the season, to the first round of regionals on Tuesday at 5 p.m.

“They beat us earlier in the season 2-1,” said WMC Coach David Hulings. “We were up 1-0 at halftime, just like this time, and they came back in the last 10 minutes and won. You have to beat the best to be the best, and we want to go through whatever we have to go through to be the best.”

“For me personally, that left a really sour taste, and for a bunch of other guys involved in that game,” he said. “We didn’t want to taste that again, especially this early. We came out and did what we had to do. We executed well so we didn’t have to feel that again.”

The game was scoreless until very late in the first half when Fles broke in alone from the left of the NorthPointe goalie and shot the ball past him. 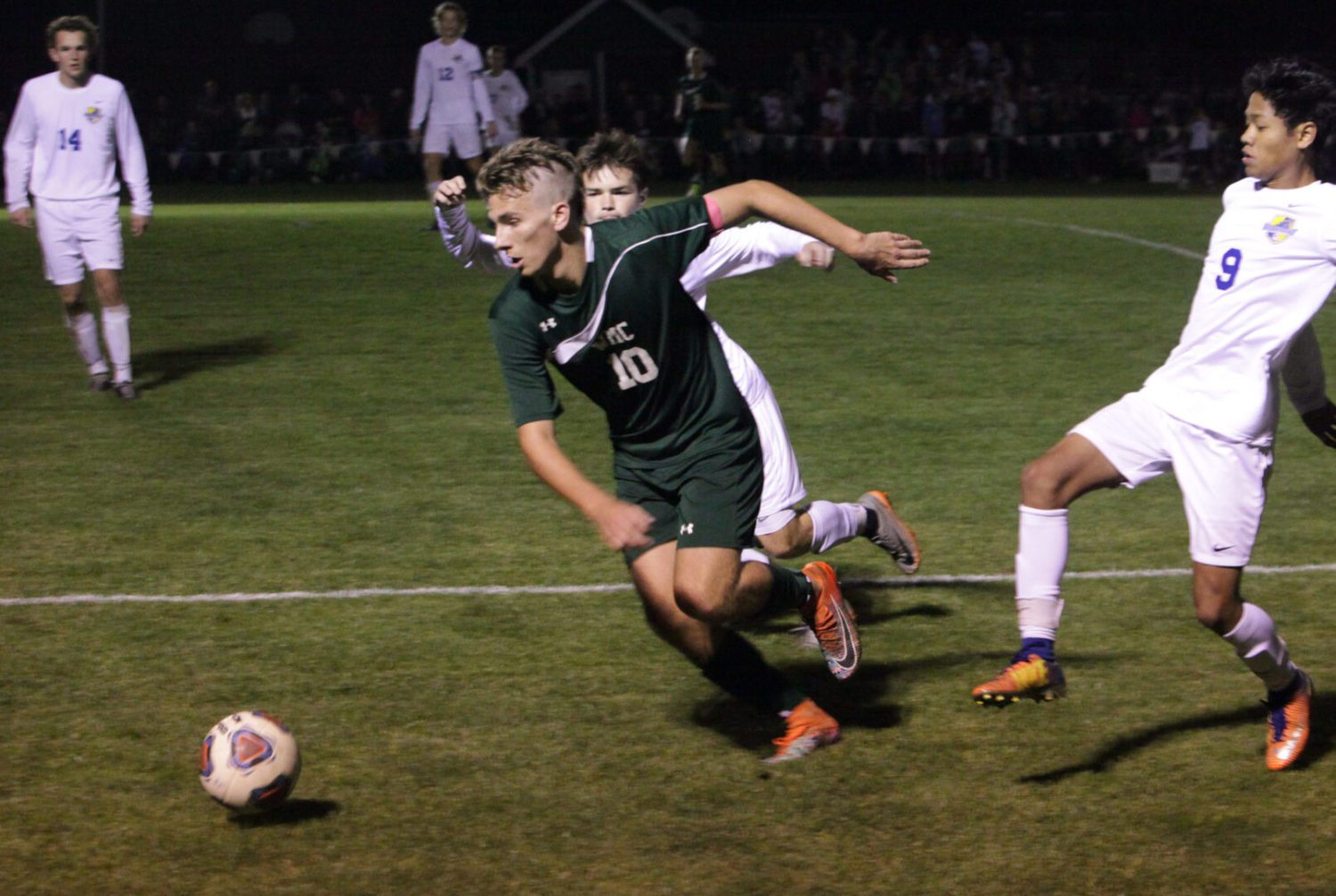 Evan Fles gets past the NorthPointe defense. Photo/Jason Goorman

NorthPointe had a 4-2 advantage in shots in the first half, but was frustrated by WMC goalie Jamieson Gorman.

NorthPointe had a few more scoring opportunities in the second half, but several great stops by Warrior goalie Jake Moser, who replaced Gorman after halftime, kept them off the board.

Moser got some help when a high, hard shot from a NorthPointe player got over his head and struck the crossbar and bounced away.

If the shot had been an inch lower, the game would have been tied.

“Luck, by my definition, is when the sovereignty of God kisses the preparation of man,” a smiling Hulings said about the shot that hit the crossbar.

The issue was finally settled with 7:12 left in the game when a shot from inside the box by senior Johnscott Finley trickled into the NorthPointe goal, giving WMC its final margin of victory.

“Evan (Fles) is a great scorer and finds the net when he needs to, but he got really tired at the end, and we got really lucky because Johnscott, who doesn’t play very much forward, got the second goal playing in Evan’s spot,” Hulings said.

NorthPointe only had three shots on goal in the second half, and had a 7-6 advantage in the game.

Hulings credited his defenders – Brandon Fles, Josh Paquin, Charlie Alfree and Joe Hain – for keeping the potent NorthPointe attackers from mounting any more of a threat. 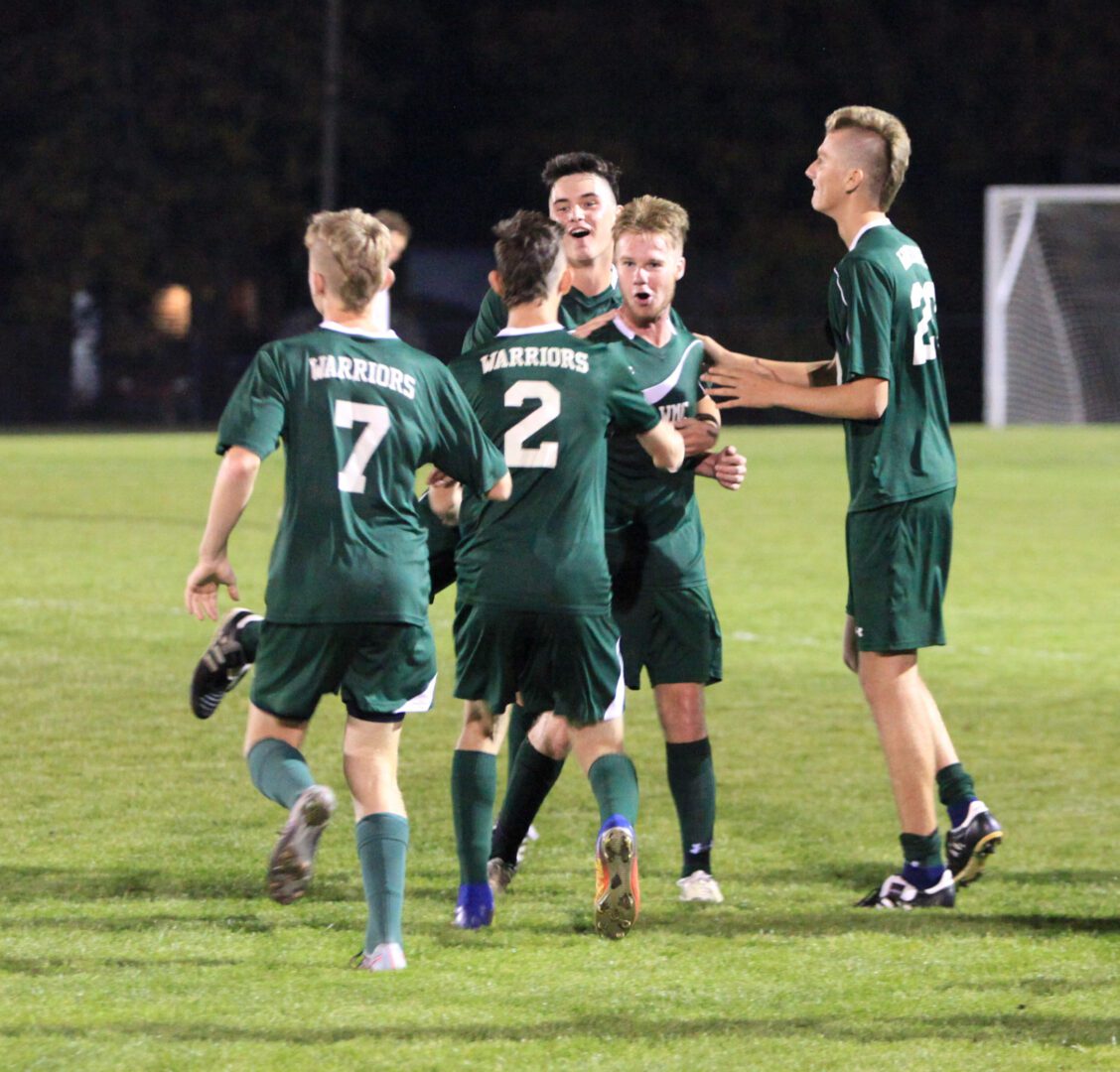 WMC celebrates after the clock runs out for the win over No. 1 NorthPointe Christian. Photo/Jason Goorman 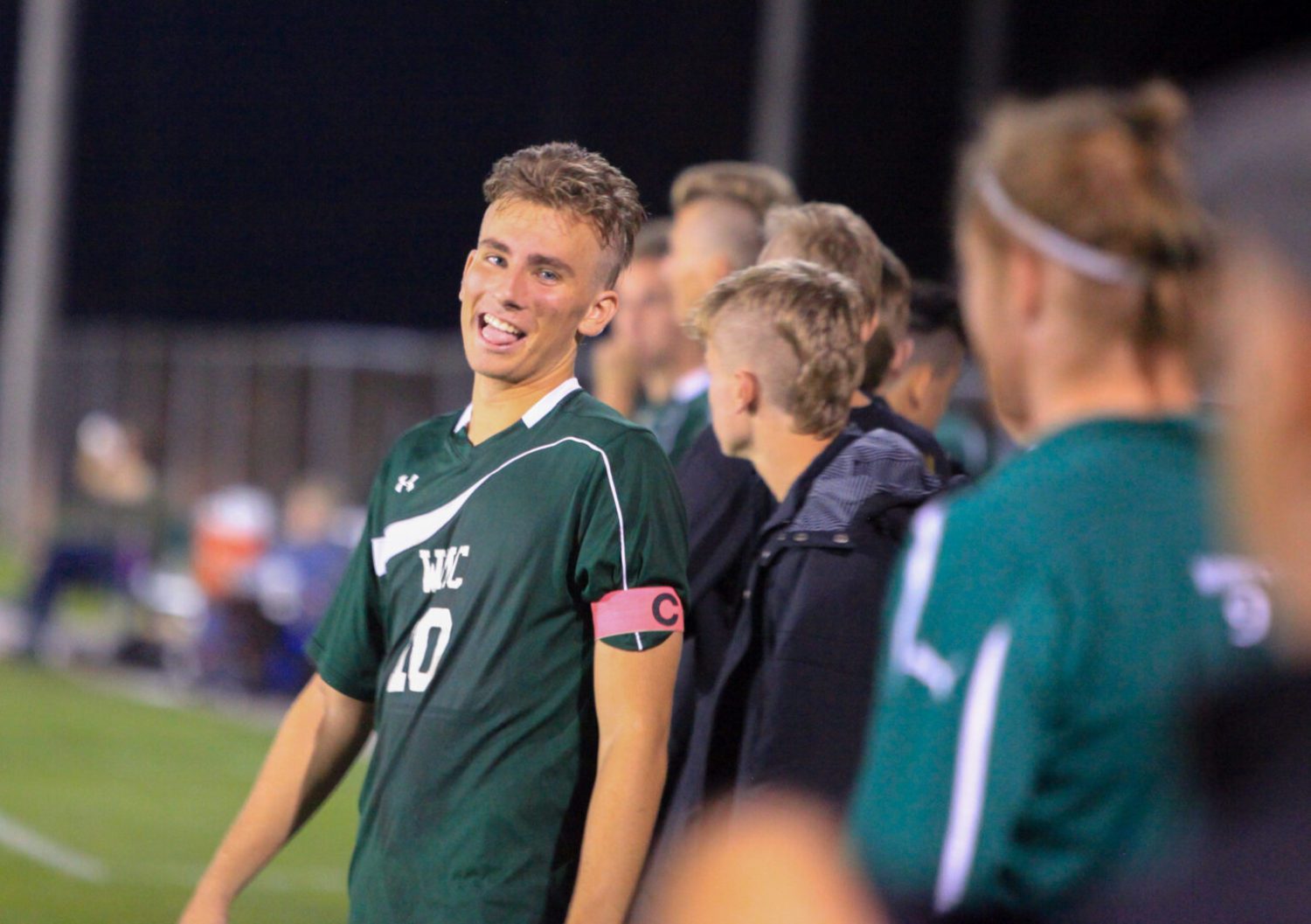 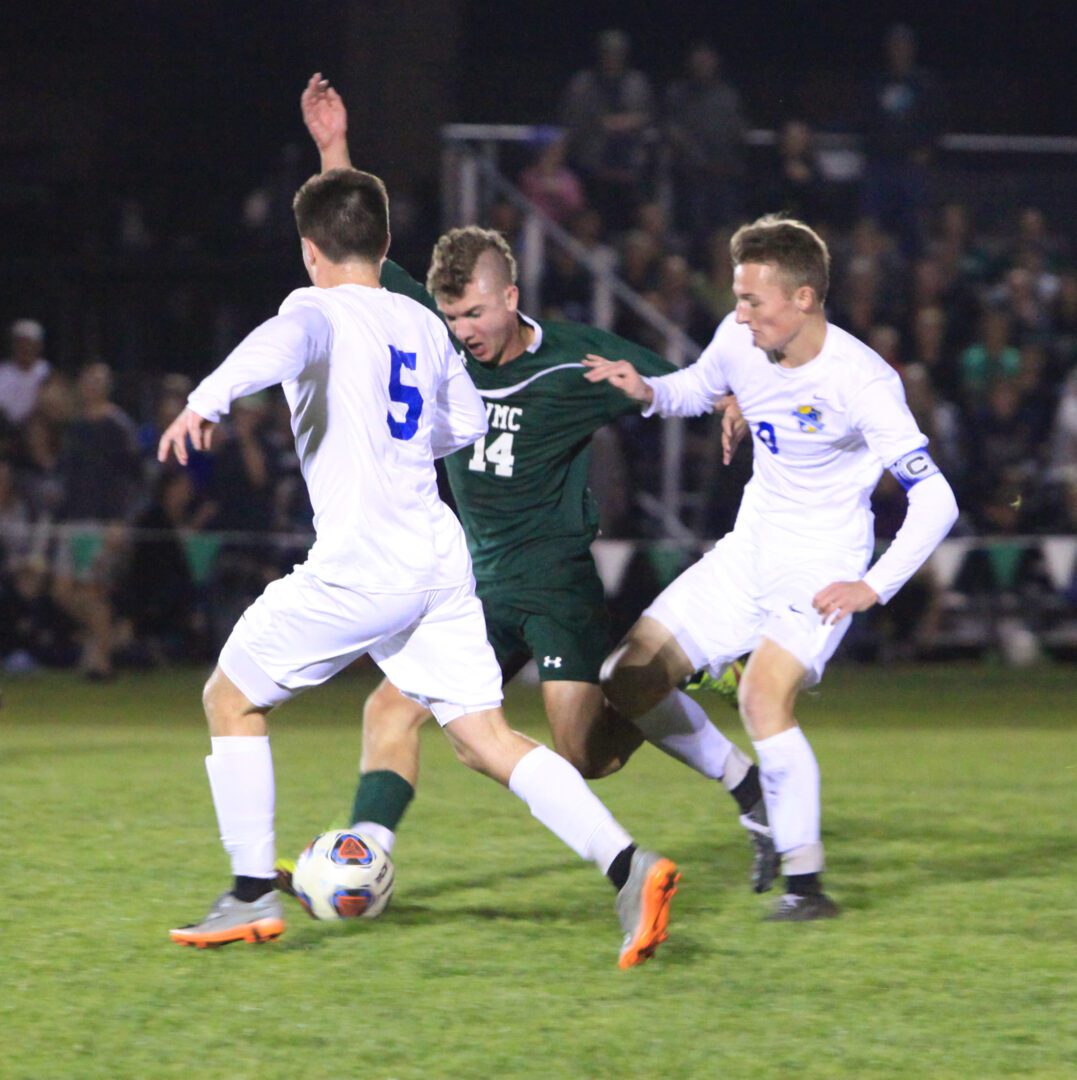 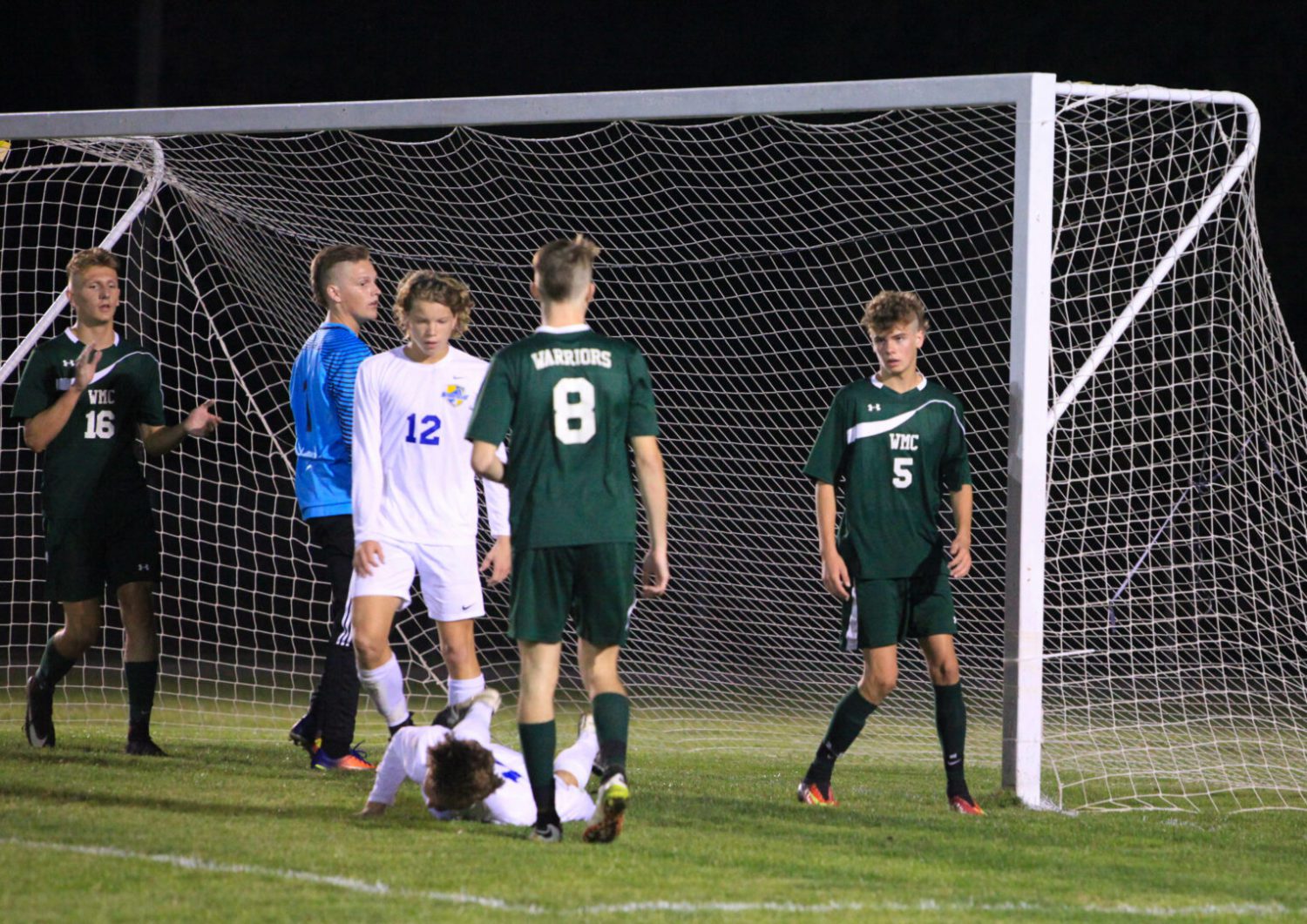 WMC’s No. 5 Charlie Alfree guards the post after a close play on a NorthPointe corner kick. Photo/Jason Goorman

Evan Fles gets past the NorthPointe defense. Photo/Jason Goorman 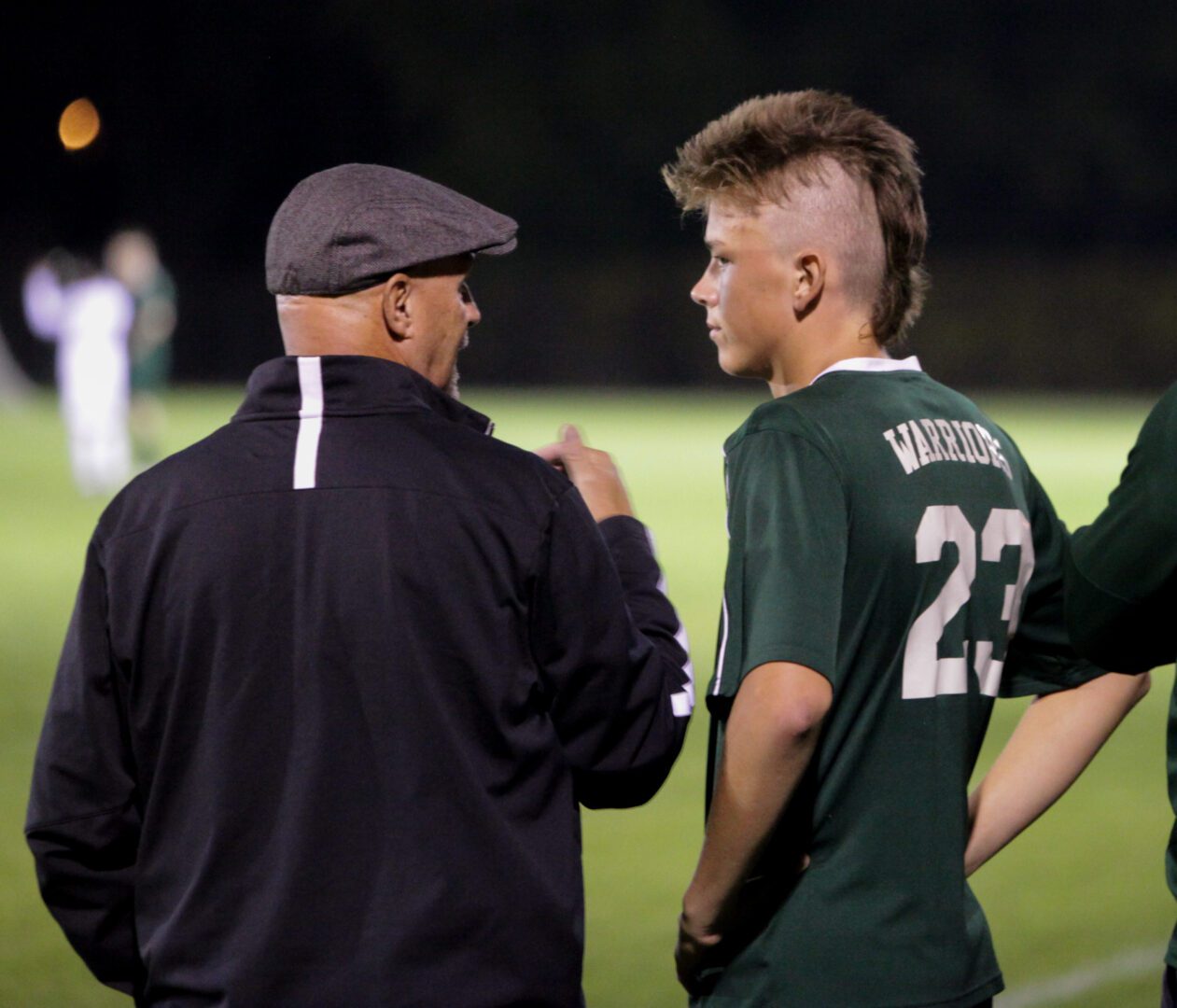 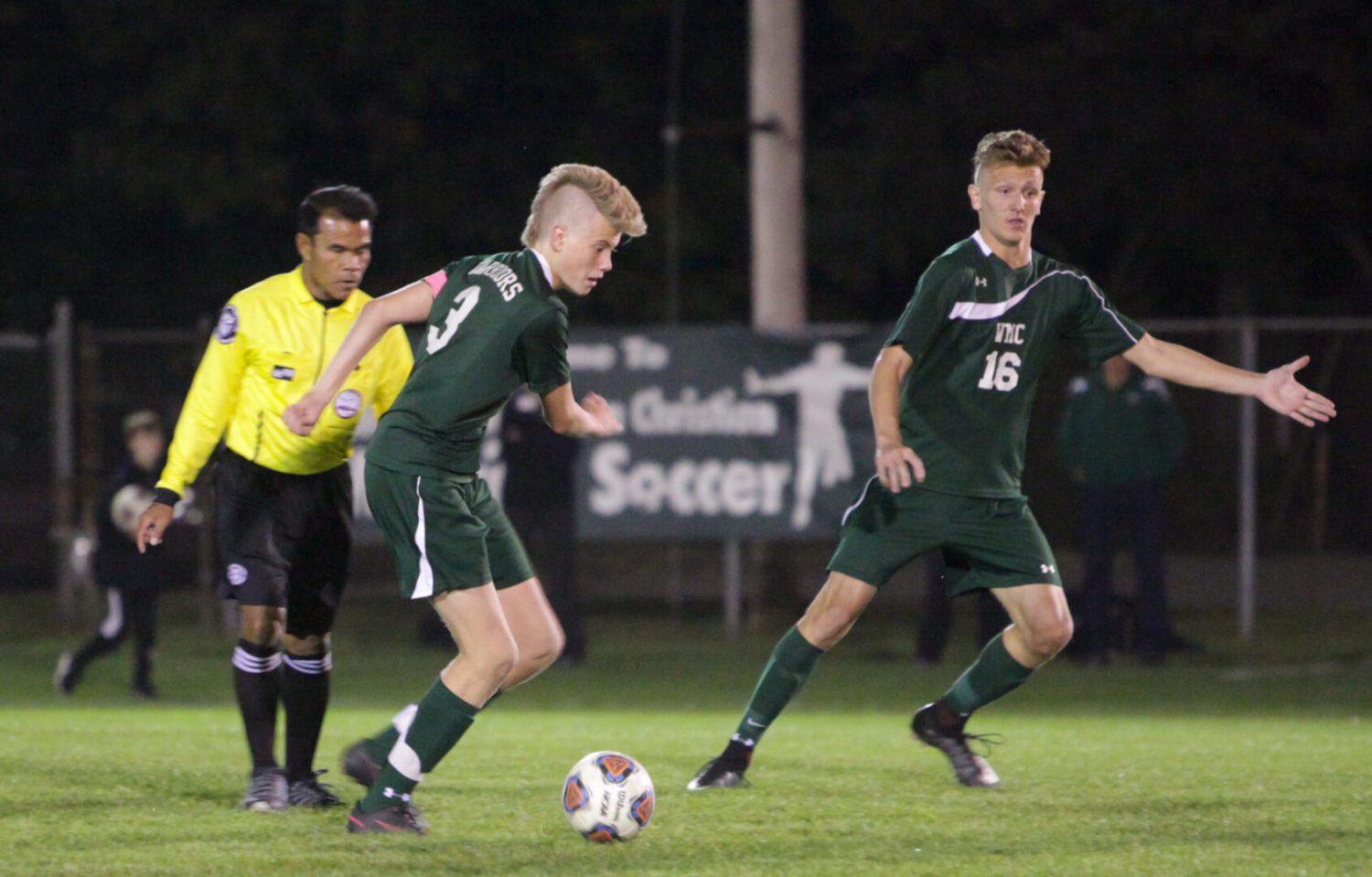 Owen Alfree controls the possession for WMC as No. 16 Brandon Fles calls for the pass. Photo/Jason Goorman 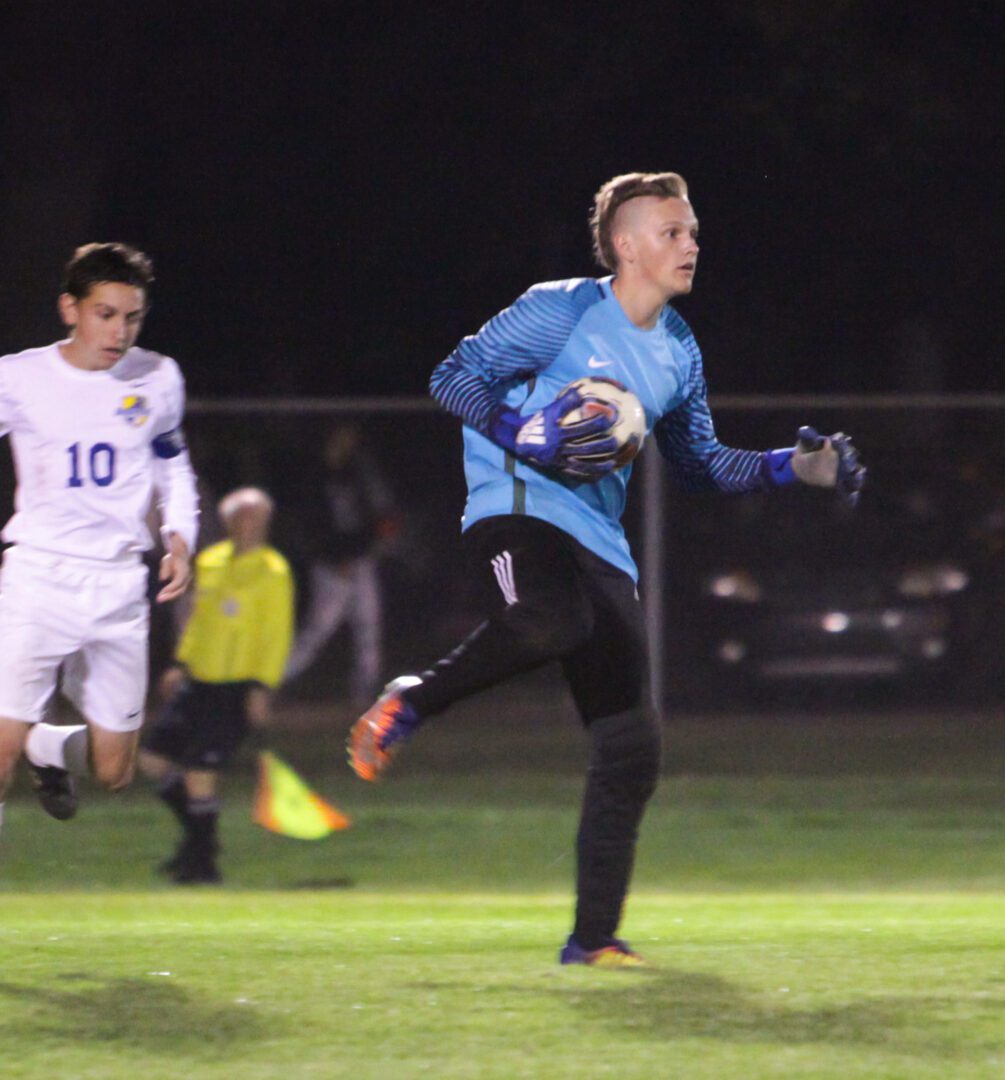 WMC’s second-half goalie Jake Moser makes a save early in the second half. Photo/Jason Goorman 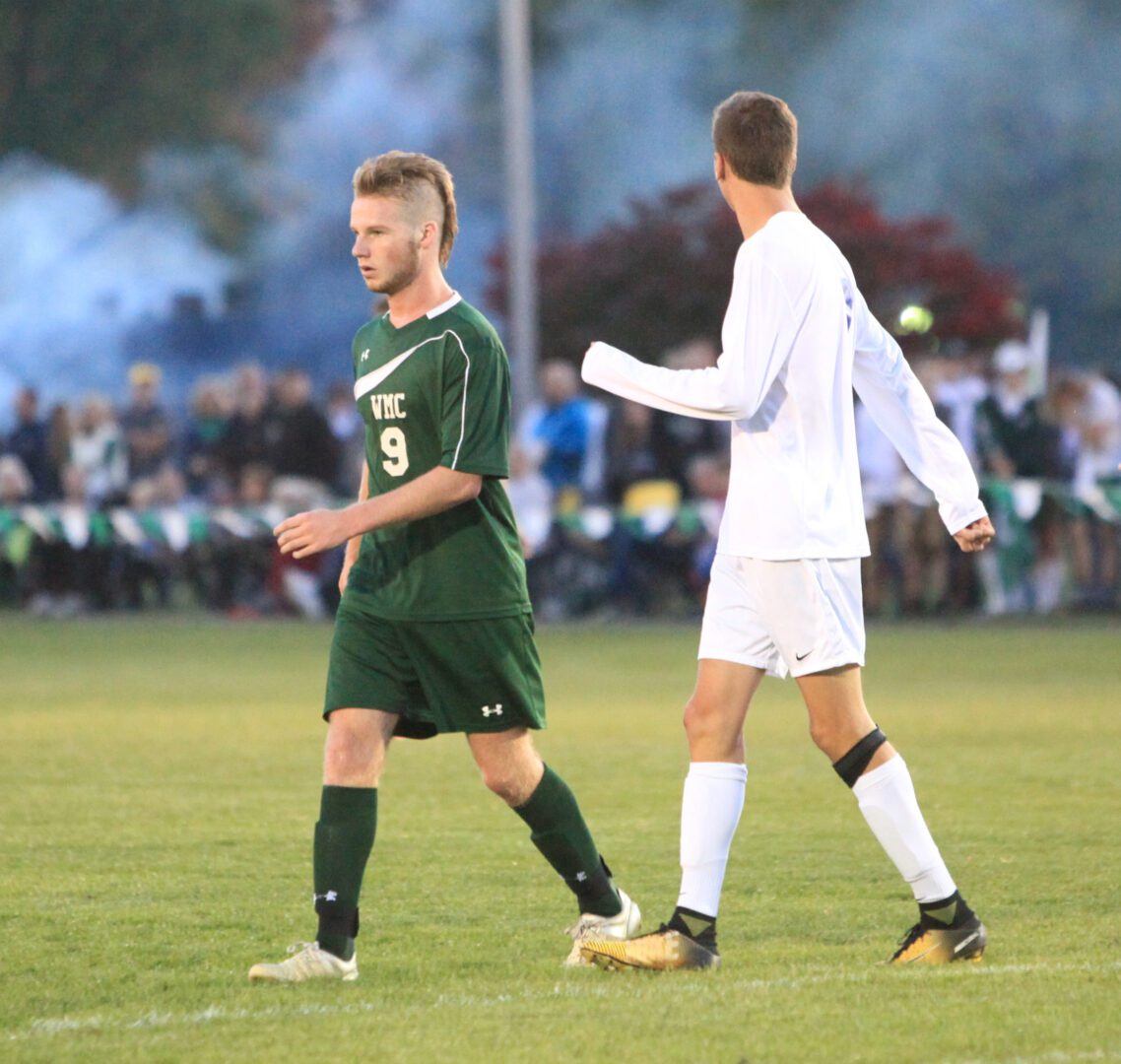 Tyler VanBeek looks to the sideline between plays. Photo/Jason Goorman 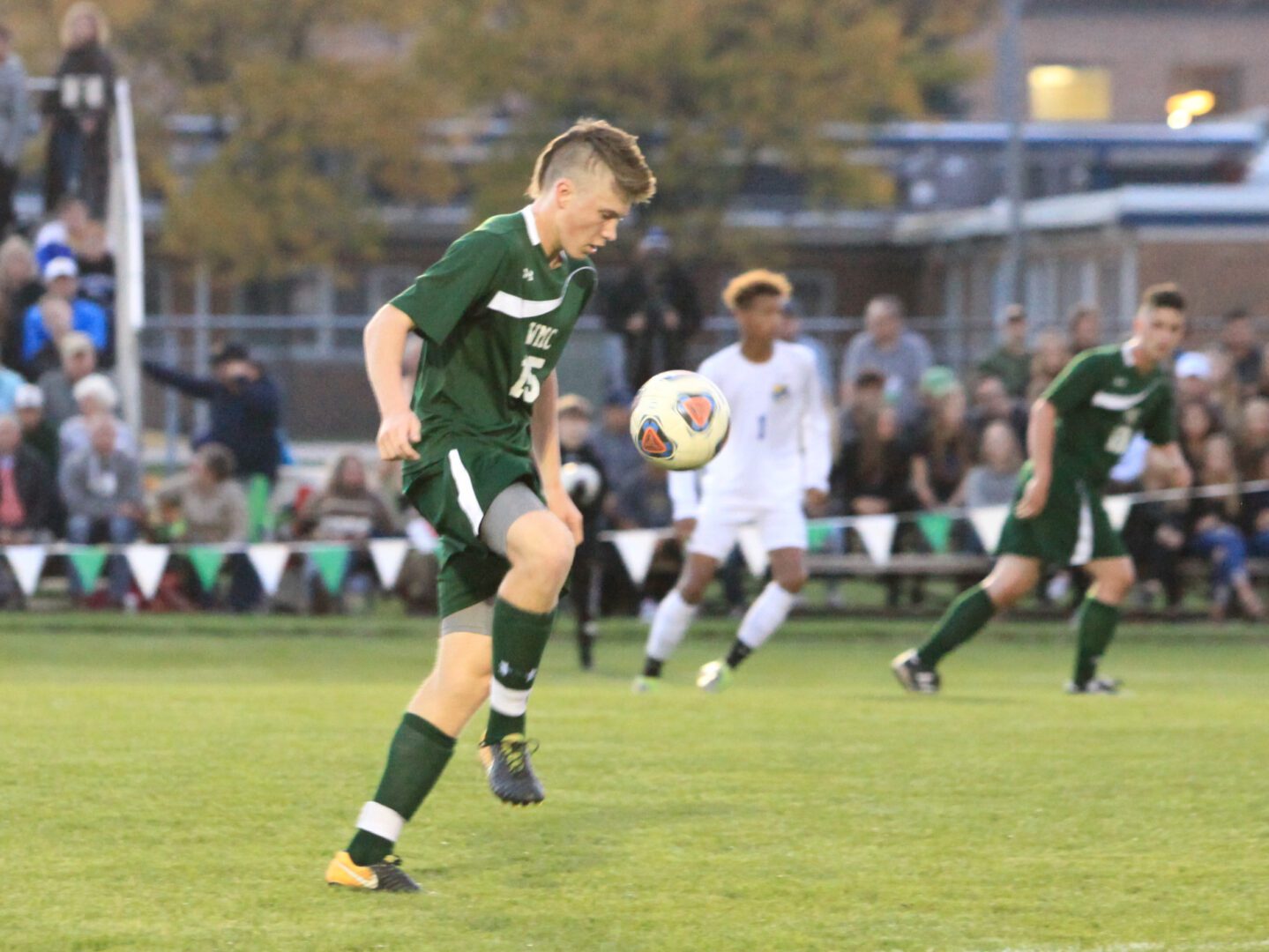 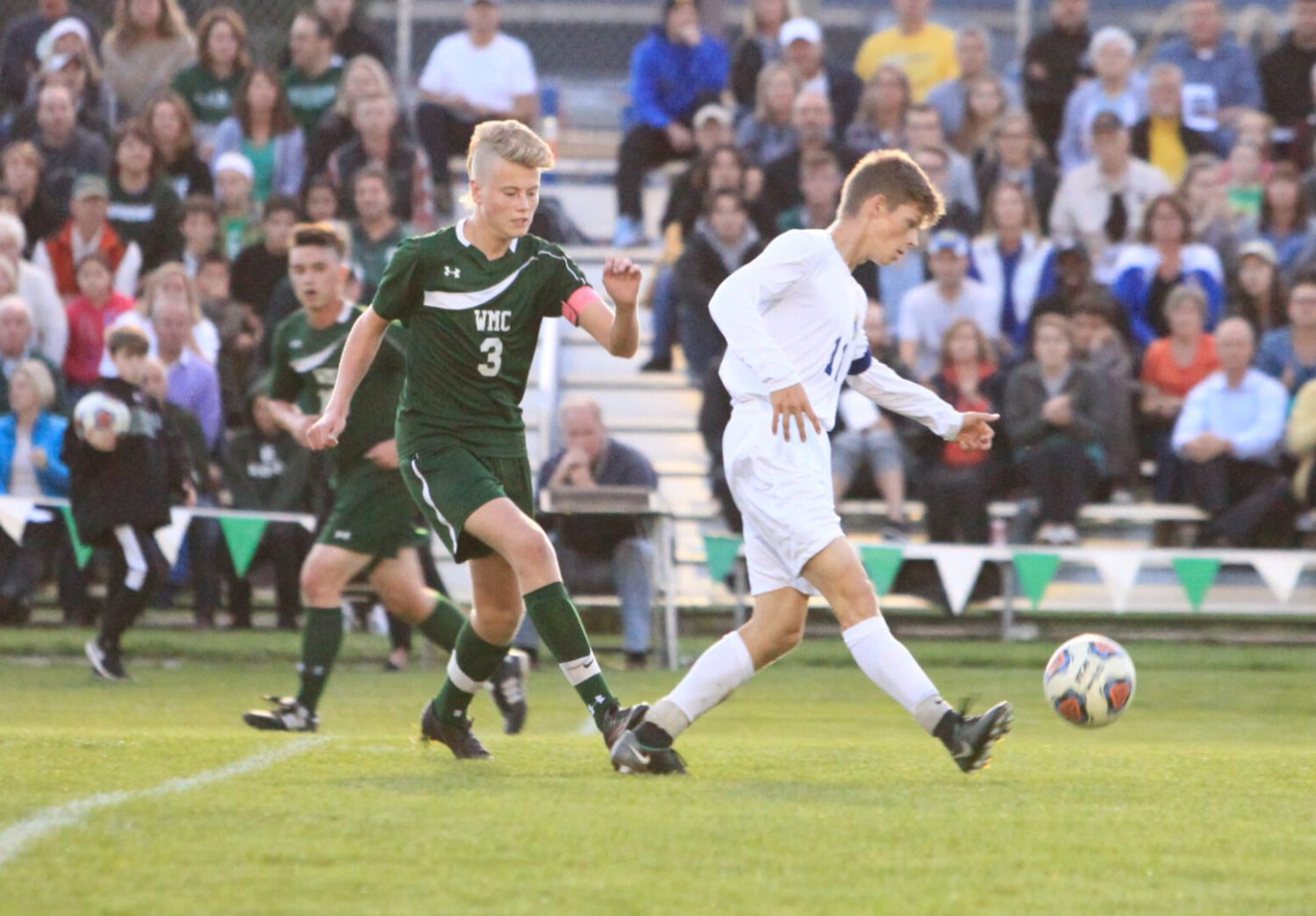 Owen Alfree looks to get the pass past NorthPointe’s No. 11 Clayton VanderKolk. Photo/Jason Goorman 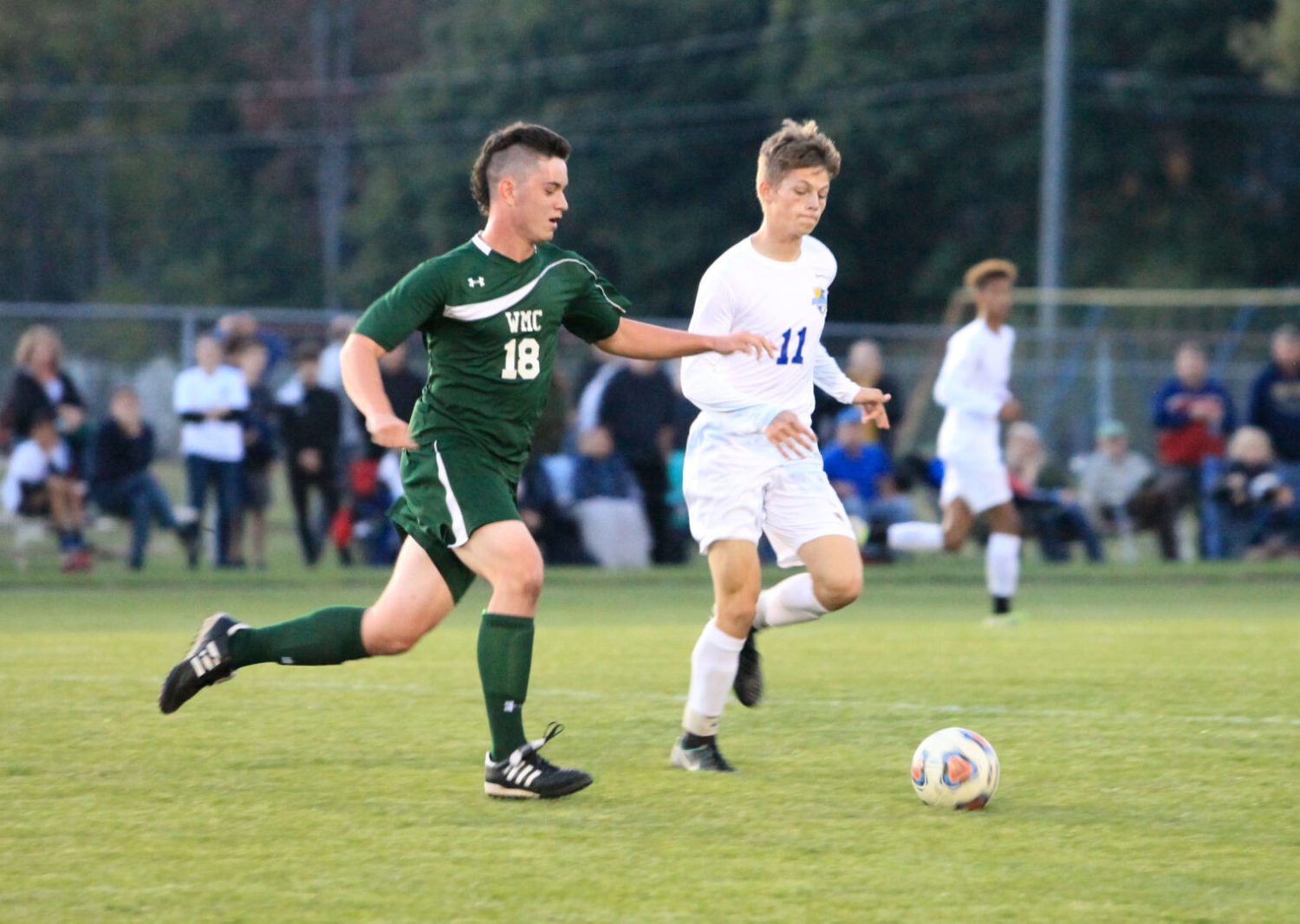