Friday, and it wouldn’t be smart to bet against the Trojans winning another one next year.

That’s because the team’s three big hitters – Kylie Oberlin, Rachel Paulsen and Jordyn Carlyle – are just juniors, and should be even better next fall.

The three standouts combined for 44 kills on Friday, powering Fruitport to a four-set victory over Whitehall in the district title match on its home court. 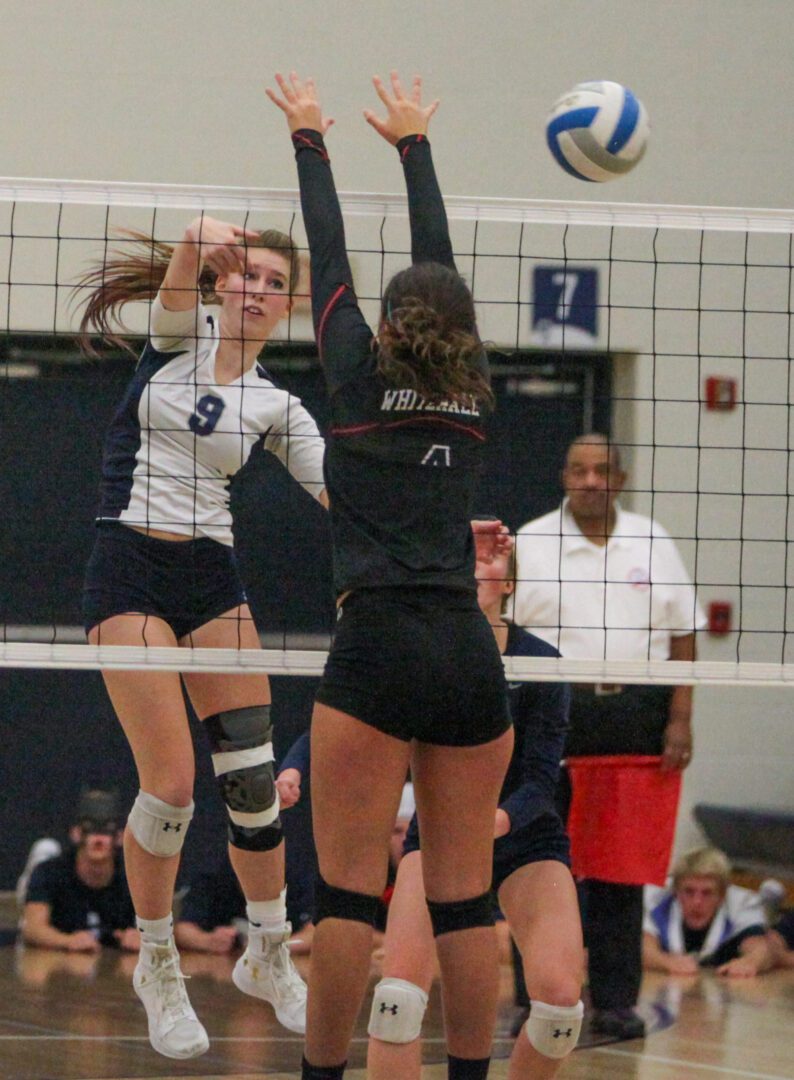 Jordyn Carlyle goes for the spike past Whitehall’s No. 4 Clara Moore. Photo/Jason Goorman

Fruitport, now 33-17-4 on the season, advances to the Class B regionals on Tuesday night against Grand Rapids Catholic at Orchard View High School.

On paper, Fruitport and Whitehall are two good teams that seem pretty evenly matched, The big difference on Friday was the Fruitport power game, sparked by Oberlin, Paulsen and Carlyle.

Every time Whitehall started to overcome a shaky start and get back in the match, one of the three would pound home a hard kill or drop a soft shot in an open spot, to return the momentum to Fruitport.

Paulsen led the way with 18 kills while Oberlin had 15 and Carlyle chipped in 11.

“They are a nasty trio, aren’t they?” said Fruitport Coach Nicole Bayle. “They have really stepped up. They’ve really learned how to place the ball, too. They make smart choices with their shots, which is what we’ve been trying to get them to do all season.”

Fruitport has eight juniors, five sophomores and only one senior, so some observers were probably expecting a rebuilding year from the Trojans.

But the young players have shown steady progress throughout the season, and demonstrated that they were ready to win right away. 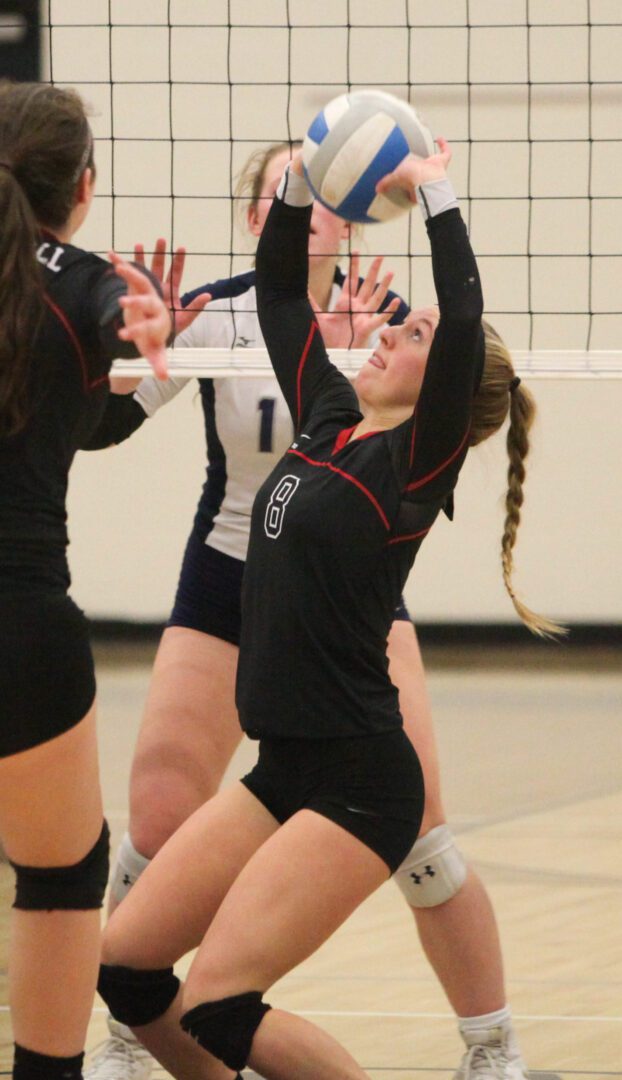 “I always think we can win a district title, but we definitely had some work to do this year,” Bayle said. “This team has come a long way in terms of maturity and focus. They set huge goals for themselves, but they never really knew how to get there

“They’re starting to figure out that it doesn’t come easy. It’s all about intensity and work ethic, committing to teammates and being selfless.. The result is success, and it’s important for them to learn that first-hand.”

Fruitport got off to a very hot start against Whitehall, grabbing a commanding 6-1 lead in the first set behind three kills by Paulsen and two by Oberlin, and a six-point service run by Trinity Busscher.

The Trojans never looked back, winning the first set by 15 points.

The Vikings pulled themselves together in the second set. The score was tied eight different times before Whitehall squeaked out a two-point victory to even the match at one set apiece.

But Fruitport regained control after that, winning the third set by five points and the fourth by 15.

Whitehall finished the season with a 29-16-4 record.

“We played out butts off,” said Whitehall Coach Ted Edsall. “The scoreboard wasn’t going to define us tonight. I asked them to play as hard as they can and play Whitehall volleyball, and they did that. We just played a team that did a little bit better.”

Abby Seeger paced the Vikings with 12 kills, Katelyn Goodrich had 19 assists and Gianna Megna led the defense with 18 digs. 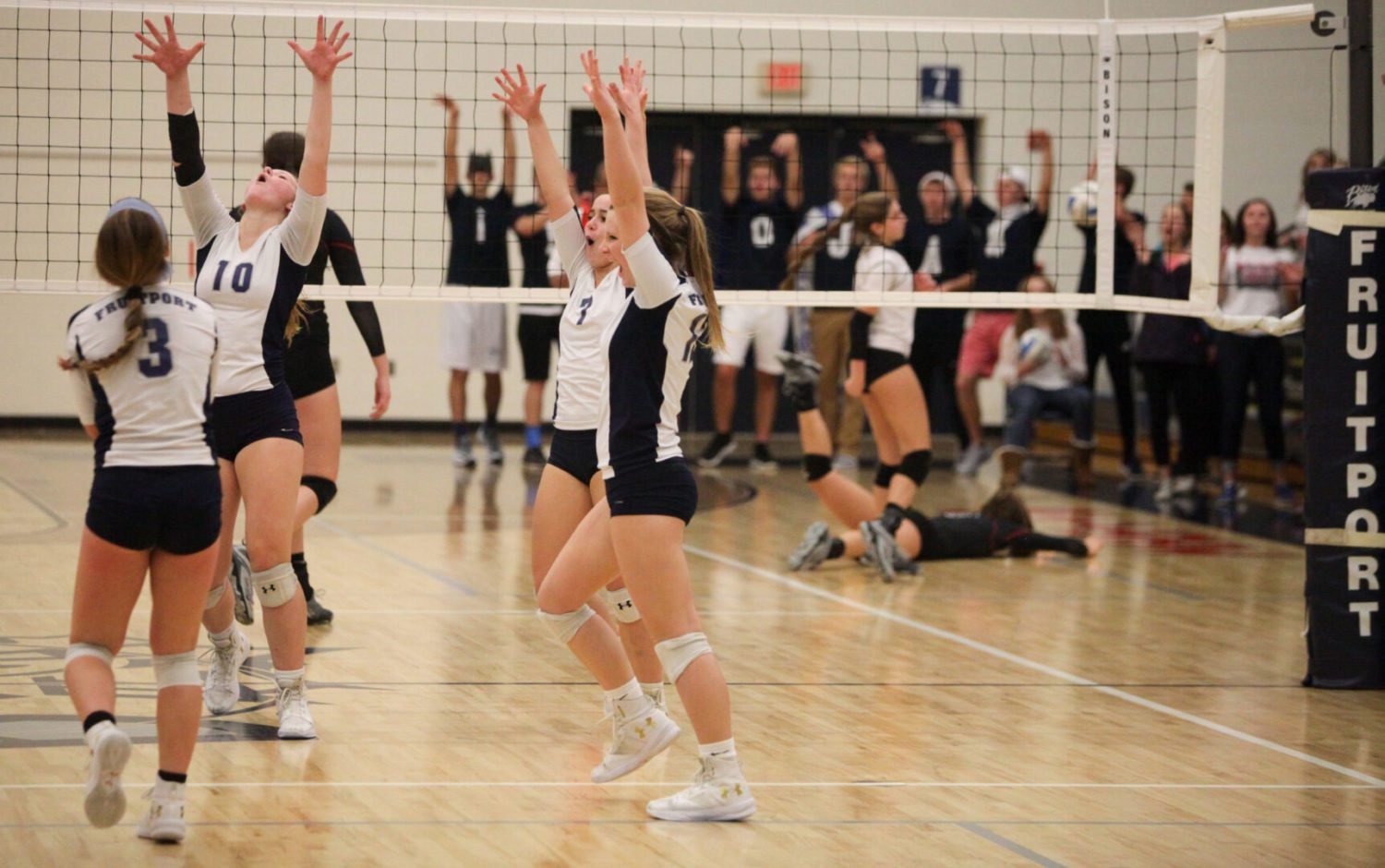 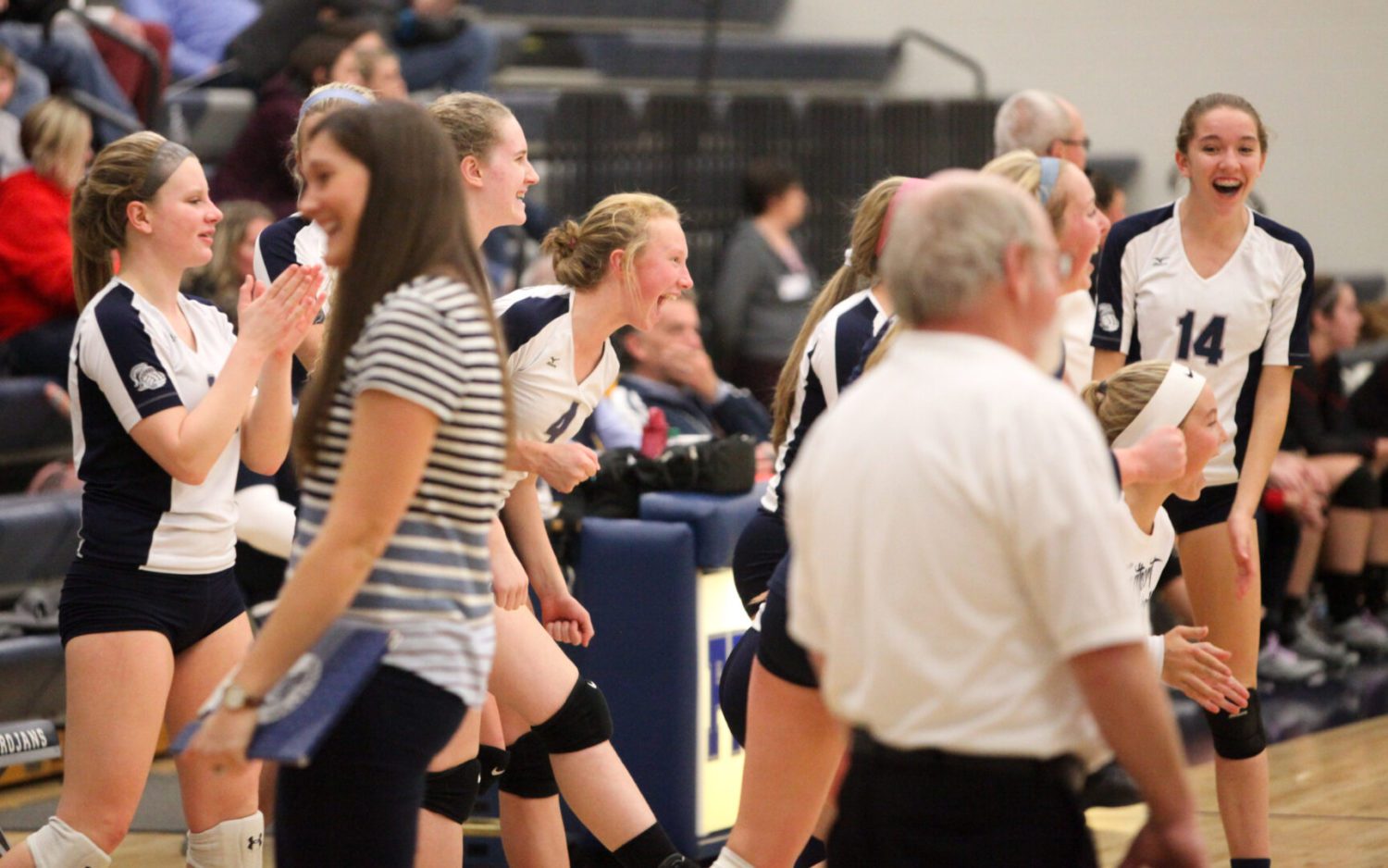 The Fruitport bench erupts after a point during Game 4. Photo/Jason Goorman

Lumberjacks hold off late Youngstown comeback, skate away with a 5-2 victory