So it’s not surprising that the school has a very small volleyball team, at least from a numbers perspective.

The Falcons only had eight players on their varsity roster in the regular season, and only added one junior varsity player for the state tournament. 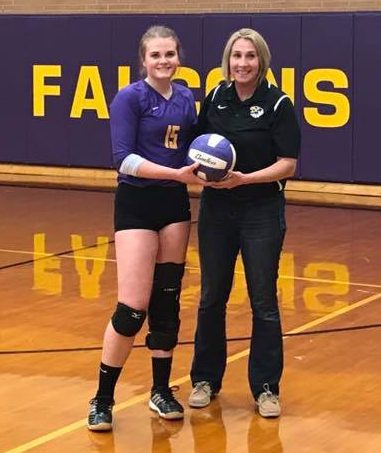 Considering volleyball teams have six players on the court at one time, the Falcons don’t have a lot of depth, or even enough players for a full team scrimmage.

But Coach Kerry Newberg kind of likes it that way.

“At practice I have to play a lot,” Newberg said. “I ask some of my friends who still play to scrimmage against the girls. You do what you have to do.

“I’m so used to (the small roster) that if I have the JV and varsity practicing together, I feel like it’s too much.

“I don’t have girls sitting on the sidelines during practice. They are always touching the ball, which is a good thing.”

Obviously the practice plan is working, because Pentwater has had solid success in volleyball for the past five years.

They have won at least a share of the West Michigan D League title for four straight years, and have been outright champions for the past three.

They are currently 37-7-1, and will try to keep their outstanding season alive when they meet Mount Pleasant Sacred Heart on Tuesday in the Class D regional semifinals at 5:30 p.m. at Pinconning High School.

The winner will advance to Thursday’s regional finals against the winner of the Muskegon Catholic-Fife Lake semifinal.

Pentwater Falcons in action during their district title run.

Sacred Heart been a major stumbling block for Pentwater, eliminating the Falcons from regionals four years in a row.

Last year the Falcons came close, pushing Sacred Heart to a fifth-set tie-breaker before bowing out.

“We haven’t been able to get past them,” Newberg said. “Last year it went five sets and three and a half hours. It could have gone either way. Hopefully this year the pendulum swings our way.”

Having a great volleyball team is not an old tradition at Pentwater. When Newberg took over the program five years ago, winning was not something that happened a lot.

The Falcons showed signs of life in her first season, finishing third in their conference and winning a district championship. They tied for the conference championship the next year, and have won it outright every year since then.

They haven’t lost a conference match in the past two years, and have a 35-match conference winning streak. 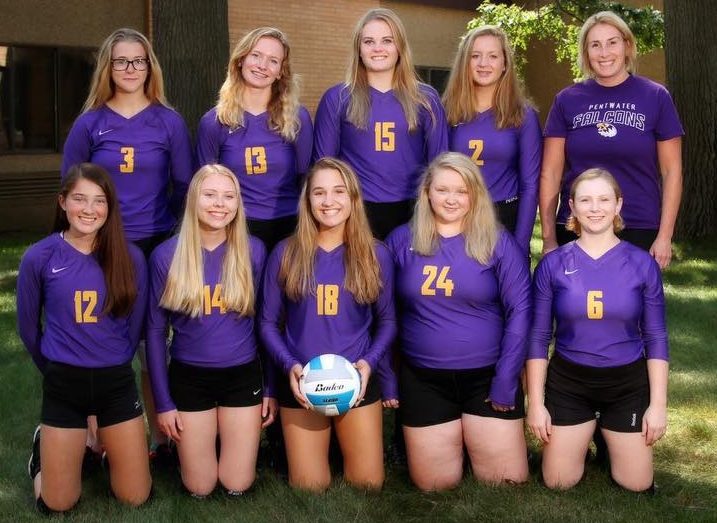 “They were last or second to last in the conference when I took over,” said Newberg, a former standout at Ludington High School and Muskegon Community College.

“I took over when the season had already started. Something happened with the previous coach, and they had three wins the previous year, so when I came in they just asked me to see what I could do.

“But when I showed up at practice, I could see right away that they were good athletes, and I didn’t understand why they weren’t winning. We just started by implementing a simple offense and defense, found some success, and we’ve just been building on that.”

On paper, the Falcons didn’t seem like candidates to have such a great season this fall.

They lost standout hitter Linnea McDonough to graduation last spring, and their roster includes only three seniors, along with two juniors, two sophomores and two freshmen.

But the young squad pulled together and beat just about every opponent that came its way this season. And Newberg thinks this year’s team has a chance to get farther in the state tournament than any of its predecessors.

“I thought a few times in the past, this is the team to do it, but the younger players weren’t quite ready,” she said. “This group of younger players have the mindset of older players.

“We have great chemistry, and a lot of aggressive girls who are willing to do whatever it takes.”

The Falcons are led by senior outside hitter Taylor Wilkinson, who passed the career 1,000-kill mark this season, and will probably pass McDonough during regionals to become the school’s all-time kills leader.

Senior setter Allison McGregor has 948 assists along with 25 kills, 145 service aces, and 340 digs on defense.