FRUITPORT TOWNSHIP – There’s nothing like a few wins to breathe some life back into a struggling program.

Heading into the new season, new coach Steve Erny wondered how that experience might affect the players this winter.

So far it looks like the Fruitport boys have put the past behind them.

They are off to a 2-1 start, with their latest win coming in an easy 64-29 non-league victory over neighboring Fruitport Calvary Christian on Tuesday.

The Trojans beat Holton in their season opener, before falling to Spring Lake in their second game.

Fruitport’s Jay Thompson goes up for the layup. Photo/Leo Valdez

The good news for Fruitport, according to Erny, is that most of the players from last year’s team are back this season. They learned a great deal from all the losses and are squarely focused on the future.

“These guys have to hear it all the time – how they didn’t win a game,” Erny said. “I think they are tired of hearing about that. Everybody from that team is back. They were young last year, mostly first-year varsity players, and they stuck through a tough season and learned a lot.”

Tuesday’s game, played at Calvary, gave the Trojans a chance to build more confidence and get everybody some game action.

They pretty much iced the victory right away, holding Calvary scoreless in the first quarter and racing to a 22-0 lead.

Everybody on the Trojan roster scored. Leading the way was Aric Stewart with 17 points, including three triples. He was followed by Marcelo Conklin with nine, Kaleb Krueger with eight, and Jay Thompson and Brendan Kemme with six points apiece.

“This was a nice confidence-builder,” Erny said. “We’ve done it twice now. This is a good group of guys. I don’t have any issues with them working hard. We just have to keep playing smart and working together. We’ve got to get a lot better as we get into the meat of our schedule.

“I think the guys are excited right now because they know they’re better from sheer experience. There is some excitement and energy now.”

Fruitport Calvary, now 1-2, didn’t have much to be excited about in the early part of the game. The Eagles had nine turnovers in the first quarter, missed all five shots from the floor and came away scoreless at the buzzer. 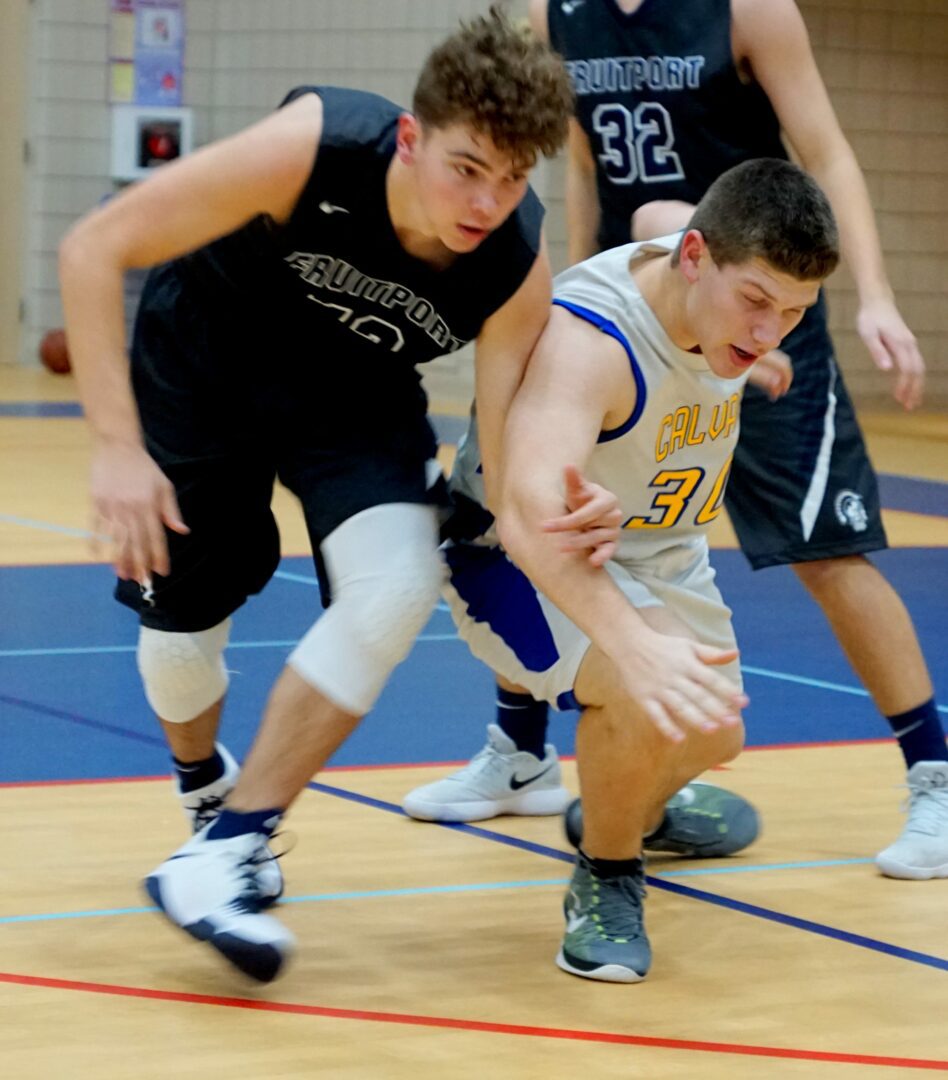 But the Calvary players kept their composure and kept battling, scoring eight points in the second quarter, nine in the third and 12 in the fourth.

The Eagles collected a 3-pointer from Ben Zelenka in the fourth, and hit seven of nine free throws. It didn’t make the score much closer, but the team improved as the game progressed.

But playing better in the second half of a blowout loss didn’t make Eagles Coach Jeff Zehr feel much better.

“This was one of those games where I was disappointed in how we came out,” Zehr said. “We didn’t play how we are capable of playing. It was a game we could have kept a lot closer. The guys usually play with a lot more heart.”