But the Jayhawks rebounded this Saturday with a 97-87 double overtime victory over St. Clair Community College. 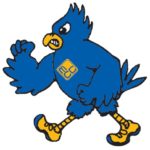 Last week the Jayhawks opened an early double-digit lead, then ran into foul trouble, which allowed Macomb to rally. MCC led 41-40 at halftime.

MCC built another double-digit lead in the second half, but then three Jayhawks fouled out and Macomb rallied and stole the victory.

There were 63 fouls called in the game. The Jayhawks hurt themselves by missing 16 free throws.

But things went much better for the Jayhawks this Saturday.

MCC only shot 29 percent in the first half and trailed 37-29 at halftime.

The Jayhawks rallied in the second half and led 70-67 with 1.4 seconds left. A desperation heave, shot from the mid-court area, went in for St. Clair, forcing overtime.

MCC led by two points with 4.6 seconds left in OT when St. Clair made another last-second shot to tie the score 79-79 and force a second overtime.

Diaz took over at that point, hitting back-to-back triples and scoring 13 of MCC’s 18 points, as the Jayhawks pulled away for the victory.