Chicago – the Fury and the Knights.

On Saturday, the Lake Hawks lost a halftime lead and fell to the Chicago Fury by five points.

On Sunday, West Michigan followed the same unfortunate script against the Chicago Knights. They led by double digits after the first quarter, at halftime and after three quarters, but ended up on the short end of a 100-96 score in ABA action at Reeths-Puffer High School.

The two weekend losses put a temporary dent in what has been an otherwise great start for the Lake Hawks. After winning six of their first seven games, they are now 6-3 on the season.

The Lake Hawks, who came into the weekend ranked eighth in the nation in the ABA, will return to action next Saturday with a road game against the Kentucky Enforcers. Their next home game will be Sunday Jan. 7 against the Illinois Bulldogs. 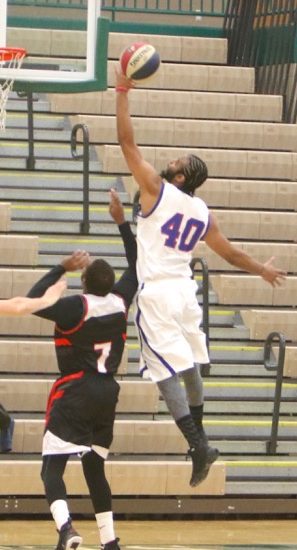 Terry Walker pulls down the rebound for the Lake Hawks. Photo/Joe Lane

The good news for the Lake Hawks is that they lost both weekend games with a very abbreviated roster. They were missing four players with injuries, including three starters.

Considering they only dressed six players against the Knights, Lake Hawks Coach Ron Jenkins was not ready to push the panic button after Sunday’s loss.

He said the team will get through its one remaining game before the holidays with its current lineup, then look forward to having some wounded soldiers return.

“I just want to get to the new year,” the coach said. “We can go with the six players until the new year. It was a tough weekend, but it was nothing new for us. We will go back, regroup and be ready for the next game.”

Despite being shorthanded, Jenkins said the Lake Hawks need to work on the mental part of their game, and learn how to finish when they have leads, regardless of how many players are dressed.

“It’s all in the mental,” Jenkins said. “You have to be on top of the mental part of the game down the stretch, and I think we lost that tonight.”

The Lake Hawks got a break of sorts before the game on Sunday, when Chicago showed up late and had just a few minutes to warm up before tipoff.

The lack of a proper warm-up showed when the Knights missed their first 11 shots from the floor. The Lake Hawks took advantage, jumping out to a 9-0 lead four minutes into the game, and had a 26-15 edge at the end of the first quarter.

Marquis Brewer led the Lake Hawks in the first quarter with 11 points, including three triples.

West Michigan held on to its advantage for most of the game, leading 47-33 at halftime and 73-58 after three quarters.

But the roof caved in on the Lakes Hawks in the fourth quarter, when they were outscored 42-23 and lost the game in the final minutes.

The Lake Hawks opened the fourth quarter with a three-point play by Xavier Fletcher and led 76-58 with just four seconds off the clock.

Walker hit a triple and a layup to pull the Lake Hawks within two points, 98-96, with 27 seconds left on the clock.

The Lake Hawks then used up the rest of their fouls, and finally sent Chicago’s Asante Smithers to the free throw line with three seconds left. He made both shots, settling the matter in favor of the Knights.

Chicago had eight three-pointers during the decisive fourth quarter.

Brewer and Otis Smith paced the Lake Hawks with 24 points apiece, Walker finished with 22, Fletcher scored 16 and Anthony McDaniel had 10.