around and the team had to take a 10-day break.

That’s because the Lumberjacks were finally playing great hockey after a slow start to the season. Some probably wondered if the sudden hot steak might be snuffed out by a lengthy break.

As it turns out, there was no need for concern.

The Lumberjacks returned to action in style on Saturday, dominating the Team USA Under-17 squad 3-0 in front of 2,206 fans at L.C. Walker Arena.

“The guys came back yesterday and our practice had a lot of energy,” said Lumberjacks Coach John LaFontaine. “With all the snow and the bad roads and everything, everybody made it back on time, and it was good to see. They are having fun and coming together at the right time.” 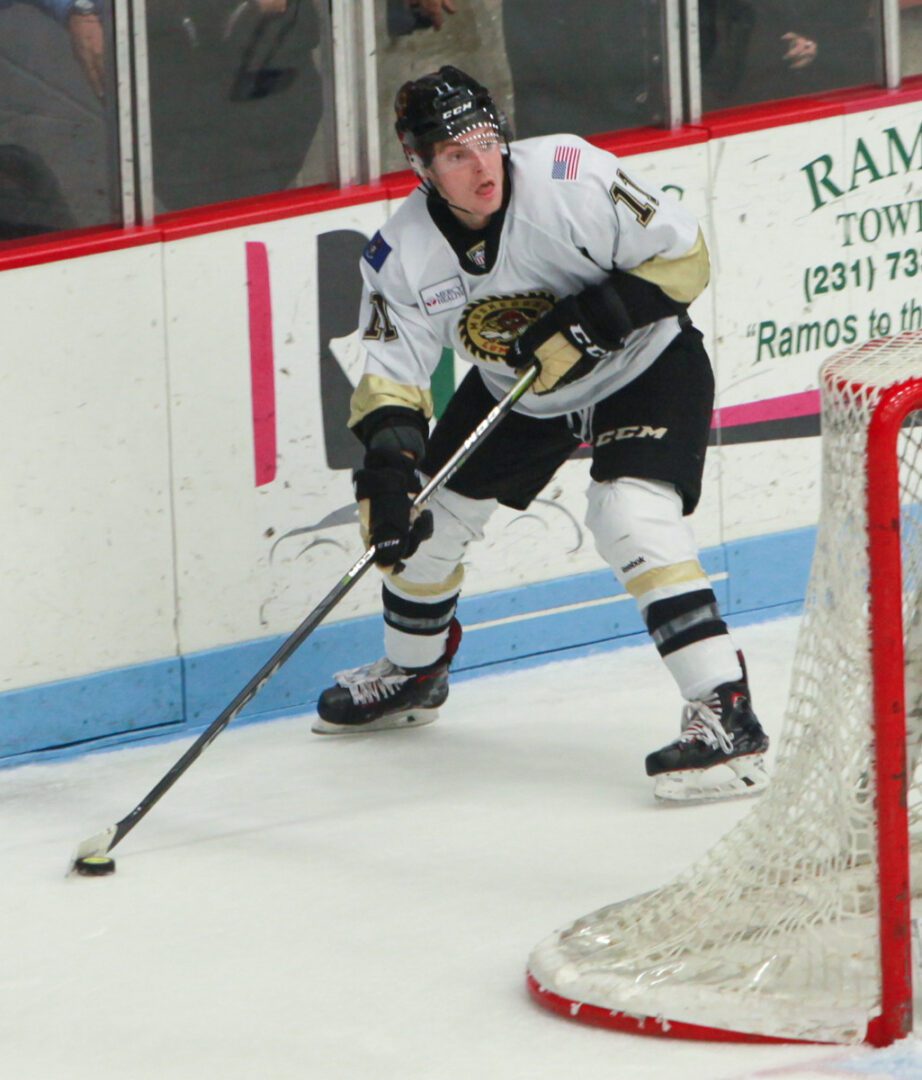 Muskegon’s Monte Graham looks for an open man in front of the USA net. Photo/Jason Goorman

The victory was Muskegon’s fifth in a row and evened its record at 11-11-2. The Jacks’ next game is Sunday night in Chicago.

The star of the game was goalie Keegan Karki, who stopped 18 Team USA shots to collect his first United States Hockey League shutout, and the Jacks’ second shutout of the season.

Karki, who the Lumberjacks acquired early in the season to be the backup goalie, is now 7-5 on the season, and has been in goal for each of the five straight victories.

“He’s a young kid, but we knew he had a lot of talent and ability, and it’s great to see him playing with confidence,” LaFontaine said.

“The guys are really taking pride in the way they’re playing, blocking shots and making plays on the other team,” LaFontaine said about the penalty killers.

The Jacks opened the scoring with a shorthanded goal from Matej Pekar at 6:29 of the first period. Pekar broke in to the right of the Team USA goal and unleashed a shot, which deflected off the stick of a defender and caromed off another Team USA player and into the net.

Matt Staudacher was credited with an assist on the goal.

Muskegon’s Benito Posa added a goal at 15:56 of the first period to give the Jacks a 2-0 lead at the first break. Colby Bukes got the assist.

The Lumberjacks finished off the scoring at 1:03 of the second period when Emilio Pettersen tipped in a rebound off a blocked shot to collect his fifth goal of the season. Vincent de Mey and Bukes assisted. 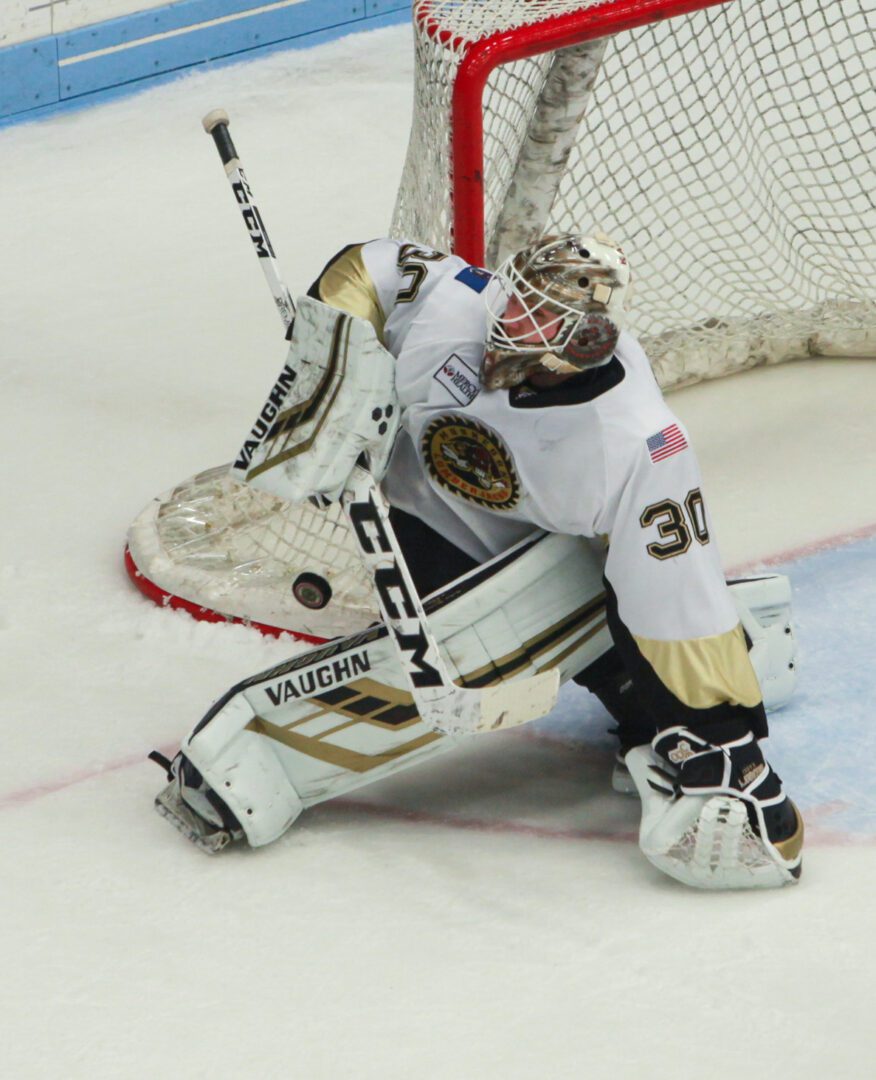 Keegan Karki makes a big saves as time gets ready to expire for the Muskegon. Photo/Jason Goorman 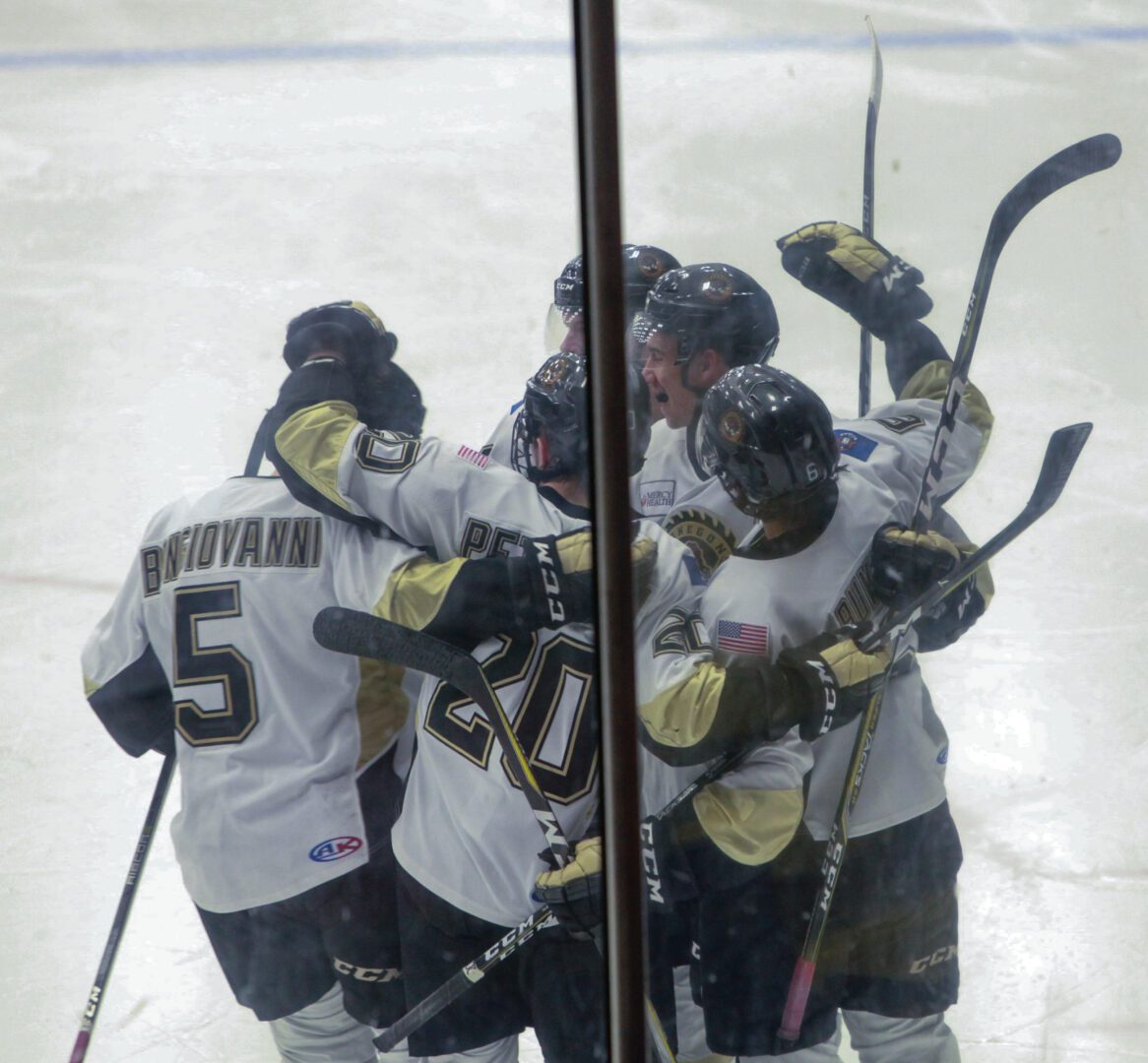 The Jacks celebrate after a goal against Team USA last weekend. Photo/Jason Goorman 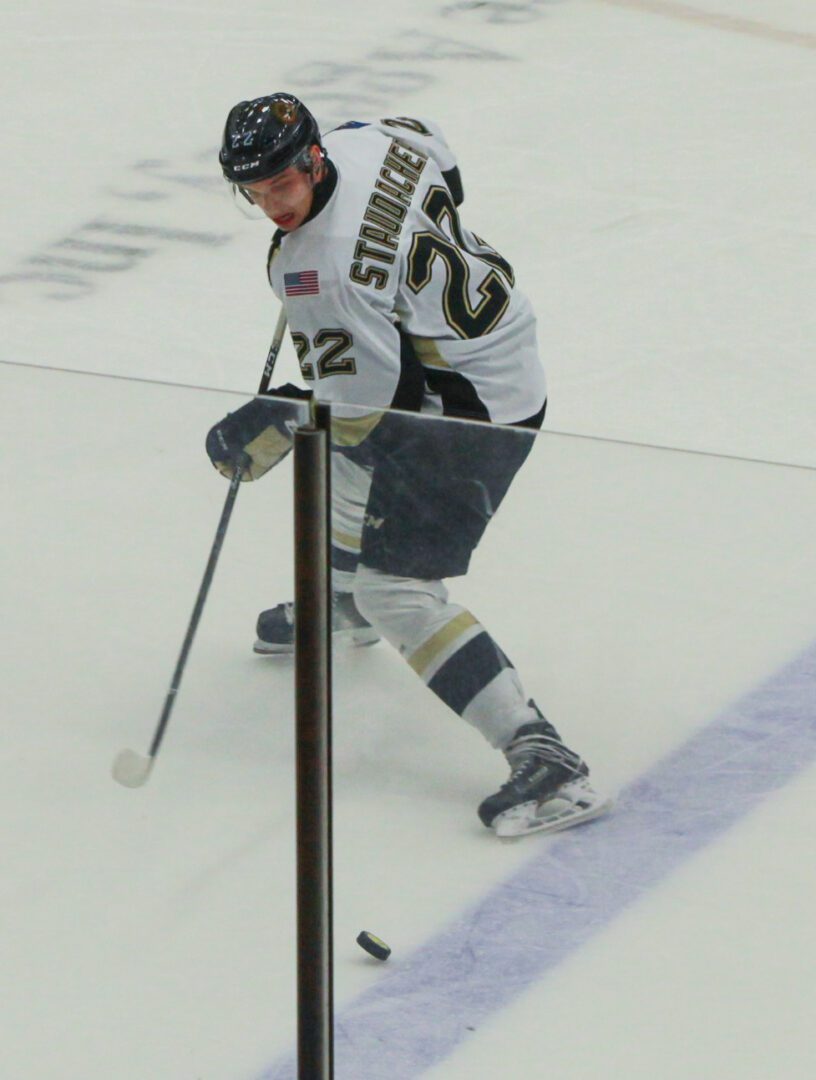 Matt Staudacher looks to keep the puck in zone for Muskegon. Photo/Jason Goorman 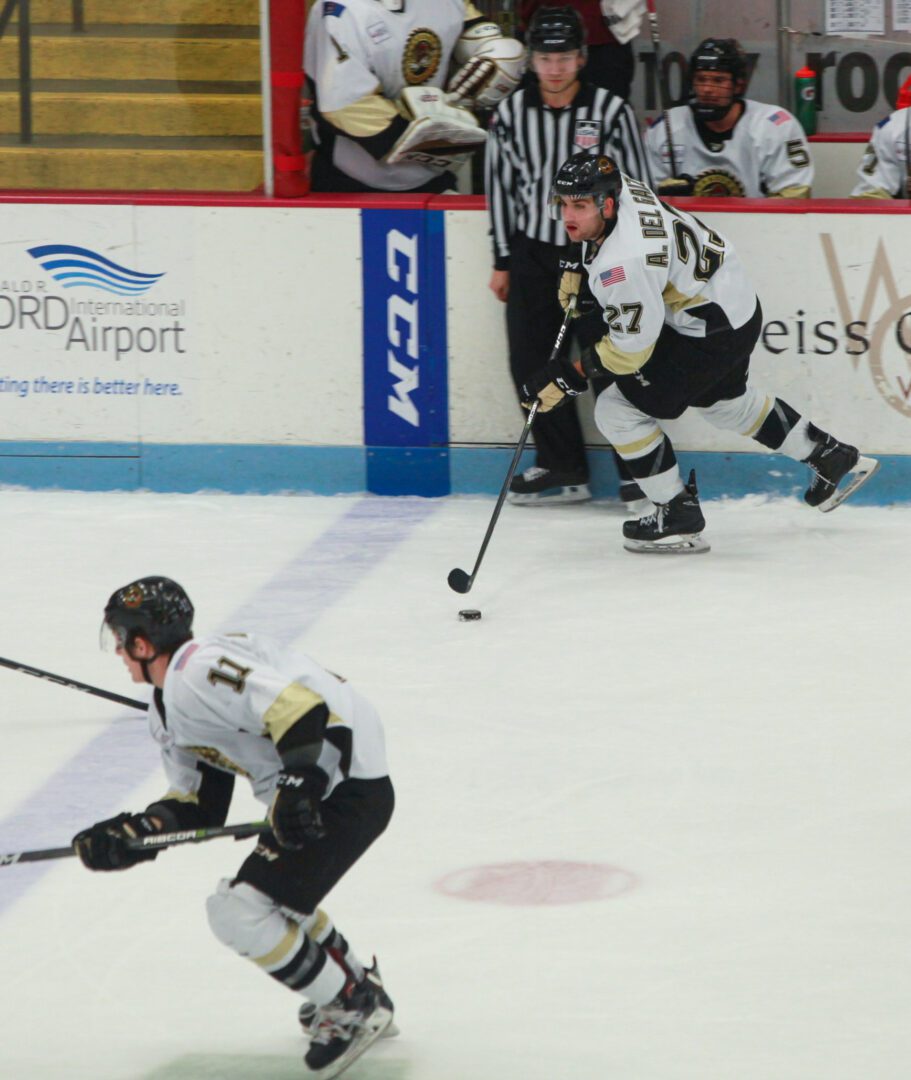 No. 27 Anthony Del Gaizo pushes the puck up the ice with Monte Graham on his wing. Photo/Jason Goorman 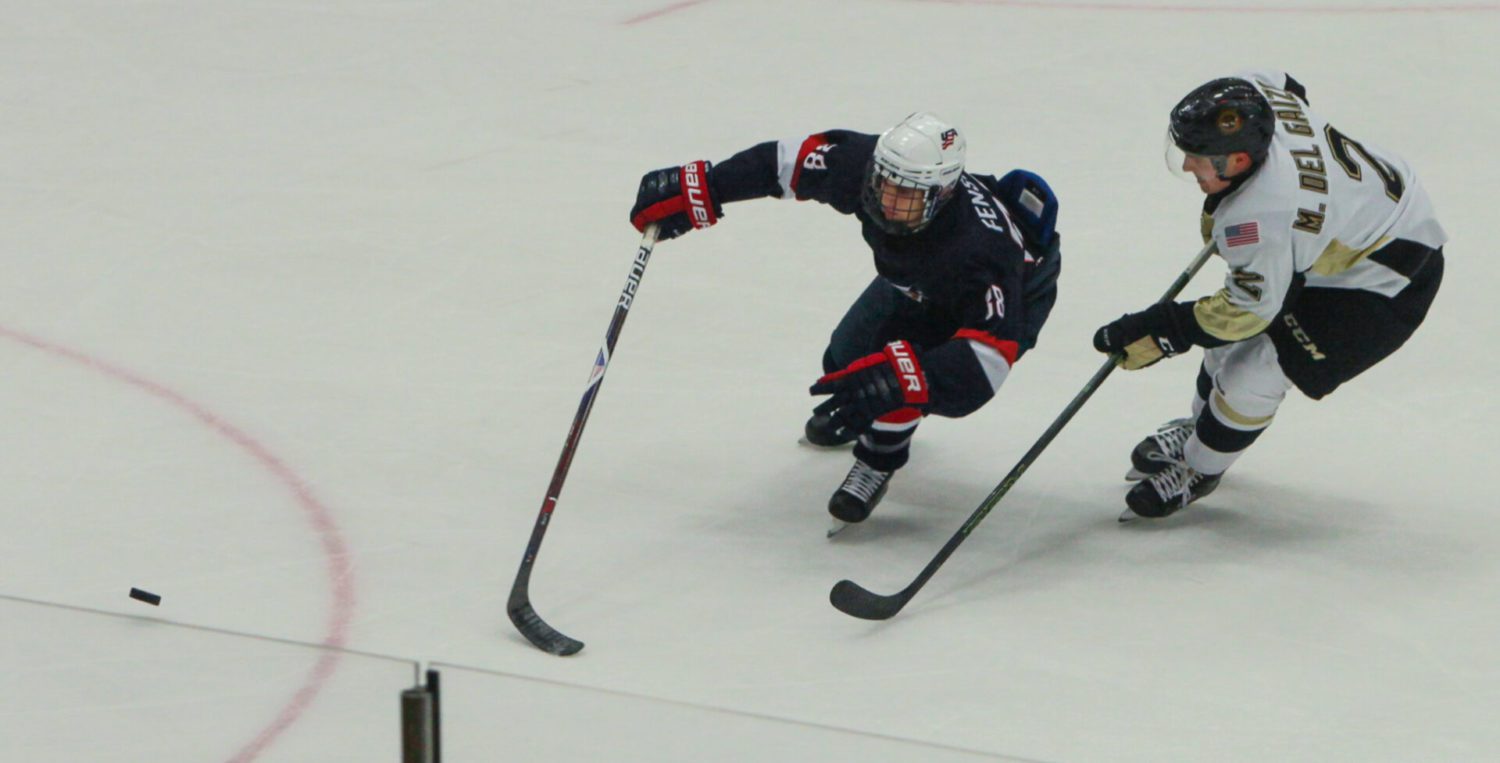