MUSKEGON – The Muskegon Lumberjacks were on the verge of accomplishing something they have yet to do this season – win two games in a row.

But then a collapse down the stretch, caused in part by a cross checking penalty that left the Jacks shorthanded for the last 3:24 of the game, allowed Waterloo to score twice and hand the Jacks a disappointing 5-4 defeat in front of 1,422 fans at L.C. Walker Arena.

The Lumberjacks fell to 5-10-2 on the season and remained in last place in the USHL’s Eastern Conference. The loss was their sixth in their last seven games.

Muskegon will host Central Illinois on Saturday at 7:15 p.m.

The defining moment of the game came with 3:24 left and the score tied 4-4.

Muskegon goalie Keegan Karki made several sprawling saves in a crowded scrum in front of the net, but the Lumberjacks’ Anthony Del Gaizo was called for a cross checking penalty in the midst of the action, leaving the Jacks a man short for the rest of regulation.

Waterloo’s Matej Blumel took advantage by scoring the game-winning goal at 17:45 of the third period. 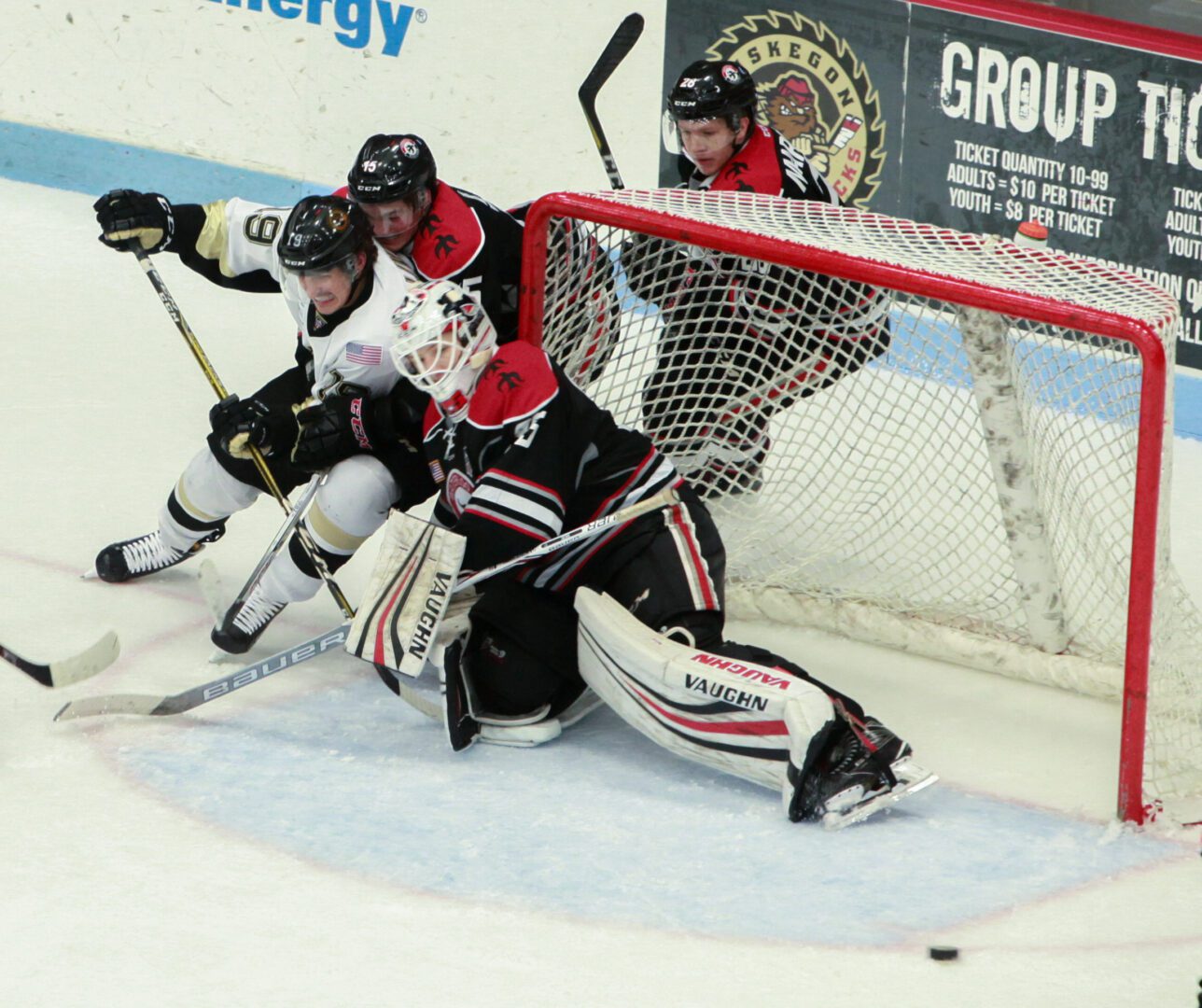 Muskegon’s No. 19 Nolan Sullivan attacks the side of the Waterloo net. Photo/Jason Goorman

Lumberjacks General Manager John Vanbiesbrouck gave his team credit for fighting back, but added that a loss is a loss.

He was particularly frustrated by the number of odd-man rushes the Lumberjacks gave up, including one that led to a Waterloo shorthanded goal in the first period.

“The players deserve a lot of credit for battling back, but close is only good in horse shoes and hand grenades,” said Vanbiesbrouck, who was on the bench helping with coaching duties in the absence of Lumberjacks Coach John LaFontaine, who was ill.

“When you get the lead and give up a few odd -man rushes, that’s the kind of stuff that you can’t do. You have to have more puck awareness. Those types of turnovers are going to kill you.”

Vanbiesbrouck was not happy about several of the penalty calls in the game, including the late cross checking call that gave Waterloo its decisive power play.

The Lumberjacks had nine penalties for 32 minutes while Waterloo had seven for 25 minutes.

“The unfortunate thing is when officials involve themselves in the game deeper than they should,” Vanbiesbrouck said. “How many 4-on-4’s and 4-on-3’s can you have in one period? It’s so bad that I can’t even begin to say how frustrating it is. I saw them interject themselves in the game and not let the players decide it.”

At least the Lumberjacks were able to impress their fans with their determination to fight back. 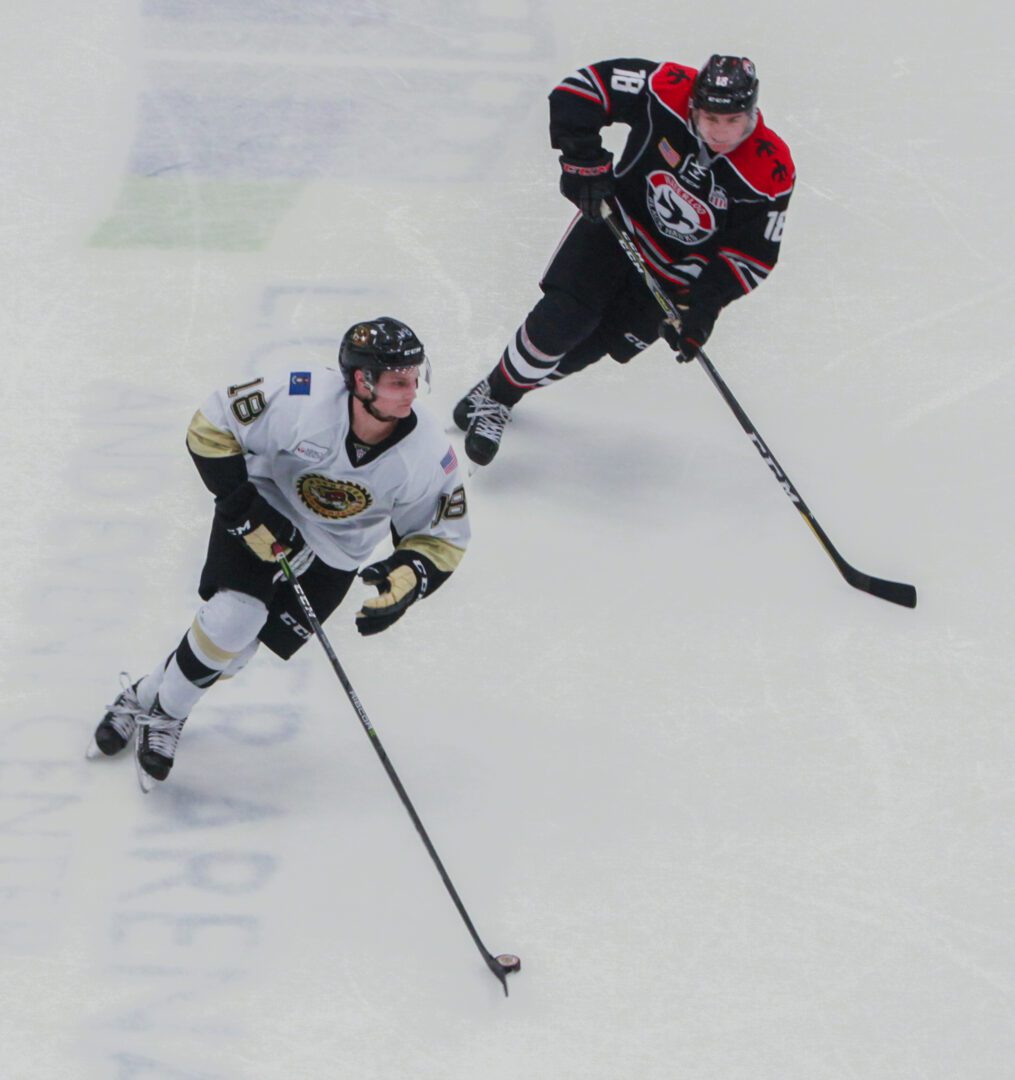 They fell behind 1-0 when Waterloo’s Salag Bakich scored just 38 seconds into the contest.

The Jacks tied the score at the 9:01 mark on Bray Crowder’s third goal of the season, with assists from Matej Pekar and Marc Del Gaizo. Waterloo’s Ben Copeland scored less than two minutes later, and the Black Hawks held a 2-1 lead at the first break.

Waterloo went up 3-1 with a goal from Jackson Cates at 9:26 of the second period, and the situation looked bleak for the Lumberjacks.

The Jacks took a 4-3 lead 6:28 into the third period when Emilio Pettersen fought off a Waterloo player, dug the puck out of the corner and centered it to Wyatt Bongiovanni, who chipped it past Black Hawk goalie Jared Moe.

But the lead didn’t last.

Waterloo’s Garrett Klee scored seconds after a faceoff in the Muskegon zone to tie the score 4-4 at 14:20 of the third period.

Hesperia comes through in the clutch, downs Shelby 42-38 in regular season finale