the Chicago Steel at the L.C. Walker Arena.

So he wasn’t around when the Lumberjacks outshot the defending USHL champion Steel, 44-26 on Oct. 13, yet still lost 3-2.

But he was there to make a big difference this time around. His goal with 9:30 left in the game gave Muskegon a one-goal lead on its way to a 4-2 victory over the Steel on Friday night.

Not only was it the 18-year-old forward’s first goal with his new team, it was his first in the USHL.

“Being a game-winner, it was awesome!” said Posa, who was playing in his fifth game for the Jacks after being called up from the North American Hockey League. “But I have to give credit to the guys on my line, they worked hard and I got lucky on the shot and it went in.” 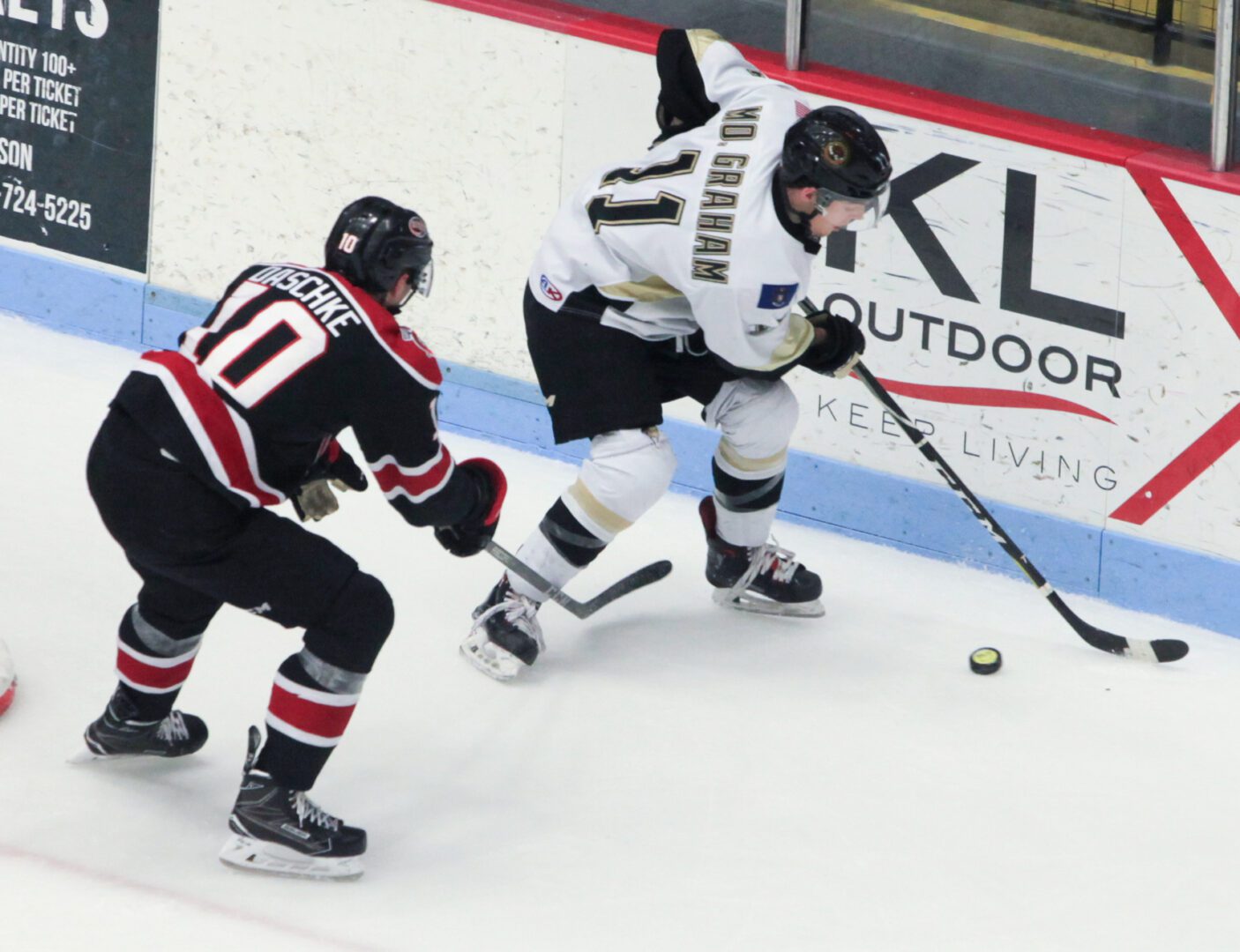 Monte Graham digs out the puck along the board against Chicago’s Derek Daschke. Photo/Jason Goorman

The victory marks the first time this season that the Lumberjacks have won consecutive games, after defeating Green Bay last Saturday. They will look to keep the win streak alive when they host Chicago again on Saturday at 7:15 p.m.

Muskegon jumped on top early when Anthony Del Gaizo one-timed a cross-ice pass from his brother, Marc Del Gaizo, giving the Jacks a 1-0 lead 6:39 into the first period.

Anthony Del Gaizo added his second goal of the night with 30 seconds left in the first period, after teammate Mikael Hakkarainen split the defense, moved in on net, then dropped the puck back to Del Gaizo, who one-timed his 12th goal of the season.

The Steel, who were outshot 16-7 in the first period, responded five minutes into the second when Cole Kodis backhanded a shot over Jacks goalie Keegan Karki’s shoulder, to cut the lead to 2-1.

Chicago had an opportunity to end the second period tied, but Karki’s glove save on a breakaway with three minutes left kept the Muskegon lead at one. 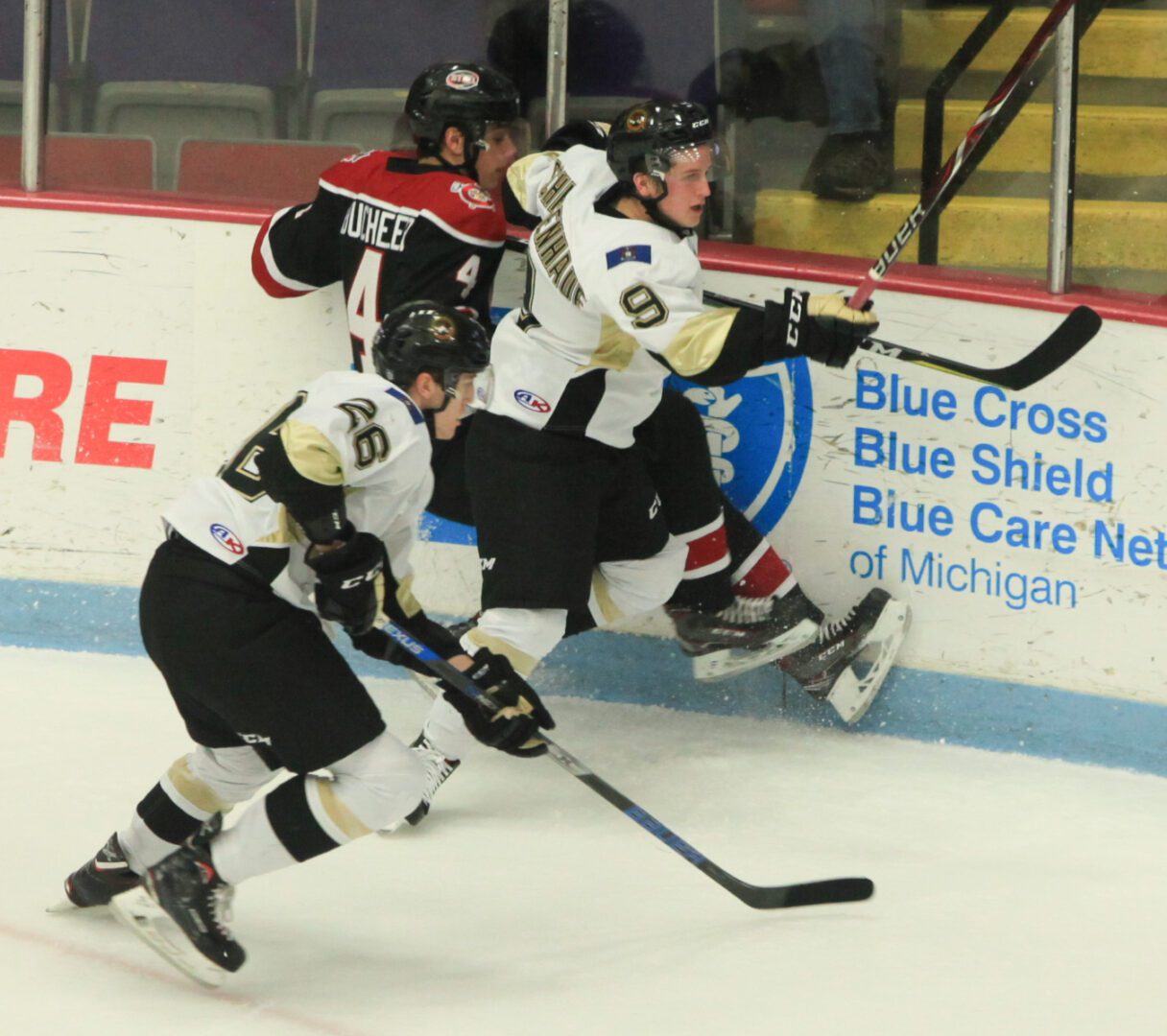 Will Schlangenhauf sends Chicago defensemen Jeremie Bucheler in the boards while Muskegon’s No. 26 Benito Rosa looks for the loose puck. Photo/Jason Goorman

The Lumberjacks killed off two Steel power-plays early in the third period, but with 10:17 left in the game, Chicago’s Samuel Bucek scored on a 3-on-2 break to tie the game at 2-2.

That set the stage for Posa, a Flint native, to score the game-winner.

Will Schlagenhauf and Posa battled two Steel defenders behind the net before Posa picked up the loose puck.

His initial shot got stuck in the side of the net, but he knocked it out and was able to lift it over the shoulder of Chicago goalie Oskar Autio to give Muskegon a 3-2 lead.

The Steel went on the power-play with 2:38 left in the game, and pulled their goalie for a 6-on-4 advantage, but Muskegon’s Emilio Pettersen scored an empty net goal from the red-line with 38 seconds left.

“We are playing completely different (than earlier this year),” Jacks coach John LaFontaine said. “We’re still generating shots, but we are playing smart, more physical and we’re managing the puck better. We’re growing. We’re not there yet, but we’re growing.”

Karki finished with 22 saves and Hakkarainen had two assists for Muskegon. Matej Pekar, Schlagehauf, and Nolan Sullivan added assists for the Jacks. 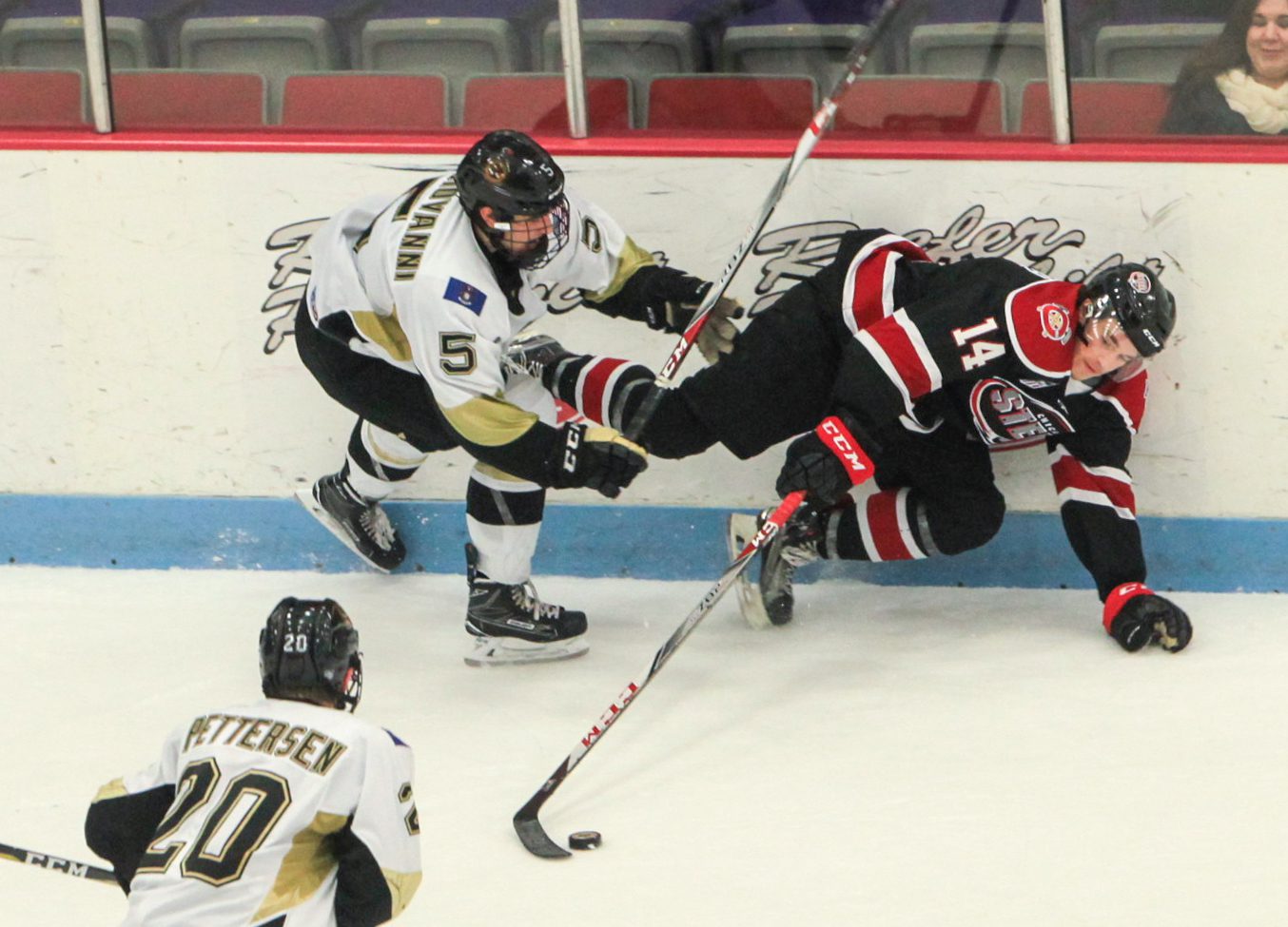 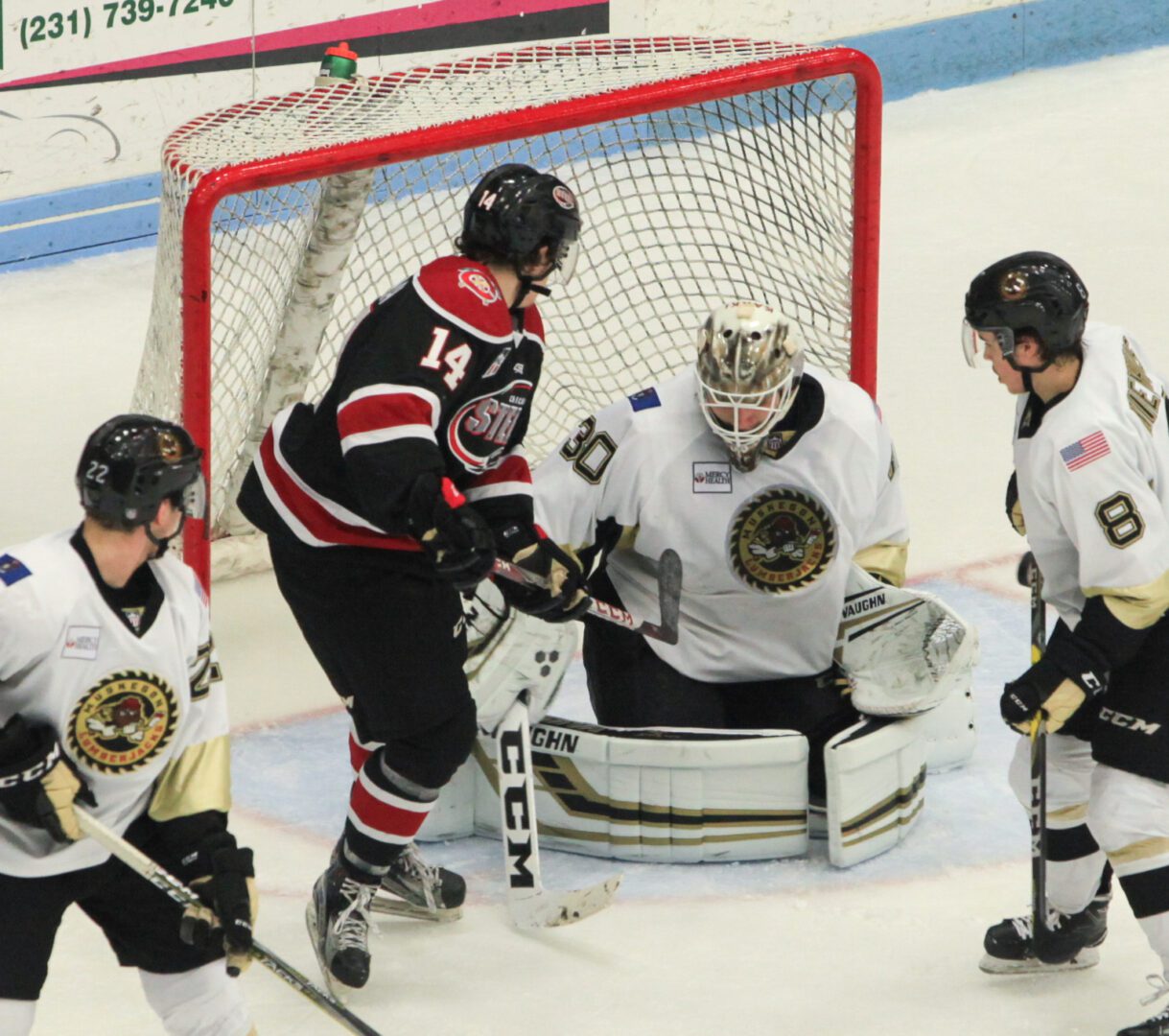 Keegan Karki frustrates a Chicago player after making a save in a recent game. 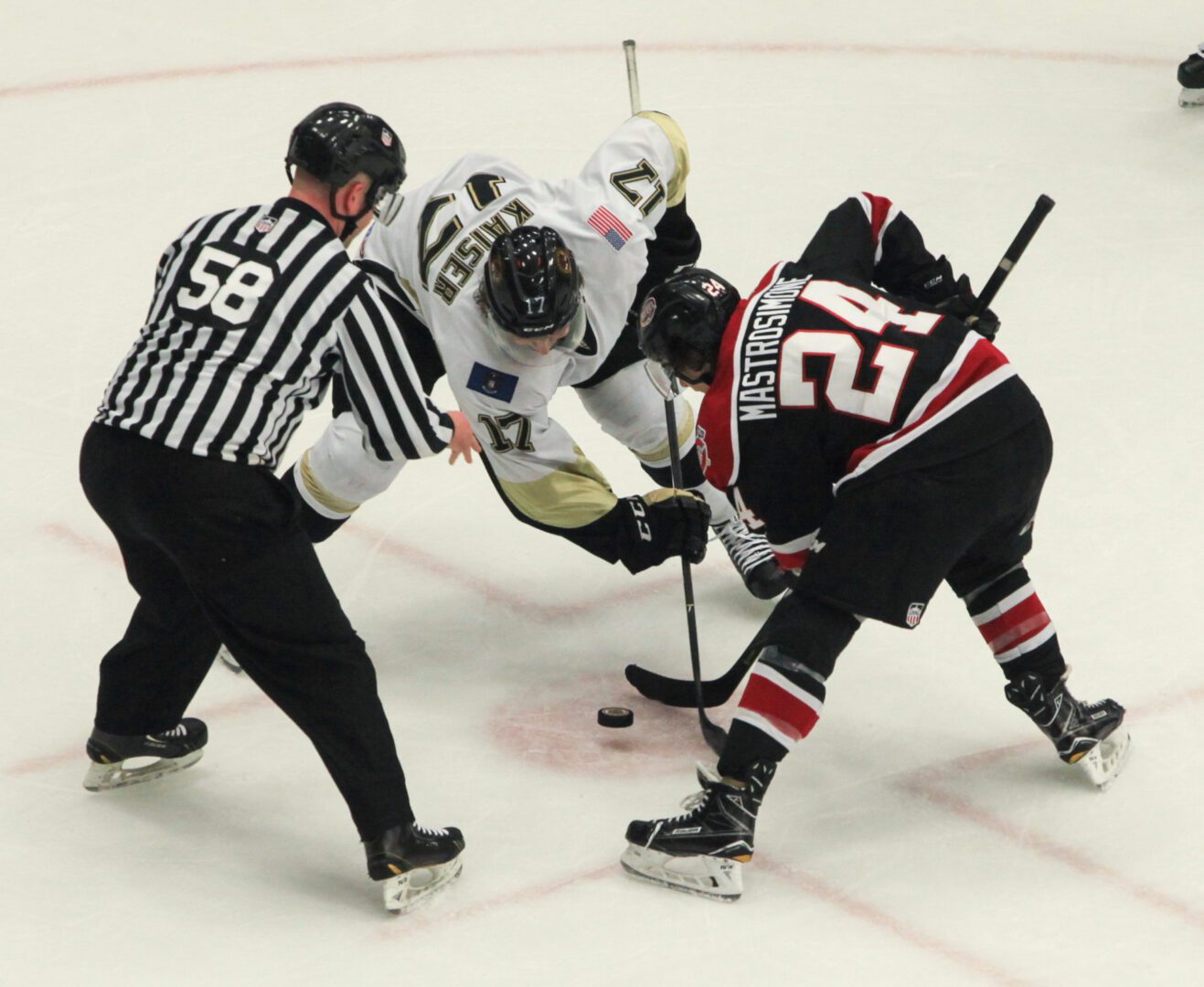 Bobby Kaiser digs in for the face off against Chicago’s No. 24 Robert Mastrosimone. Photo/Jason Goorman 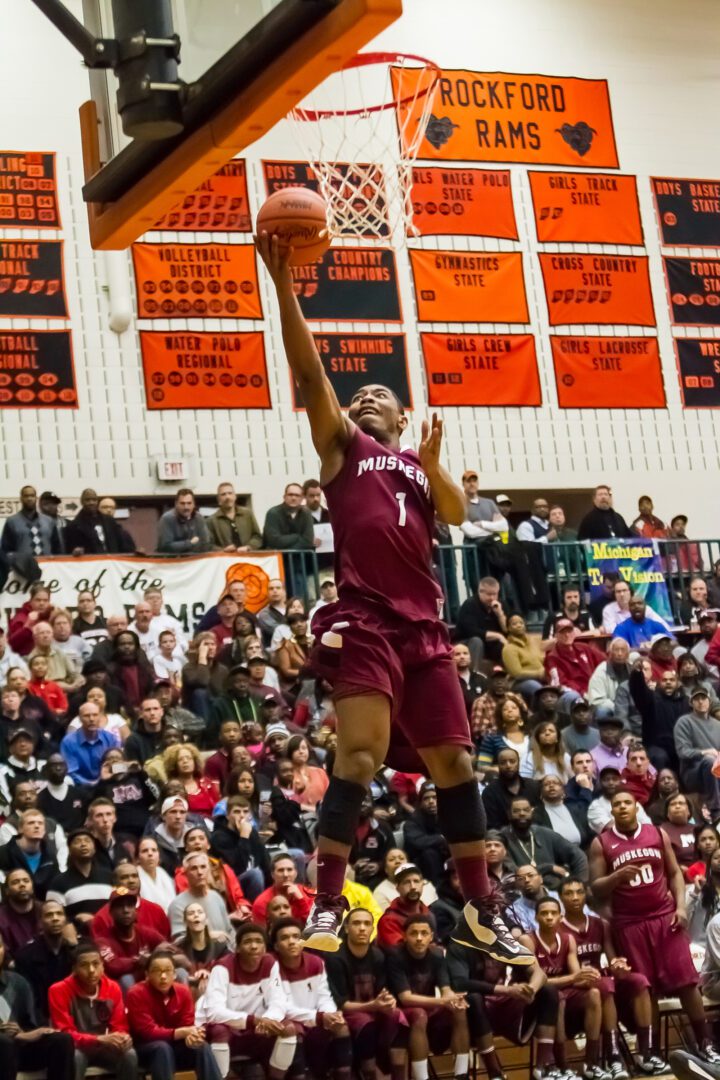