They might play poorly sometimes, but they definitely don’t quit.

The Big Reds could have folded up their tents when they fell behind East Kentwood by 15 points in the Meijer Muskegon Sports Hall of Fame Classic at Reeths-Puffer High School.

But Muskegon clamped down defensively, fought all the way back, and found itself in a 61-61 tie in the final seconds of the game.

That allowed Amari Saucier to be a hero.

Saucier took a pass from teammates Eonte Tornes and hit a jumper with 1.8 seconds left on the clock, giving the Big Reds a stunning 63-61 victory over the Falcons in their annual holiday matchup. 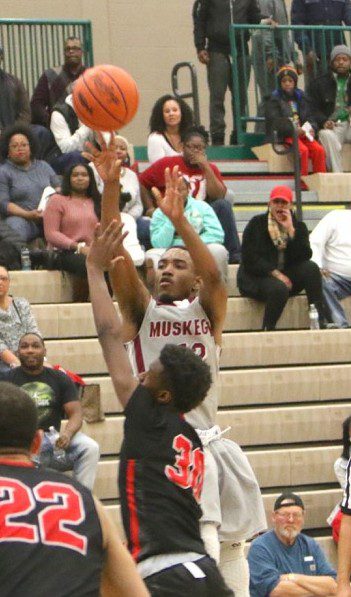 Muskegon, which lost to Grand Haven on the road last week, improved to 2-1 on the season.

The final play was actually designed for Tornes to drive the lane and hit the winning bucket, or at least draw a foul. But Tornes ran into traffic and dumped the ball to Saucier, who made the dramatic shot to end the contest.

“Coach had drawn up a play, but I was telling Eonte, when you drive, look for me in the corner,” said Saucier, a senior. “Once he drove, he kicked it to me, I pump-faked to the right and pulled up and shot it. It was good, and it felt good. It felt good to win this game.”

The Big Reds made things hard on themselves by digging an early hole in the game. They missed their first four shots from the floor, allowing the Falcons to grab an 8-0 lead.

Muskegon was ice cold throughout the first quarter, missing 9 of 12 shots from the floor and three of six free throws, and trailed 20-9 at the first buzzer.

East Kentwood opened the second quarter with a 6-2 run with a pair of triples by Christopher Brown and led 26-11 with a minute off the clock.

But the Big Reds started pressed and playing tough defense and narrowed their deficit to 32-26 at halftime.

The Falcons opened the third quarter with another 6-2 run, paced by a triple and a steal and layup by Brown, and led 40-29 with a minute gone. 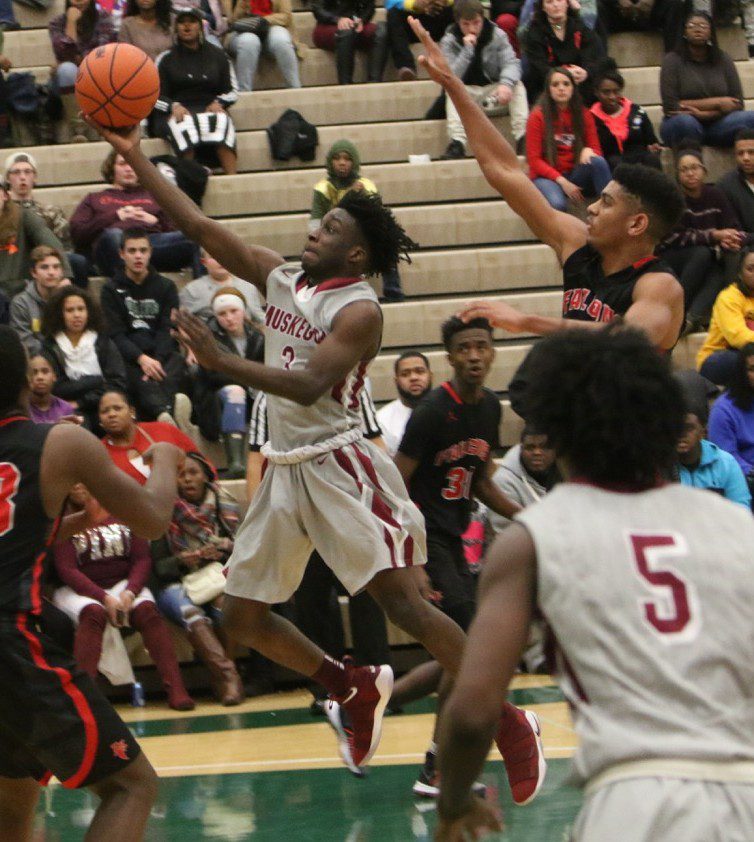 But Muskegon continued to battle. The Big Reds pulled within two points, 46-44,with three minutes left in the third. East Kentwood extended its edge to 51-44, then Muskegon answered with an 8-0 run to take its first least of the game, 52-51, with 42 seconds left in the third.

Vern Nash hit a 3-pointer for Muskegon with 18 seconds left in the third, and the Big Reds had a 55-51 edge going into the fourth.

Edriese Jenkins scored 12 points in the third quarter for Muskegon while and Saucier added eight.

The final quarter was filled with missed shots and fouls by both teams. The score was tied 59-59 with 2:30 remaining and 61-61 with one minute left.

Muskegon called time out with 55 seconds remaining, then Tornes stood dribbling the ball just inside the half court line,  before driving toward the lane.

Tornes ran into traffic and dumped the ball to Saucier, who hit the game winner with 1.8 seconds left and sent the Muskegon crowd into a frenzy. East Kentwood got a time out and managed to get a final shot off, but it missed the mark. 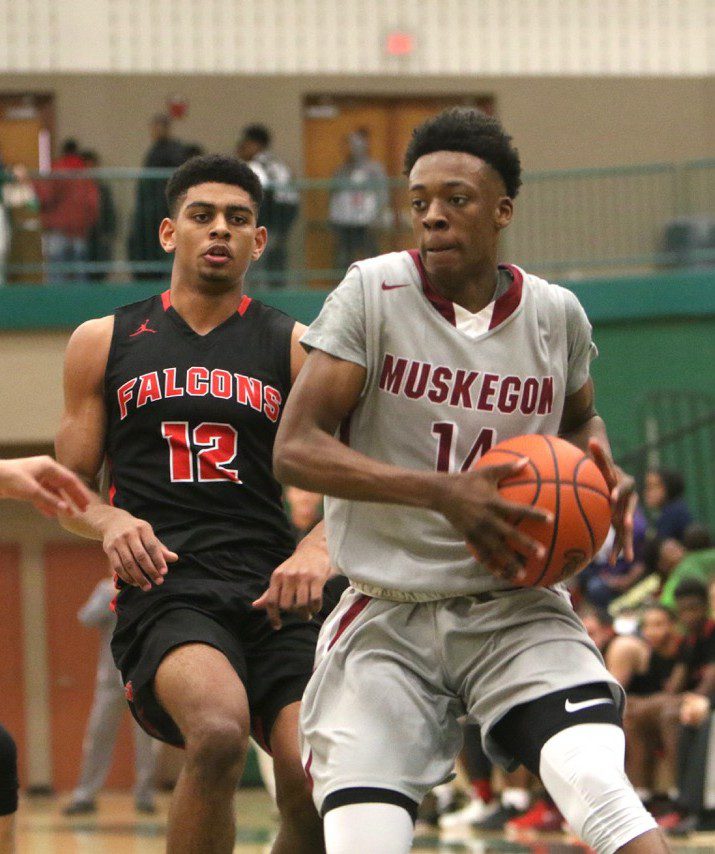 Edriese Jenkins looks to bounce to the hoop past East Kentwood’s No. 12 Justin Lary. Photo/Joe Lane

East Kentwood committed a slew of fouls throughout the contest, sending the Big Reds to the free throw line repeatedly. Muskegon was not impressive from the line, missing 16 free throws, but still converted 21 shots that were useful in the end.

East Kentwood was led by Ja’moni Jones with 20 points while Justin Lary had 11 points and D’Avery Moore chipped in 10 points.

Muskegon Coach Keith Guy was satisfied with the effort and the victory, particularly after the loss in Grand Haven last week.

“I was interested to see how we would respond to the loss,” Guy said. “I wondered if we were going to fight tonight, and we did. We got down big and kept fighting.”

Guy stressed that the season is young and he has four new starters, so the team will need time to fully develop.

“It was only our third game, and it was their sixth,” the coach said. “We have a lot of holes to fill after losing four starters to college basketball. We have some great replacements, but we knew it was going to be a slow start.”