NORTON SHORES – Reeths-Puffer’s Lauren Ross is only a sophomore, but on Tuesday she shined like a pressure-tested senior.

Over the final 19.7 seconds of the Rockets’ showdown with archrival Mona Shores, Ross hit three of four free

The game was close throughout and went down to the write, just like so many other games between the two teams over the past few seasons.

Mona Shores’ Megan DeLong scored her lone basket with 34.1 seconds left in the contest to give the Sailors a 33-32 lead. 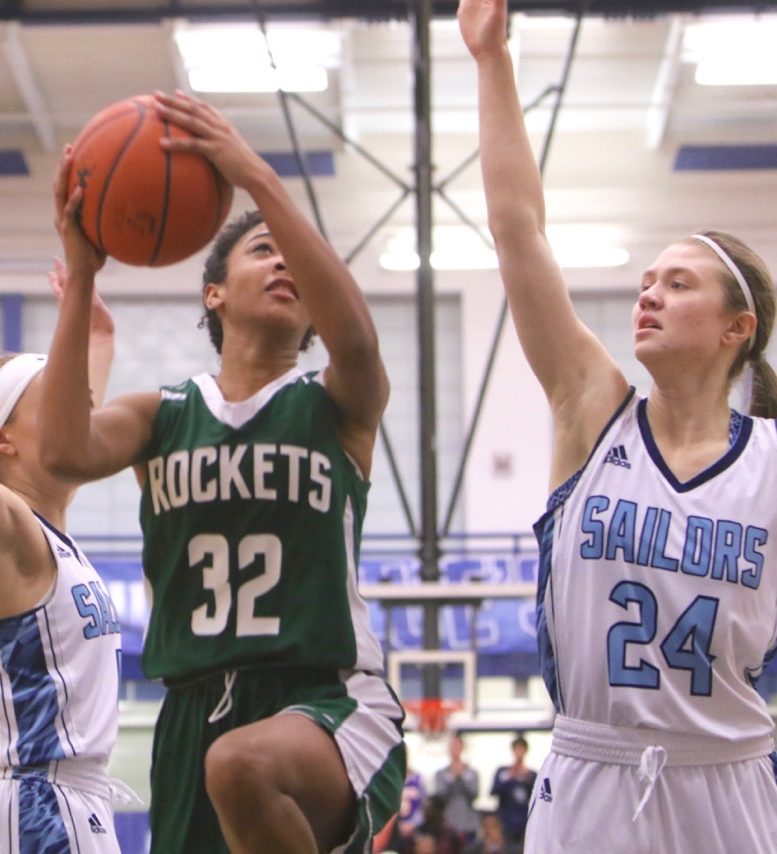 Trina Lewis goes up for the shot while Mona Shores’ Veronica Kastelic looks to make the block. Photo/Joe Lane

That’s when Ross took over.

With 19.7 seconds remaining, Ross was fouled on a drive to the basket. She calmly stepped to the line and nailed both free throws in front of the Mona Shores student section, giving the Rockets a 34-33 lead.

After a Rocket defensive stop, Ross was fouled with 5.3 seconds remaining and made one of her two free throws, giving Reeths-Puffer its final advantage.

Julia Tierman got a three-point shot off for the Sailors before time expired, but it missed the mark and the Rockets escaped with the road victory.

Ross claimed that she wasn’t nervous during her pressure-filled trips to the free throw line.

“Not really,” she said. “You just have to know you can make the shot and get out of your own head while believing in yourself.”

Reeths-Puffer Coach Brandon Barry said Ross is the player he wants at the line in pressure situations.

“I’m just always a little nervous for her, because I know how much pressure she puts on herself to perform for us,” Barry said. “But you don’t really want anyone else on the line in those moments, because she’s such a competitor.”

The game started out as a defensive battle with each team struggling to score in the first quarter. Mona Shores led 6-3 at the first buzzer and 15-14 at halftime.

The teams traded buckets in the third quarter, and the score was tied 24-24 heading into the fourth.

Mona Shores started strong in the fourth, opening the quarter with a 6-0 run behind a layup and free throw from Veronica Kastelic and a three-pointer from Ryleigh Wehler.

But the Rockets responded with a 6-2 run in the final 2:15, including Ross’ clutch free throws, to seal the victory.

Mona Shores Coach Brad Kurth said his team may not have brought the energy it needed to the rivalry game.

“We didn’t bring the attitude and effort tonight to fight through adversity,” Kurth said. “Obviously Reeths-Puffer really had some hunger, and today I think in moments we did, but we really didn’t have a chip on our shoulder, and we just played to survive.

“They deserved to win that game and we didn’t.”

Mona Shores was led by Kastelic with seven points while Wehler and Tierman each finished with six. 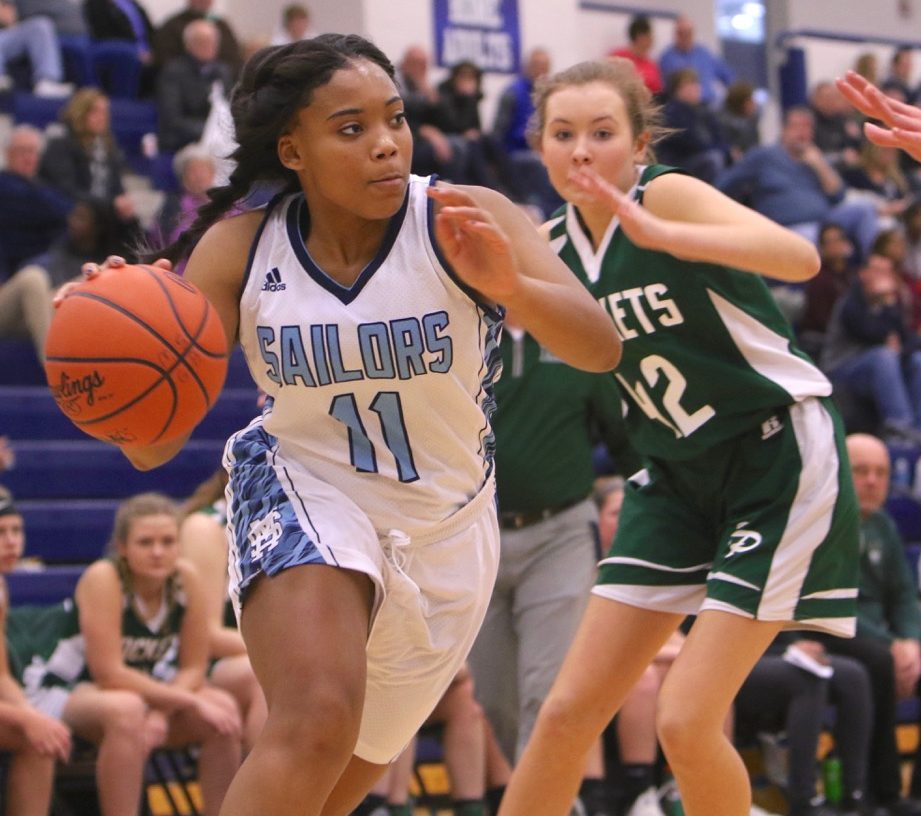 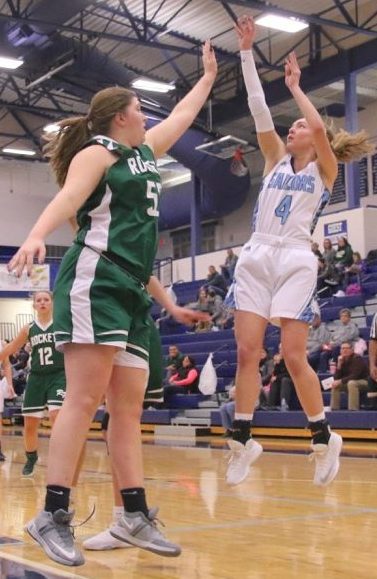 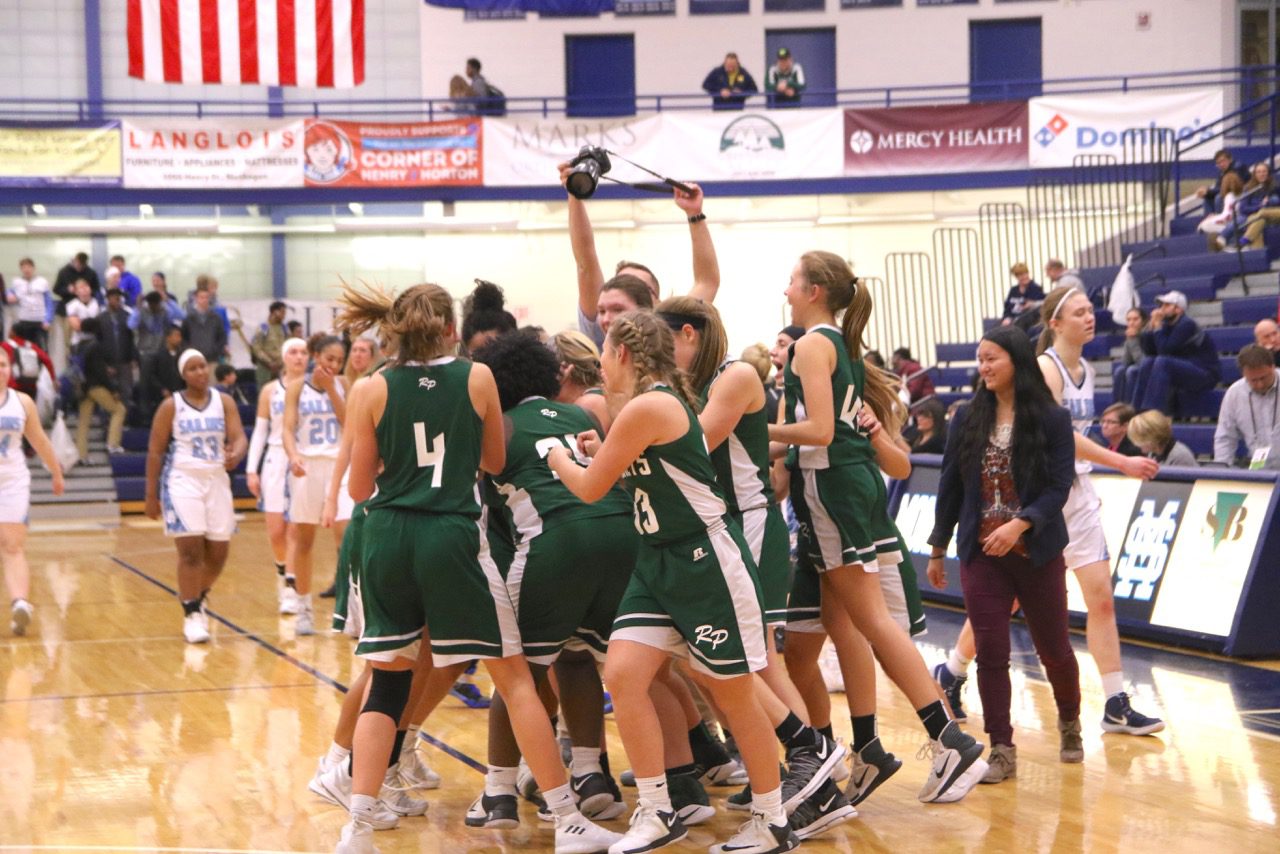 Reeths-Puffer storms the court to celebrate the win. Photo/Joe Lane

Lauren Ross looks down for the loose possession. Photo/Joe Lane 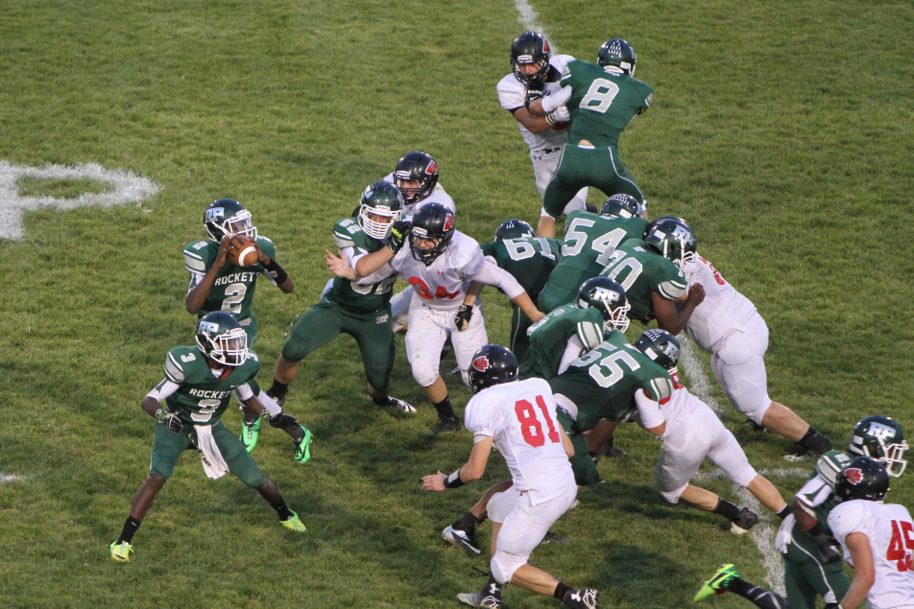