MUSKEGON – The Muskegon Lumberjacks are finally healthy, with all of their best forwards ready to roll.

It started with the return of Jachym Kondelik, who has been lighting up the scoreboard

since returning from the injured list in late January.

Kondelik, who started the season as one of the Jacks’ top scoring prospects, left the team in early December to play for the Czech Republic team in the World Junior “A” Challenge tournament in Canada.

He completed that tournament, then immediately got a tryout with the Czech Republic team that was preparing to compete in the World Junior Championships in Buffalo, New York.

But in an exhibition game before that tournament, he was hit from behind and dislocated his collarbone. That meant going home to Europe for treatment for the next month or so, and hanging around the house a lot.

Under normal circumstances, Kondelik would have at least enjoyed visiting with his parents during his down time. Unfortunately they weren’t home. 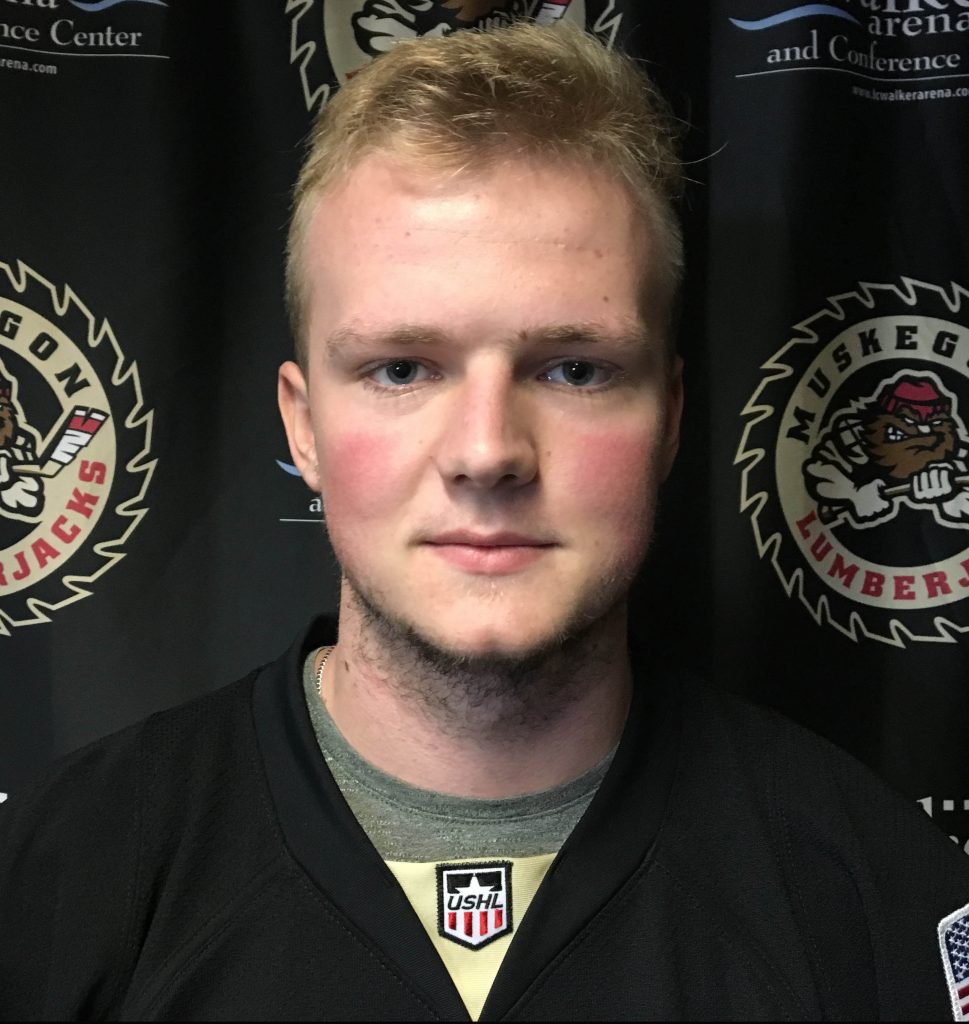 They had traveled to Buffalo to watch him play in the World Junior Championships. Their return flight wasn’t until Jan. 10, so they were left to poke around in the U.S., unable to watch their son play hockey, because he was back home recovering.

“I was home alone for two weeks, but my sister, who lives in Germany, came home to see me, and I spent a lot of time with my grandparents, who live nearby,” said Kondelik, 18, a big player who stands 6-7 and weighs over 200 pounds. ‘It’s not like in the U.S., where everything is 18 hours away.”

Kondelik finally got to see his parents for about a week and a half before returning to Muskegon. In the meantime, he conditioned as hard as he could while his collarbone healed.

His efforts clearly paid off. Kondelik has tallied five goals and four assists in 10 games since he returned to the Lumberjacks on Jan. 26.

He was at his best last weekend out west, scoring two goals in Friday’s 5-2 victory over Cedar Rapids, and another goal on Saturday, when the Jacks fell 5-3 to Des Moines.

“They always say that everything bad that happens is good in one way or another. This will give me more power for the playoffs.”

Lumberjacks Coach John LaFontaine said Kondelik returned with a renewed commitment to be more aggressive around the net.

“He’s made it a focus to go to the net to shoot the puck more, take a quicker shot and focus on the net,” the coach said. “He’s not trying to overpass, not passing up those shots. Because of that he’s having success.”

Kondelik and the Lumberjacks will have two important home games on Friday and Saturday against Sioux City. Puck drop will be 7:15 p.m. both nights at L.C. Walker Arena.

The good news is that the team will be at full strength for the first time in a long time.

Since the fall, the Jacks have been missing at least one key forward – and usually several at a time – due to injuries. 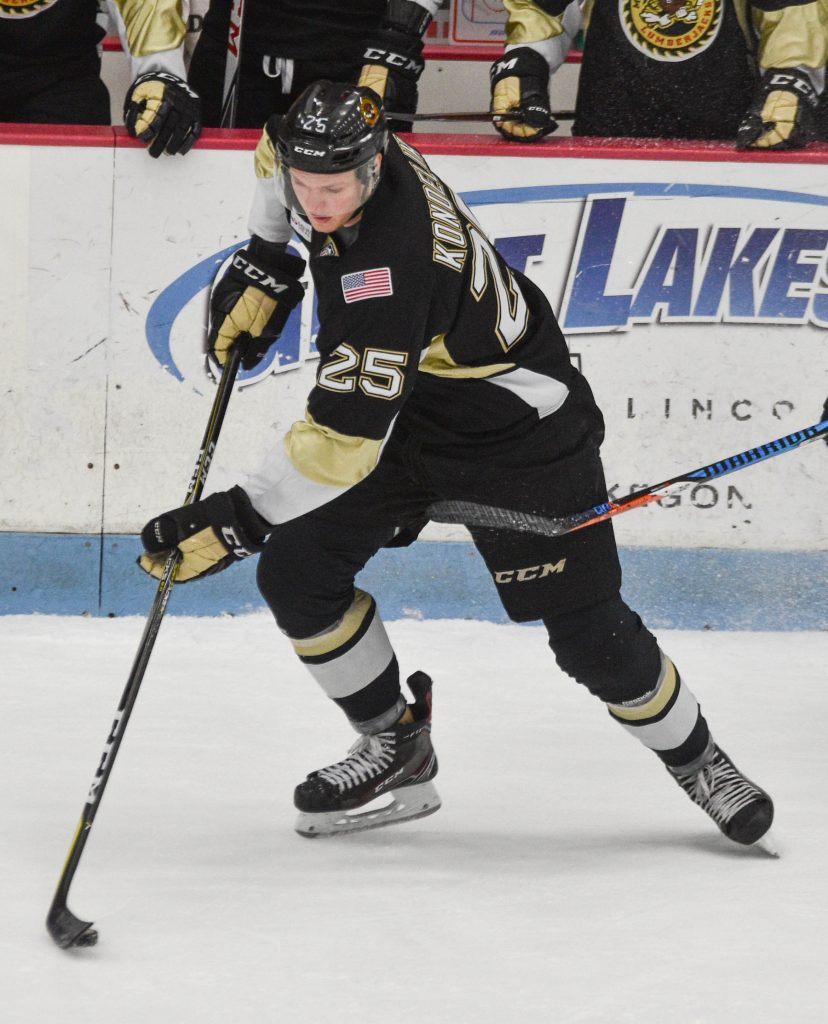 Kondelik tries to control the puck while being hooked by an opponent. Photo/Mitchell Dixon MSD Photography

Kondelik returned Jan. 26, but by then talented forwards Mikael Hakkarainen and Wyatt Bongiovanni were both on the injured list for the second time this season.

Hakkarainin and Bongiovanni will both be back this weekend. That means the team will have all of its top-scoring forwards – Anthony Del Gaizo (49 points), Matej Pekar (36), Emilio Pettersen (31), Hakkarainen (27), Bongiovanni (24). Vincent de Mey (20), Kondelik (18) and Monte Graham (17) – healthy and ready to go.

Only Del Gaizo and Pettersen have played in all 42 games this season. Graham has played in 41 and Pekar in 40. Vincent de Mey has played in 42 games, but started the season with Green Bay.

Kondelik has played in 27 games, Bongiovanni 26 and Hakkarainin only 20.

Even LaFontaine struggles to remember when all of his forwards were available at the same time.

“Bonjo said he hasn’t played with Hakk since October,” the coach said. “I thought they had played a couple games together – but then Kondy went out. It might be since the beginning of the year that all three of those guys have been in the lineup together.

“When you’re talking about some high-end players, capable of really impacting the game, it’s nice to have those guys back together.”

Both of this weekend’s games – and pretty much every game through the rest of the season – will be crucial for the Jacks. They are currently 22-18-2 and in fourth place in the USHL’s Eastern Conference with 46 points (two points for a win, one for a tie or overtime loss).

But the conference race is extremely tight.

The Lumberjacks are only three points behind first-place Team USA and Youngstown (49 points apiece) and only two behind third-place Dubuque (48).

On the other hand, the Jacks are almost as close to missing the playoffs as they are to being in first place. The top six teams in the conference will make the postseason, and sixth-place Chicago is only four points behind Muskegon, seventh-place Madison is only five behind, and eighth-place Cedar Rapids is only seven behind.

There are 18 games left in the regular season.

LaFontaine said the only way to deal with the tight race is to focus on the immediate task at hand.

“For us, it’s been about being focused on one game at a time,” he said. “It’s hard to focus on the standings. You can win two and be in second place, then lose two and be in sixth. It’s going to come down to the teams that have the best second-half stretch. You want to peak at the right time.”

While the Lumberjacks are in a tight race in the standings, Anthony Del Gaizo is in an equally close battle for the USHL scoring championship.

Del Gaizo has a more comfortable edge in the league goal scoring race. He his five ahead of Cates, who is second in the league with 25. 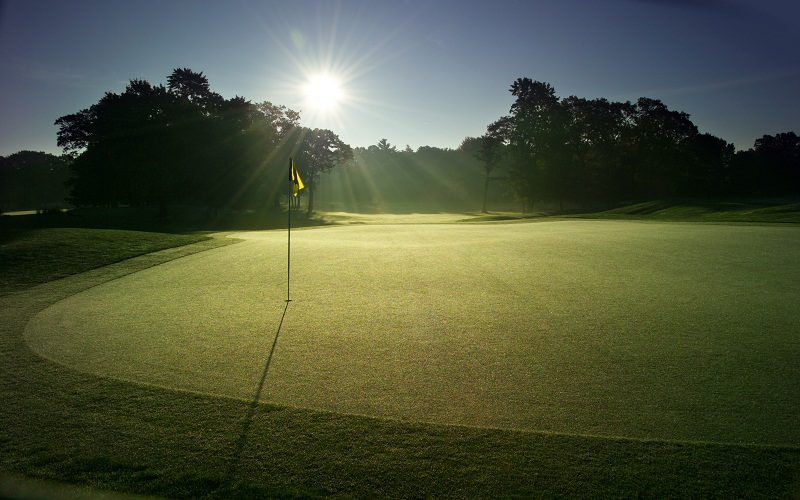