More specifically, how Muskegon’s defense applied it and how its offense handled it.

Clinging to a tight three-point lead, the Big Reds hit five of six free throws in the final minute to hold off host Grand Haven 37-34 and claim the district title.

Muskegon improved to 20-2 on the season and advanced to the Class A regionals at Zeeland East High School on Tuesday at 6 p.m. The Big Reds will face Caledonia.

“It’s a huge win,” said Big Reds Coach Rodney Walker. “I’m really happy for the girls. All the work that they put in, it wasn’t easy, but it was worth it.”

Trailing 32-29 with 1:28 left in the game, Grand Haven had its hands full trying to come back. That was made all the more difficult when its top player, Alli Keyser, fouled out. 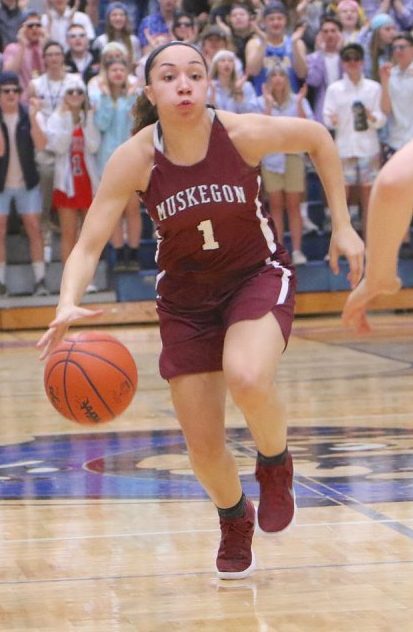 Muskegon’s Alyaz Winston pushes the ball across half court to set up the play. Photo/Joe Lane

From that point on, Muskegon was happy to stall and try to run the clock out. Grand Haven countered that strategy by fouling Big Reds guard Alyza Winston on three straight possessions.

The pressure didn’t get to the junior, who calmly buried five of six free throws in the final 58 seconds to ice the title for Muskegon.

In a back-and-forth battle, Grand Haven used an 8-0 run in the middle of the first quarter to take a 10-7 lead after one.

But the Big Reds’ full court press began to create turnovers in the second quarter, allowing the Muskegon transition game to get rolling.

Back-to-back Bucs possessions resulted in turnovers and fast-break layups for Daz’sha Day, and Muskegon went to the locker room with a 20-16 halftime lead.

“We came out and played hard defensively,” said Day, who scored eight of her game-high 14 points in the second quarter. “We knew to win we had to run, get steals and hit our open layups.”

The Bucs stormed out of the locker room and scored the first five points of the third quarter. They took a 21-20 lead on Anna Strom’s 3-pointer.

But a chance to build on that advantage disappeared with a Day steal and layup, which gave the Big Reds the lead for good, 22-21. Muskegon had a 26-23 advantage heading into the fourth quarter.

“They were the better team tonight,” Bucs coach Katie Kowalczyk-Fulmer said. “We were uncharacteristic with the ball and the turnovers. We had 18 turnovers, and when they get those easy baskets, it plays to their advantage.”

Grand Haven finished the season with a 14-8 record. 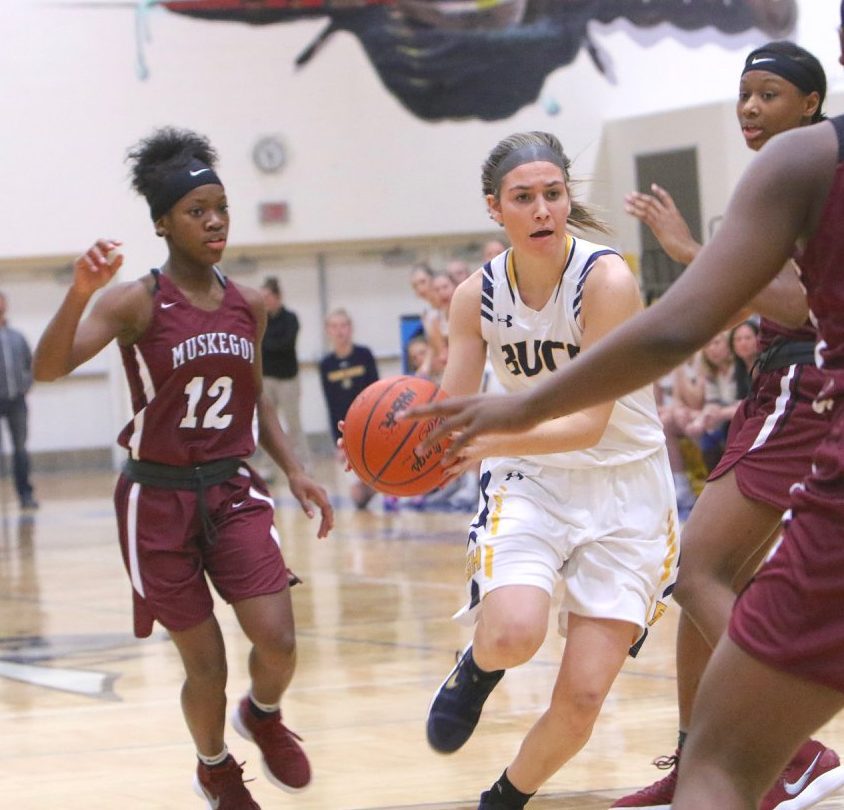 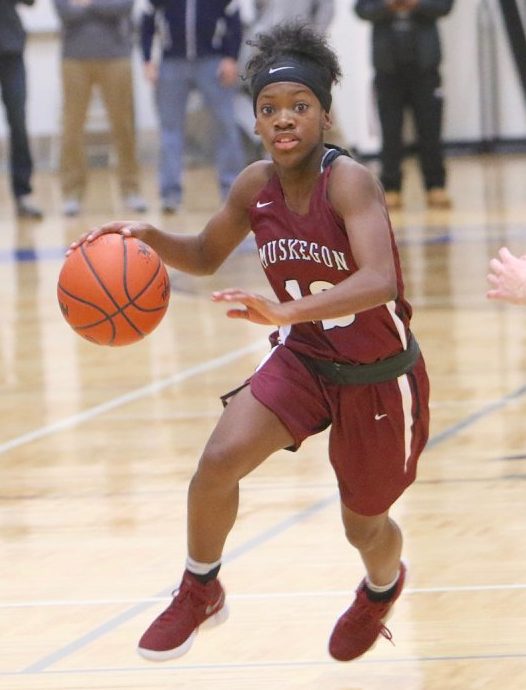 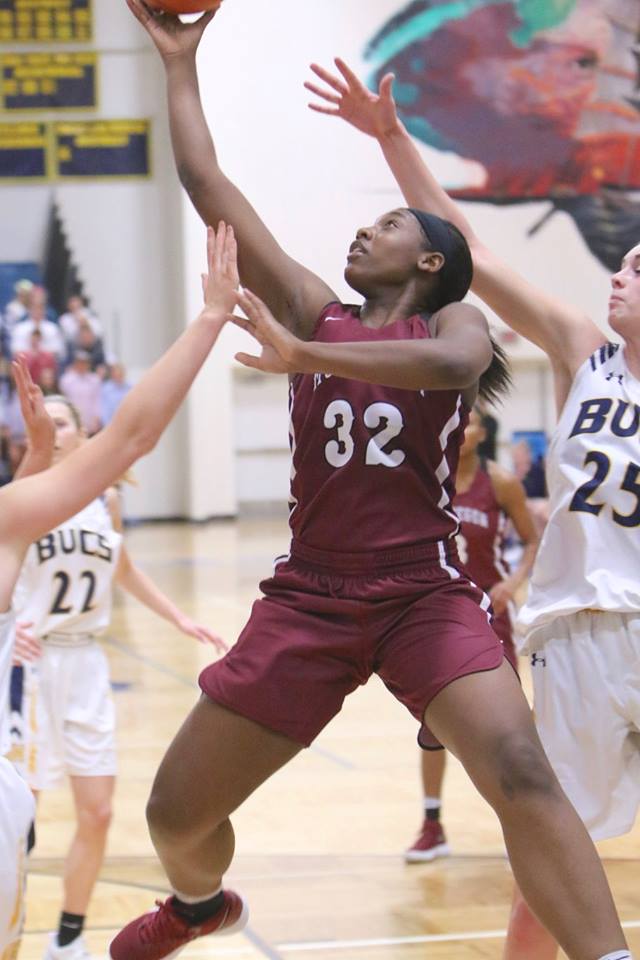 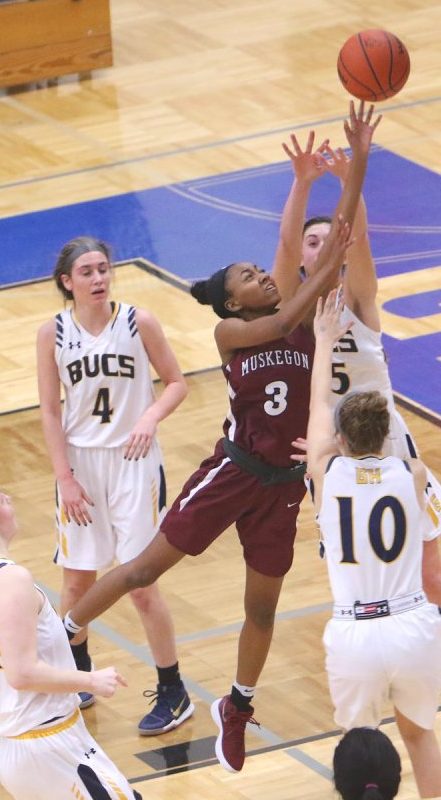 Daz’sha Day goes to the hoop for Muskegon. Photo/Joe Lane 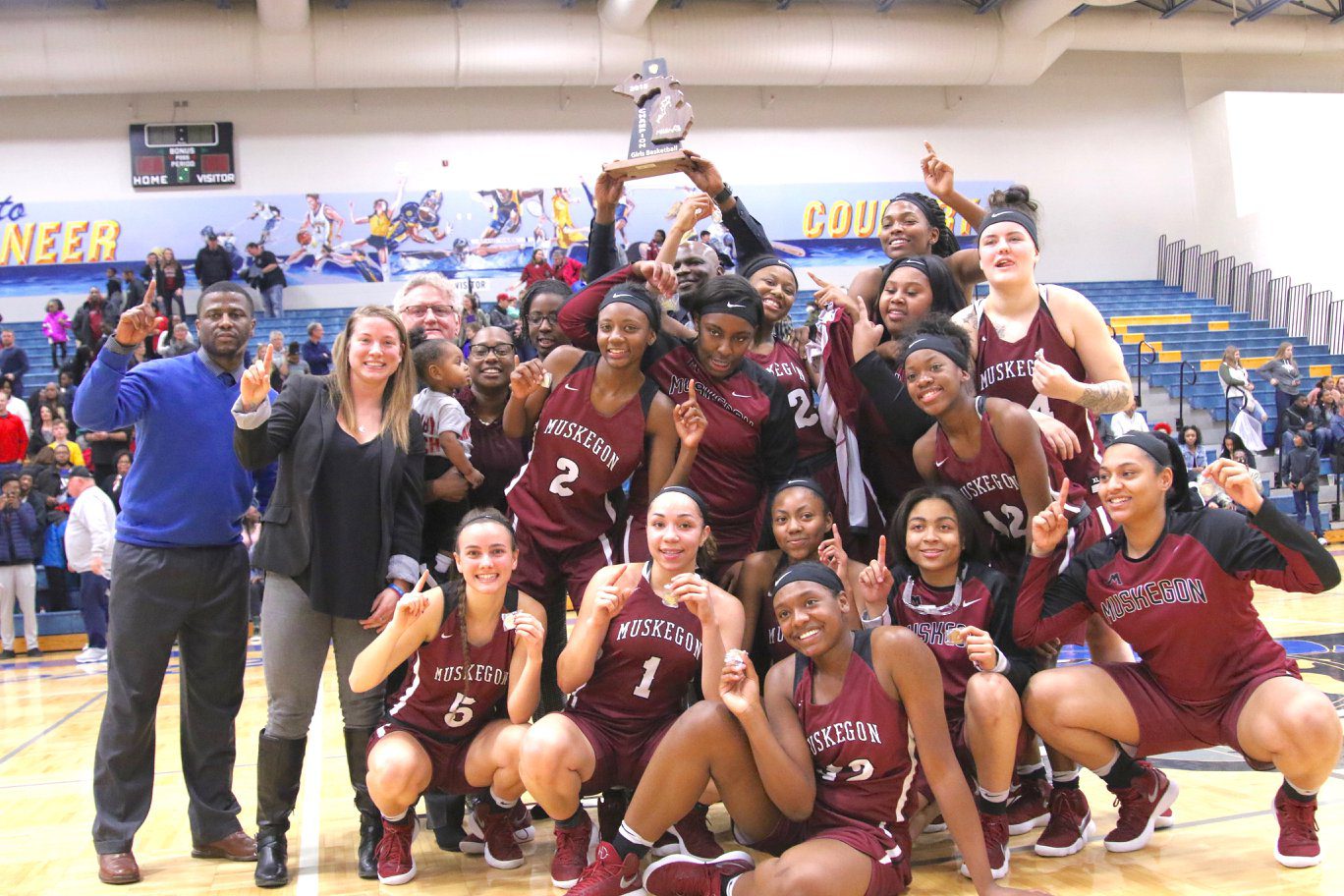