Many of the team’s best players will be back on the court next season.

But the Eagles’ dream of an appearance in the state final four will have to wait at least until then.

The Eagles, who have been on a pretty impressive tournament run over the past two weeks, saw their season come to a close in a 45-30 loss to Pewamo-Westphalia in the Class C girls state quarterfinals at Cedar Springs High School on Tuesday.

The Eagles only have three seniors on their roster, and will return their top eight rotation players next season.

But on Tuesday, they faced a more experienced team that lost in the state finals last season, and seems determined to give it another shot this weekend. 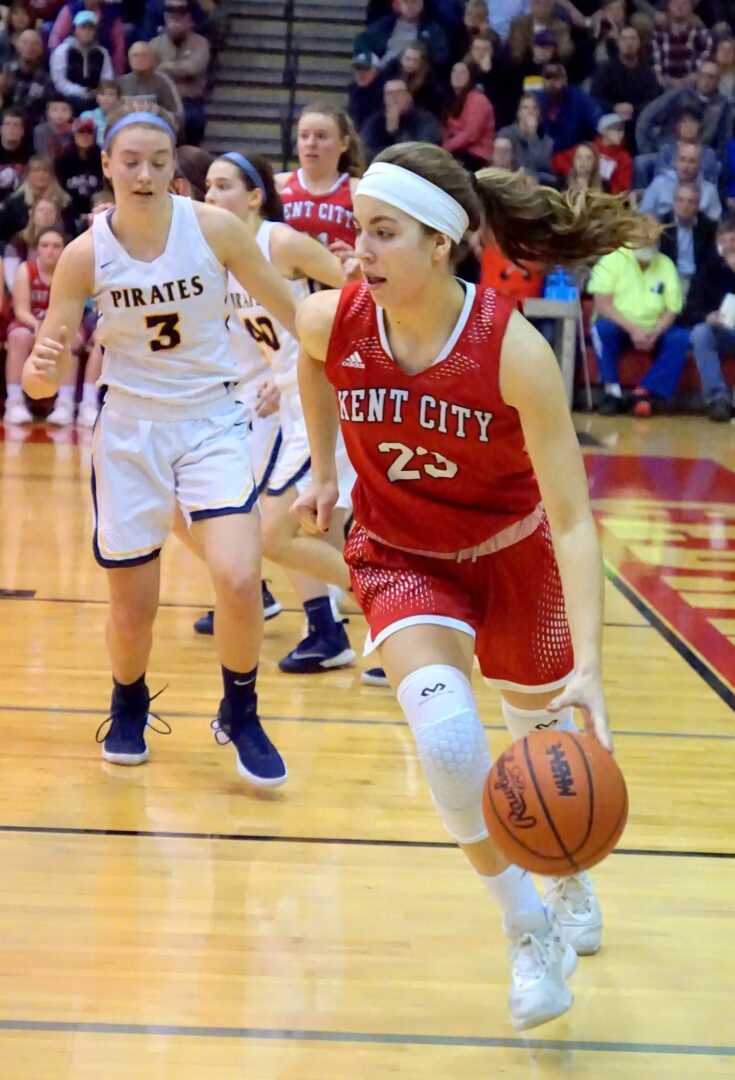 Kenzie Bowers tries to dribble out of the corner for Kent City. Photo/Leo Valdez

“They’ve been here before,” said Kent City coach Scott Carlson about Pewamo-Westphalia. “They’ve been to the state finals, and I thought they handled the pressure a little bit better than we did. But that’s to be expected for a team with three freshmen.”

The experience difference showed in the first quarter Tuesday, when the Pirates started the game on a 9-3 run before a Kent City time out midway through the quarter.

Kent City remained within shooting distance of the Pirates, training 12-5 at the first buzzer.

The Eagles were outscored 11-5 in the second quarter and trailed 23-10 at halftime.

Kent City opened the second half with a 7-2 run sparked by Zara Weber, who scored all seven points. That made the score 25-17, and there seemed to be hope for the Eagles.

“I thought we settled down and made a couple runs at them,” Carlson said. “The girls responded, and I’m thrilled to see that, because I thought they showed potential for next year to be a really, really good team.”

The comeback attempt fell short for the Eagles, who trailed 34-19 by the end of the third quarter. 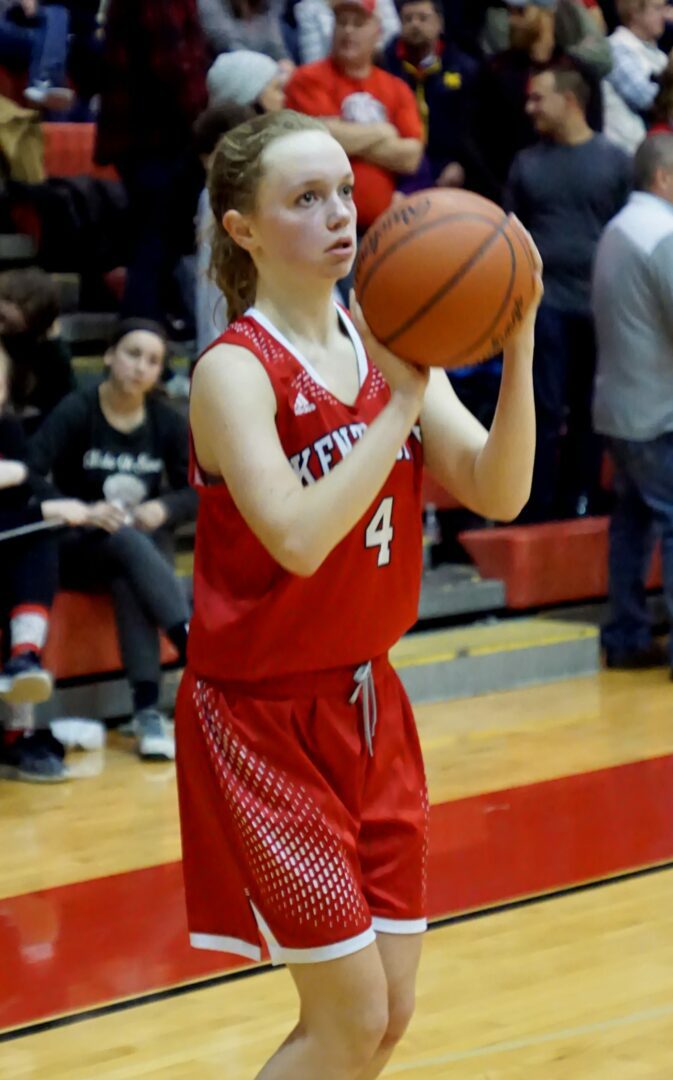 Jenna Harrison spots up from the corner for Kent City. Photo/Leo Valdez

Bowers attempted to keep her team in the game in the fourth quarter, scoring eight of her 12 points down the stretch. But solid ball-handling and free throw shooting allowed the Pirates to hold on to the lead and seal up a berth in the state semifinals.

Defense was a bright spot for Kent City. The Eagles held Grand Valley State University commit Emily Spitzley to five points on the night, which Carlson said was part of their game plan.

“She seems to be their leading scorer, so we tried to make it tougher on her,” the coach said. “We did a good job for the most part. But their point guard (Ellie Droste) made it tough on us. She’s cat-like quick.”

The Pirates, who only had three turnovers on the night, finished with three double-digit scorers. Hannah Spitzley and Droste had 13 points apiece while Rachel Huhn totaled 10,

Pewamo-Westphalia will face Detroit Edison in the semifinals on Thursday, in a rematch of the 2017 state title game.

While Bowers is happy with the season her team had, she believes this loss will be remembered, and will inspire the Eagles next season.

“It’s really hard,” said Bowers about the season coming to an end. “Obviously we wanted to keep going to the semis and win that to get to the finals. But I know it’s nothing to hang my head about.

“It’s something I have to just hate so much that it keeps me working hard into next year.” 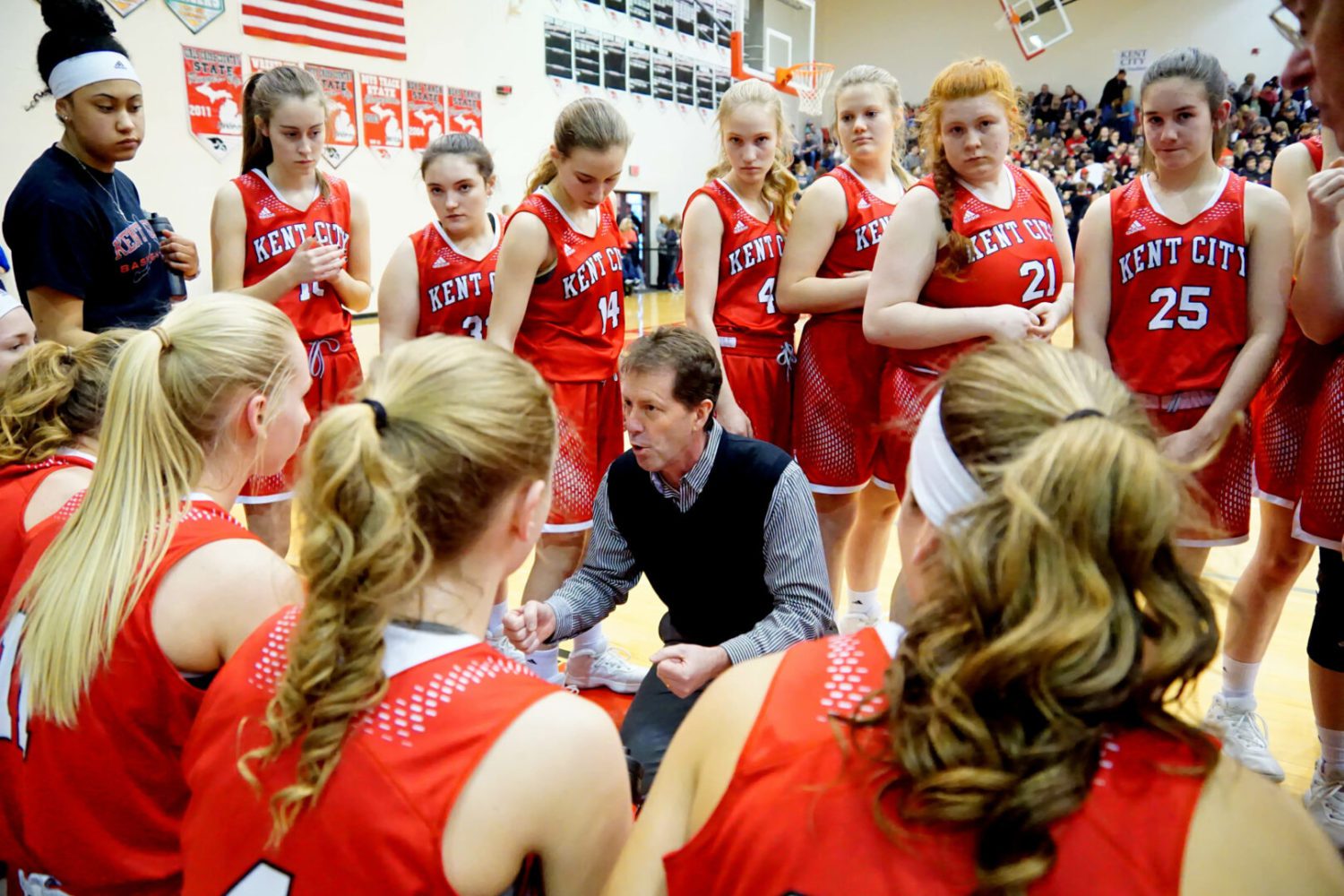 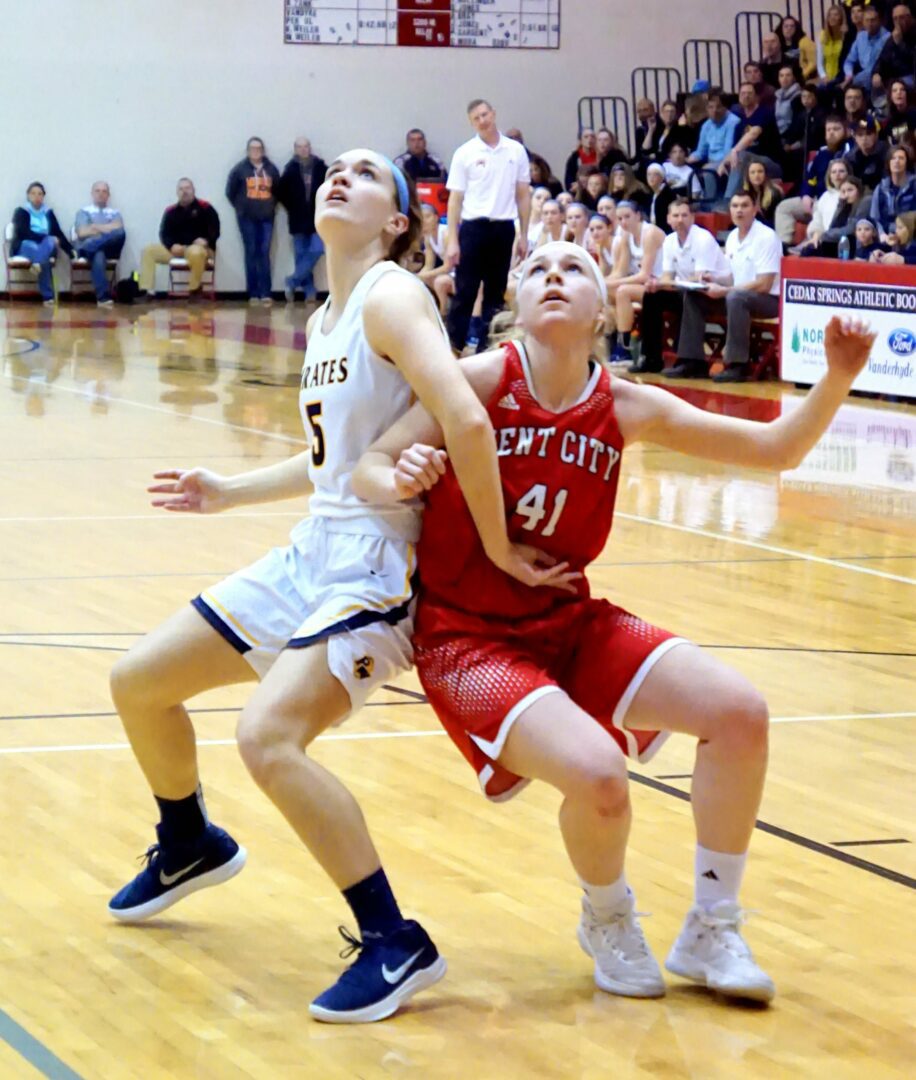 No. 41 Mikayla Loew boxes out and looks for the rebound for Kent City. Photo/Leo Valdez 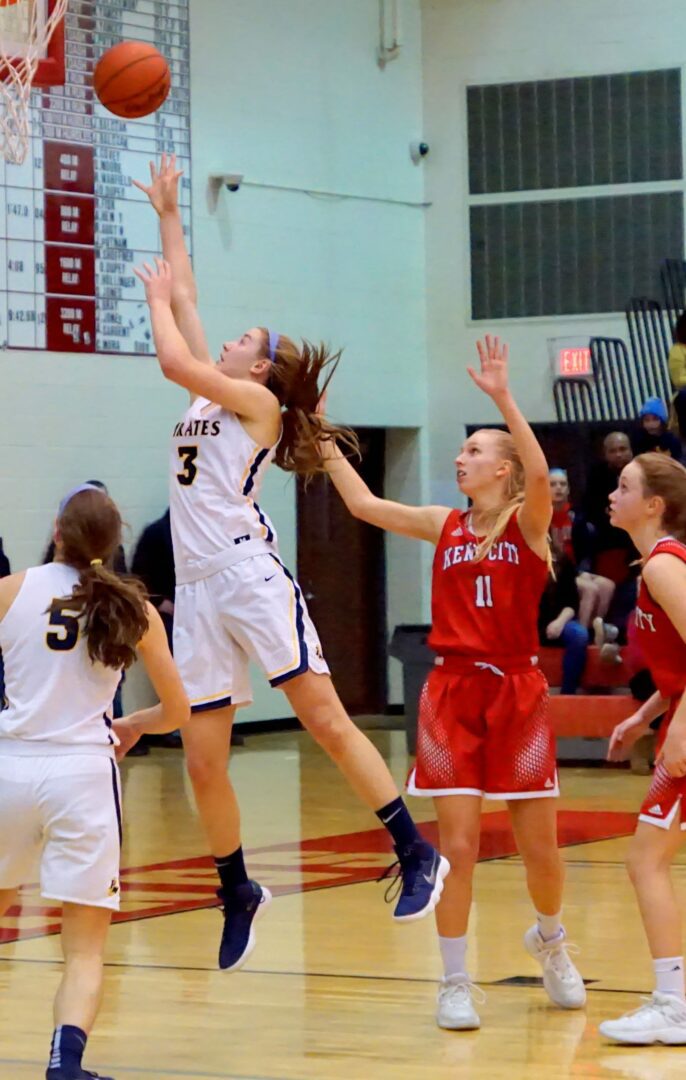 Kent City’s No. 11 Zara Weber watches as a Pewamo-Westphailia player gets to the hoop. Photo/Leo Valdez 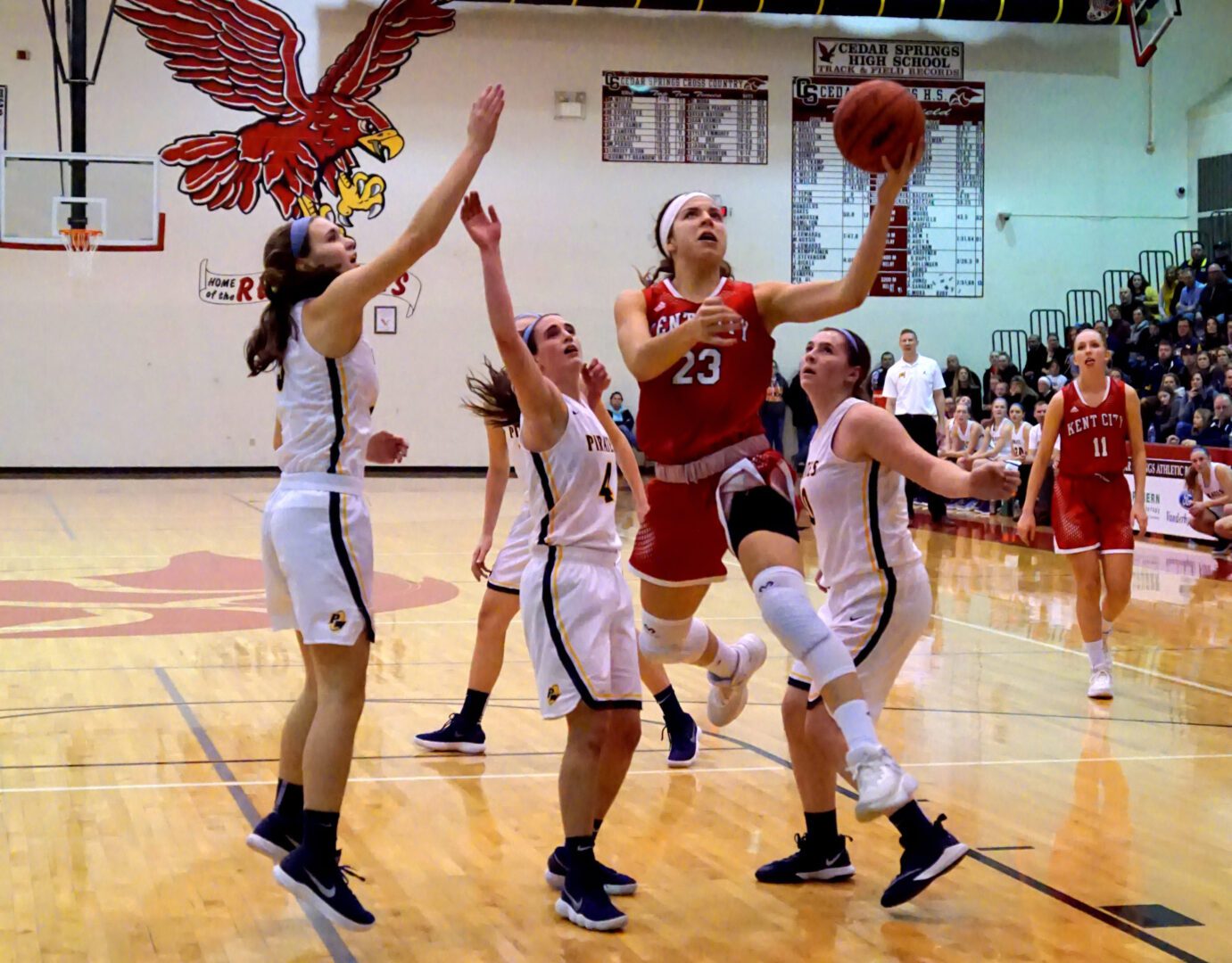 Kent City’s Kenzie Bowers goes in for the layup on the fast break. Photo/Leo Valdez 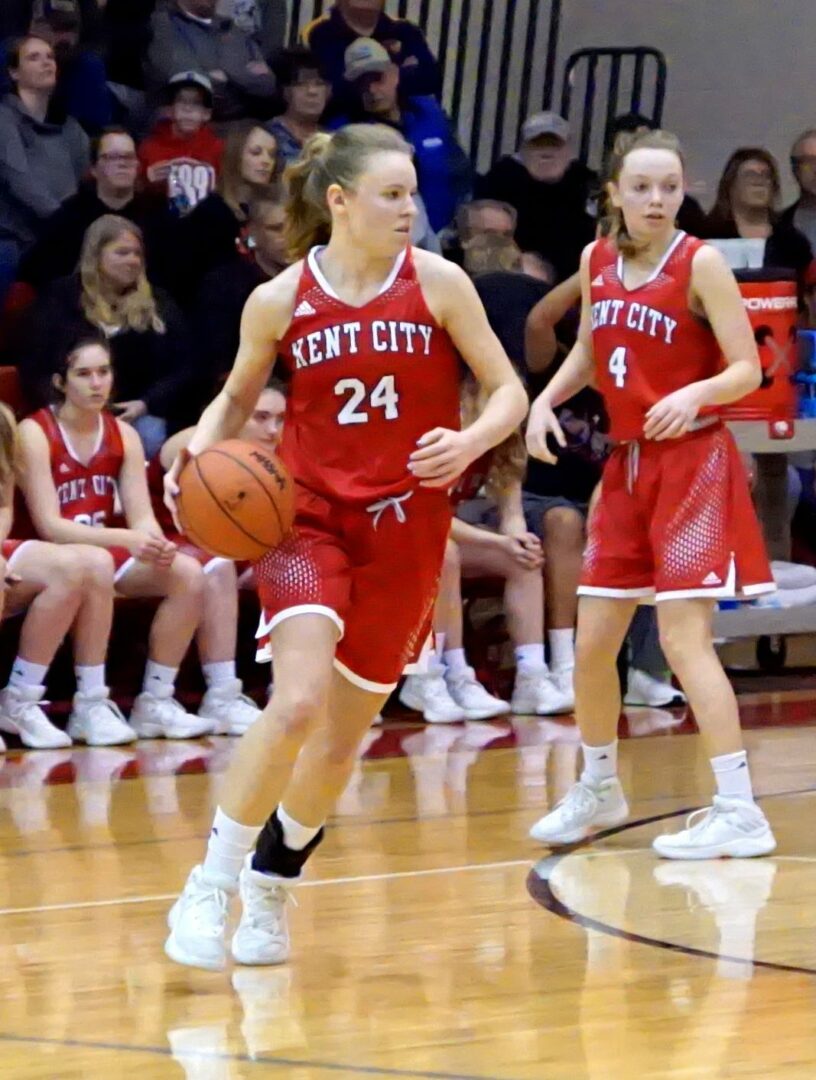 Kent City junior Lauren Freeland controls the ball at the top of the key. Photo/Leo Valdez

Montague volleyball team wins all three matches in a quad

Lumberjacks suffer their first shutout loss in more than a year, and lose their fourth straight, in a 4-0 loss to Green Bay