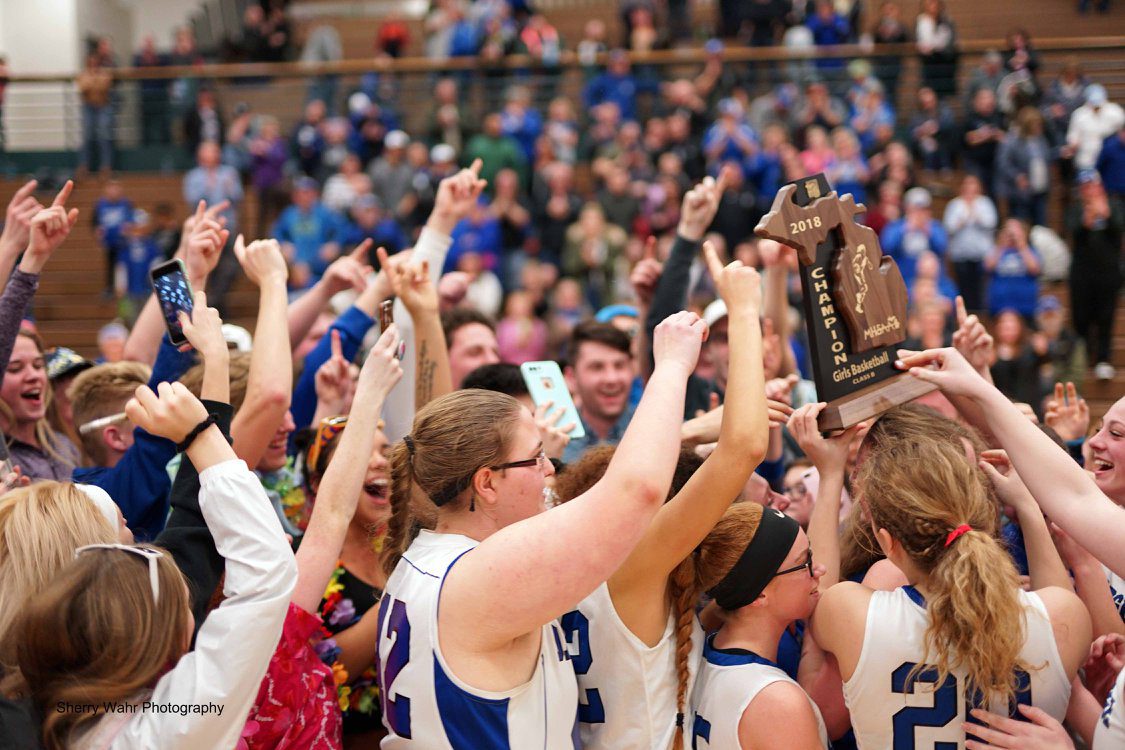 Those three words, spoken by standout junior Sophia Wiard, have been a long time coming for the Oakridge

Oakridge, now 22-3 on the season, advances to Tuesday’s state quarterfinals against undefeated Kingsley at 7 p.m. at Cadillac High School.

Despite playing in the regional round for the seventh time in nine years, this marks Oakridge’s first title since 1992. Wiard’s mother Renee was a member of that team. 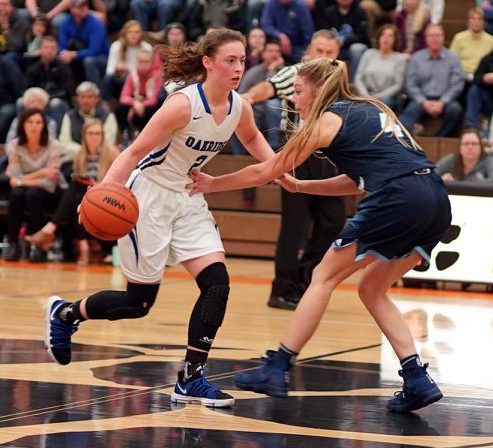 Sophia Wiard brings the ball up the floor for Oakridge. Photo/Sherry Wahr

“First of all, she can’t brag about it as much she used to,” Wiard laughingly said about her mom. “Now I can say I won a regional. It’s a really big deal. I couldn’t be more proud of my teammates.

“I can’t tell you how much I wanted to win this game. It leaves a mark (on the program). Holding that big trophy is a lot nicer than holding that district one. I’m so happy.”

Eagles head coach Terry DeJonge was in disbelief after the game.

“Oh my gosh, it doesn’t even feel real,” he said. “Seventh time’s a charm. Having a win like that is just…I don’t even know. It’s surreal right now.”

The Eagles led for most of the game and held an 11-point advantage early in the fourth quarter. But GRSC made a late run and took a 54-52 lead on a three by Mackenzie Selvius with 22 seconds remaining.

Oakridge called time out with 10 seconds left to set up a play.

“It was kind of like ‘Hoosiers’,” DeJonge said. “We were drawing up a play, seeing about a screen and (Wiard) said, ‘I’ll make it.’ She just willed us to a championship.” 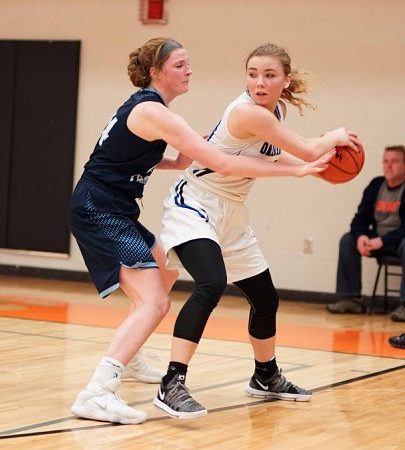 Oakridge forward Gracie Reinhold fights to get the ball out of the corner. Photo/Sherry Wahr

Wiard caught a pass near the opposite three-point line, drove the length of the floor, and spun in a layup as time expired to send the game to OT.

“I told Coach D that I need the ball, I’m going to make this,” Wiard said. “I knew my time has come and I was ready to hit that shot.”

Oakridge received a huge boost from Brianna Pastor. The sophomore guard made her first start of the season, replacing injured Jenna Lowry, and showed up big with six three-pointers, including one to start the overtime period.

“She stepped up time after time hitting those threes,” DeJonge said.

The Eagles’ Halle Jennings scored her only bucket of the game in overtime to extend the lead to 59-54. Wiard added four more points down the stretch to help close out the game.

The Eagles led by as many as seven points in the first quarter, but held just an 18-15 lead after one.

The Sailors tightened up defensively in the second quarter, allowing just seven points, and drew within one at 25-23 at halftime.

South Christian went on a 7-1 run to take the lead late before Wiard sent the game to overtime.

The Eagles did not sub the entire game, leaving the starters to play all 36 minutes.

“I was definitely feeling it towards the end,” Wiard said. “But I knew the final outcome would be a win if I kept working hard, and that’s really what kept me going.”

Wiard had 30 points to lead all scorers. Pastor added 20 for Oakridge, while Aaliyah Cooper had eight points and Gracie Reinhold totaled five. 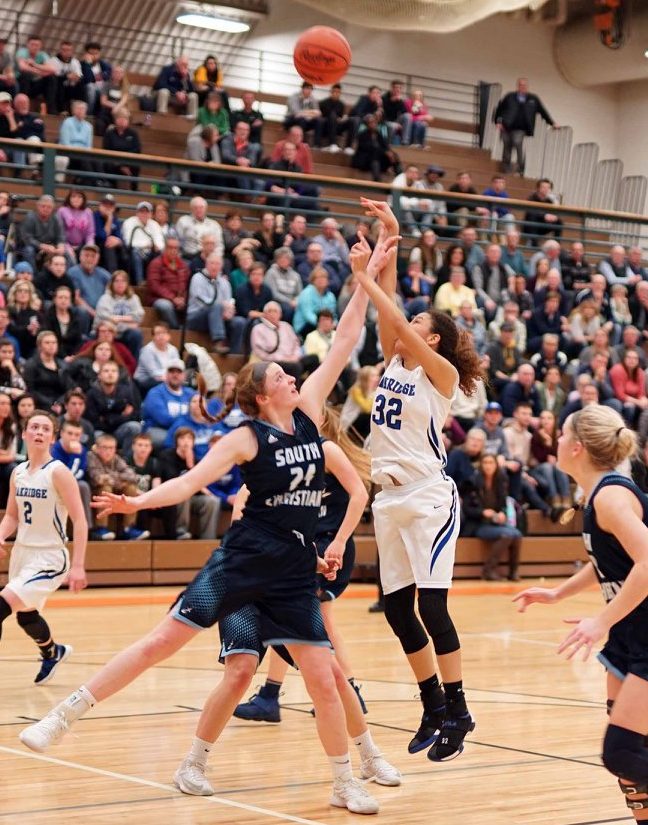 Aaliyah Cooper goes up for an Oakridge shot. Photo/Sherry Wahr 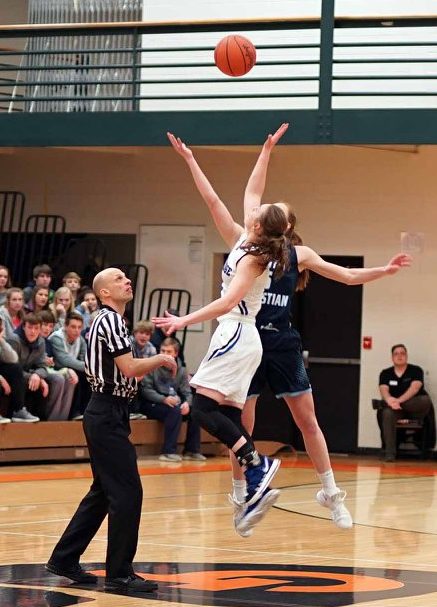 Sophia Wiard gets up for the opening tipoff. Photo/Sherry Wahr 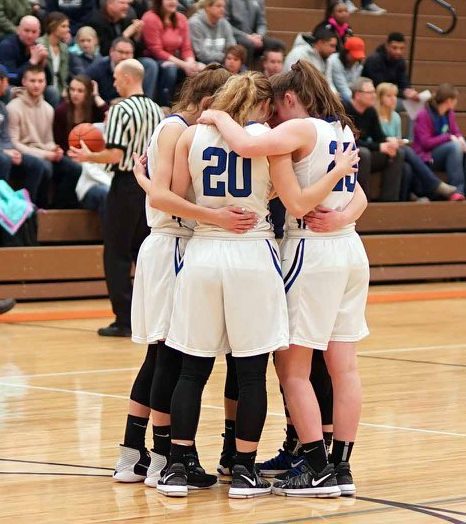 Oakridge players huddle at half court before overtime. Photo/Sherry Wahr 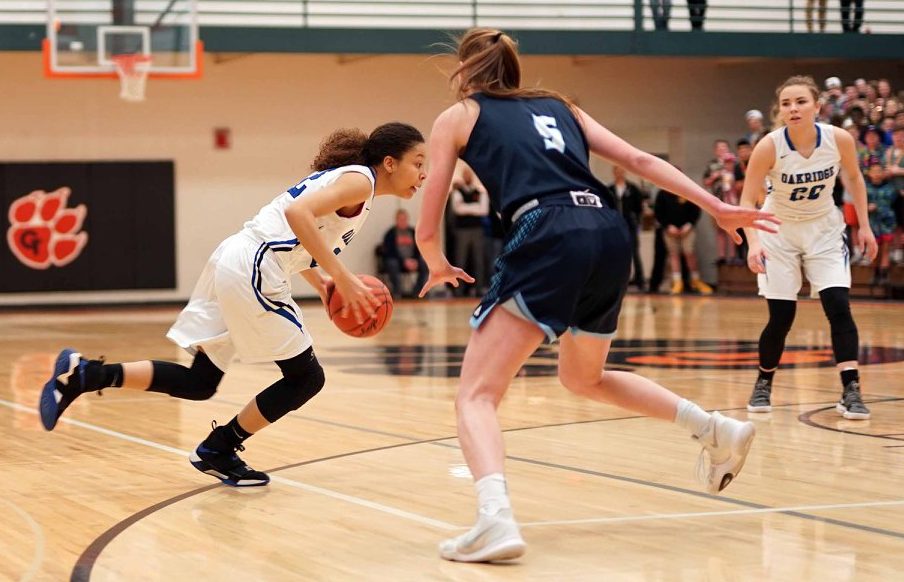 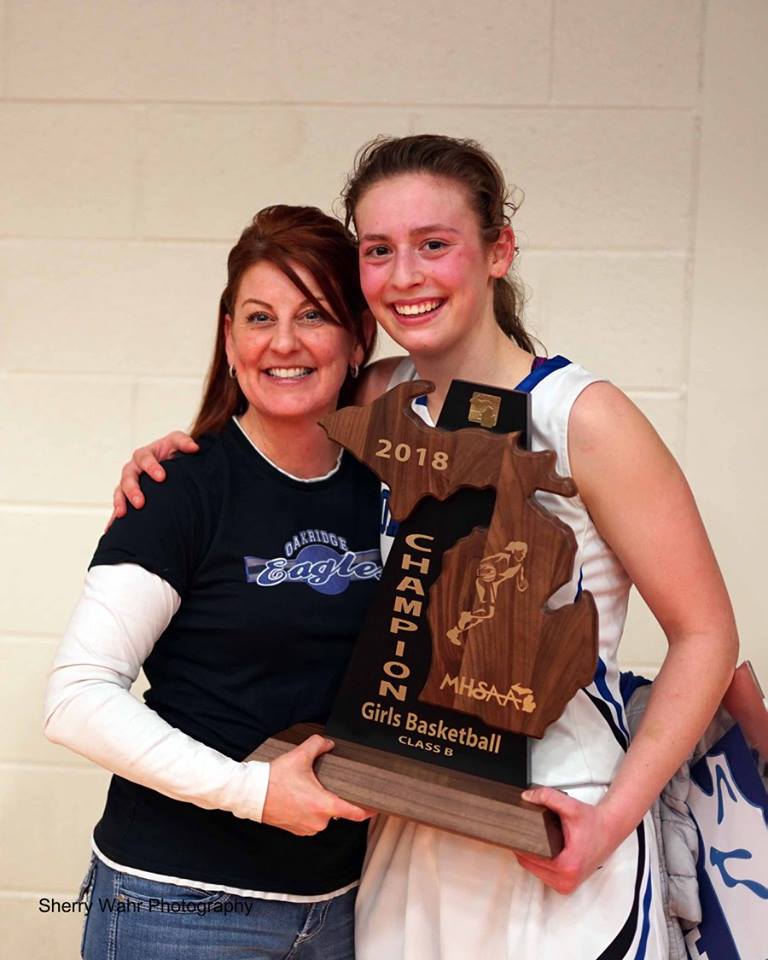 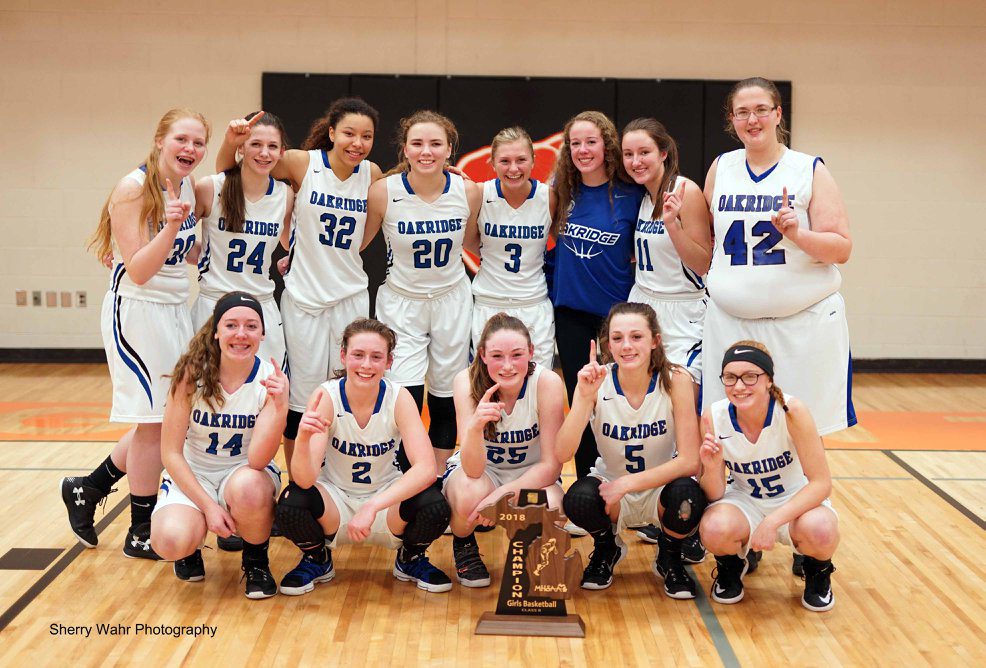