Jacks ready for regular season finale, quick playoff series, all in the next week

MUSKEGON – The end of the regular season, and the start of the Clark Cup playoffs, are all coming within the next four days for the Muskegon Lumberjacks.

But with a very challenging weekend ahead, the only thing the Jacks know for sure is that they will be hosting a best-of-three, first-round

The Lumberjacks, 32-24-2 on the season, are currently in third place in the USHL’s Eastern Conference, but not by much.

They have 64 points in the standings, just two more than third-place Green Bay and four more than fourth-place Dubuque. All three teams have two  regular-season games remaining, and they earn two points for a win and one for an overtime loss.

Either way, the Jacks will host a rapid-fire, first-round series, with all three games at L.C. Walker Arena on Monday, Tuesday and Wednesday (if necessary). Puck drop is slated for 7:15 p.m. each night.

Lumberjacks Coach John LaFontaine said he’s not crazy about the first-round playoff format, which allows only one day of rest and planning time following the end of the regular season.

“I would like to see a more normal format, with it starting Thursday or Friday of next week, but this is the hand we were dealt,” he said. “The other team will have to play with the same thing.”

The second round of the playoffs are scheduled to begin a week from Saturday.

A lot still up in the air

The Jacks will have their hands full holding on to third place, because they will visit first-place Team USA on Friday night and second-place Youngstown (the hottest team in the league in recent weeks) on Saturday, with both games on the road.

The good news is that Green Bay and Dubuque, the two teams trying to catch the Jacks in the standings, will wrap up the regular season playing each other twice this weekend. 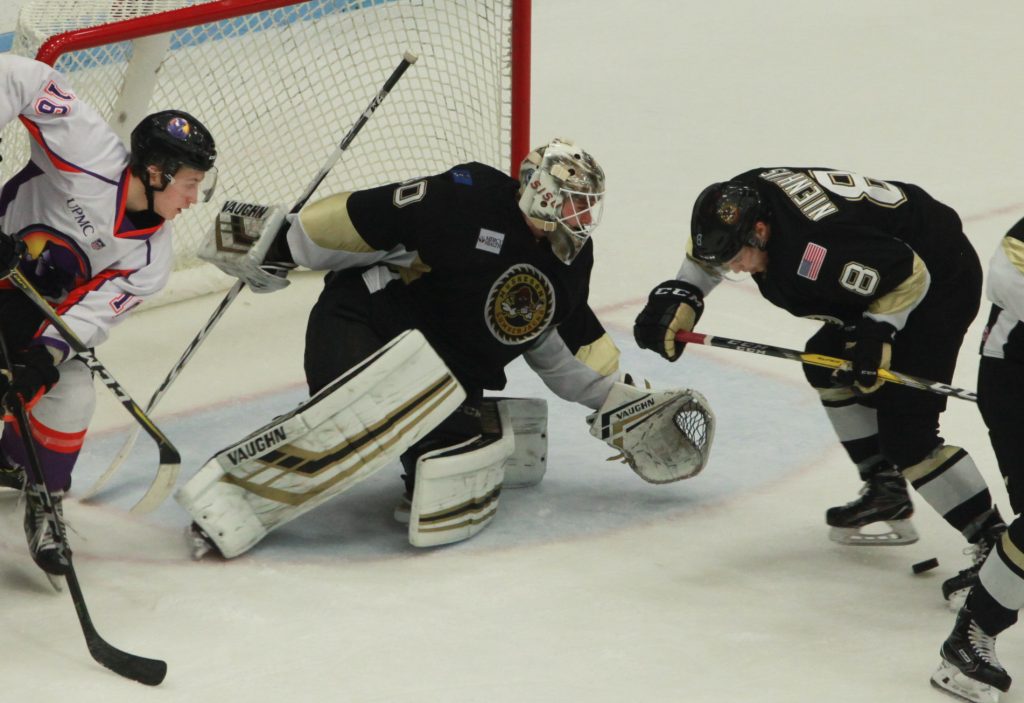 Muskegon goaltender Keegan Karki will play a big role for the Jacks this weekend and in next week’s playoffs. Photo/Tim Reilly

A Dubuque sweep, or a split, would allow the Lumberjacks to hold on to third, because they own the tie-breaker (total regulation and overtime wins) against Green Bay and Dubuque.

But if Green Bay sweeps Dubuque, and the Jacks lose two this weekend, Muskegon would slip to fourth place.

The battle for the sixth and final playoff spot in Eastern Conference is between Chicago (59 points) and Cedar Rapids (58). Both teams have two games left this weekend.

LaFontaine said it doesn’t really matter who the Jacks will play in the first round. No special effort will be made to win at all costs this weekend and remain in third place.

“We are not going to set our minds to wanting to play this team or that team,” he said. “In Saturday’s game, we’re going to play a lot of younger players and affiliate players, to give as many guys some rest as possible.’

It looks like Muskegon captain Anthony Del Gaizo is closing in on the USHL scoring championship.

Del Gaizo, in his third and final season with the Jacks, currently has 39 goals and 32 assists for 71 total points. Omaha’s Filip Suchy is second with 67, while Waterloo’s Jack Drury is third with 63. 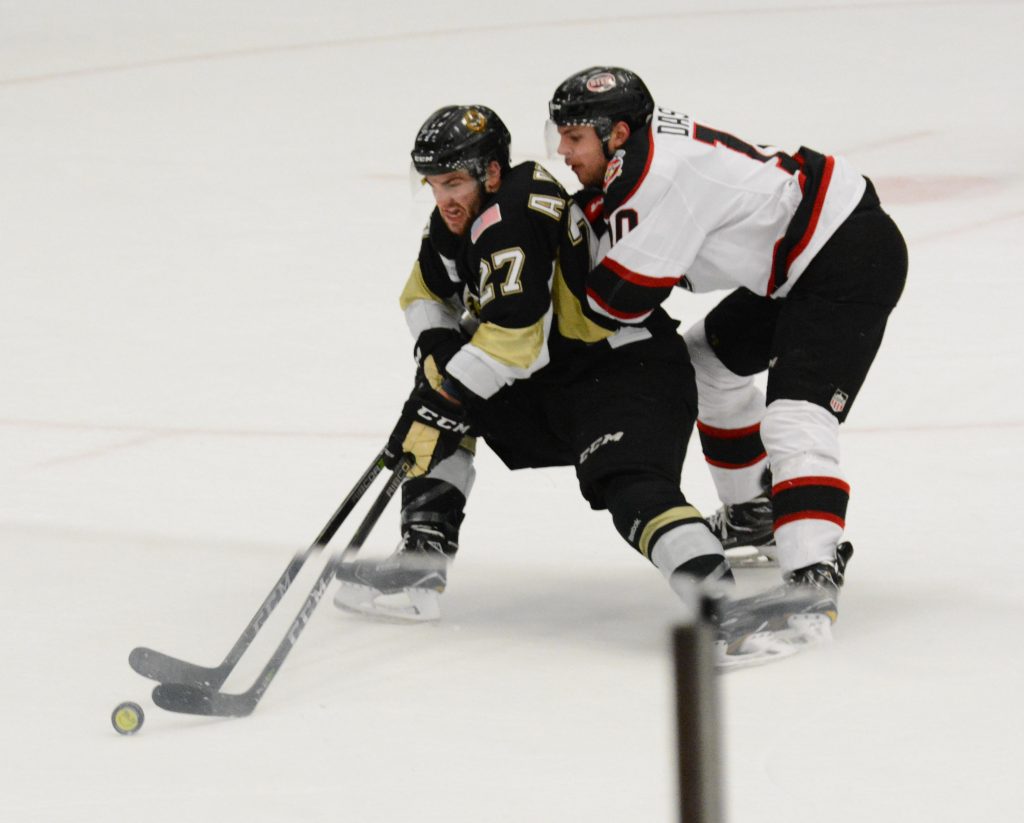 Muskegon’s Anthony Del Gaizo (27) is closing in on the USHL scoring championship.

That means Suchy would have to have a very hot final two games this weekend – and Del Gaizo would have to be pretty quiet – to alter the race.

Under different circumtances, Lumberjacks forward Matej Pekar would be entering the weekend battling for the league assist title.

He is currently tied for second in the league with 40 assists, two behind leader Ben Copeland of Waterloo.

But Pekar, a big part of the Jacks’ attack this season with 14 goals and 40 overall points, has left the team to join the Czech Republic squad for an international tournament in Russia. I

It’s the same tournament that stole star forward Andre Svechnikov and Jachyn Kondelik from the Jacks during last year’s playoffs.

Pekar will miss this weekend’s games and the first round of the playoffs, as well as the second round if the Jacks advance that far.

The good news is that the Jacks will be healthy heading into the stretch run, according to LaFontaine.

Forward Wyatt Bongiovanni, who has missed several weeks with an injury, is expected back this weekend, the coach said.