MUSKEGON – On a night when lots of shots weren’t producing many goals, the Muskegon Lumberjacks got the job

done with defense and penalty-killing.

As a result, the Jacks are one win away from advancing to the second round of the USHL playoffs.

The Lumberjacks came out flying in their playoff opener on Monday night, and had a 21-shot advantage over the Chicago Steel through the first two periods. But they only got two goals for their effort, and things got tight toward the end of the game.

But the Jacks escaped with a 3-2 victory at L.C. Walker Arena, and will try to sew up the short best-of-3 series Tuesday night with another home game against Chicago at 7:15 p.m.

“When you hold a team like that to limited shots after two periods, you’re putting yourself in a good position to win,” said Lumberjacks Coach John LaFontaine. “(Goalie Keegan) Karki played big and our guys defended well. They are the second leading offensive team in the league and we shut them down.”

The Lumberjacks, playing their third game in four nights, looked fresh and sharp in the first period, outshooting the Steel 19-5. 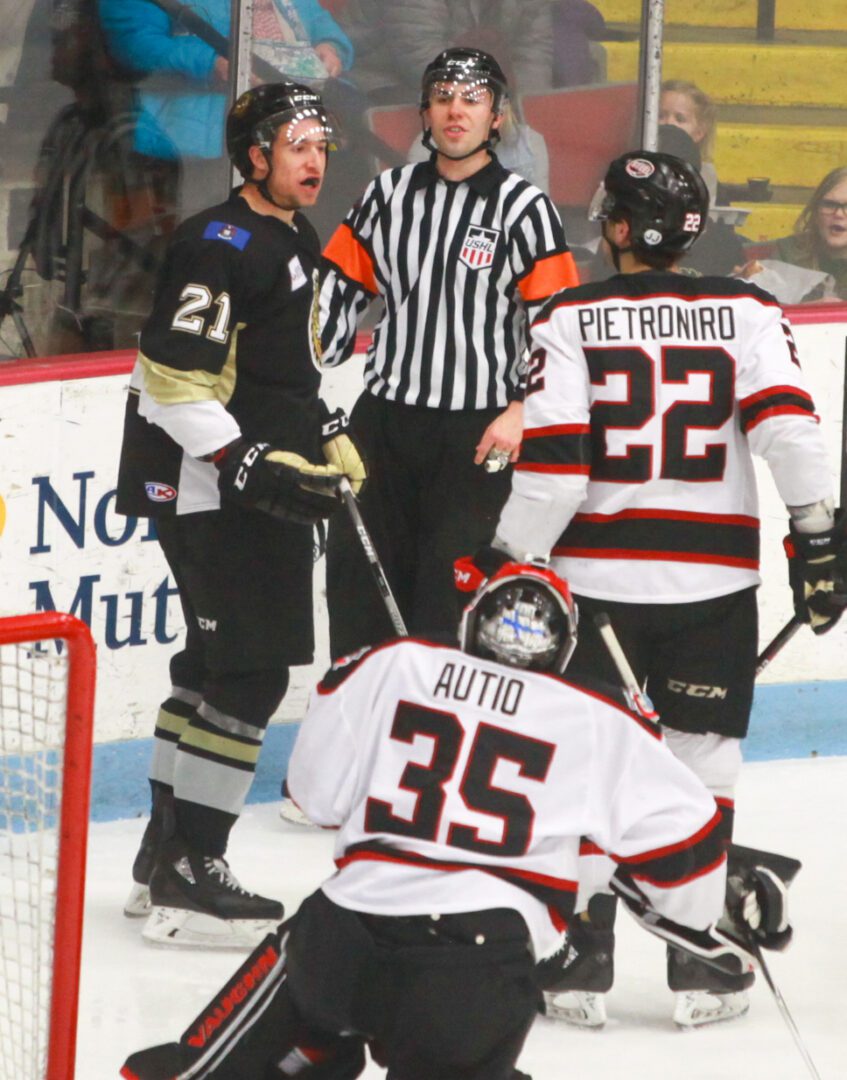 They got on the scoreboard first when forward Wyatt Bongiovanni got a rebound and shot it past Chicago goalie Oskar Autio at the 3:06 mark.

Nolan Sullivan made it 2-0 Muskegon when he got his stick on a wide shot and redirected it into the Chicago goal at the 13:12 mark of the first period.

The Lumberjacks continued the onslaught in the second period, outshooting the Steel 18-11, but no goals were scored in the second session.

Chicago made the game interesting in the third period, outshooting the Jacks 11-4 and coming within a goal of forcing overtime.

Erik Urbank put the Steel on the board with a goal at the 10:22 mark. Muskegon’s Jachym Kondelik answered with a goal at 12:18, putting the Jacks up 3-1, but Chicago wasn’t done.

The Steel pulled their goalie for an extra attacker with more than two minutes left in the game, and the strategy paid off when Jack Dugan scored with 2:12 remaining, cutting Muskegon’s lead to 3-2.

The Steel continued to attack with an extra skater for the rest of the contest, but failed to get the equalizer.

The Lumberjacks’ defense and penalty-killing were critical in the victory. The Jacks killed off all four of Chicago’s power-play opportunities.

The penalty-killing was necessary, because the game got heated at times, and there were quite a few minor skirmishes.  There was a major pushing-and-shoving session immediately after the game, involving numerous players from both squads.

The Jacks were whistled for eight penalties for 16 minutes which Chicago had six for 12 minutes.

LaFontaine, who has been lecturing his team all season about maintaining discipline in the face of provocation, was not happy with several of the penalties.

“The penalty kill was big, and I am hoping it doesn’t have to be big tomorrow,” the coach said. “This group needs to understand that they need to keep their heads. It’s all about self-control. The other team was rattled and we should have kept it that way.”

Goalie Keegan Karki, who was rested during the Jacks’ final regular season game on Saturday, stopped 25 of 27 shots to get the victory. 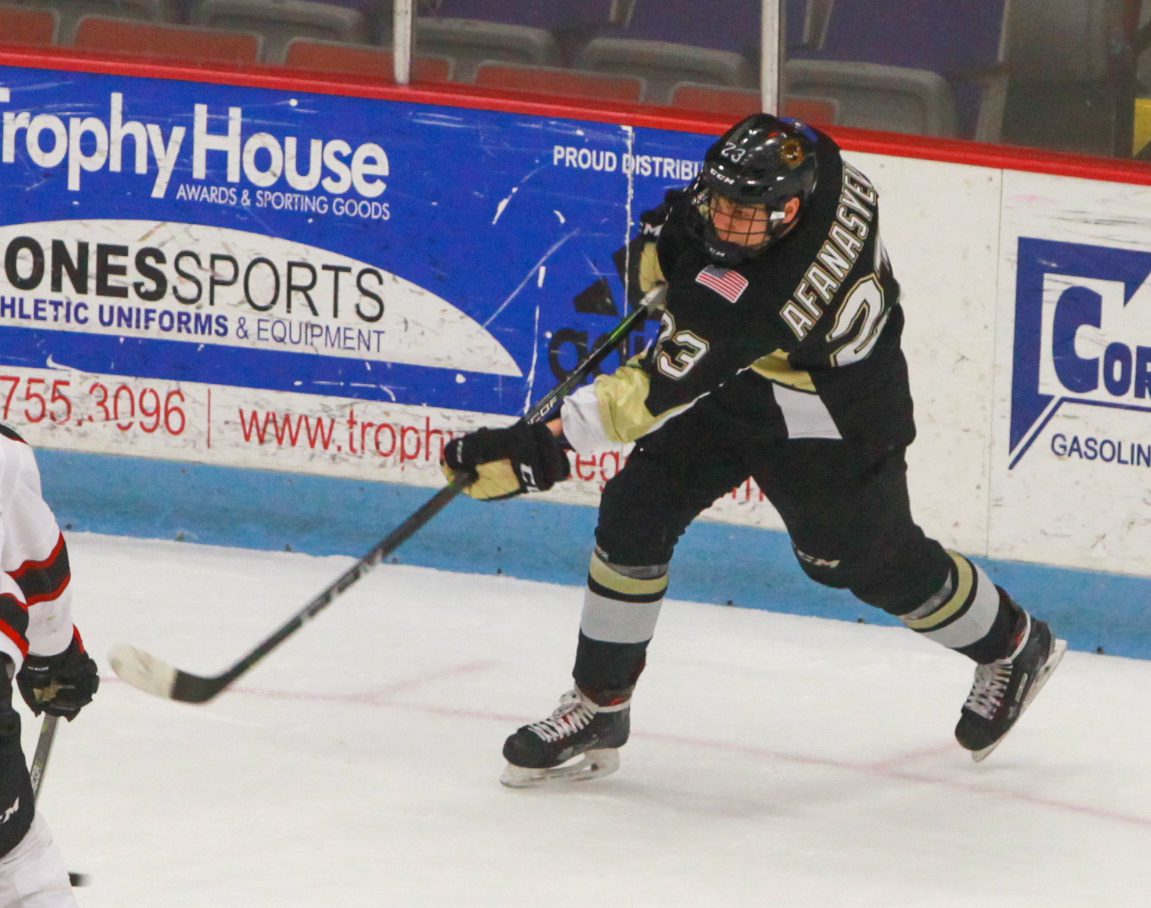 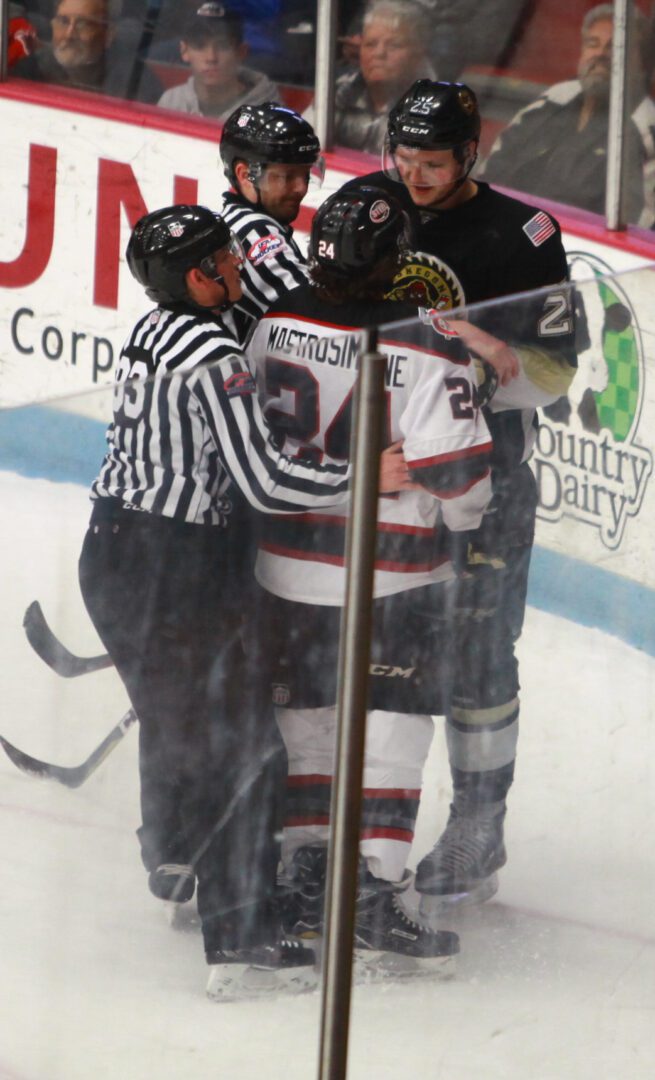 Muskegon’s No. 25 Jachym Kondelik has words with Chicago’s Robert Mastrosimone after the play. Photo/Jason Goorman 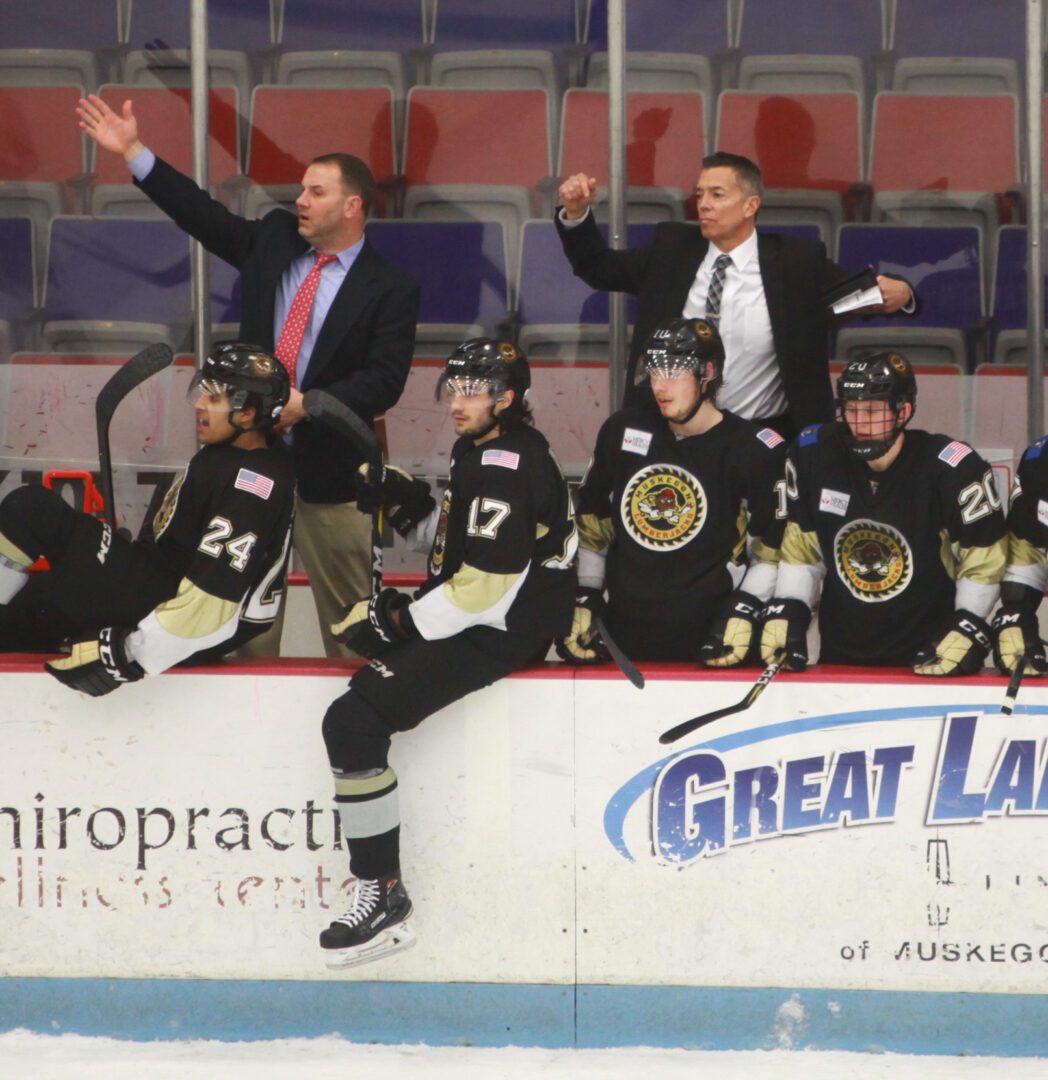 Muskegon coaches react after a no call by the officials. Photo/Jason Goorman 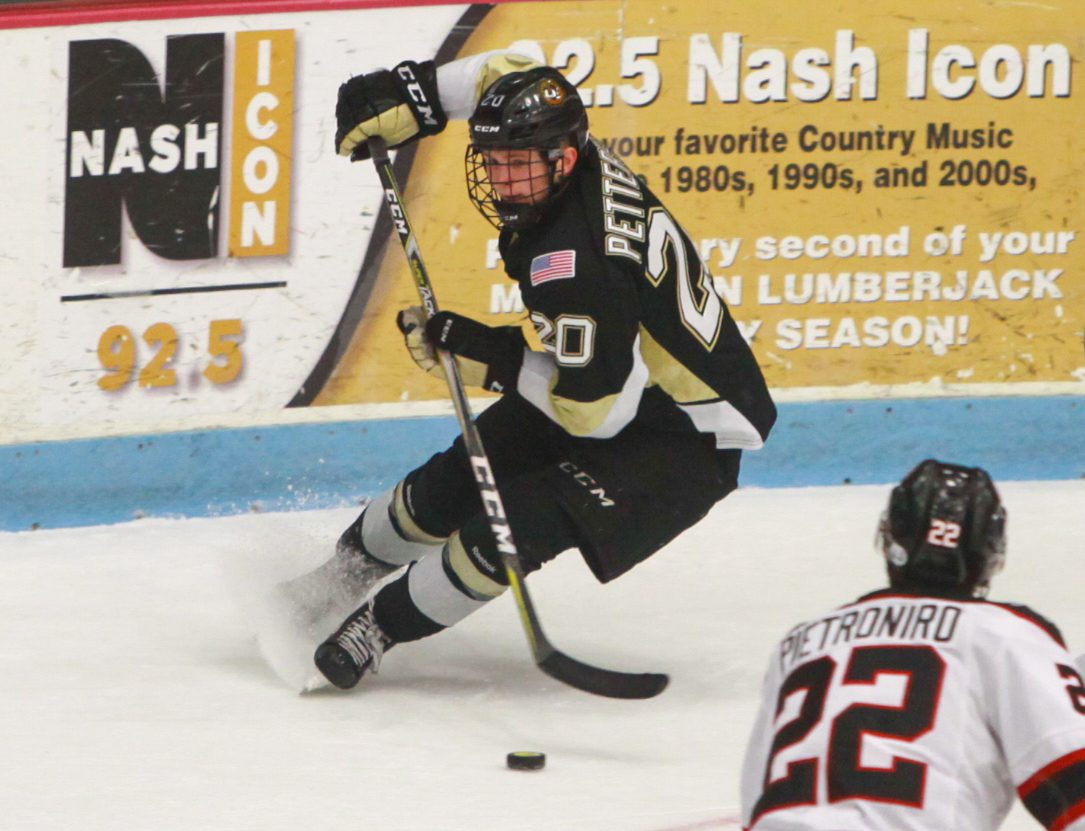 Emilio Pettersen makes a cut while controlling the puck for Muskegon. Photo/Jason Goorman 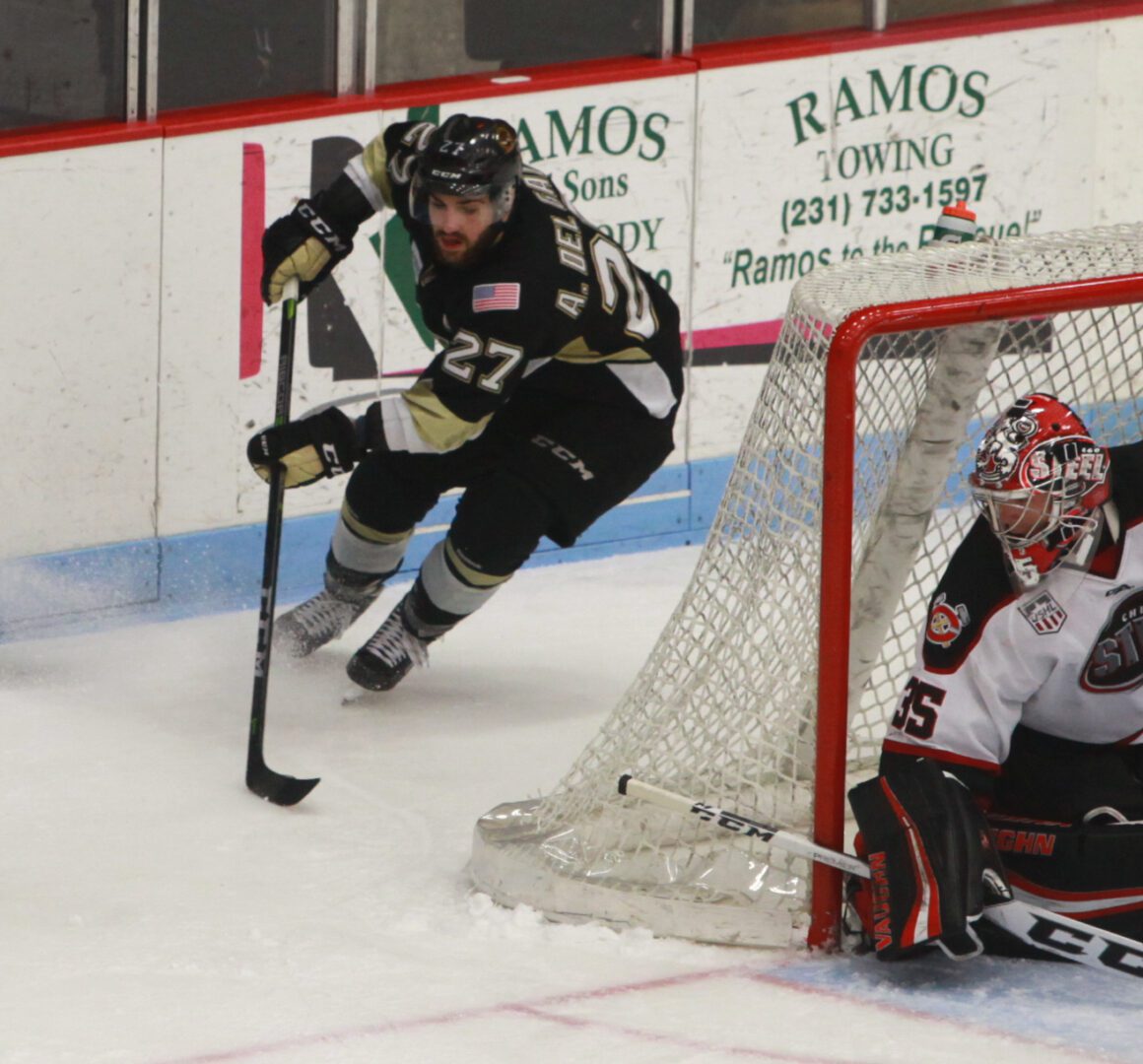 Anthony Del Gaizo brings the puck around the Chicago net while goalie Oskar Autio guards the inside post. Photo/Jason Goorman 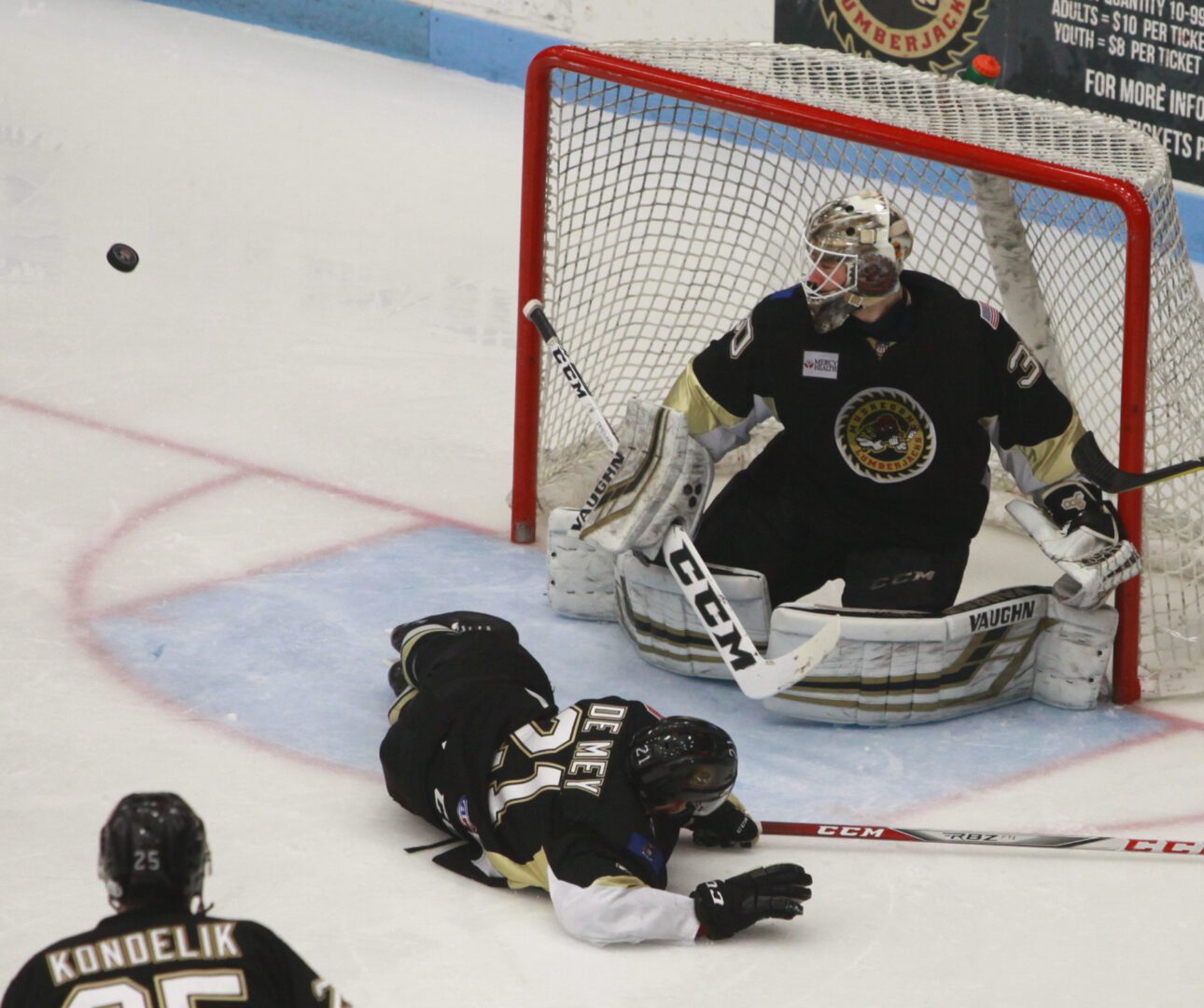 Muskegon goalie Keegan Karki watches the puck after No. 21 Vincent De Mey gets down the on the ice to block the Chicago shot. Photo/Jason Goorman 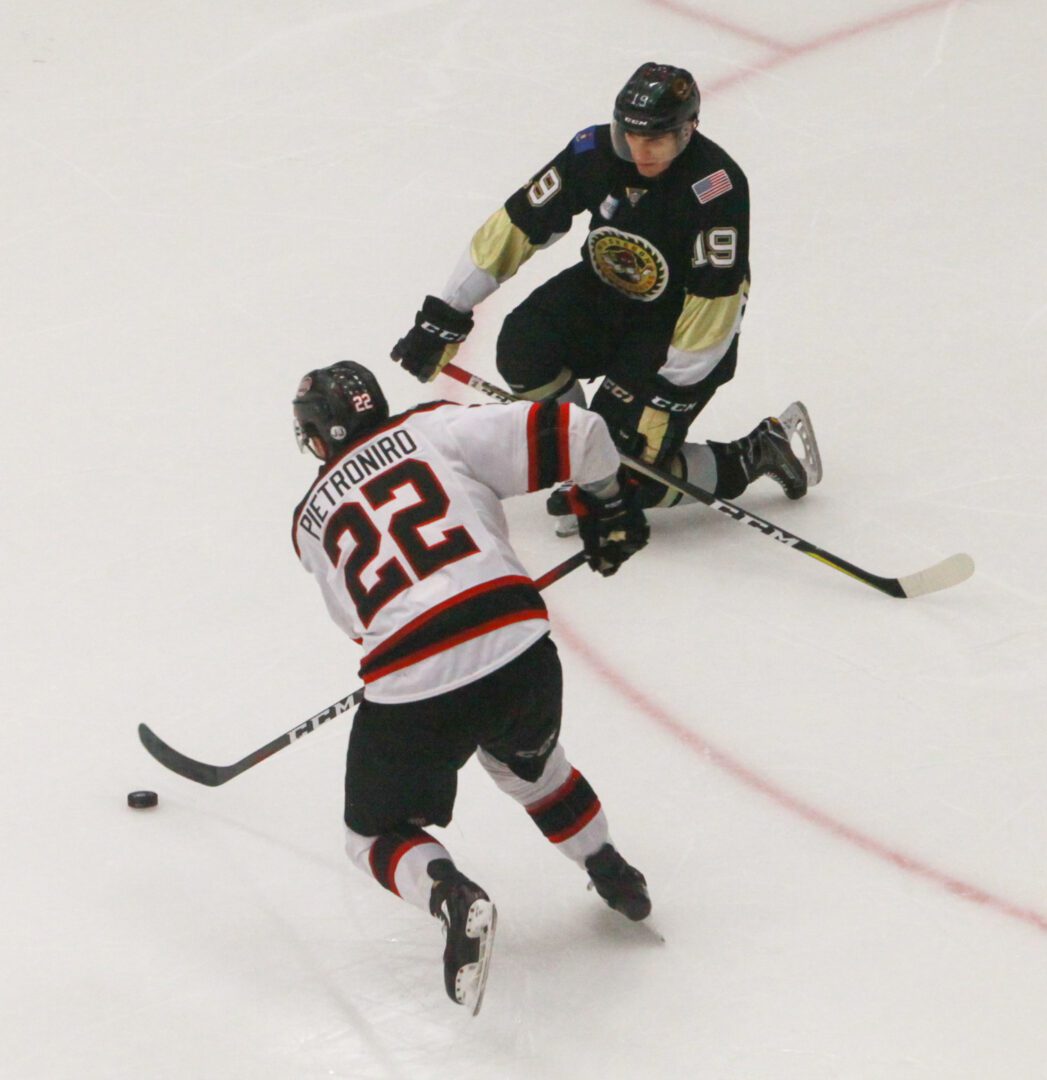 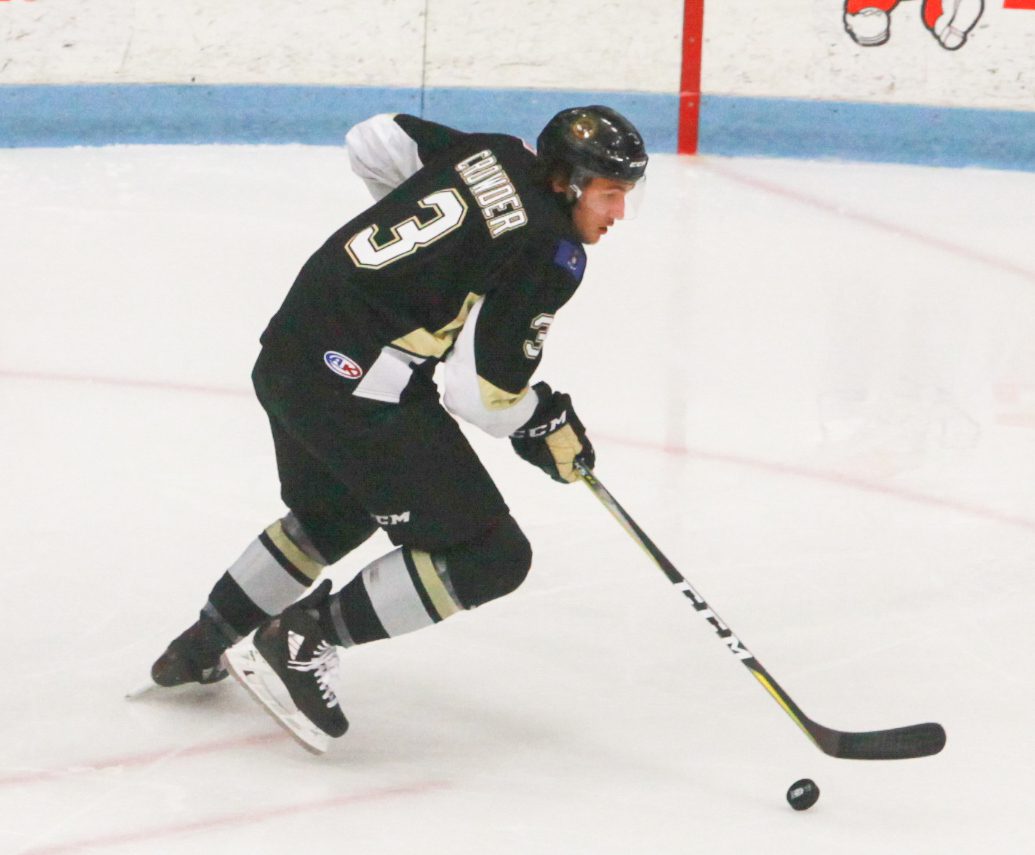 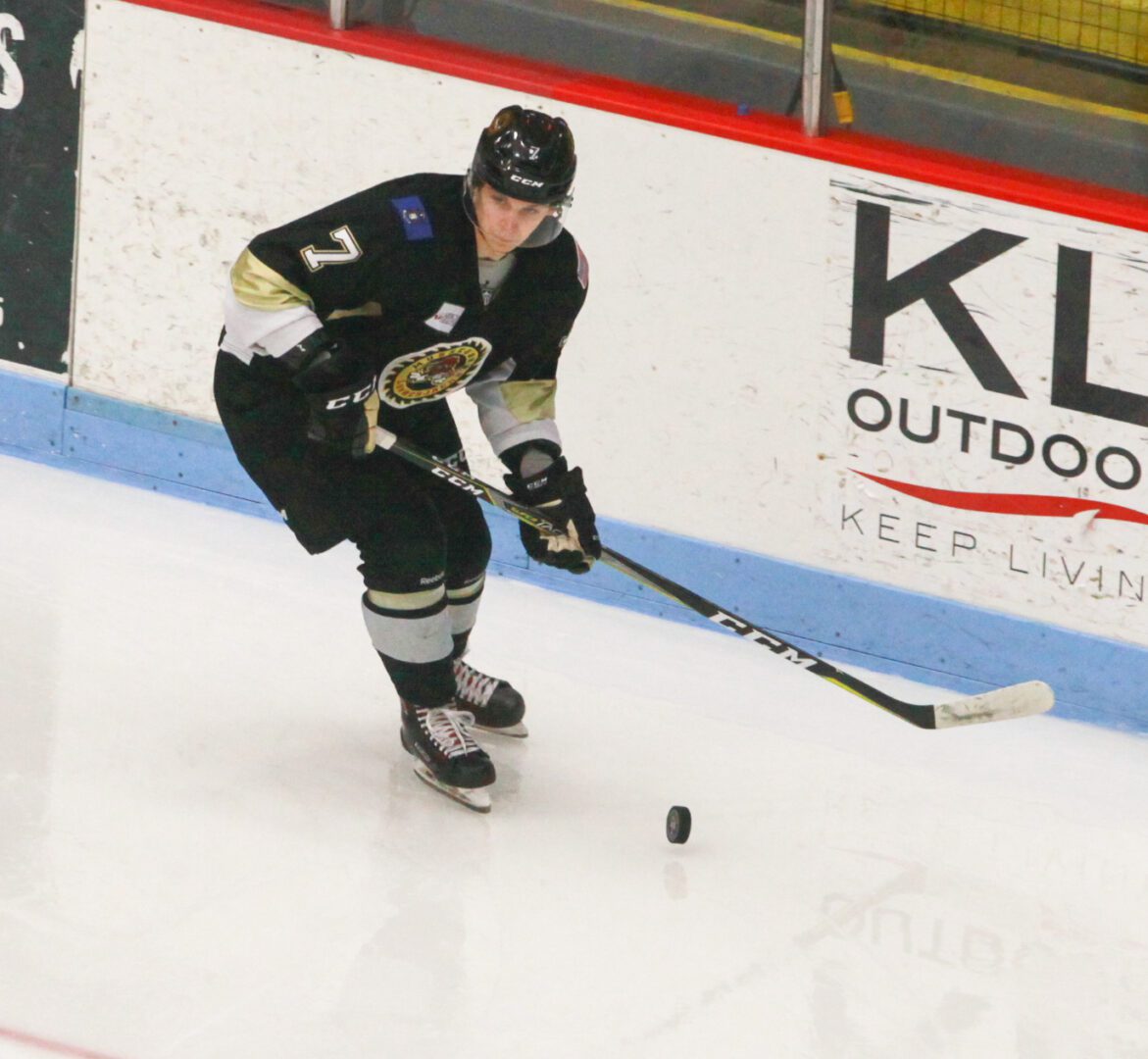