MUSKEGON – Despite a 4-3 loss to Grand Rapids, the Muskegon Risers made some progress in their home opener on Friday night.

After experiencing a pair of shutout losses to open the season, the Risers showed some offensive life by scoring three goals
at Muskegon Catholic Central’s Kehren Stadium.

“We finally got our first goal of the season. To put three in is great,” said Muskegon Coach Ben Ritsema. “We did some good things. We’ll build off it and get ready for our league play next week.”

The loss to GRFC knocks the Risers out of the Michigan Milk Cup tournament, which features eight teams from four different leagues around the state. They also lost to Grand Rapids last week, 1-0, and had to outscore their opponent in total goals over the two games to advance.

“We fought well, they just had a little bit more strength than us tonight,” Ritsema said. 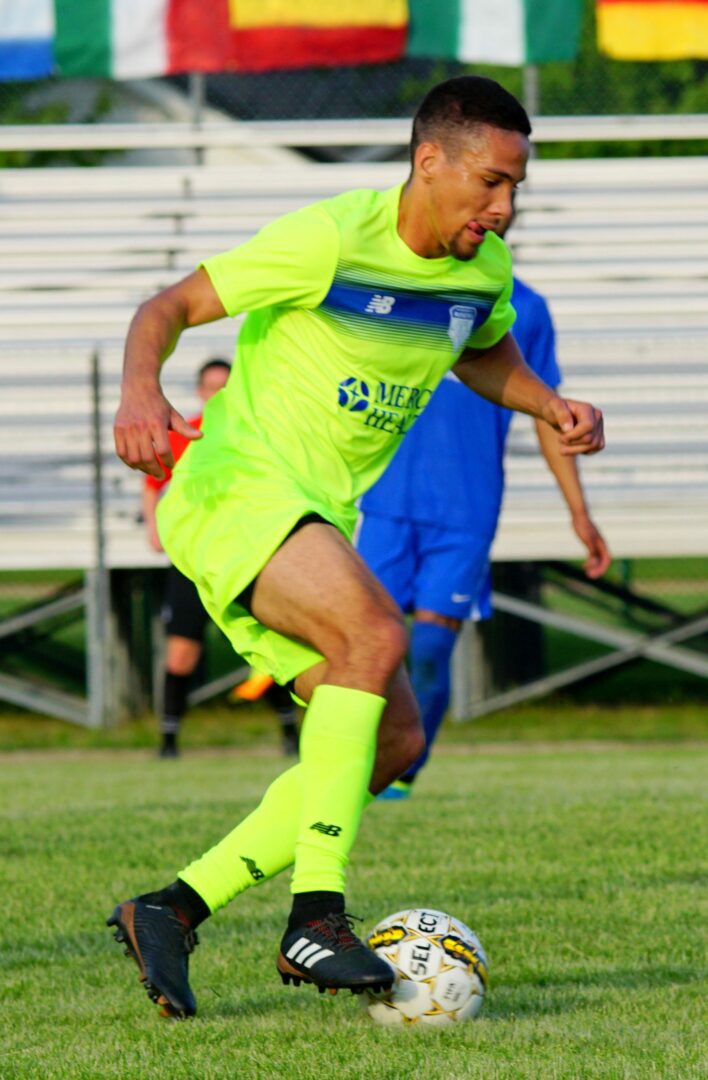 Greg Williams pushes the ball up the field for MKG. Photo/Leo Valdez

The Risers appeared to take an early lead just minutes into the game. After a few deflections, Muskegon put one in the net. But after a referee meeting, the goal was waived off.

“It was offsides,” Ritsema said about the play. “The thing that I don’t like about it is, if it’s offsides why doesn’t the flag go up right away? We think we’re up 1-0, we think we tied up the aggregate score, then they disallow it. I think we kind of hung our heads a bit, then they scored two goals.”

The Risers found a way to answer, though. Muskegon rallied for three goals before the half to take a 3-2 lead.

Elmedin Zukic got the scoring started with 9:08 to go in the half off an assist from Nicolas Likulia. Zukic found the back of the net again on another ball from Likulia with just 13 seconds left on the clock.

Two minutes of stoppage time were added to the end of the half. Muskegon took advantage when Adam Clauss put in the go-ahead goal during the extra time.

“What I really did like was our character to come back and take the lead by halftime,” Ritsema said. “To be down two goals then up 3-2 at halftime, that doesn’t happen too often. I really was proud of the character we showed.”

The Risers couldn’t make the lead stick in the second half, though. Scott Doney found the net with 30:37 remaining to even the score. Morris Kamara scored the game winner for GRFC with 19:10 to play.

The Risers have nine games remaining, all against league opponents. Ritsema says his team needs to work on its backline defense to win going forward.

“We’ve got to tighten up things in the defensive area,” he said. “Making sure we don’t lose our marks, and the second guy coming in at times we’re slow to react. Keeping the ball more on offense is going to be important as well.”

The Risers are back in action next Saturday at home against Ann Arbor. 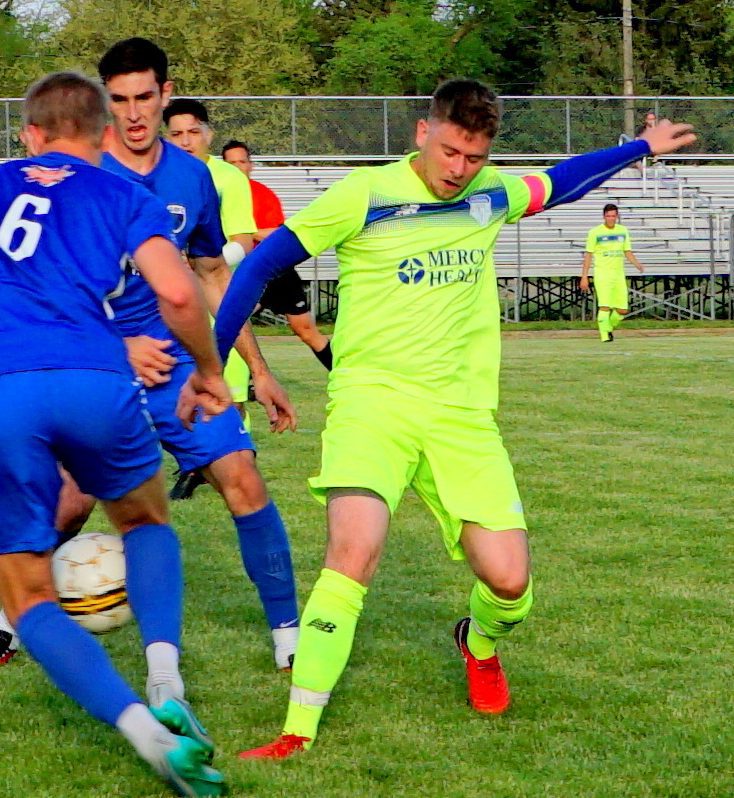 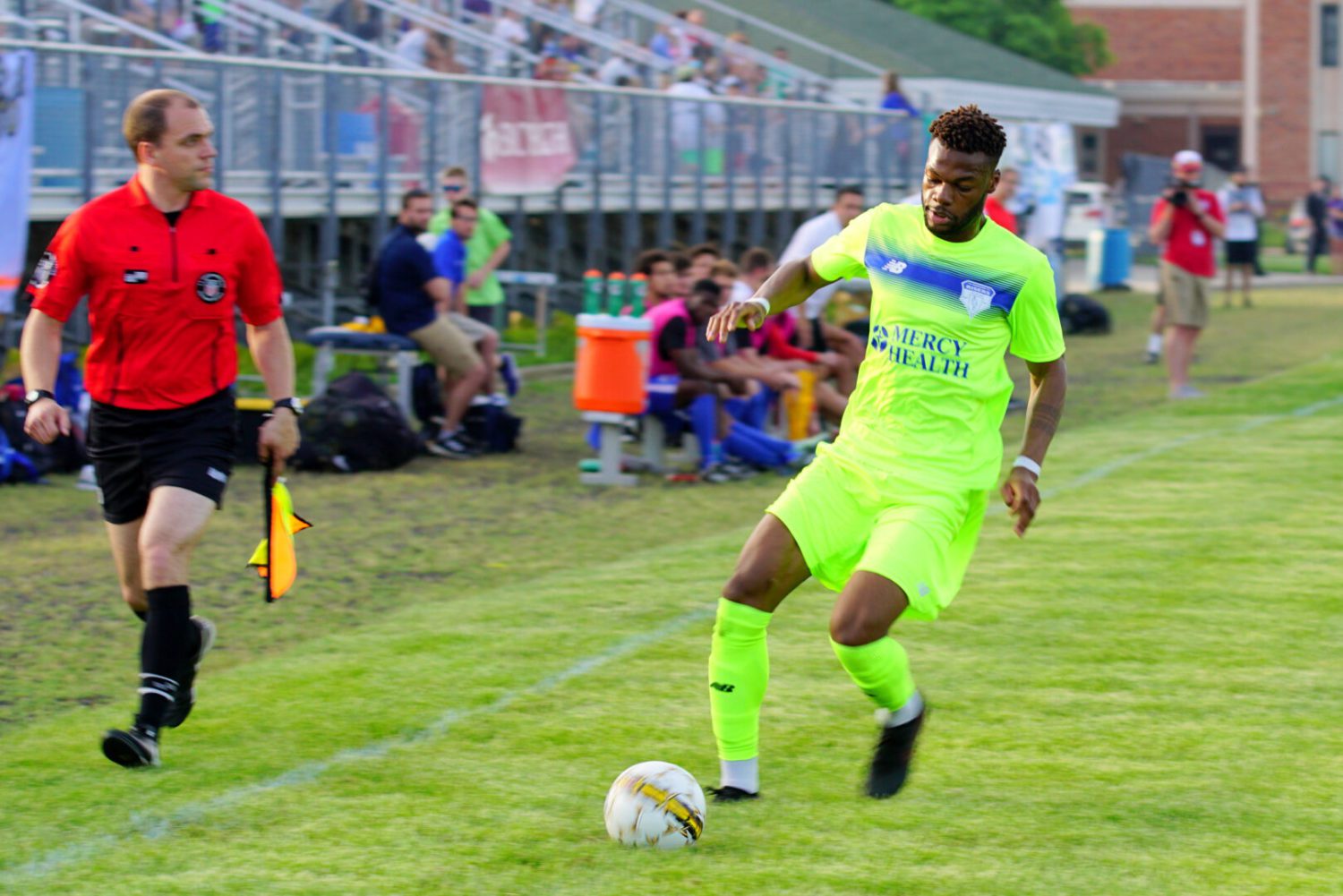 Nicolas Likulia pushes the possession along the sideline for MKG. Photo/Leo Valdez