HOLTON – This time of year, the word ‘commencement’ is frequently heard, in reference to high school or college graduation ceremonies.

But the broader definition of the term – a new beginning – is more fitting for Aaron Herron.

Herron experienced a new beginning between his eighth grade and freshman years, when he transferred from Muskegon Heights Academy to  Holton High School.

Although his start at Holton included a sharp adjustment period with various frustrations, the move is starting to pay big dividends for the high school junior, in sports and in the classroom.

The talented Red Devil will compete in four events at Saturday’s Division 4 state track and field finals at Hudsonville High School – the 100-meter dash, 200-meter dash, the 110-meter hurdles and the high jump. 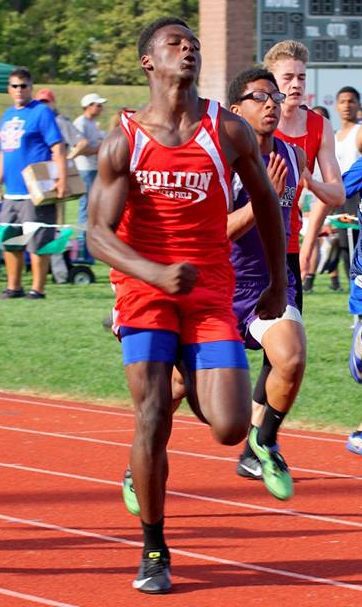 He won regional titles in three of those four events on the Red Devils’ home track on May 18 (he was runner-up in the 200-meter dash), and has high hopes of winning at least one individual state title on Saturday.

His best chance will probably come in the hurdles, where he currently sports the second-fastest time in the state in Division 4.

“I think I have a good chance to get top five in all four (events),” Herron said.

Life has not been as simple as winning races for the 6-foot-2, 180-pound Herron.

His world was turned slightly upside down when the decision was made to move him from the comfort zone of his close friends and classmates in Muskegon Heights to an unfamiliar school in Holton.

But that’s what his mother wanted, and as Herron points out, what mom says goes.

“My mom (Nashira Sims) decided it was the right thing to do,” Herron said. “She’s just doing what any mother would do in the best interest of her family.”

Sims’ decision to move her son to Holton was spurred by tragedy. Herron lost a brother and a cousin to gun violence, and his mother didn’t want him to face similar risks.

So Herron and his cousin, Derek Pouch, moved in with an uncle, Harry Griffin, who lives just outside the Holton district. 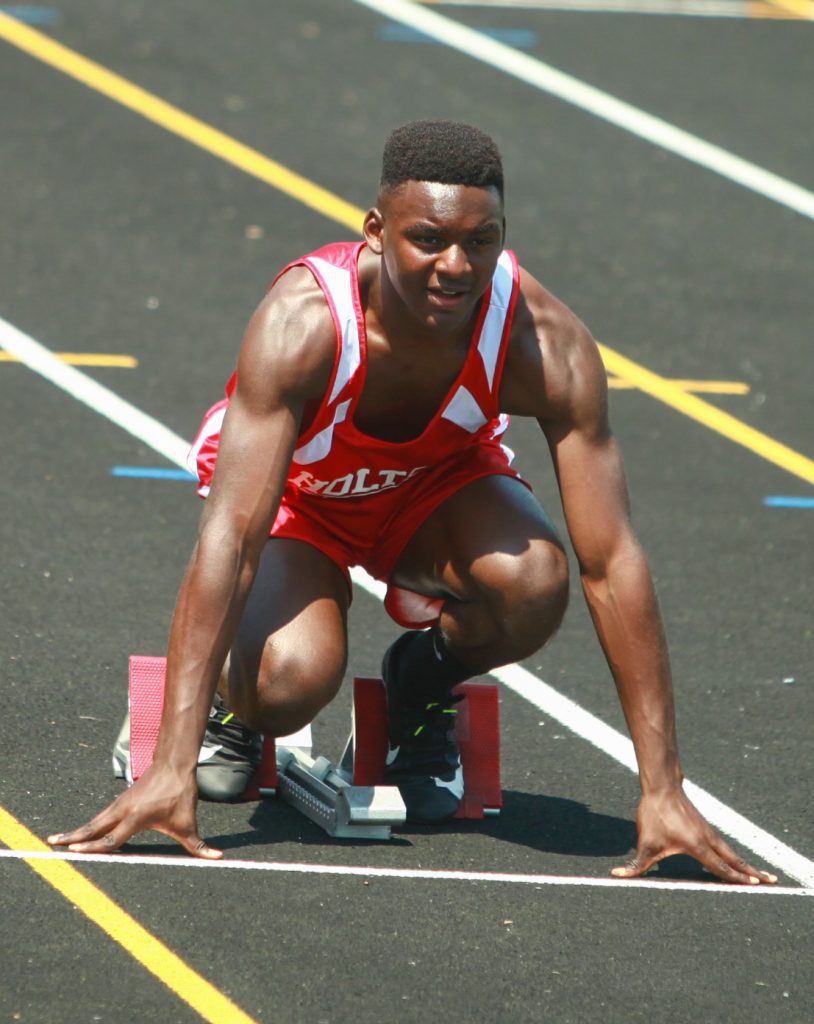 Herron prepares to blast out of the starting blocks during practice. Photo/Jason Goorman

But Griffin’s work schedule didn’t allow him to get Herron and Pouch to school in the morning on a daily basis. So Holton officials put their heads together and found another option for the boys.

They found a couple – John and Nichole Piper – who were willing to open their doors and provide guidance and love for both boys. Their daughter, Kylie, is also a junior at Holton and a member of the Red Devils’ outstanding softball team.

“They’re like an aunt and uncle,” Herron said of the Pipers. “They want what any parent would want. They want you to give it your best. That and have fun.”

Holton athletic director/football coach Jack Nummerdor said both boys struggled at times during their freshman year at the school, which was not surprising, considering the many adjustments and changes in their lives.

“From the get-go, it was tough,” Nummerdor admitted. “Aaron didn’t want to buy in completely. With Derek, there was a stretch there where he’d have office referrals like three or four times a day.”

Herron said coming to Holton was difficult because of the cultural differences between the two communities and schools. He said he also had trouble focusing in the classroom. 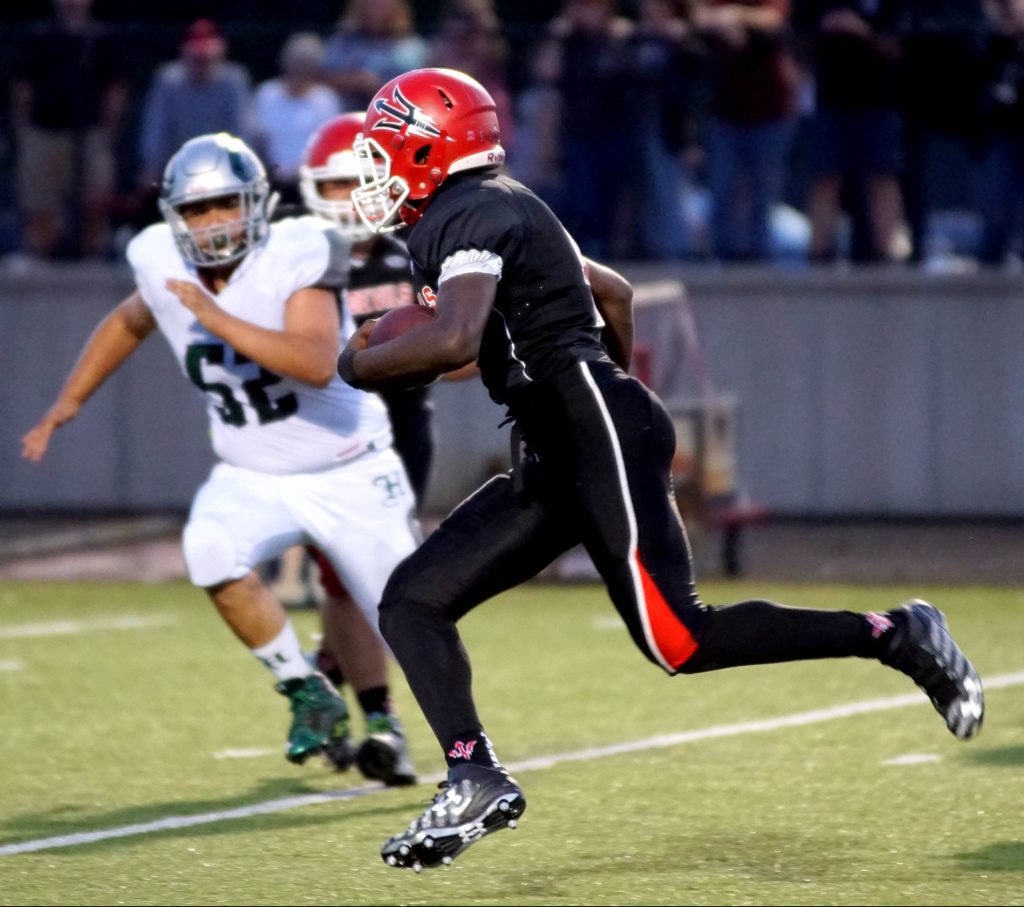 Football could be Herron’s ticket to a college scholarship, according to Holton AD Jack Nummerdor. Photo.Leo Valdez

“There’s not a lot of black kids here,” Herron said with a laugh. “It was kind of tough being the new kid, but I do have an outgoing personality. Some people liked me, and some didn’t. That’s life.”

But as he began to get more comfortable with his surroundings and make more friends, Herron began to flourish. Holton track coach Tim Horenziak said Herron joined the team for the first time as a sophomore, and after a year he has noticed significant improvements.

“Every drill he does is self-reflective, in that he wants to be better the next time in everything he does,” Horenziak said. “He wants to be the best. He’s got a great attitude. He’s always the last one still at practice.”

In football, Herron and Pouch started both ways for the Red Devils last fall. Both were running backs on offense, and also did very well on defense. Herron became one of the best defensive backs in the Central State Activities Association, while Pouch starred at linebacker.

Both also played basketball in the winter. 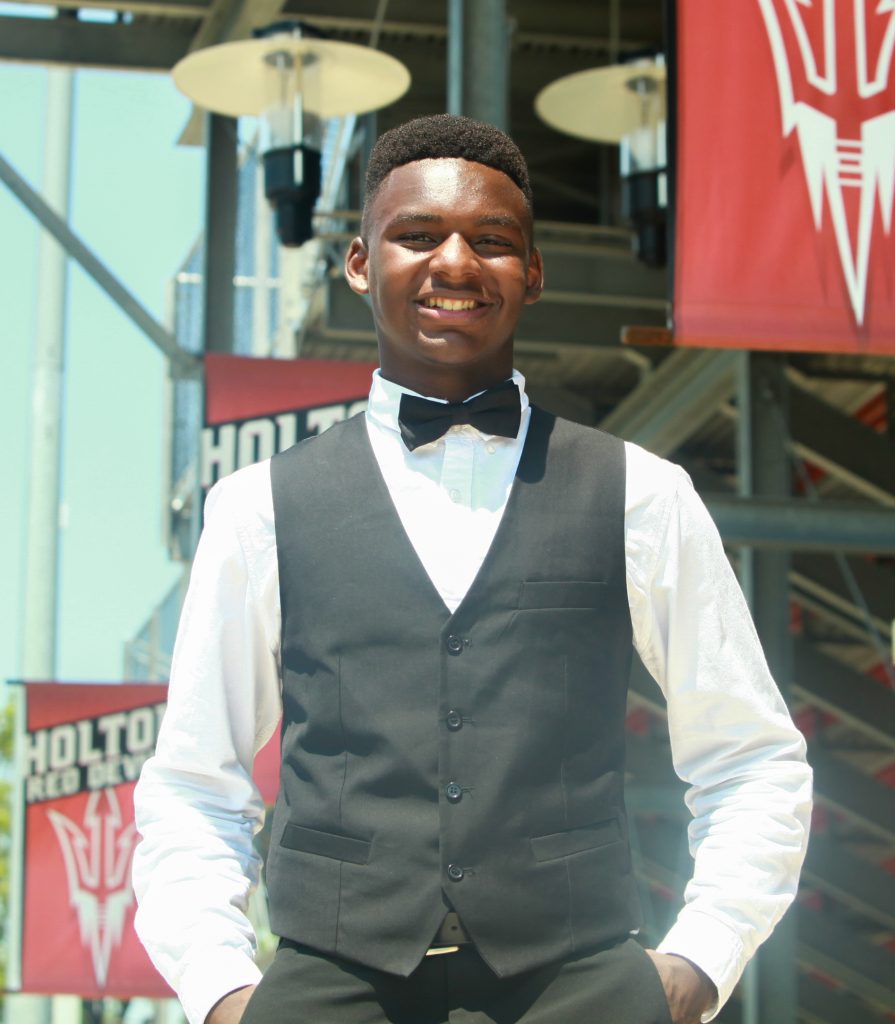 Holton’s Aaron Herron wore his best for the LSJ on May 30. Photo/Jason Goorman

“Football could be Aaron’s ticket (to the next level),” Nummerdor said. “The University of Cincinnati wants him to come to their camp, and Wayne State and Ferris are interested in watching him.”

Herron has also developed as a student. His grade point average has soared to 3.0, he’s a member of the band and student council, and he volunteers with Peer Assistance, a mentoring program that connects high school and middle school students.

“We just try to be someone they can look up to,” Herron said about the middle-schoolers he works with. “Provide them with a support system.”

Nummerdor said both Herron and Pouch have made tremendous strides and immersed themselves in the Red Devils community.

“With Aaron, I couldn’t talk any higher about any other kid I’ve coached,” he said. “He’s got such an outgoing personality. And he’s barely into it all. He’s just scratching the surface at what he can accomplish here.”

Herron believes he would be at the top of his class academically at Muskegon Heights. but he’s thankful for the opportunity to get a fresh start. He still gets home every weekend to visit his mother, but his high school life is firmly centered in Holton.

“I’ve always been willing to learn and try new things,” Herron said. “Coming here was definitely life-changing, and I know I’m the minority now. But I’ve got to meet a lot of new people, which is always great. I’m pretty happy that I came here.” 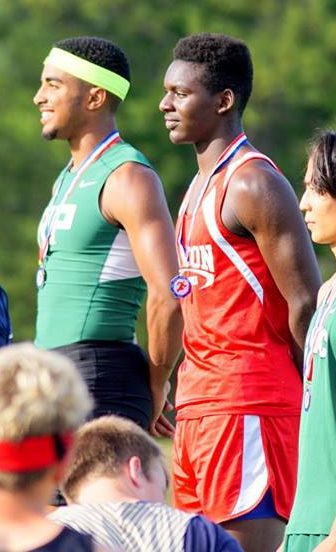 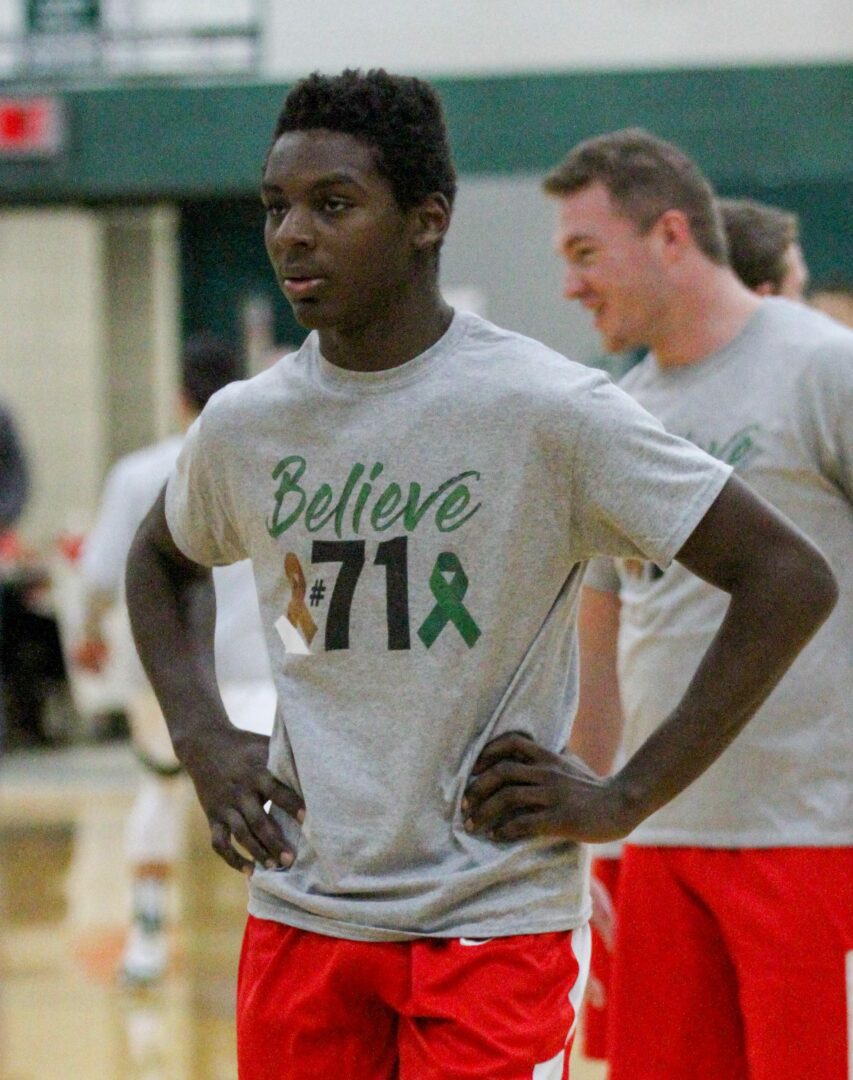 Aaron Herron during warmups at a varsity basketball game against Hesperia. Photo/Michael Cherry 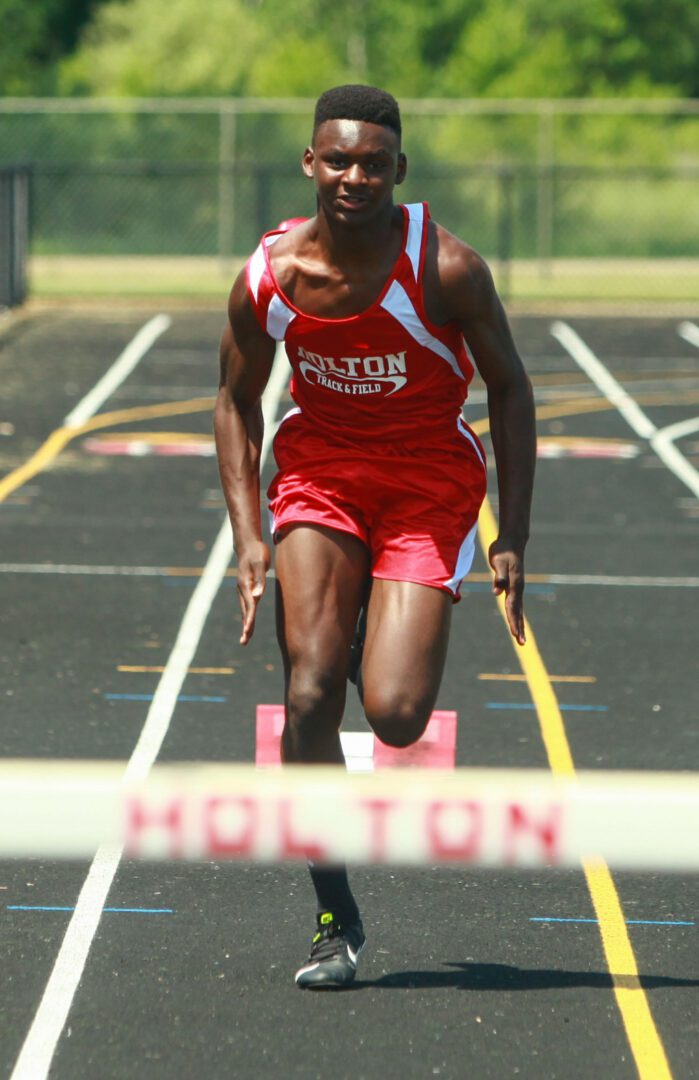 Aaron Herron eyes a hurdle during a practice session with the LSJ. Photo/Jason Goorman