COMSTOCK PARK – Being a top prospect for a Major League Baseball team comes with a lot of pressure.

And when you’re only 20-years-old and 2,000 miles away from home, that type of stress could be overwhelming.

But West Michigan Whitecaps pitcher Matt Manning, the Detroit Tigers’ No. 1 pick in the 2016 draft, is learning to relax, focus on his strengths, and let his talent carry him toward success.

“I felt a little bit (of pressure) early on,” said Manning, who was drafted out of Sheldon High School in Sacramento, California at age 18. “But I think I’ve matured a lot, and I’ve just learned to worry about myself and my career, while keeping an eye on what’s ahead of me.”

Manning got off to a bit of a rough start this season. He opened the campaign on the disabled list due to an oblique strain that occurred in mid-March. He was put back on the active roster on April 20, but struggled with his control for a few weeks.

But lately he has shown everyone why the Tigers made him the ninth overall pick in the 2016 draft. 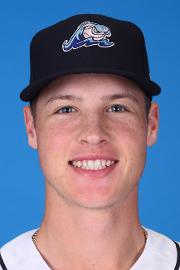 Manning may have been at his best on Sunday, when the Whitecaps finished the first half of their season with an 8-0 shutout of Dayton in front of a big Father’s Day Crowd at Fifth Third Ballpark. He pitched seven innings in the sweltering heat, allowing no runs on three hits with six strikeouts and no walks.

“I’m pretty confident,” said Manning, who is now 2-3 on the season with a 3.70 ERA. “I like pitching here and I like being at home, having my routine set. If I get through the first inning I get pretty comfortable.

“I think I ended the first half on a good note. I’ve been throwing the ball well. I just need to keep doing what I’m doing to stay hot.”

Whitecaps Manager Lance Parrish, a former All-Star Tiger catcher who has worked with some great pitchers in his time, said Sunday’s performance may have been a real turning point for Manning.

“He’s struggled a little bit with his command off and on, but he looked to be in total control today,” Parrish said. “It was a difficult day to pitch, but he kept composed and executed. It seems like he took a giant step forward today.” 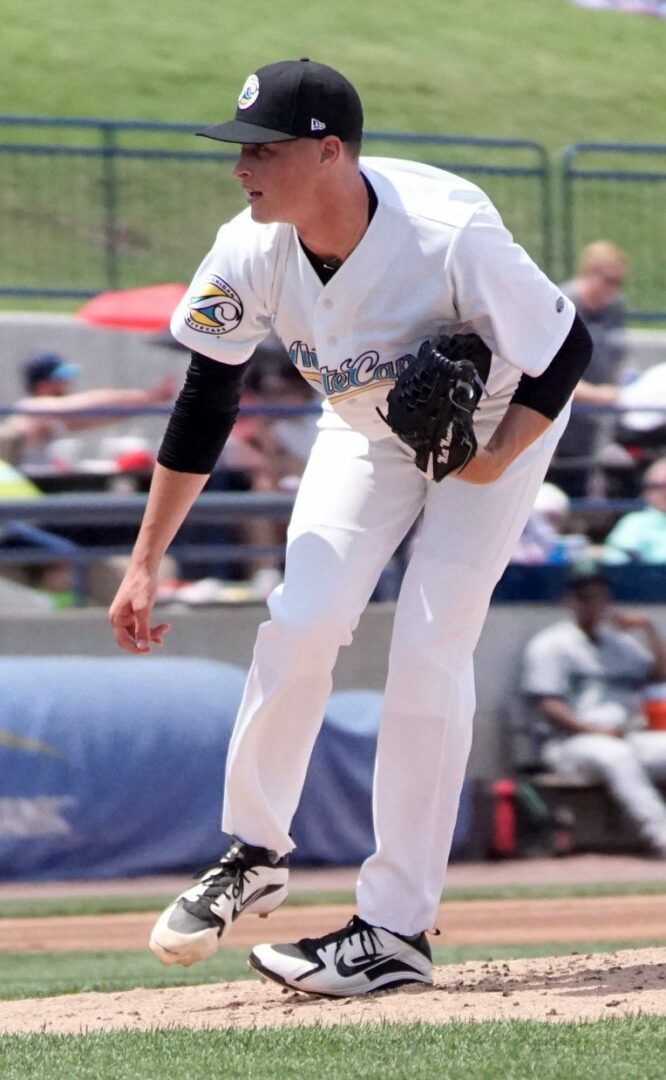 Manning’s success to this point is not surprising, because he has strong athletic genes. His father, Rich Manning, was a basketball star who was drafted in 1996 by the Atlanta Hawks and played two seasons in the NBA.

“It’s been good getting advice from him,” Manning said about his dad. “We talked a little bit about it and he gave me some advice about off the field stuff, expectations, and just how to work every day.”

Family is even more important to Manning these days, since he’s so young and so far away from home, and has Tiger executives watching him closely every time he takes the mound.

“We have a lot of phone calls,” he said. “My dad was out here for my start on May 22 and my girlfriend comes, here and there, for a few visits. It’s been pretty tough, but I feel like I’ve adjusted pretty well.”

Manning’s statistics so far this season reflect his rapid development.

He has 68 strikeouts in just over 48 innings of work, which is more than his strikeout total of 62 in 51 innings last season with Connecticut (a Tigers rookie league team) and the Whitecaps. He says his velocity has improved, which helps him keep more batters from putting the ball in play.

“I think my fastball has a little extra jump,” Manning said. “It’s getting hitters out with a little more movement.”

“He can create a great angle with it at 95-plus,” Cordova said. “But his curveball is above average, too.  He just needs to learn to throw it for a strike more consistently. He also needs to learn how to throw it in the dirt to get hitters to chase, which will come with time.”

“He’s shown more than last year. I see a big leaguer who has a bright future in baseball. He still has a long way to go and has a lot to learn.  He still has to develop a lot when it comes to pitching and his confidence, but he’s going the right way.”

Fans always wonder how long it will take top draft picks like Manning to reach the big leagues, but Manning is not setting any timetable for himself. He just wants to keep working hard and improving at every level of the minor leagues.

“I don’t want to look to put too much pressure on myself,” he said. “If I get promoted, it means I’m going out and doing the right things.” 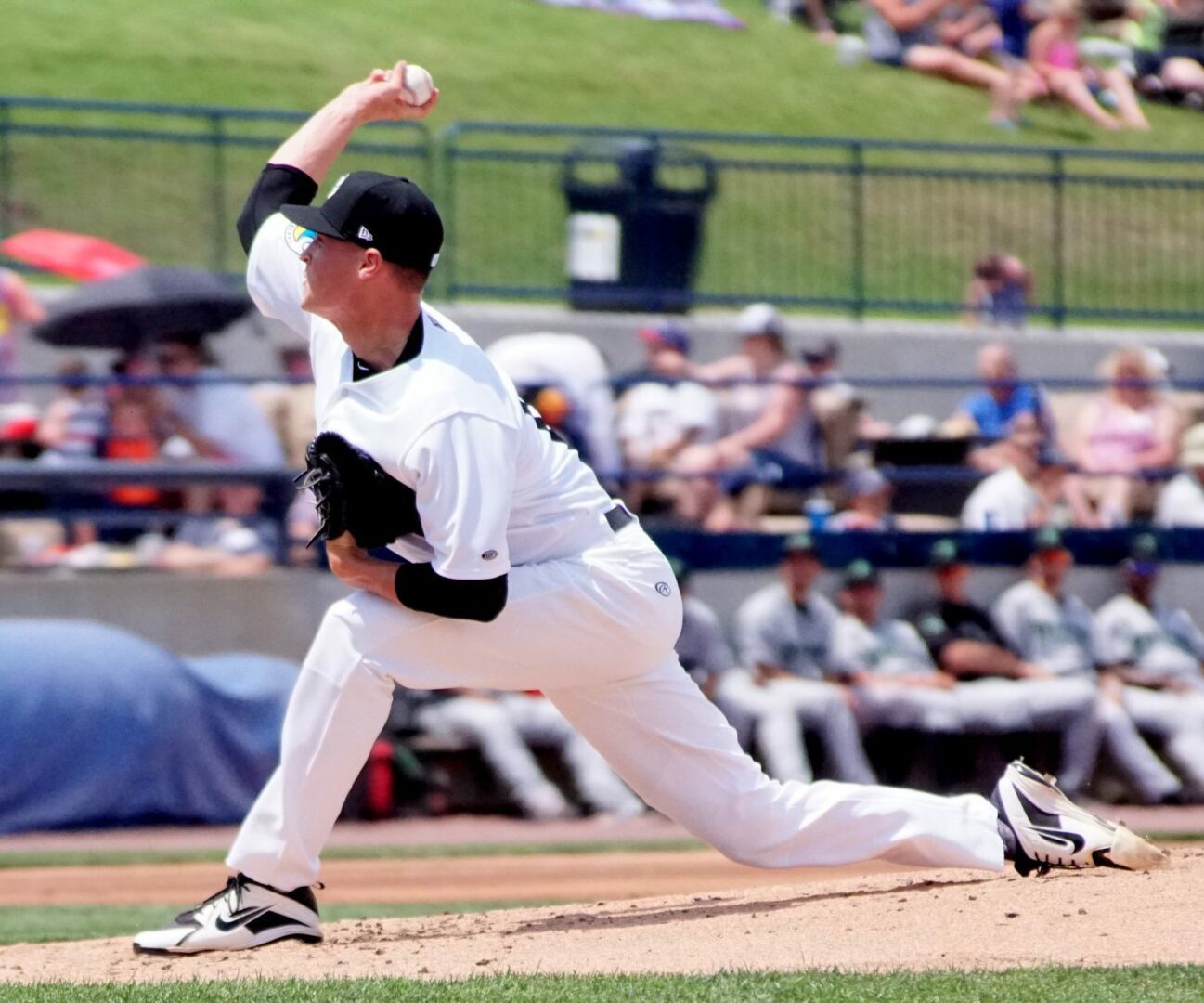 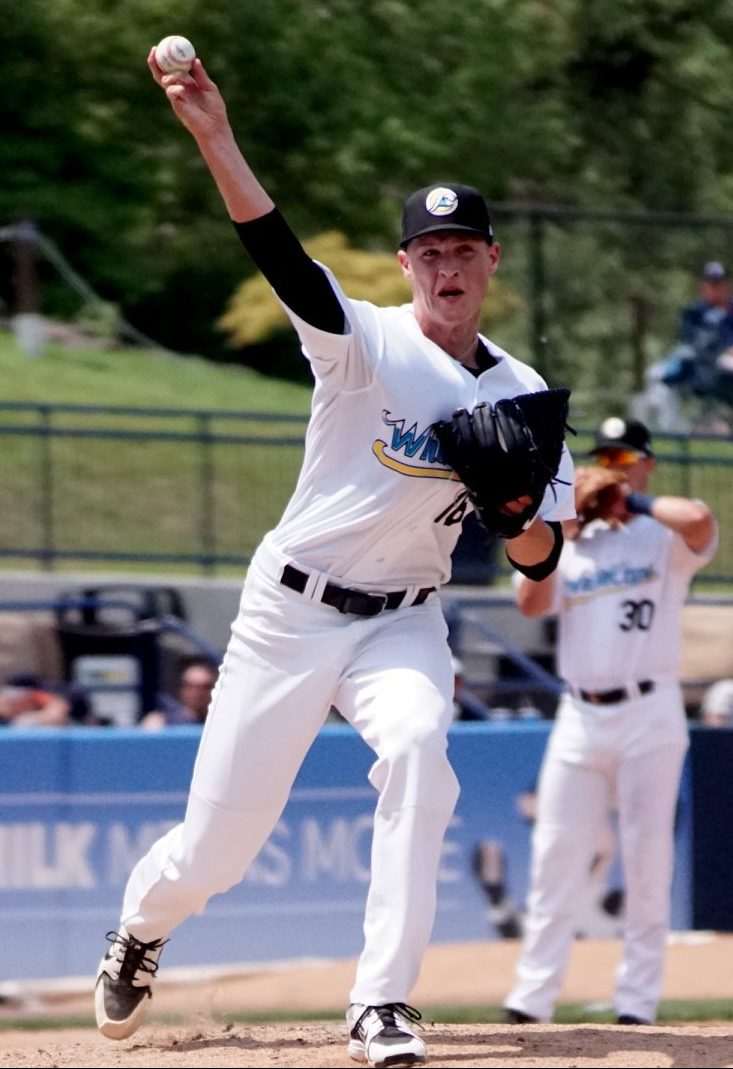 West Michigan’s Matt Manning makes a move back to first base. Photo/Leo Valdez