NORTON SHORES – Coming off a Saturday tilt in its season opener, the Mona Shores football team only had three days to prepare for

But that turned out to be more than enough time for the Sailors to take care of business.

Mona Shores scored on four of its first five possessions against the visiting Wolves, and forced Central into four turnovers in a 35-0 victory that featured a running clock throughout the second half.

Junior quarterback Caden Broersma, in just his second varsity start, was superb for the Sailors. He completed 13 of 16 passes for 187 yards and a touchdown – all in the first half – and also ran for 76 yards and another score.

“It was a short week, but we came out and worked hard for (the win),” said Broersma, a 6-foot-3, 206-pounder. “Offensively, I think we’ve shown we can score on any down, on any play. We have weapons all over the field and our defense has helped us out.”

Head coach Matt Koziak called his team’s first quarter “lights out,” after he watched the Sailors build a 21-0 lead. 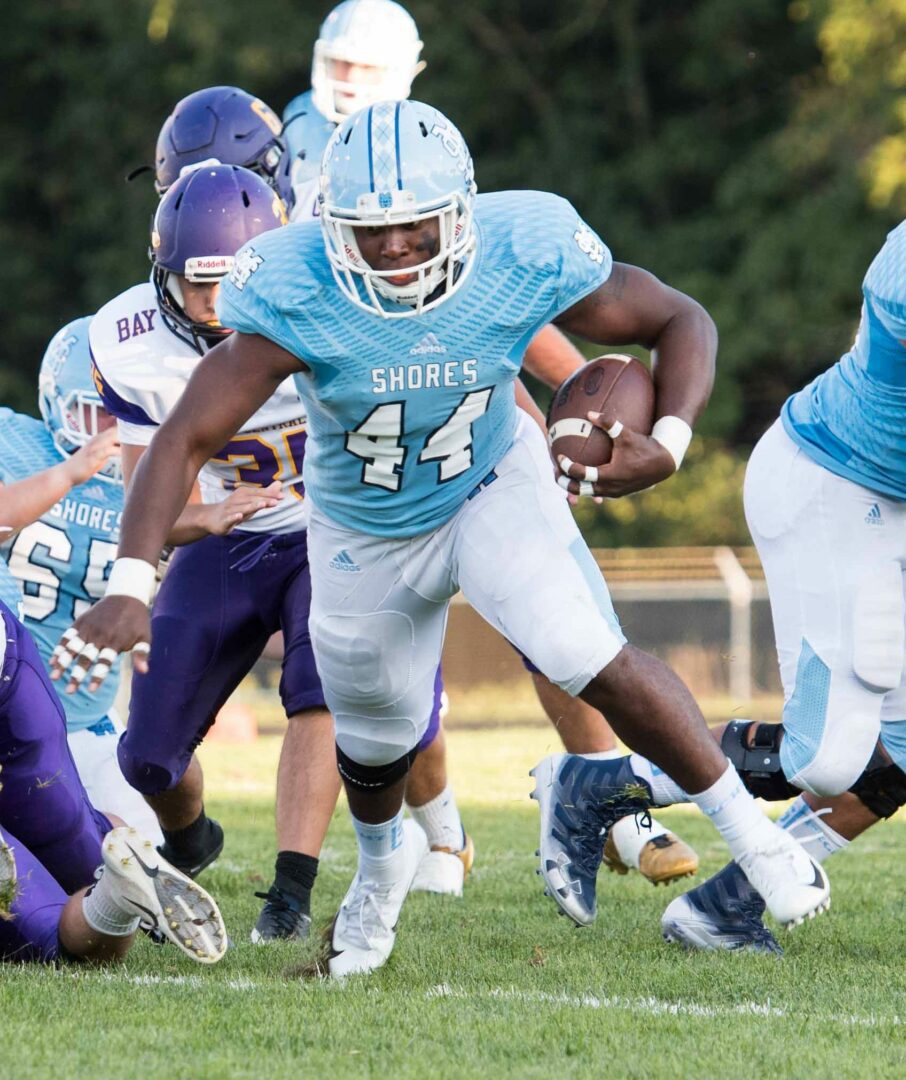 Sincere Dent break through on the ground attack for Mona Shores. Photo/Eric Sturr

Broersma started the onslaught with a 24-yard keeper for the game’s opening score nearly three minutes into the first quarter.

The Sailors added a 13-yard touchdown run by senior Sincere Dent, who went untouched on a run off right tackle, and Broersma connected with a wide-open Keondre Pierce for a 35-yard touchdown pass.

Dent, who had five touchdowns in a Week 1 victory over East Kentwood, added three more on Thursday, along with 73 rushing yards on just nine carries.

Dent plowed into the end zone on a two-yard run on the first play of the second quarter to put the Sailors up 28-0.

The positive momentum came unglued over the next eight minutes, however, when the game turned into a flag-fest for both teams.

“We’ll get together and watch some film and get some things corrected,” Broersma said about the penalties.

An impressive interception and 20-yard return by junior safety Kolbe Trovinger with 1:45 left in the half helped set up the Sailors’ final scoring drive, which ended with a one-yard plunge by Dent with 19 seconds remaining.

A shovel pass to senior Jacob Wahlberg on the ensuing 2-point conversion put the Sailors up 35-0, which forced the running clock in the second half.

“We were hoping to jump out on them and get some rest for some of our kids,” Koziak admitted. “We had quite a few kids who were still sore from Saturday. I thought it was big that we scored right before the half. We knew were going to go just one series with our starters offensively and defensively in the second half and get our reserves in.”

Senior receiver James Gilbert had six catches for 91 yards for the Sailors. He outproduced his counterpart at Bay City Central, Division 1 prospect Devell Washington, who had five catches for 32 yards.

Defensive linemen Josh Hill had a sack for the Sailors’ defense, which secured its first shutout since a 65-0 whipping of Grand Rapids Union on Oct. 6 last season. 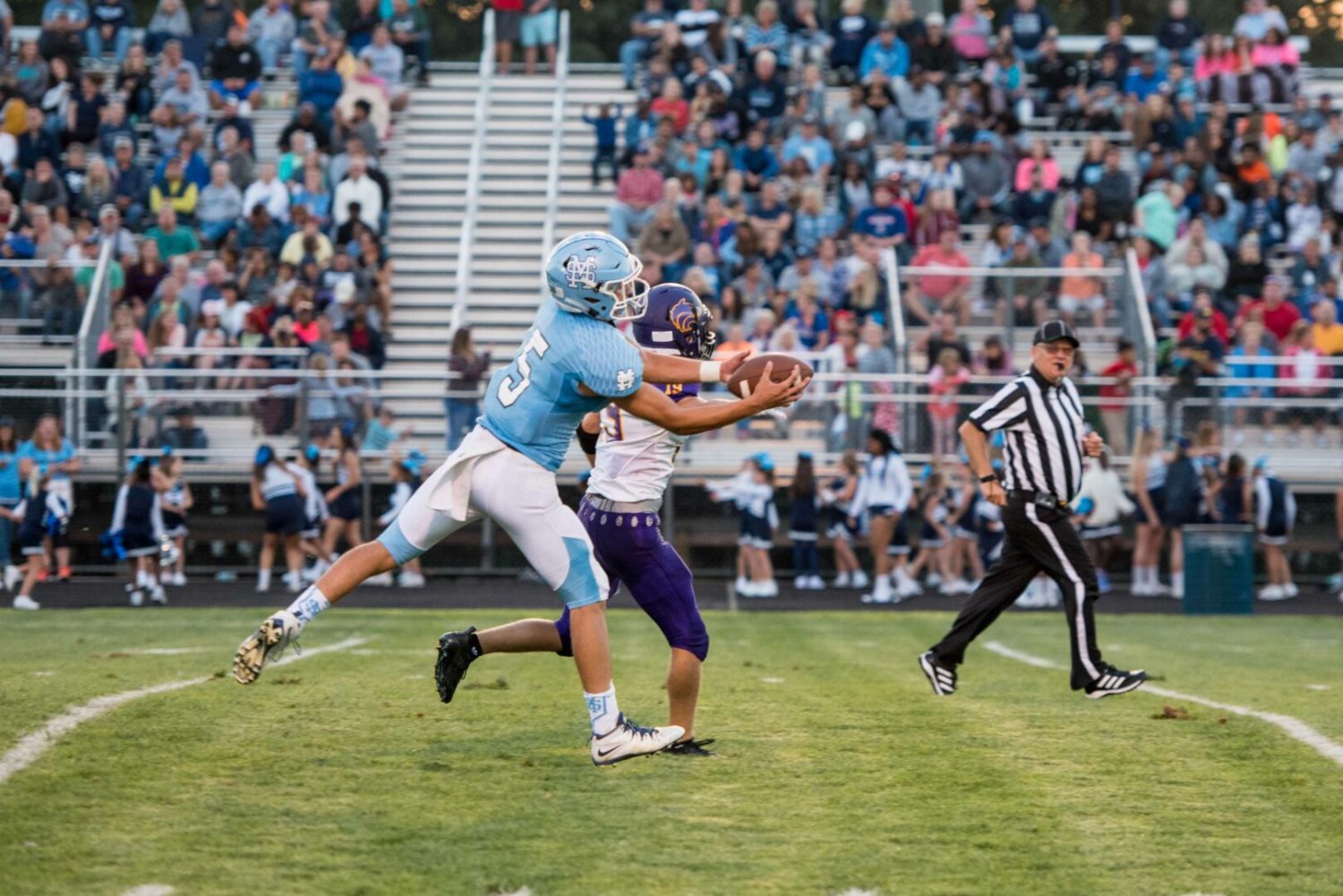 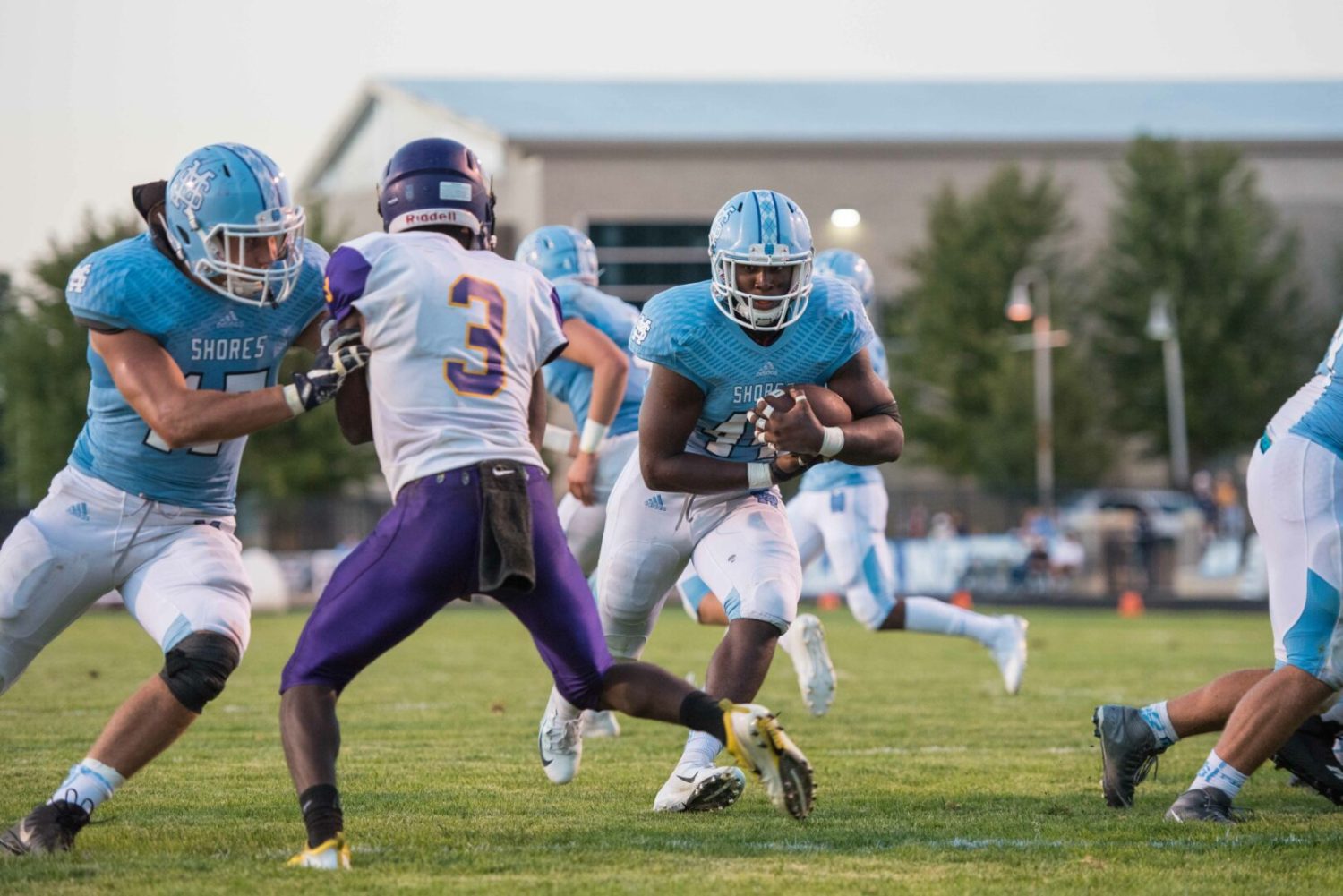 Sincere Dent eyes the endzone on his way to another Shores touchdown. (photo/Eric Sturr) 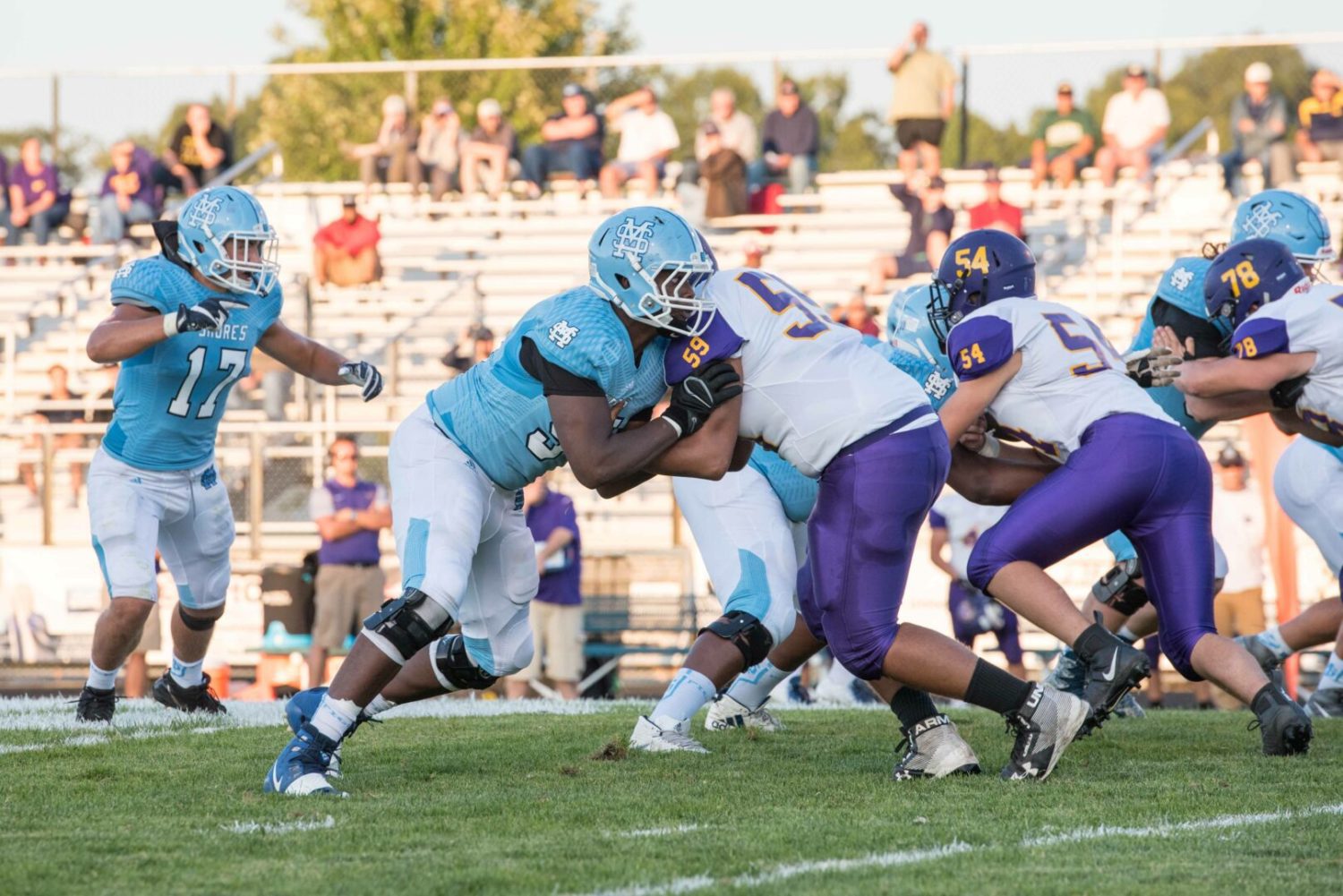 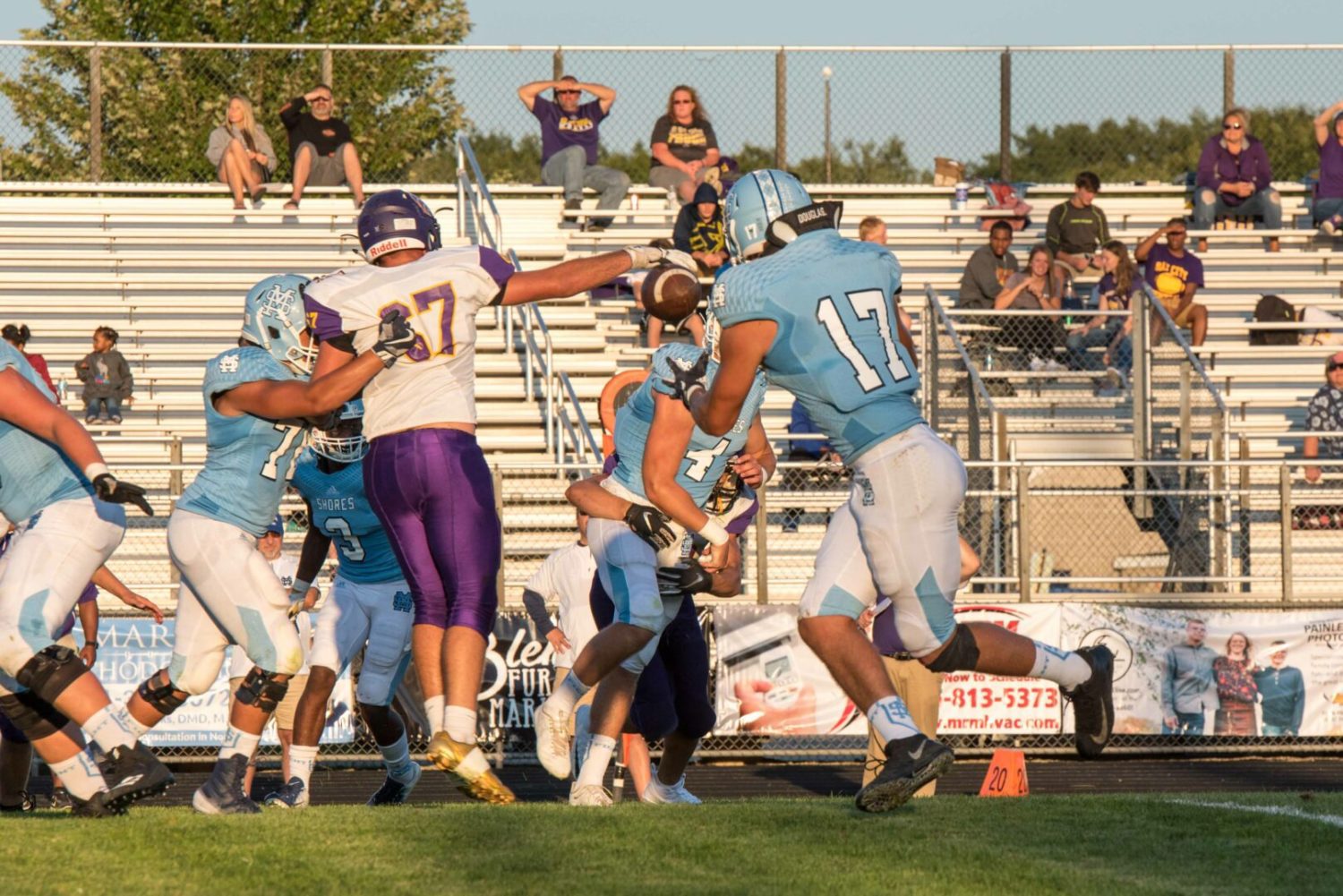 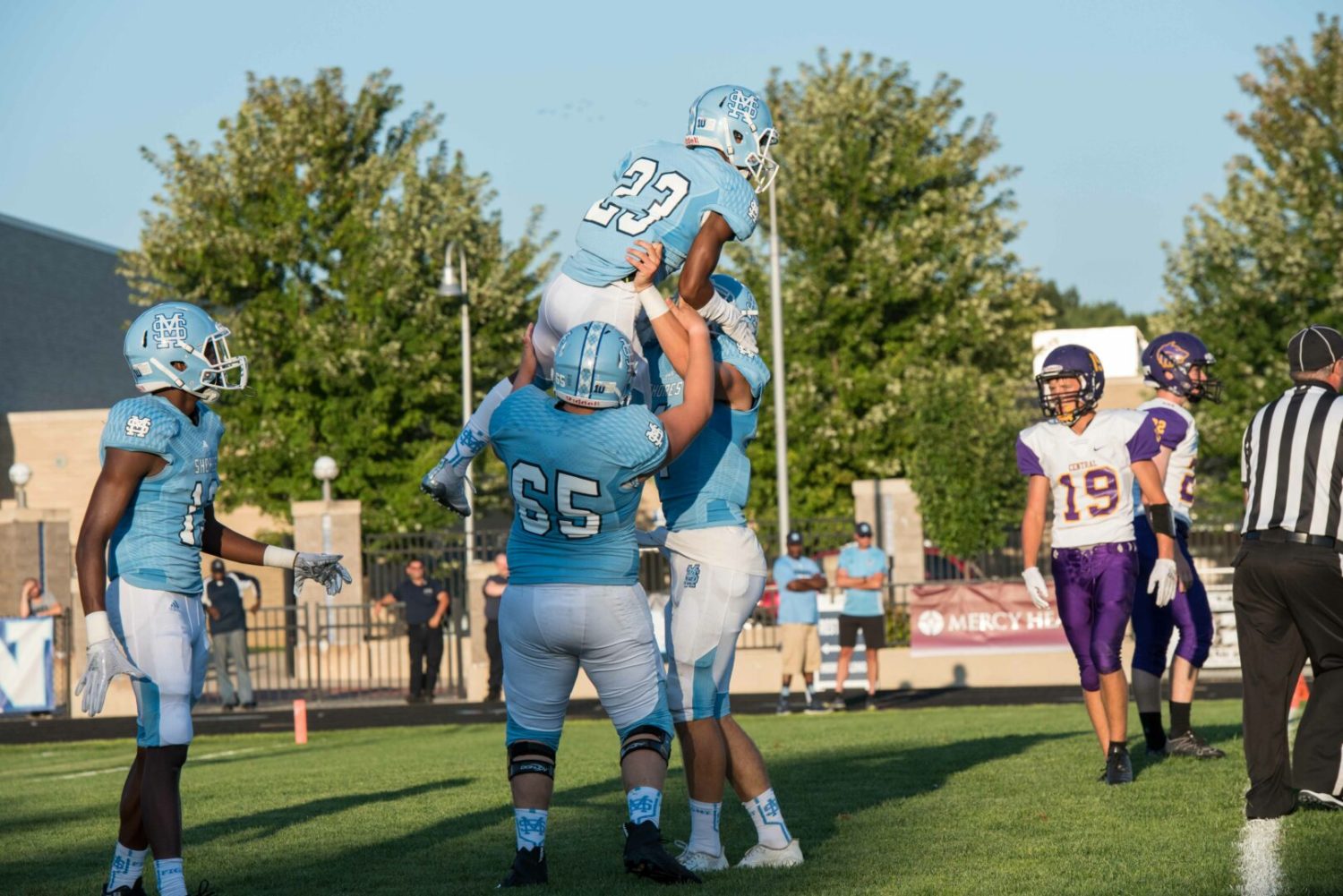 Caden Broersma and Carter Peliotes (65) lift Keondre Pierce (23) after he scores on a pass from Broersma. (photo/Eric Sturr) 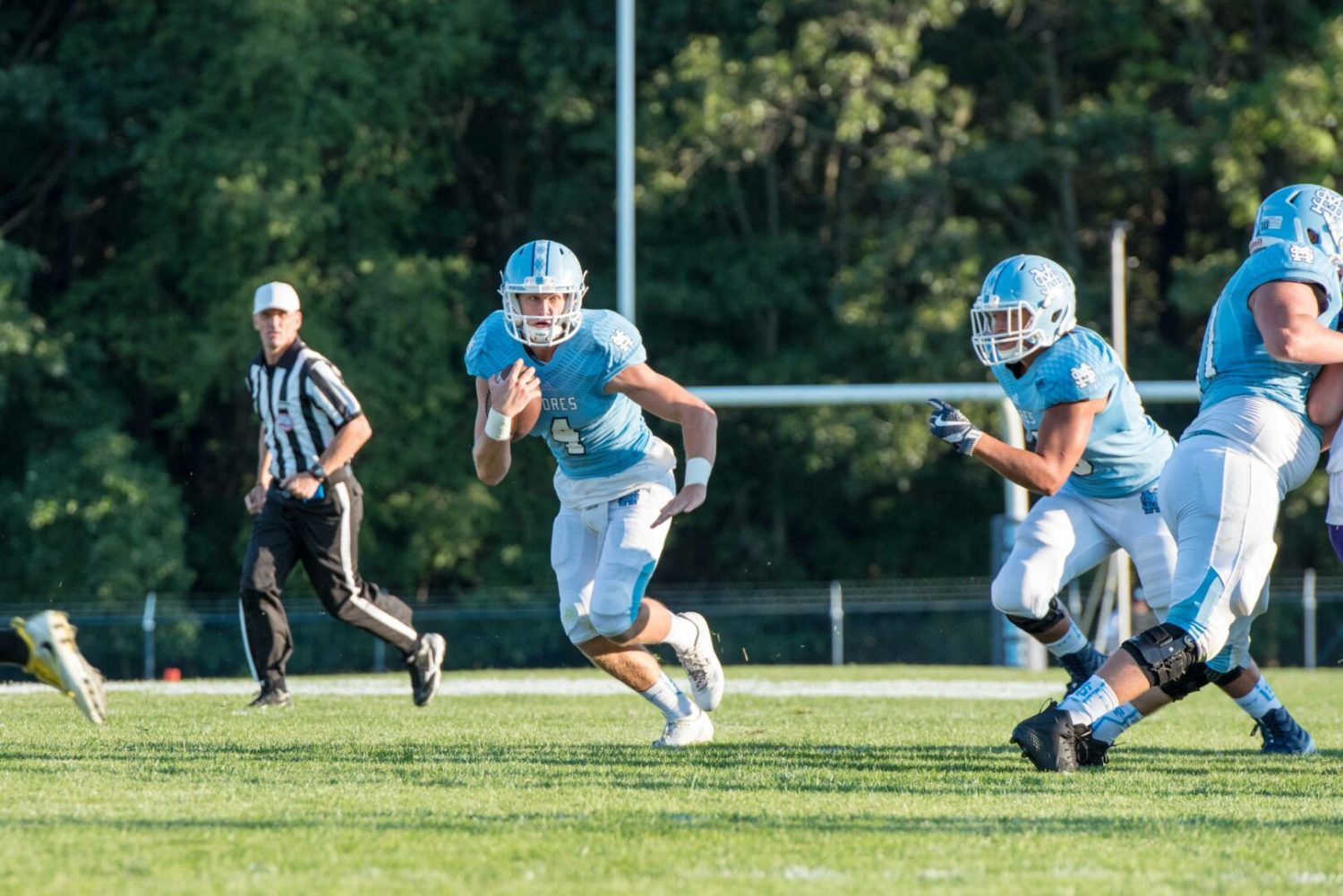 Caden Broersma looks for daylight as he takes the ball up the middle. (photo/Eric Sturr) 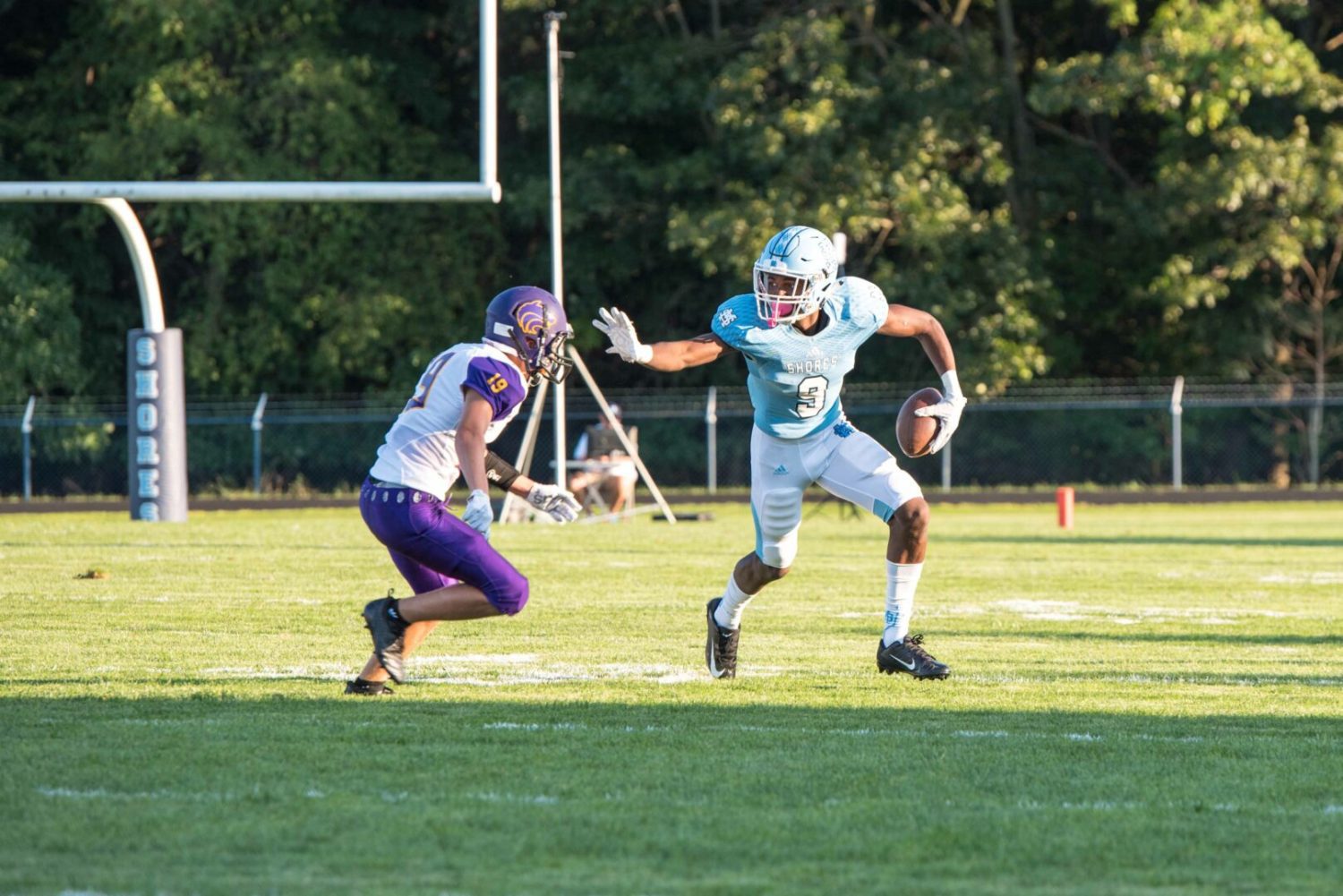 Whitecaps fall to Lansing to close out the weekend, lose Hill for the season